Acanthocyclops americanus (Marsh, 1892), first described in Wisconsin (USA), was discovered shortly thereafter in Great Britain and then widely distributed in the Palearctic. Its current range includes Europe, North Africa, western and central Siberia with the largest number of findings along the migration tracks of aquatic birds. Until recently, the northern border was the 60th parallel, but in the last decade it has expanded further into the Arctic. The most rapid expansion of its range in Europe happened in the middle of the last century, which was partially hidden from scientists due to a taxonomic mistake caused by the merging of its name with the native Palearctic form Acanthocyclops robustus (Sars, 1863). This problem was solved only recently with the help of molecular genetic tools, allowing a return to the study of biological, anthropogenic and possible climate-dependent mechanisms of the successful rapid invasion of A. americanus into the Palearctic. This paper, along with a detailed description of the life cycle parameters, adaptive behavior of nauplii and population dynamics in Acanthocyclops americanus compared to those in two other native Acanthocyclops species (Acanthocyclops vernalis and A. robustus), provides a possible history of the biological invasion of A. americanus in the Palearctic. Special attention is paid to the climate-dependent mechanism of the expansion of its range into the north and far east of Asia. The introduction of the A.americanus into small lakes in Great Britain resulted in the dominance of this species in the summer plankton. In many high-trophic reservoirs in Belgium, France and Spain, as well as in newly built reservoirs in Europe, this species has become the only representative of crustacean zooplankton in the warm season. This has led to a significant transformation of the trophic webs of these reservoirs. The rapid dispersal of the invasive species, which was demonstrated by A. americanus in the last century, can make it difficult, and in some cases even impossible to study the historical reasons for the formation of the fauna of other invertebrates associated with such events including the movement of continents and the evolution of the Tethys Sea. View Full-Text
Keywords: dormancy; reactivation; biogeography; climate change; biological invasion dormancy; reactivation; biogeography; climate change; biological invasion
►▼ Show Figures 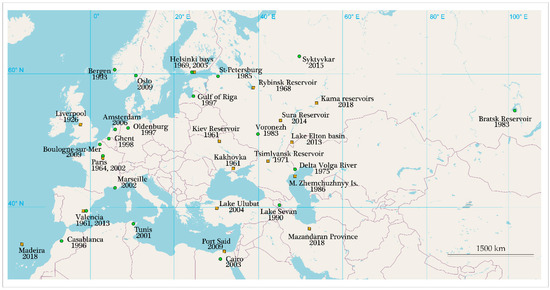