Formaldehyde (FA) is an extremely active compound that is widely used in numerous applications. Given that FA is a known carcinogen, it is essential to remove it from the environment. Titanium dioxide (TiO2), due to its special physicochemical properties, is a promising adsorbent for the removal of specific organic compounds from aqueous solutions. In this study, the interaction of TiO2 with FA in the presence and absence of quartz sand, the most common mineral on the Earth’s surface, was investigated under static and dynamic (batch) conditions, at 25 °C. The experimental data suggested that the sorption of FA onto TiO2 can be described adequately by a pseudo-second order kinetic model, indicating that the main sorption mechanism was chemisorption. It was observed that the combination of TiO2 and quartz sand could1 lead up to effective removal of FA from aqueous samples. View Full-Text
Keywords: titanium dioxide; formaldehyde; quartz sand; sorption titanium dioxide; formaldehyde; quartz sand; sorption
►▼ Show Figures 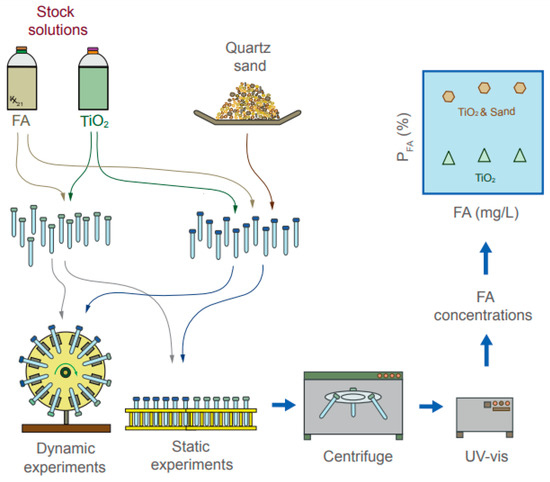