Performance of a Handheld Chlorophyll-a Fluorometer: Potential Use for Rapid Algae Monitoring
Next Article in Special Issue

Sustainable Management, Conservation, and Restoration of the Amazon River Delta and Amazon-Influenced Guianas Coast: A Review

The Effect of Phragmites australis Dieback on Channel Sedimentation in the Mississippi River Delta: A Conceptual Modeling Study

Phragmites australis is a globally distributed wetland plant. At the mouth of the Mississippi River, P. australis on natural levees of the network of distributary channels appears to increase the flow in the deep draft navigation channel, which, in turn, may reduce the sedimentation and benefit the navigation dredging. For several years, P. australis has been dying in the Mississippi River’s Bird’s Foot Delta, which appears to be shortening the distributary channels and increasing the lateral flow from the remaining portions. A conceptual model based on D-FLOW FM was applied to calculate channel sedimentation in a series of idealized deltaic systems to predict the consequences of P. australis dieback and other factors that diminish the delta complexity, such as sea-level rise and subsidence, on sedimentation in the distributary channels. Channel complexity in each system, which was quantified with an index ranging from 0 to 10 that we developed. Model results indicate that sedimentation was insensitive to the channel complexity in simple deltas but was sensitive to the channel complexity in complex deltas, such as the current Mississippi River Delta with extensive P. australis. Channel sedimentation remains stable from 0 until the channel complexity index reaches 6. In more complex deltas, the sedimentation decreases rapidly as the channel complexity increases. The sedimentation is also affected by waves, river discharge, sediment concentration, grain sizes, and bed level. River managers in Louisiana may benefit from new models based on bathymetric data throughout the Bird’s Foot Delta; data on the effects of the P. australis belowground biomass on bank erodibility across a range of current velocities; and data on the effects of P. australis stem density, diameter, and height on the lateral flow across a range of river stages and tidal stages to help them decide how much to respond to Phragmites dieback. Options include increased navigation dredging, increased restoration of the channel complexity via a thin layer of sediment deposition on natural levees and the planting of more salt-tolerant vegetation on natural levees. View Full-Text
Keywords: river delta; sedimentation; complexity; Phragmites; D-Flow FM river delta; sedimentation; complexity; Phragmites; D-Flow FM
►▼ Show Figures 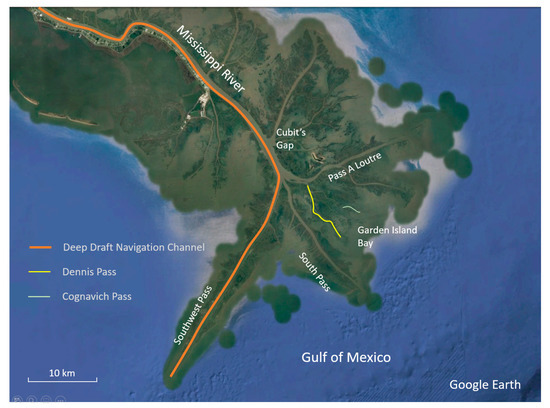