Timescale Methods for Simplifying, Understanding and Modeling Biophysical and Water Quality Processes in Coastal Aquatic Ecosystems: A Review
Next Article in Special Issue

Anthropization and Climate Change: Impact on the Discharges of Forest Watersheds in Central Africa

Climate change and anthropization are major drivers of river flows variability. However, understanding their simultaneous impact on discharges is limited. As a contribution to address this limitation, the objective of this study is to assess the impact of climate change and anthropization on the discharges of two watersheds of Central Africa (Nyong and Ntem) over a recent period. For this, the hydropluviometric data of the watersheds concerned were analyzed using the Pettitt test. Similarly, the dynamics of the main land use modes (LUM) have been assessed, through classifications obtained from the processing of Landsat satellite images of the watersheds studied on two dates. The results of this study show that in Central Africa, annual discharges have decreased significantly since the 1970s, and yet the decline in annual rainfall does not become significant until the 2000s. The discharges of the rainy seasons (spring and autumn) recorded the most important changes, following variations in the rainfall patterns of the dry seasons (winter and summer) that precede them. Winters experienced a significant decrease in precipitation between the 1970s and 1990s, which caused a drop in spring flows. Their rise, which began in the 2000s, is also accompanied by an increase in spring flows, which nevertheless seems rather slight in the case of the Nyong. Conversely, between the 1970s and 1990s, there was a joint increase in summer rainfall and autumn flows. A decrease of summer rainfall was noted since the 2000s, and is also noticeable in autumn flows. Maximum flows have remained constant on the Nyong despite the slight drop in rainfall. This seems to be the consequence of changes in land use patterns (diminution of forest and increasing of impervious areas). The decrease in maximums flows noted on the Ntem could be linked to the slight drop in precipitation during the rainy seasons that generates it. Factors such as the general decrease in precipitation during the winter and the reduction in the area occupied by water bodies could justify the decrease in minimum flows observed in the two watersheds. These findings would be vital to enhance water management capabilities in the watersheds concerned and in the region. They can also give some new elements to study and understand the seasonal variation and fresh water availability in downstream, estuaries and coastal areas of the regional rivers. View Full-Text
Keywords: climate change; urbanization; impervious area; Cameroon; runoff climate change; urbanization; impervious area; Cameroon; runoff
►▼ Show Figures 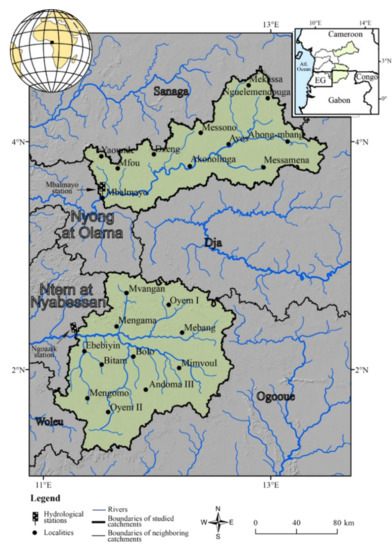