The Future of Drought in the Southeastern U.S.: Projections from Downscaled CMIP5 Models
Previous Article in Journal

In Gaur et al. [16] future flow projections were made for the entire Canadian landmass at ~25 km spatial resolution by adopting an approach used in previous studies at other locations [20,22]. A large ensemble of runoff projections from 21 GCMs were used to obtain flood characteristics across Canada under four different Representative Concentration Pathways (RCPs): RCP 2.6, RCP 4.5, RCP 6.0, and RCP 8.5 [31] for historical (1961–2005) and future (2061–2100) timelines. The projected future changes in flooding frequencies of historical 100 year and 250 year return period events were calculated along with the changes in the timing of the floods. The results were discussed in terms of the aggregated projected changes and associated uncertainty contributed by different GCMs.
The aggregation of the projected changes for a particular RCP was performed using two approaches: (1) all GCM median approach where median of the changes projected by all GCMs was considered as the aggregated change, and (2) robust GCM median approach where median of the projected changes made only by the robust GCMs was considered as the aggregated change. When applying the robust GCM median approach to aggregate projected flooding frequency changes, robust projections were considered as the ones whose projected sign of change was concurred upon by more than 50% (or the majority) of the GCMs. In the case of flood timing, the robust projections were considered as the ones whose month of flood timing was concurred upon by more than 50% of the GCMs considered. More details on the methodology used to prepare the aggregated projections can be obtained from Gaur et al. [16].
In this study, the aggregated results from Gaur et al. [16] are used to investigate the flooding related consequences of climate change on 100 most populous Canadian cities and 1072 Flow Regulation Infrastructure (FRI) located in Canada.

CaMa-Flood [22,24,32] is a global scale distributed hydrodynamic model that routes input runoff generated by a land surface model to oceans or inland seas along a prescribed river network map. Water storage is calculated at every time-step, whereas variables such as: water level, inundated area, river discharge, and flow velocity, are diagnosed from the calculated water storage. River discharge and flow velocity are estimated using local inertial equation. Floodplain inundation is modelled by taking into consideration sub-grid scale variabilities in river channel and floodplain topography. A river channel reservoir has three parameters: channel length (L), channel width (W), and bank height (B). The floodplain reservoir has a parameter for unit catchment area (Ac), and a floodplain elevation profile which describes floodplain water depth Df as a function of flooded area Af. The topography related parameters i.e., surface altitude (Z), distance to downstream cell (X), and unit catchment area (Ac) that are calculated using the Flexible Location of Waterways (FLOW) method [32]. Finally, a Manning’s roughness coefficient parameter (n) is used to represent the roughness in the river channel.
The CaMa-Flood model has been validated extensively for its ability to simulate runoff in some of the largest catchments of the globe including the Amazon, Mississippi, Parana, Niger, Congo, Ob, Ganges, Lena, and Mekong [22,24,33]. Given the high credibility of the model in simulating river flow and flood inundation dynamics, the model has been used to assess the impacts of climate change at regional to global scales [19,20,33,34,35,36]. This study uses the globally calibrated version of Cama-Flood model that was used to generate global scale runoff projections in Hirabayashi et al. [20].

The projected future changes in flood risk are calculated for the Canadian cities by combining the projected future changes in flood hazard and population exposed to flooding at the selected cities. Flood hazard is expressed as a function of the magnitude of the projected changes in the flooding frequencies at the city locations. The population exposed to flooding is calculated from flooded area estimates obtained from the results of a retrospective CaMa-Flood simulation.

The total population exposed to flooding is calculated by performing a retrospective simulation of CaMa-Flood following previous studies [20,25]. Following steps are performed:

The Flow Regulation Infrastructure (FRI) are sensitive to both the magnitudes and timings of flooding events. Therefore, projected changes in both these aspects of flooding are discussed to highlight changing flood hazard at FRIs located in Canada.

Canada is the second largest country in the world with a total land mass of ~10 million square kilometers. It is part of North America and consists of ten provinces and three territories: Yukon (YK), Northwest Territories (NT), Nunavut (NV), British Columbia (BC), Alberta (AB), Saskatchewan (SK), Manitoba (MB), Ontario (ON), Quebec (QB), Newfoundland and Labrador (NL), New Brunswick (NB), Nova Scotia (NS), and Prince Edward Island (PEI), as shown in Figure 1.
The list of 100 most populous cities and their population for the year 2015 is obtained from Statistics Canada (https://www.statcan.gc.ca/eng/start). The location of flow regulation infrastructure is obtained from the HYDAT flow database maintained by the Environment and Climate Change Canada (EC Data Explorer 2016). In the HYDAT database, 1072 FRIs have been identified. The distribution of these locations across Canada is shown in Figure 1.

This study discussed the flooding related consequences of climate change on 100 most populous Canadian cities and Flow Regulation Infrastructure (FRIs) located in Canada. The aggregated results of future projected changes in flooding frequencies of historical 100 and 250 year flooding events, and changes in flood timing generated discussed in Gaur et al. [16] are used as the basis for the discussion presented in this study. Two different approaches were used to aggregate the projected changes: (1) all GCM median approach where changes projected by all GCMs (for a particular RCP) were taken into consideration and their median is calculated as the aggregated value, and (2) robust GCM median approach where changes projected by robust GCMs were considered for aggregation. More details on the procedure used to calculate the aggregated results can be obtained from Gaur et al. [16].
The projected changes from both aggregation approaches are used to assess changes in future flooding frequencies at the cities, and calculate flood hazard indices and flood risk indices to evaluate flooding related consequences of climate change on the cities. Overall, it is obtained that 40–60% of the cities are projected with increasing flooding frequencies in the future. The number of cities projected with increasing flooding frequencies, increased flood hazard index, and increased flood risk was found to be greatest under the more intense emission scenarios: RCP 6.0 and RCP 8.5 than the conservative scenarios: RCP 2.6 and RCP 4.5. In terms of chosen hazard and risk indices, it is especially noted that many cities located in southern Ontario such as Sault Ste. Marie, Nanticoke, Cornwall etc. are associated with very high flood hazard whereas other highly populated cities such as Toronto, Montreal, and Saint Catharines-Niagara are associated with the highest flood risk. Some heavily populated cities such as Ottawa and Edmonton have also been projected with future increases in flooding frequencies, decreasing flood hazard and flood risk. Large uncertainty in the sign of change as contributed by differences in RCPs is also evident in the results for some cities such as Vancouver, Quebec etc.
The flooding related consequences of climate change on FRIs are evaluated in terms of the projected changes in flooding frequencies and flood timing at their locations. Results indicate that overall 40–50% FRIs especially those located in the south-western Ontario, west coast, and northern regions of Canada can experience future increases in flooding frequencies as a consequence of climate change. The FRIs projected to experience the largest increases in flooding frequencies are found to be located in the prairies provinces such as Saskatchewan, Manitoba and Alberta, northern provinces such as Nunavut, and Ontario. In terms of flood timing, the projected results were found to differ considerably between the two aggregation approaches where the results from robust GCM median approach allocated uncertain flood timing in a larger number of FRIs. However from both the aggregation approaches, a larger number of FRIs especially those located in the southern Ontario, southern prairies, and along the western coast of Canada were found to be projected with a change in flood timing under more extreme emission scenarios: RCP 6.0 and RCP 8.5 than low and moderate emission scenarios: RCP 2.6 and RCP 4.5.
It is also worth pointing out some of the limitations and future work of this study. The results discussed in this study are based on the aggregated projections from multiple GCMs and no attempt has been made to evaluate the reliability of runoff projections made by them. However, in line with the recommendations made in previous studies (such as Knutti et al. [39]), a very large ensemble of future runoff projections have been used for analysis so that the recommendations made are robust given the limitations and uncertainty in making future projections of runoff. The estimation of flood quantiles for historical and projected future time-periods has been made considering that flooding behavior is stationary within the two time-periods however extreme value distribution methods accounting for non-stationarity exist [40] and can be used in future studies to further validate the findings of this study. Furthermore, this study only evaluates hazards and risks originating from riverine floods. Other categories of floods originating in the coastal areas due to tidal effects and sea-level rise, short duration extreme precipitation, ice-jams, and tsunamis have not been considered. Concurrency of some of these flood generating mechanisms have the potential to generate much larger flood hazard than that discussed in this study. Nevertheless, the results discussed in this paper provide novel information that will help water resource managers and policy makers to more effectively manage Canadian cities and water resource management infrastructure in Canada.

Funding for this research came from Chaucer Syndicates (London, UK) and the Natural Sciences and Engineering Research Council of Canada (NSERC).

Authors acknowledge the financial support of Chaucer Syndicates (London, UK) and Natural Sciences and Engineering Research Council of Canada (NSERC) through the collaborative research grant awarded to the last author. 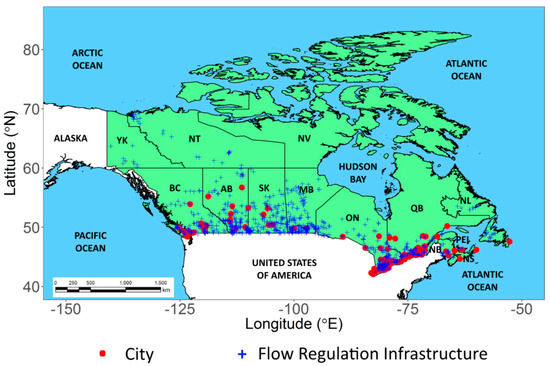 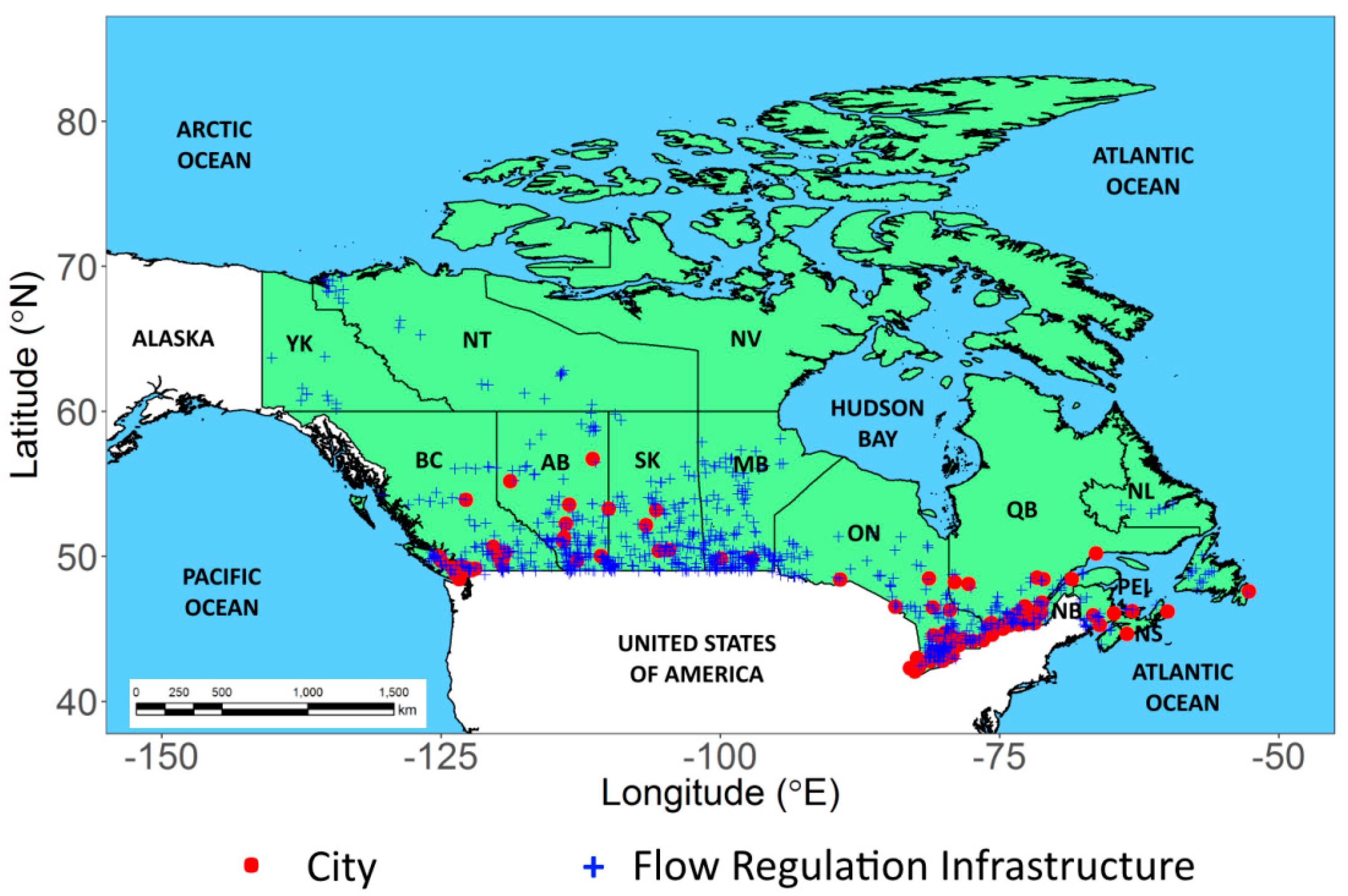 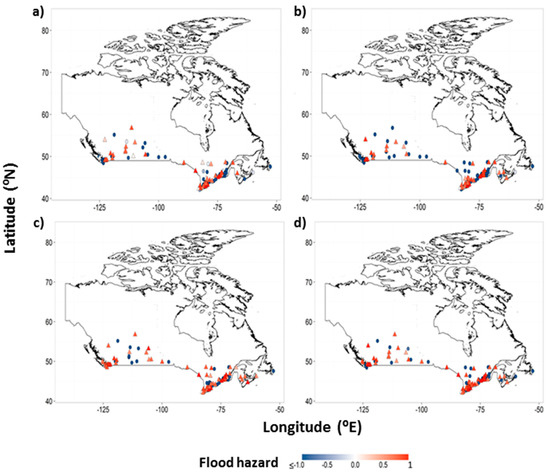 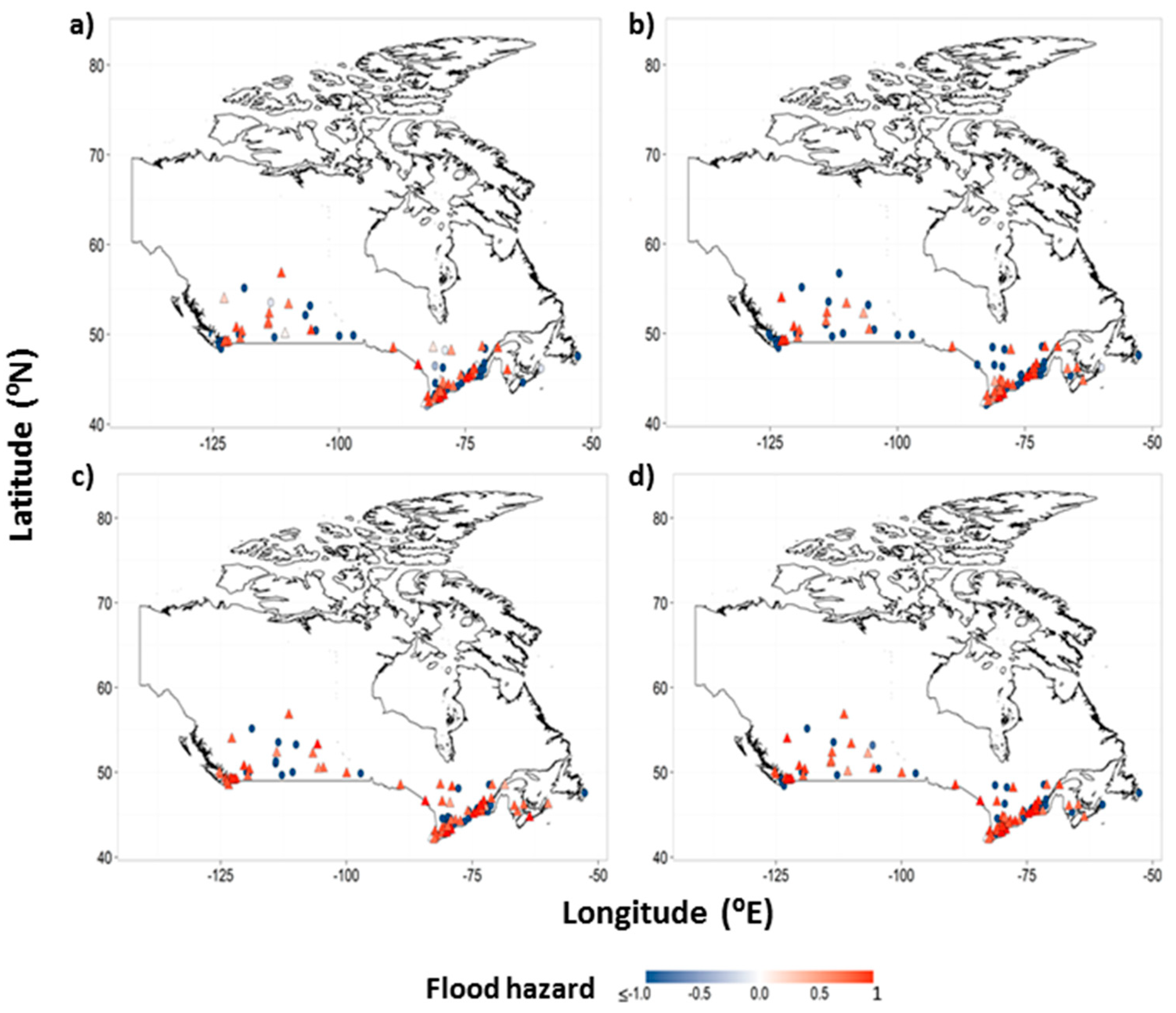 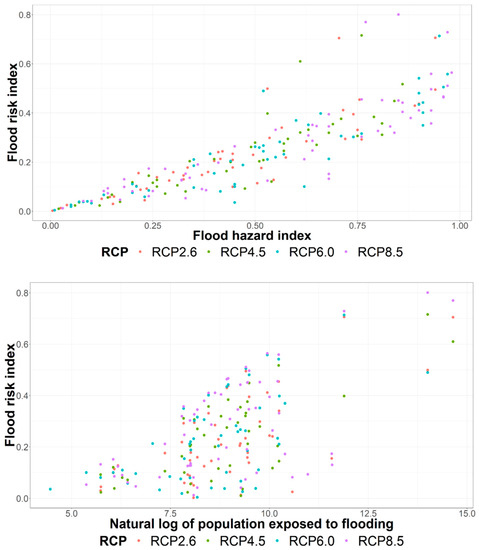 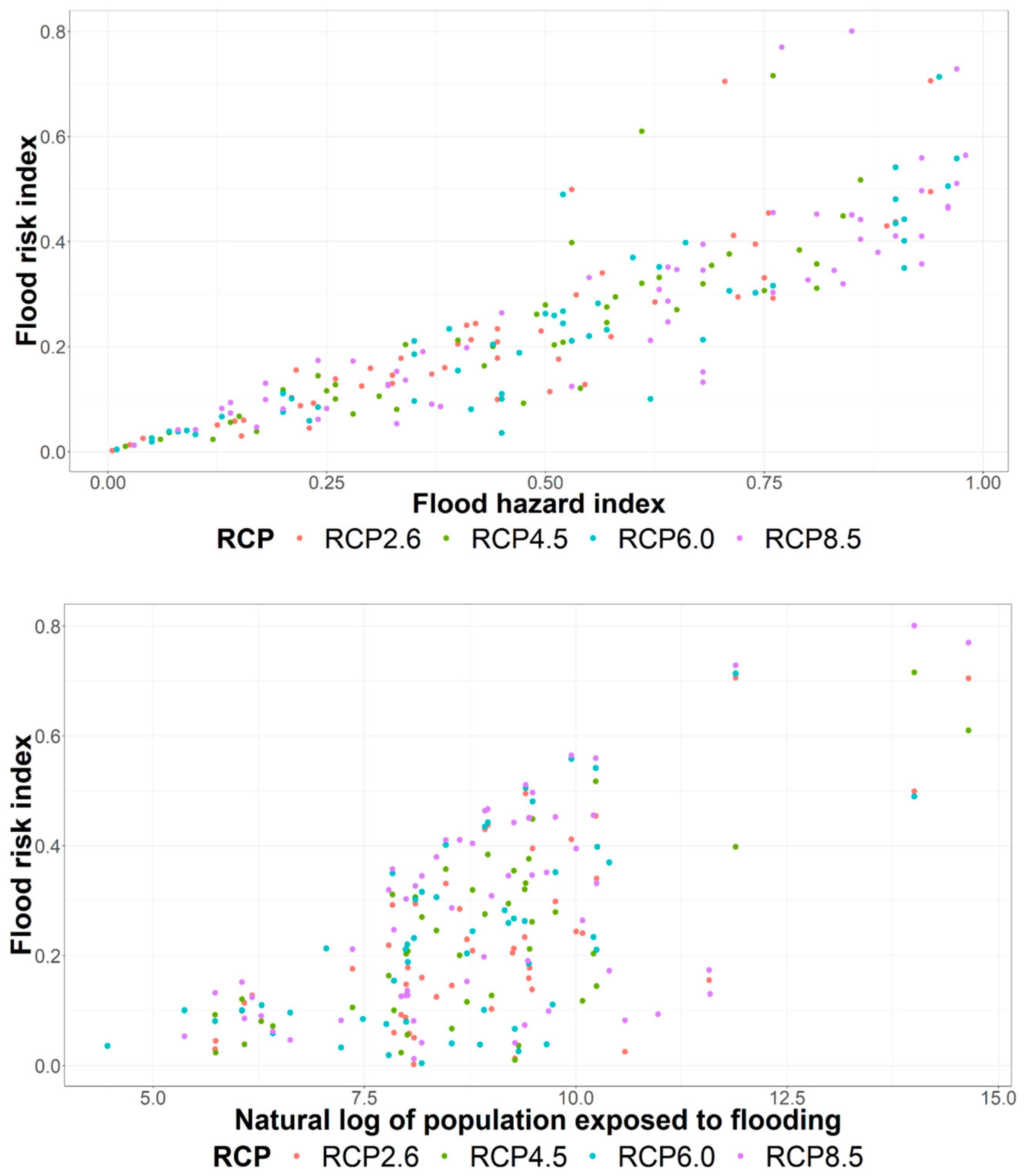 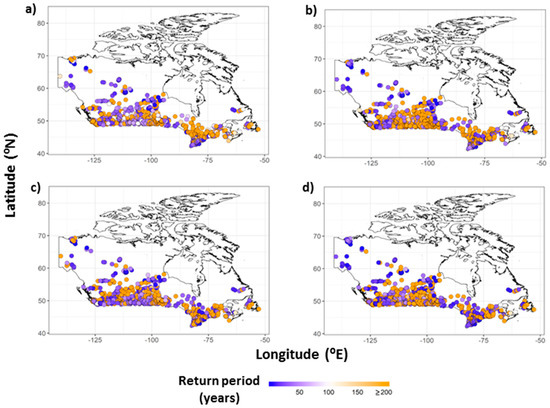 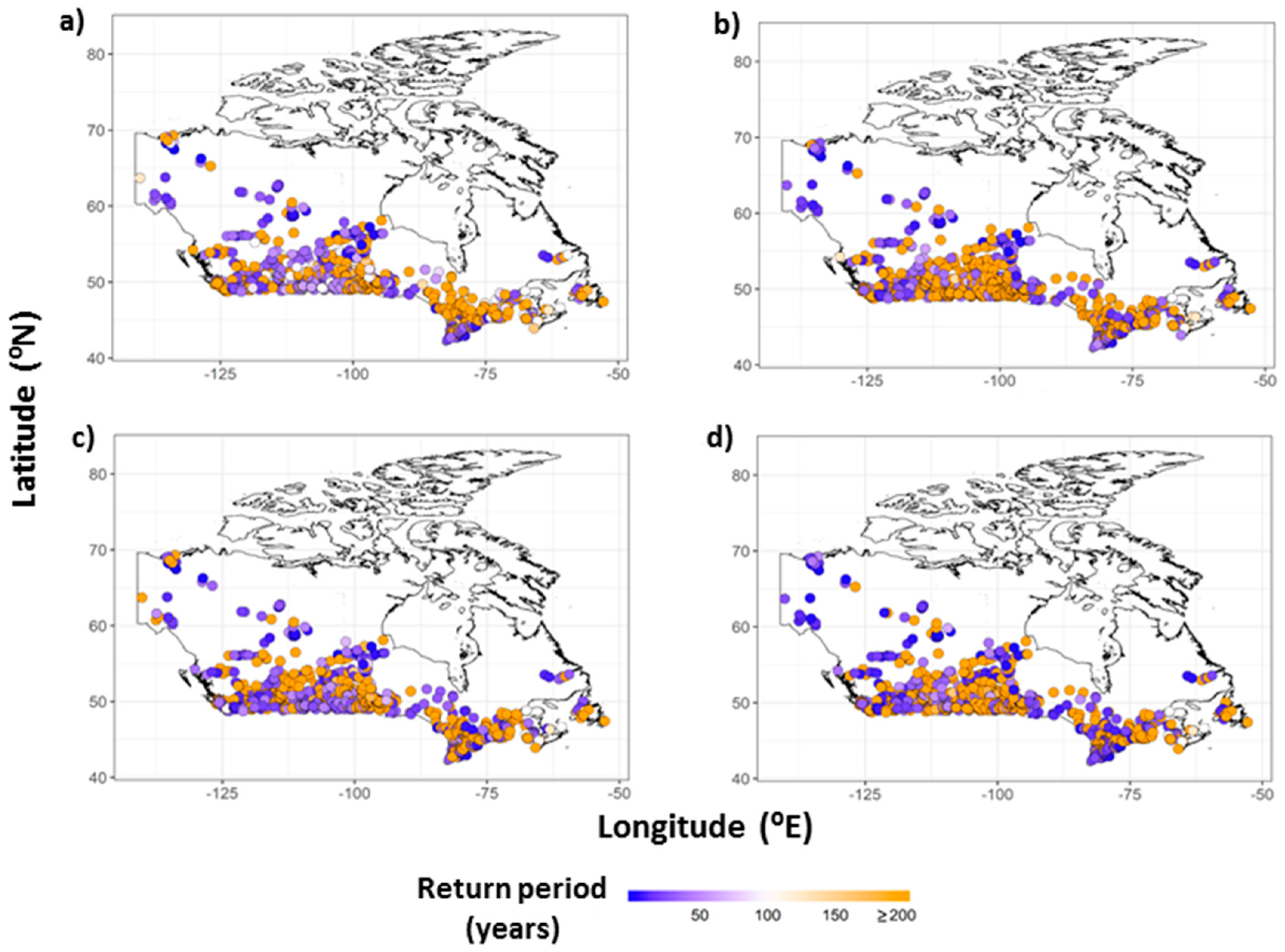 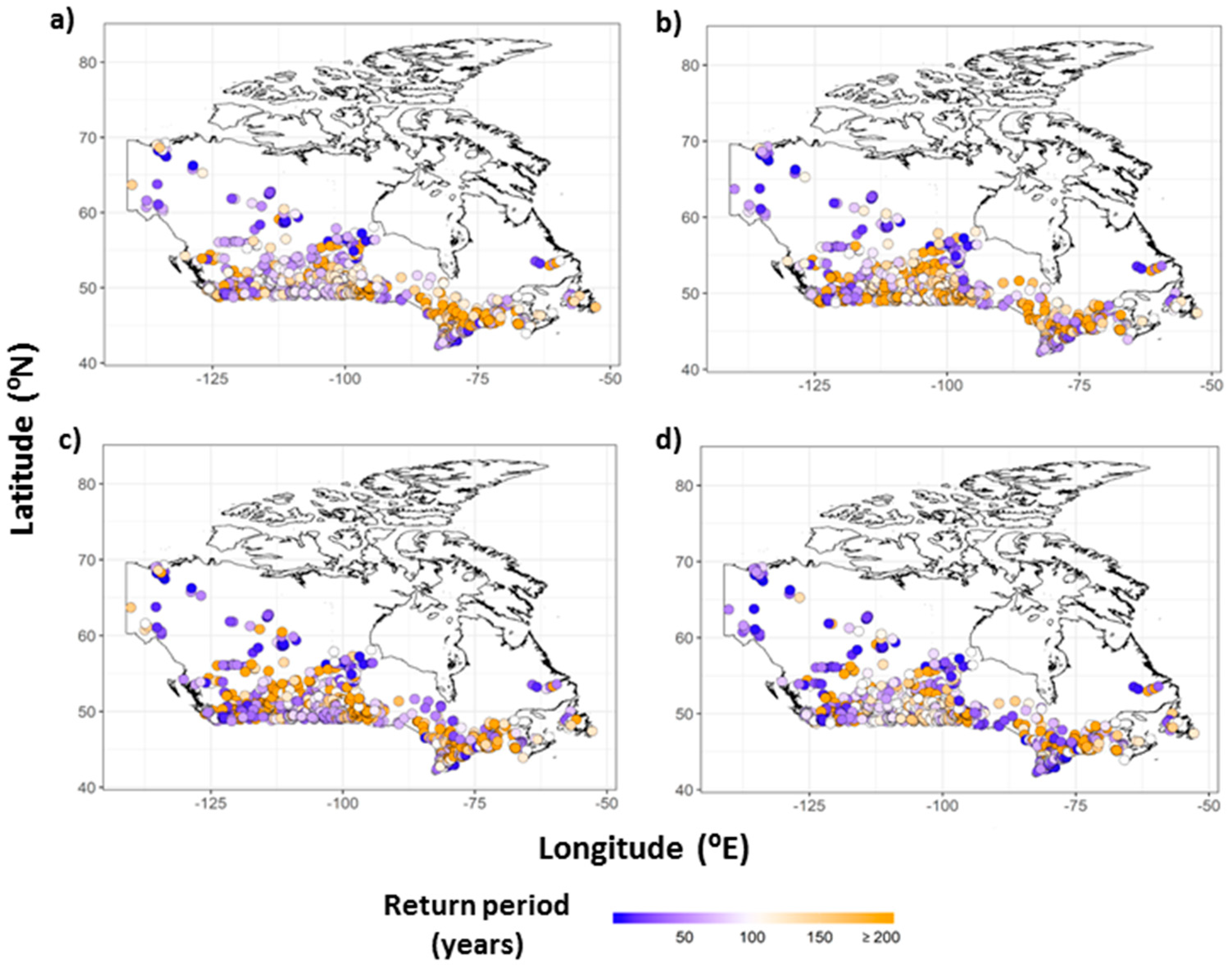 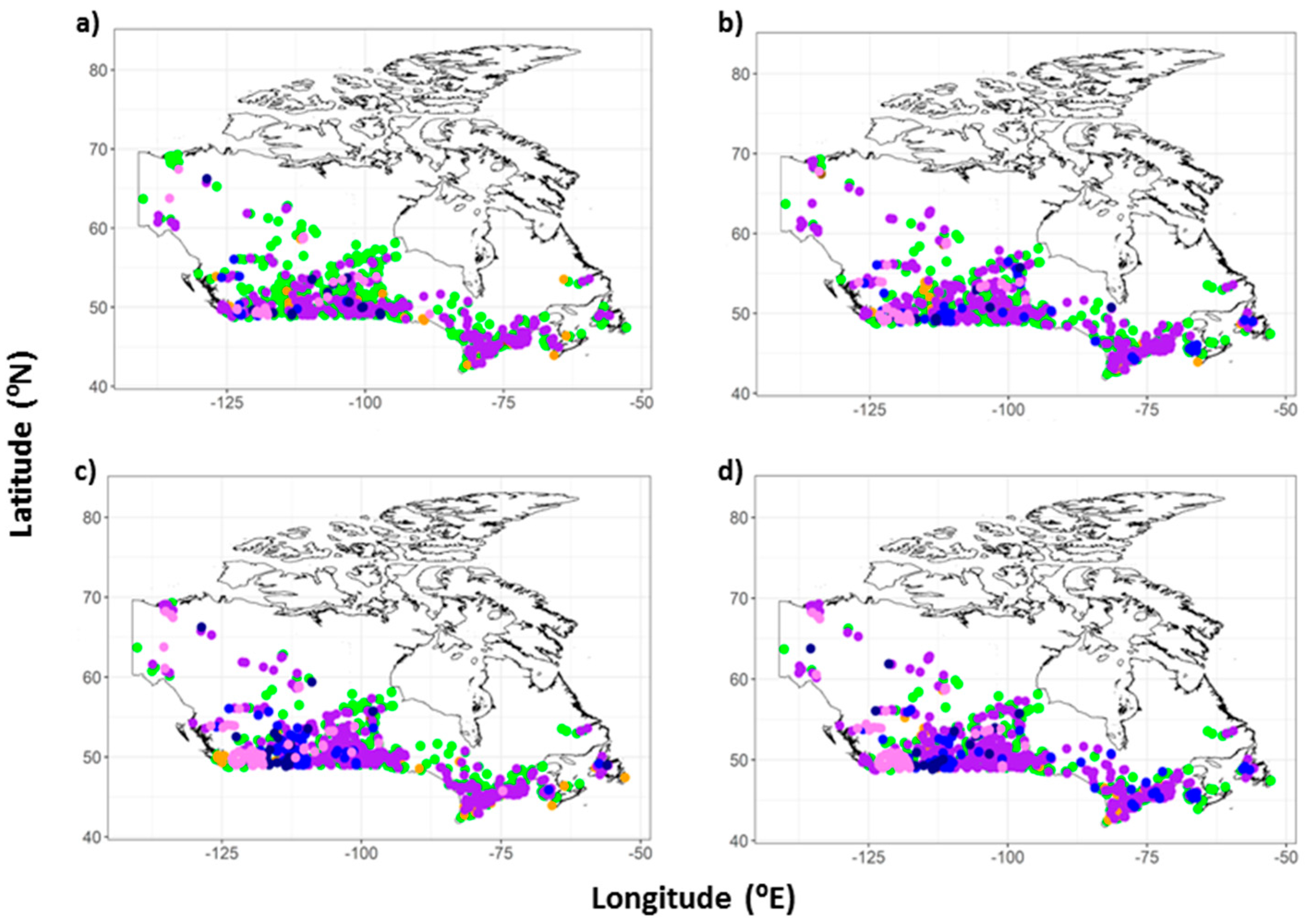 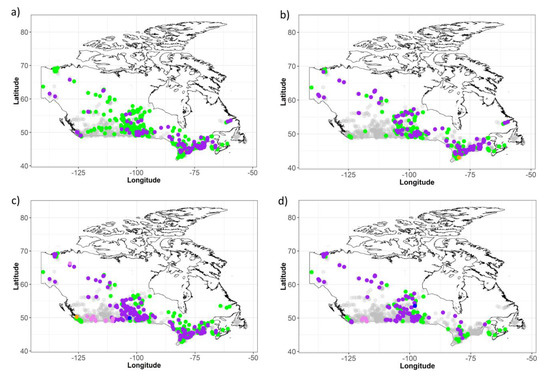 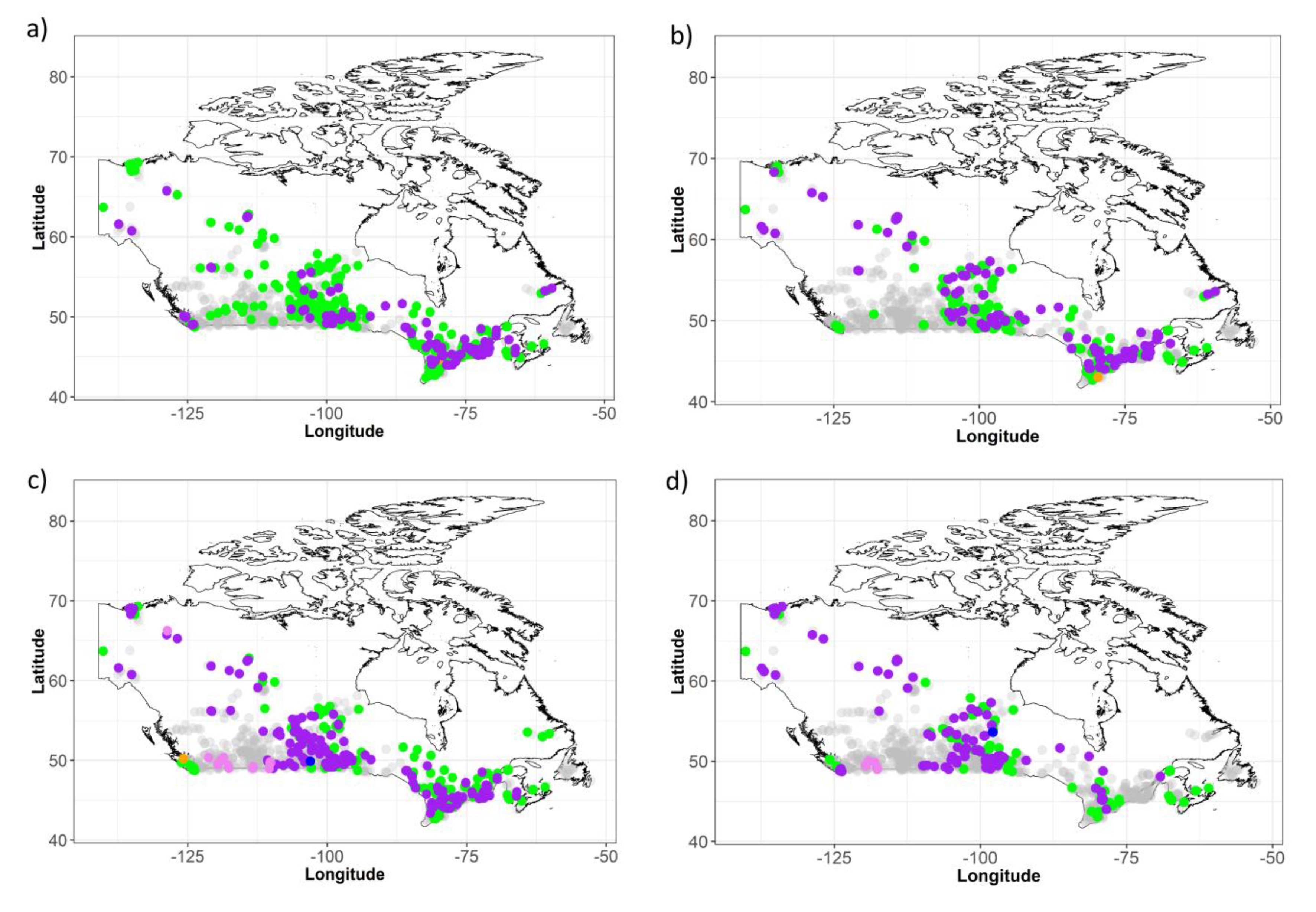