Therapeutic Editing of the TP53 Gene: Is CRISPR/Cas9 an Option?
Next Article in Special Issue

Turtles, a speciose group consisting of more than 300 species, demonstrate karyotypes with diploid chromosome numbers ranging from 2n = 26 to 2n = 68. However, cytogenetic analyses have been conducted only to 1/3rd of the turtle species, often limited to conventional staining methods. In order to expand our knowledge of the karyotype evolution in turtles, we examined the topology of the (TTAGGG)n telomeric repeats and the rDNA loci by fluorescence in situ hybridization (FISH) on the karyotypes of two emydids: the Sicilian pond turtle, Emys trinacris, and the yellow-bellied slider, Trachemys scripta scripta (family Emydidae). Furthermore, AT-rich and GC-rich chromosome regions were detected by DAPI and CMA3 stains, respectively. The cytogenetic analysis revealed that telomeric sequences are restricted to the terminal ends of all chromosomes and the rDNA loci are localized in one pair of microchromosomes in both species. The karyotype of the Sicilian endemic E. trinacris with diploid number 2n = 50, consisting of 13 pairs of macrochromosomes and 12 pairs of microchromosomes, is presented here for first time. Our comparative examination revealed similar cytogenetic features in Emys trinacris and the closely related E. orbicularis, as well as to other previously studied emydid species, demonstrating a low rate of karyotype evolution, as chromosomal rearrangements are rather infrequent in this group of turtles. View Full-Text
Keywords: Emys trinacris; FISH; karyotype; rDNA; telomeric sequences; Trachemys scripta scripta Emys trinacris; FISH; karyotype; rDNA; telomeric sequences; Trachemys scripta scripta
►▼ Show Figures 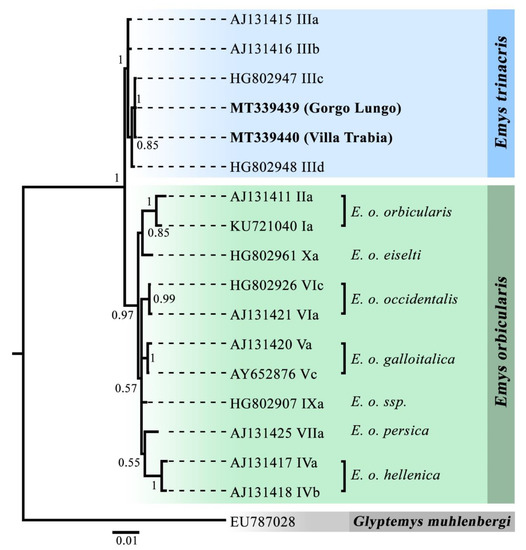