The control over the size distribution and stability of polymeric nanoparticles (NPs) is crucial in many of their applications, especially in the biomedical field. These characteristics are typically influenced by the production method and the nature of the starting material. To investigate these aspects, the controlled radical polymerization of functionalized methacrylates constituted by 2-hydroxyethyl methacrylate (HEMA) functionalized with a controlled number of ε-caprolactone (CL) units (HEMA-CLn), was carried out via reversible addition–fragmentation chain transfer polymerization (RAFT) in solution. The living reaction allows for good control over the molar mass of the final polymer with a low molar mass dispersity. The obtained polymer solutions were nanoprecipitated in order to produce NPs suitable for drug delivery applications with narrow particle size distribution and a wide size range (from 60 to 250 nm). The NP synthesis has been performed using a mixing device, in order to control the parameters involved in the nanoprecipitation process. As already seen for similar systems, the size of the produced NPs is a function of the polymer concentration during the nanoprecipitation process. Nevertheless, when the polymer concentration is kept constant, the NP size is influenced by the chemical structure of the polymer used, in terms of the presence of PEG (poly(ethylene glycol)), the degree of RAFT polymerization, and the length of the caprolactone side chain. These characteristics were also found to influence the stability and degradation properties of the produced NPs. View Full-Text
Keywords: RAFT polymerization; nanoparticles; poly(ε-caprolactone); nanoprecipitation; degradation RAFT polymerization; nanoparticles; poly(ε-caprolactone); nanoprecipitation; degradation
►▼ Show Figures 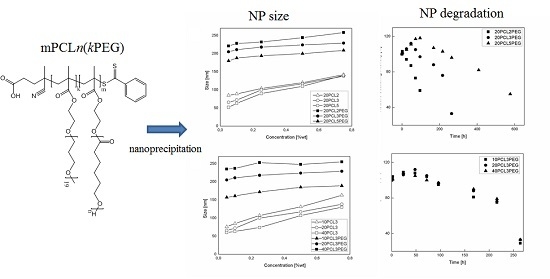 Gatti, S.; Agostini, A.; Ferrari, R.; Moscatelli, D. Synthesis and Nanoprecipitation of HEMA-CLn Based Polymers for the Production of Biodegradable Nanoparticles. Polymers 2017, 9, 389.


Gatti S, Agostini A, Ferrari R, Moscatelli D. Synthesis and Nanoprecipitation of HEMA-CLn Based Polymers for the Production of Biodegradable Nanoparticles. Polymers. 2017; 9(9):389.


Gatti, Simone; Agostini, Azzurra; Ferrari, Raffaele; Moscatelli, Davide. 2017. "Synthesis and Nanoprecipitation of HEMA-CLn Based Polymers for the Production of Biodegradable Nanoparticles." Polymers 9, no. 9: 389.