Although poly vinyl alcohol-poly acrylic acid (PVA-PAA) composites have been widely used for biomedical applications, their incorporation into double-layer assembled thin films has been limited because the interfacial binding materials negatively influence the water uptake capacity of PVA. To minimize the effect of interfacial binding, a simple method for the fabrication of a double-layered PVA-PAA hydrogel was introduced, and its biomedical properties were evaluated in this study. Our results revealed that the addition of PAA layers on the surface of PVA significantly increased the swelling properties. Compared to PVA, the equilibrium swelling ratio of the PVA-PAA hydrogel increased (p = 0.035) and its water vapour permeability significantly decreased (p = 0.04). Statistical analysis revealed that an increase in pH value from 7 to 10 as well as the addition of PAA at pH = 7 significantly increased the adhesion force (p < 0.04). The mechanical properties—including ultimate tensile strength, modulus, and elongation at break—remained approximately untouched compared to PVA. A significant increase in biocompatibility was found after day 7 (p = 0.016). A higher release rate for tetracycline was found at pH = 8 compared to neutral pH. View Full-Text
Keywords: wound healing; double-layer hydrogel; mechanical properties; biocompatibility; adhesion wound healing; double-layer hydrogel; mechanical properties; biocompatibility; adhesion
►▼ Show Figures 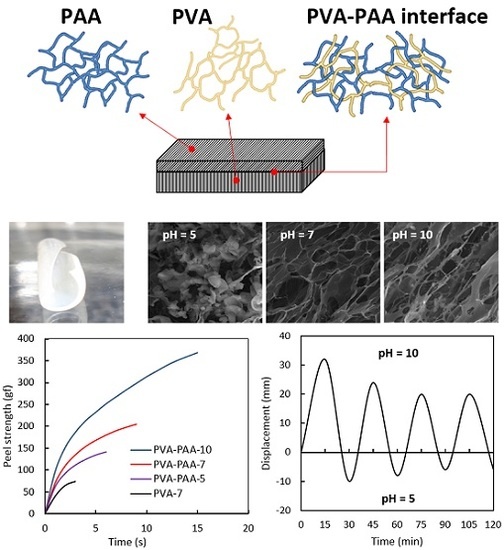