Biomaterials Based on Electrospun Chitosan. Relation between Processing Conditions and Mechanical Properties

In this paper, it is shown that pure chitosan nanofibers and films were prepared with success in 0.5 M acetic acid as solvent using poly (ethylene oxide) (PEO) at different yields, allowing electrospinning of the blends. After processing, a neutralization step of chitosan followed by water washing is performed, preserving the initial morphology of chitosan materials. The influence of the yield in PEO in the blend on the degree of swelling and hydrophilicity of films and nanofibers is demonstrated. Then, the mechanical behavior of blended nanofibers and films used as reference are determined for small stress applied in the linear domain by DMA and by uniaxial traction up to rupture. The dried and wet states are covered for the first time. It is shown that the mechanical properties are increased when electrospinning is performed in the presence of PEO up to a 70/30 chitosan/PEO weight ratio even after PEO extraction. This result can be explained by a better dispersion of the chitosan in the presence of PEO. View Full-Text
Keywords: PEO/chitosan blend; swelling; mechanical properties; wet and dried states PEO/chitosan blend; swelling; mechanical properties; wet and dried states
►▼ Show Figures 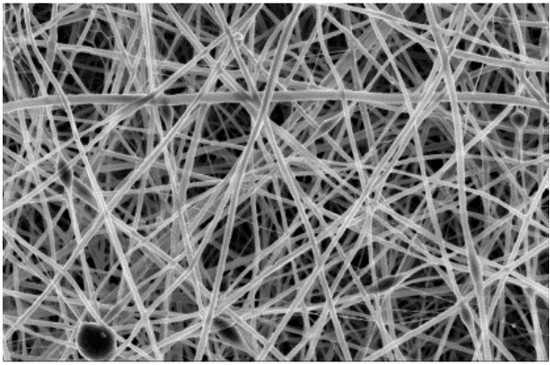