The Effects of Iodine Supplementation in Pregnancy on Iodine Status, Thyroglobulin Levels and Thyroid Function Parameters: Results from a Randomized Controlled Clinical Trial in a Mild-to-Moderate Iodine Deficiency Area
Previous Article in Journal

Is N-Carbamoyl Putrescine, the Decarboxylation Derivative of Citrulline, a Regulator of Muscle Protein Metabolism in Rats?

Obesity, recognized as a global epidemic, is becoming a growing global problem. More than 1.9 billion adults, over 340 million children and adolescents aged 5–19, as well as around 41 million children under the age of 5, were overweight or obese in 2016 [1]. Moreover, obesity predisposes to related diseases, such as dyslipidemia, hypertension, non-alcoholic fatty liver disease, and type 2 diabetes.
Literature data indicate that in the last few decades the consumption of fructose has increased. In the United States, in 1977–1978, average daily intake of fructose was 37 g (mainly due to the fresh fruit consumption), in 1988–1994 was 54.7 g and this tendency is still growing. Moreover, Tappy and Lê [2] reported that the world average sugar consumption has increased by around 16% over the 20 years: From 56 g per day per capita in 1986, to 65 g per day per capita in 2007. While, the contribution of fructose in total sugar consumption has increased from around 0% in 1970 to 41% in 2007 [2]. The reason is that fructose, which is sweeter and cheaper than sucrose, is widely used in food industry. High-fructose corn syrup is added not only to sweets, but also to beverages, dairy products, bakery products, and ready to eat meals, i.e., products consumed every day [3,4]. Regular intake of fructose is a factor contributing to the development of lipid disorders, oxidative stress, and chronic mild inflammation, which are directly associated with obesity and cardiovascular diseases [5]. Fructose exhibits pro-oxidative and pro-inflammatory properties by inducing the formation of free radicals, and decreasing non-enzymatic or enzymatic protection, as well as by inducing the production of pro-inflammatory cytokines and activating the nuclear factor kappa-light chain-enhancer of activated B cells (NF-κB), respectively [6,7]. The probable reason of lipid changes lies in the differences in metabolic pathway of fructose and glucose in the liver. Fructolysis bypass the rate-controlling step-phosphofructokinase. The unrestricted fructose metabolism provides the increased amount of substrates for, among others, lipogenesis, resulting in the accumulation of lipids in organs [8]. Additionally, high fructose intake stimulates lipogenesis by affecting the expression of the following transcription factors: Mlxipl and Srebf1. They regulate the expression of genes involved in lipid synthesis in the liver and adipose tissue: Acetyl-CoA carboxylase (Acaca), fatty acid synthase (Fasn), and stearoyl-CoA desaturase 1 (Scd1). In addition, perturbation of lipid metabolism may also result from the effect of fructose on the expression of peroxisome proliferator-activated receptor α (PPARα)-transcription factor responsible for regulating the expression of carnitine palmitoyltransferase 1a (Cpt1a) [8].
Numerous studies have shown that dietary interventions, including the consumption of functional foods containing bioactive compounds, have a positive impact on human health. It was reported that antioxidant, anti-inflammatory, and antihyperlipidemic properties of the polyphenols contained in fruit and vegetables can reduce the negative changes caused by high fructose diet [9,10]. Fruits of sweet cherry are seasonal fruits, which are consumed mainly in unprocessed form. The taste, color of the skin, and the content of numerous nutrients and phytochemicals make them attractive to consumers [11]. Literature data have indicated beneficial effect of these fruits on disorders related to non-communicable diseases, among other on lipid metabolism and inflammation [12,13,14]. Our previous studies revealed that not only fruit but also by-product-leaves, unused until now, are a rich source of bioactive compounds and exhibit a high antioxidant activity [15,16]. In available literature, there is lack of in vivo studies concerning potential benefits of sweet cherry leaves as well as studies comparing the fruit and leaves in animals fed with high fructose diet.
Therefore, we hypothesized that the bioactive compounds from fruit and leaves of sweet cherry reduce the adverse changes arising from the consumption of high fructose diet. The aim of this study was to investigate how the addition of these plants to high fructose diet affects lipid metabolism, including the expression of genes involved in fatty acid synthesis and oxidation in the liver and adipose tissue, as well as oxidative stress and inflammation in Wistar rats.

Growing, male, 6–7-week-old Wistar rats (n = 48), initially weighing 131.5 ± 9.6 g, were acquired from Animal Husbandry in Brwinów, Warsaw, Poland. Animals were maintained in plastic cages, at temperature of 22 ± 2 °C, under 12 h/12 h light/dark cycle with free access to food and water. Body weight gain was recorded weekly through the whole experimental period. All experimental procedures were performed in conformity with the Polish Ethical Standards and approved by the First Local Ethical Committee in Krakow Poland (res. no 166/2015; date of approval: 24 June 2015).

After one week for acclimation, the rats were randomly divided into six groups (n = 8). The experimental diets were prepared based on AIN-93G diet [17]. In high fructose (HFr) diet, the content of starch and sucrose was replaced by fructose, as the carbohydrate source (Table 1). The HFr diet was modified with the addition of fruit and leaves of sweet cherry (Prunus avium L.).
The fruit of cultivar Kordia and the leaves of cultivar Regina, which were harvested together at commercial maturity of fruit, were used in this study. They were collected from the Experimental Station of Pomology and Apiculture Department, University of Agriculture in Krakow, in Garlica Murowana, Poland, in 2016. Our previous study revealed that these cultivars had the highest content of total polyphenolic compounds, and they were characterized by the highest antioxidant activity compared to other cultivars. Additionally, in order to balance the composition of experimental diets, the basic chemical composition of fruit and leaves was measured [15]. The fruit and leaves were washed and dried. Additionally, the fruit was cut in half and pitted. Next, they were frozen at −80 °C and freeze-dried in lyophilizer (Christ Alpha 1–4 (Osterode am Harz, Germany)), ground and added to experimental diets in the form of powder.
The rats of the group I received AIN-93G diet-negative control (NC) diet, the group II–HFr diet (positive control diet), the group III–HFr diet with the addition of 5% of fruits (HFr + F5%), group IV–HFr diet with 10% of fruits (HFr + F10%), group V–HFr diet with 1% of leaves (HFr + L1%), as well as group VI–HFr diet with 3% of leaves (HFr + L3%) (Table 1). The level of the addition of sweet cherry fruit and leaves to experimental diets was chosen based on our previous study [18]. The diets of groups III–VI were balanced, taking into account the content of dietary fiber in fruit and leaves of sweet cherry because of its high level [15].

At the end of the 12-week experimental period, fasted rats were anaesthetized by inhalation of 4% izofluran (Baxter Polska Sp. z o.o., Warsaw, Poland). The blood, taken from the heart by cardiac puncture, was collected into the test tubes with heparin (to obtain whole blood), as well as into the centrifuge tubes (to obtain the serum). The serum was obtained by centrifugation at 1500 rpm for 15 min and stored at −80 °C for further analysis. The liver, heart, kidneys, and visceral (perirenal) adipose tissue were dissected and washed using a cold solution of 0.9% sodium chloride, dried, and weighed. They also were stored at −80 °C.

2.4. The Concentration of Crude Lipid and Fatty Acids Composition in Organs and Adipose Tissue

The content of the crude lipid in the liver, heart, and kidneys was measured by Soxhlet method using Soxtec Avanti’s 2050 Auto Extraction Unit (Tecator Foss, Hillerød, Sweden) as previously reported by Kopeć et al. [19]. The fatty acids composition was measured by gas chromatography–mass spectrometry using GC-17A-QP5050 GC-MS model (Shimadzu, Kioto, Japan) according to Kopeć and Piątkowska [20]. Results were shown as the percentage of all fatty acids.

The use of experimental diets did not cause the differences in glucose levels in whole blood of rats (Table 2). The animals fed with HFr and HFr + F10% diets were characterized by the significantly highest activities of ALT and AST in the serum. Whereas, HFr+F5%, HFr + L1%, and HFr+F3% diets resulted in the decrease in the level of these enzymes compared to HFr diet. It should be pointed out that the intake of these diets allowed for decreasing AST activity below the level recorded in NC group. Dietary treatment did not affect the concentration of TC in the serum of animals (Table 2). However, we observed the significant increase in the level of HDL cholesterol in rats fed with HFr + F5%, HFr + L1%, and HFr+F3% diets, as well as decrease in the concentration of LDL+VLDL cholesterol in animals receiving the HFr + F10% diet, in comparison to HFr diet. The rodents fed with HFr + F10% and HFr + L1% diets had lower levels of TG in the serum compared to rats receiving HFr diet.

The addition of fruit and leaves to HFr diet did not change the TAS level in comparison to HFr diet, whereas it affected the activities of antioxidant enzymes (Table 3). The intake of HFr + F5%, HFr + F10%, HFr + L1%, and HFr + L3% diets resulted in significant increase in the level of GPx and decrease in the level of CAT compared to HFr diet. It is worth mention that the decreased CAT activity reached the similar or even lower level than in animals receiving NC diet. Additionally, the animals fed with HFr + L3% had significantly lower activity of SOD, however, the rats receiving HFr + F10% had the higher level of GR, in comparison to rodents receiving HFr diet. The effect of dietary treatment on HO-1 concentration in the serum of animals was not found. The level of TBARS was significantly lower in the serum of rats receiving HFr + F5% diet, compared to animals fed with HFr diet.
The rats fed with HFr + F5%, HFr + F10%, HFr + L1%, and HFr + L3% diets were characterized by the lower concentration of CRP in the serum in comparison with animals receiving HFr diet (Table 3). It should be noted that above-mentioned CRP concentrations were on similar level compared to those found in NC group. The highest level of IL-10 was observed in the serum of rats fed with HFr + F10% and HFr + L3% diets compared to NC and HFr diets.

In conclusion, sweet cherry fruit and leaves reduced the adverse changes arising from the consumption of high fructose diet. Intake of these parts of sweet cherry resulted in the improvement of liver function, as well as beneficially affected lipid metabolism, among others, by regulating the expression of genes associated with fatty acid synthesis and β-oxidation. Additionally, they exhibited the antioxidant and anti-inflammatory properties. Our results indicate that not only commonly consumed fruits, but also leaves can be potentially used as functional foods. These findings may be helpful in prevention and treatment of obesity-related metabolic diseases, especially cardiovascular diseases.

The authors are grateful to Antoni Borgiasz and Ewelina Kukiełka for their help during the animal studies. This study was financed by the National Science Centre, Poland (Grant no. 2015/17/N/NZ9/01136).

All experimental procedures were carried out according to Polish Ethical Standards and approved by the First Local Ethical Committee in Krakow, Poland (res. no 166/2015; date of approval: 24 June 2015). 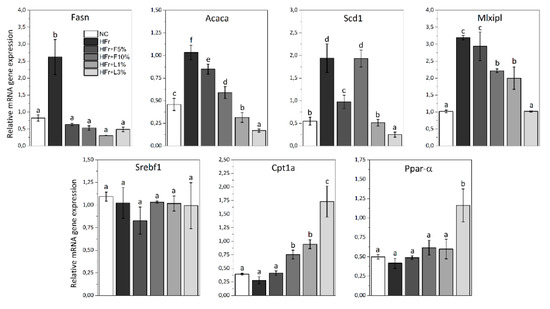 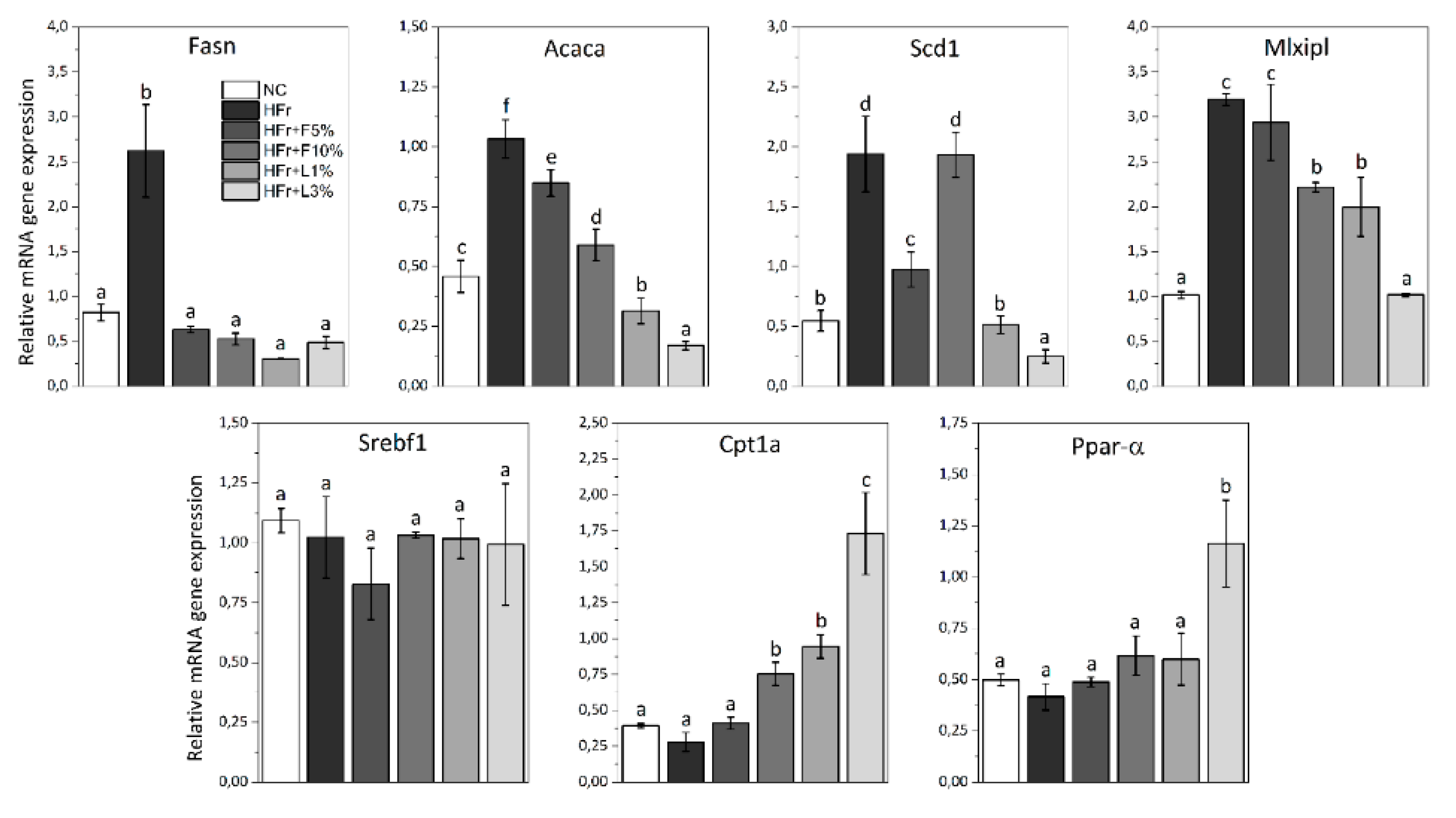