Heatstroke Risk Predictions for Current and Near-Future Summers in Sendai, Japan, Based on Mesoscale WRF Simulations

Effect of Land-Use Change on the Urban Heat Island in the Fukuoka–Kitakyushu Metropolitan Area, Japan

In coastal cities, the effect of the sea breeze in mitigating the urban heat island (UHI) phenomenon has attracted attention. This study targeted the Fukuoka–Kitakyushu metropolitan area, the fourth largest metropolitan area in Japan which is also coastal. Doppler Light Detection And Ranging (LiDAR) observations were conducted in the summer of 2015 to clarify the transition of the wind field over the targeted area. To investigate the effects on the UHI of land-use change related to urbanization, the National Land Numerical Information (NLNI) land-use datasets for Japan in 1976 (NLNI-76) and 2009 (NLNI-09) were used in the Weather Research and Forecasting (WRF) model. The results of the simulation showed that most of the northern part of the Kyushu region became warmer, with an average increase of +0.236 °C for the whole simulation period. Comparing the two simulations and the Doppler LiDAR observations, the simulation results with the NLNI-09 dataset (for the year closest to the study period in 2015) showed closer conformity with the observations. The results of the simulation using NLNI-76 showed faster sea breeze penetration and higher wind velocity than the observations. These results suggest that the land-use change related to urbanization weakened the sea breeze penetration in this area. View Full-Text
Keywords: urban heat island; meso-scale meteorological model; Doppler LiDAR; sea breeze; land-use change urban heat island; meso-scale meteorological model; Doppler LiDAR; sea breeze; land-use change
►▼ Show Figures 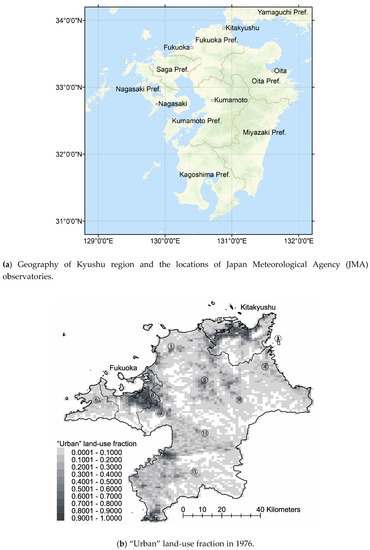 
Kawamoto, Yoichi. 2017. "Effect of Land-Use Change on the Urban Heat Island in the Fukuoka–Kitakyushu Metropolitan Area, Japan." Sustainability 9, no. 9: 1521.