Intergroup Comparison of Personalities in the Preferred Pricing of Public Transport in Rush Hours: Data Revisited
Previous Article in Journal

A Critical Review of Academic Approaches, Methods and Tools to Assess Circular Economy at the Micro Level
Previous Article in Special Issue

Public transport is an essential service in society, particularly for cities and urban areas where population density is highest, space is a premium, and mass commutes and vehicle congestion are daily affairs. With rapid development, prototyping and on-road trials of automated vehicles (AV) underway, the progress in this area suggests that deploying AVs for public transport could be realised within the next few years. Examples of AV road trials include the GATEway Project in Greenwich, UK and the Automated Road Transport System in La Rochelle in France. When this happens, it is likely that the transport systems that we are familiar with today will undergo fundamental changes, modifying how we will travel, access and use public transport in the future.
Several studies and reports have explored the potential applications of AVs in many areas of urban transport (e.g., [1,2,3,4,5]). In addition, there are studies focusing on understanding the perceptions and acceptance of AVs (e.g., [6,7,8,9,10,11,12]). These studies suggest that there is general acceptance regarding AVs but there are challenges such as speed, efficiency and safety raised by potential users that have to be addressed [6,7,8,9,10,11,12]. While useful, these studies largely focused on specific applications of AVs as private vehicles or short distance shuttles. These findings may not necessarily capture the acceptance or perceptions of the overall concept of introducing AVs into public transportation, particularly in the context of a dense public transport-centric city. Hence, this paper focuses on the potential expanded application of AVs in public transportation.

AVs in public transport are not entirely new as many cities and countries have deployed them in varying forms (e.g., driverless trains in subway and metro systems). However, deploying AVs as road public transport will be different as they share public roads and spaces with other vehicles and will come in close interactions with the public, as opposed to being in confined, predetermined spaces.
Hence, autonomous road public transport has been envisioned to have the ability to transform public transport systems by bringing in new forms of shared mobility that is also safer and more efficient [13]. This potentially increases the appeal and use of public transport which will ease traffic congestions in cities, and coupled with improved fuel economy and reduction in emissions, will reduce the environmental impact of transportation [2]. Public transport might also be made more accessible, by providing on-demand public transport to low demand or underserved areas reliably and safely as the automation also addresses manpower constraints and reduces human errors [4]. The nature of AVs also means that manpower is freed up for jobs and services that require greater manpower. Lastly, it is also envisioned that autonomous road public transport will contribute towards keeping public transport affordable.
While AVs may hold many promises of improvements for public transport, there remain challenges that have yet to be adequately addressed, including issues surrounding safety, system security, vehicle control, ethics, legal liability and even integration with other transport modes [11,12,14]. These issues have a direct influence on the public’s perception of AVs and ultimately, their acceptance and adoption of AVs that are deployed for public transport [9,15].

In Singapore, different forms and applications of AVs are currently being developed and prototyped for service as autonomous road public transport. These undertakings are part of Singapore’s Smart Nation strategy for transportation to address the growing demand for transportation underscored by a growing and ageing population housed within a land-scare Singapore. The Committee on Autonomous Road Transport for Singapore charts the strategic direction for AV-enabled land mobility concepts in Singapore, and the Singapore Autonomous Vehicle Initiative explores the technological possibilities that AVs can create for Singapore [16].
Development of AVs in Singapore started in 2010, and public trials have been conducted since 2014 [17]. The world’s first commercial autonomous mobility-on-demand service was also tested in 2016 by nuTonomy [18]. In 2018, driverless shuttles serving a predefined were also tested on public roads [19]. Currently, the Land Transport Authority (LTA) is developing an autonomous bus that can seat 40 passengers with ST Kinetics [20] and has announced that three towns (Punggol, Tengah and the Jurong Innovation District) will have autonomous buses and shuttles plying their roads from 2022, with autonomous buses being deployed during off-peak periods and autonomous shuttles providing first-last-mile connections in these districts [21].

Informed by a prior literature review on the emerging transport technologies and developments pertinent for Singapore, a 49-item self-report online survey was created to explore the concerns, benefits and implementation preferences around autonomous road public transport implementation in Singapore and its future adoption intention (acceptance). To start, participants were asked two questions to self-report i) their level of knowledge of AVs in general (measured on a 5-point Likert scale ranging from 1 [I have never heard of AVs prior to this study] to 5 [I have a good understanding about AVs]), and ii) whether they have had prior experience riding on an AV (with the response options of ‘yes’, ‘no’ and ‘unsure’). Following which, we shared information about the current state of implementation of AVs in public transport in Singapore with respondents using a short one-page writeup with pictures of ongoing trials to ensure respondents had the same level of basic understanding as it was still a concept at the time of the study (see Appendix A).
Participants were recruited via an open call for research participation on the university’s website and through snowball sampling. The study was conducted between July and August 2018 and participants did not receive any incentives for participation. A quality check of the responses was then conducted (e.g., for straightlining of responses and speeding through the survey).

210 participants completed the survey, of which 46.6% were female and their ages ranged from 18 to 79 years. Our sample comprised of relatively younger and higher educated participants, in part due an overrepresentation of university students (23.6%). Nevertheless, 73.8% of participants were daily public transport users. This is slightly higher than the 67% public transport mode share during peak hours [23] but is close to the ambition of achieving 75% public transport mode share set by the LTA. Thus, we conducted further analyses without weighting the responses. Detailed demographics are provided in Table 1.

We developed the questionnaire exploring the concerns, benefits and implementation preferences around autonomous road public transport implementation based on past studies (e.g., [7,22,24]) with contextualisation to Singapore when necessary, informed by our prior review of future transportation technologies in Singapore [25]. We explored 8 items for ‘concerns’, 7 items for ‘benefits’ and 11 items for ‘implementation preferences’. Participants responded on 5-point Likert scales, ranging from ‘strongly agree’ to ‘strongly disagree’. The individual items in each aspect are presented in Table 2, Table 3 and Table 4. Exploratory factor analyses found that the items in each aspect clearly loaded on a single factor.
To measure intention to adopt autonomous road public transport when available, measuring acceptance, we used a 3-item measure with a 5-point Likert scale informed by the UTAUT2 model [26] that demonstrated excellent internal reliability in this study, Cronbach’s alpha = 0.94. The final items and measures developed for the study are shown in Table 2, Table 3 and Table 4.

Prior to the survey, participants self-reported their level of knowledge of AVs in general. Out of all participants, 13% responded that they have not heard of AVs prior to this study and 11.5% responded that they had a good understanding of AVs. The remaining 75.5% responded between these two options. The mean response on a 5-point Likert scale was 2.98 (sd = 1.19).
To the question on prior experiences AVs, 23% of participants reported having ridden on one, with 71% reporting not having so and 6% reporting being unsure if they have done so.

Overall, the participants were positive in their acceptance of autonomous road transport with an average score of 3.87 (SD = 0.93) on a scale from 1 (very unlikely) to 5 (very likely). There were no significant differences observed in the acceptance scores across sex, age, marital status, labour status and physical disability status, p = 0.20 to 0.97.

Table 2 summarises the eight concerns about implementing autonomous road public transport we explored. The average scores in all eight concerns indicate that these are present concerns, but technical-related issues (i.e., accidents triggered by technical error and confusion during unexpected/unprecedented situations) and legal liability saw the highest average levels of concern. Meanwhile, the performance of the vehicle and the transport cost were less of a concern for our participants. In addition, one-sample t tests revealed that the mean scores for all concerns were significantly different from the mean of the scale, all p < 0.001. No significant differences were observed in the level of all eight concerns across sex, age, marital status, educational level, labour status and physical disability status, p = 0.19 to 0.82.

Table 3 summarises the seven benefits of the implementation of autonomous road public transport that we explored. Generally, the average scores for all seven benefits indicate that the participants perceive that there will be benefits from the introduction of autonomous road public transport. Nevertheless, the magnitude of the mean scores observed here are relatively close to 3, the ‘neutral’ option in this questionnaire. One-sample t tests revealed that the mean scores for all benefits were significantly different from the mean of the scale, all p < 0.05. No significant differences were observed in the responses across sex, age, marital status, education level, labour status and physical disability status, p = 0.07 to 0.86, except for the following: 1) male participants reported a greater perception that autonomous road public transport are safer than manual driving (mean (SD) = 3.40 (1.20)) compared to their female counterparts, mean (SD) = 2.96 (0.88), p = 0.01; and 2) participants with educational qualifications of masters and above reported lower perception of improvement of travel comfort by the potential introduction AVs in public transport (mean (SD) = 3.05 (0.97)) compared to the rest of the participants, with means ranging from 3.38 to 3.73, p = 0.014.

Table 4 summarises the 11 implementation preferences that we explored. All implementation preferences explored here were supported by the participants, with all but two (waiting until others have tried before using it, and having human operators on board) reporting means scores above 4 (the ‘agree’ option on a 5-point Likert scale), suggesting strong preferences for them to be introduced when implementing autonomous road public transport. Nevertheless, one-sample t tests revealed that the mean preference scores for all implementation options were significantly different from the mean of the scale, all p < 0.05 No significant differences were observed across sex, age, marital status, labour status and physical disability status, p = 0.07 to 0.86, only across education levels. Participants with educational qualifications of masters reported lower preference for waiting for others to use autonomous road public transport before trying it themselves (mean (SD) = 2.59 (1.21)), compared to the rest of the participants, means ranging from 3.29 to 3.74, p = 0.001.

3.5. Relationships Between Perception and Acceptance

Both authors contributed to all parts of the research. All authors have read and agree to the published version of the manuscript.

The authors would also like to thank Andrea Chong, Yang Lujia and Aashay Chouhan for their assistance in data collection. S.C. is partially funded by the Chen Tianqiao Program for Urban Innovation at the Lee Kuan Yew Centre for Innovative Cities, Singapore University of Technology and Design. The views expressed are those of the authors and not necessarily those of the above funders. 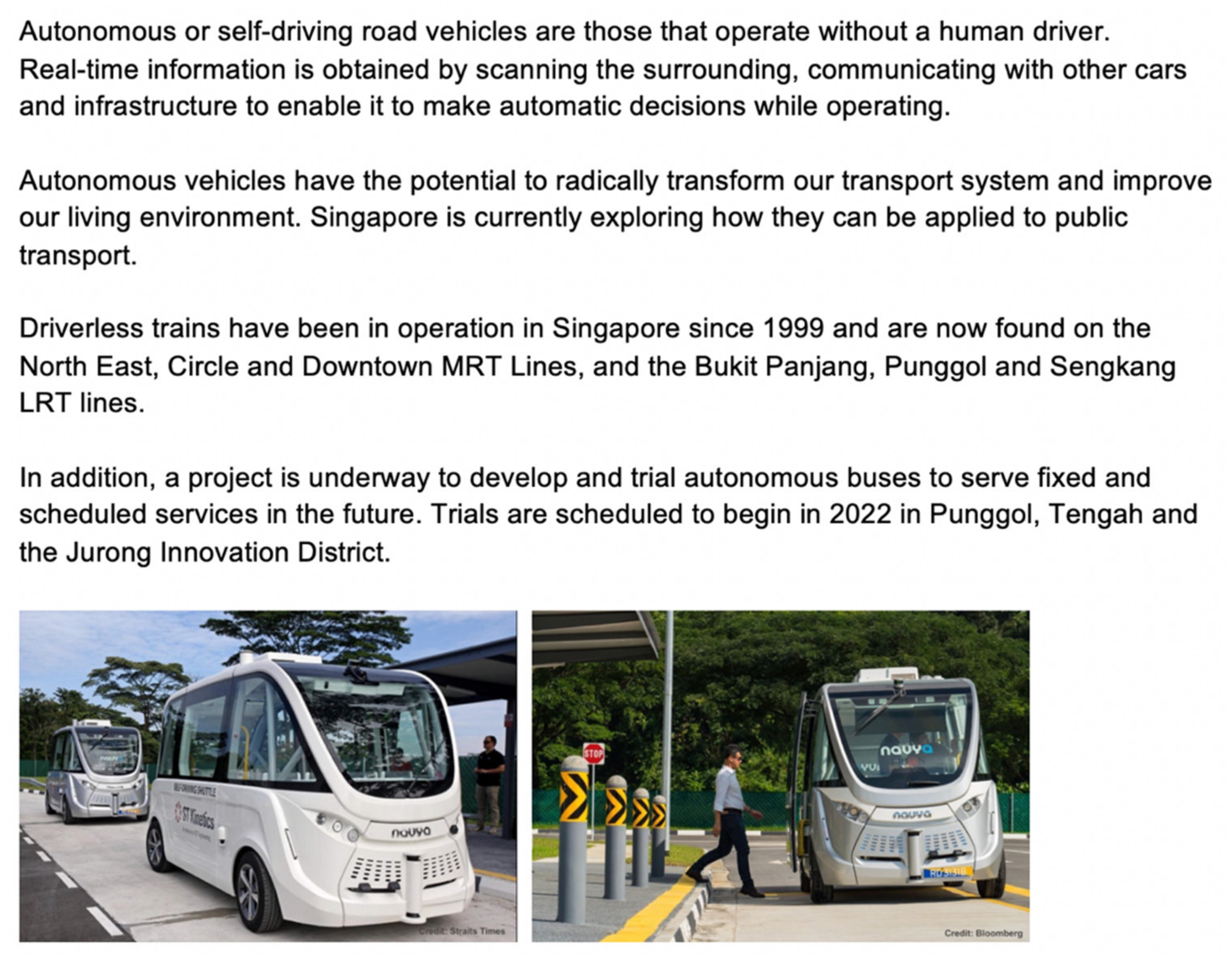