The tires used constitute an environmental problem that remains unsolved. It is observed that the automotive fleet and therefore the generation of tires increases year after year, so the recovery and reuse processes are insufficient. For several years, the reuse of tires as materials in the construction has been considered, and several techniques have been developed for the construction of retaining walls and road reinforcement. However, to date, their use remains sporadic. This article presents the theoretical and experimental evaluation of a new geotechnical reinforcement system from used tires. This system, suitable for the construction of containment structures and the reinforcement of roads, is characterized by the conformation of cells that do not require other elements apart from the tires and the filling material. A mathematical model was developed to describe the behavior of the system and pullout tests were carried out for validation. The tests were performed with different tire and compacted granular material with different energies. The results allow validating the theoretical model by showing an increase in pullout resistance with the density and number of tires in the arrangement. It is observed that the coincidence between the model and the tests improves as the stiffness of the soil increases, being the degree of compaction fundamental for the operation. View Full-Text
Keywords: pullout resistance; used tires; soil reinforcement; experimental pullout resistance; used tires; soil reinforcement; experimental
►▼ Show Figures 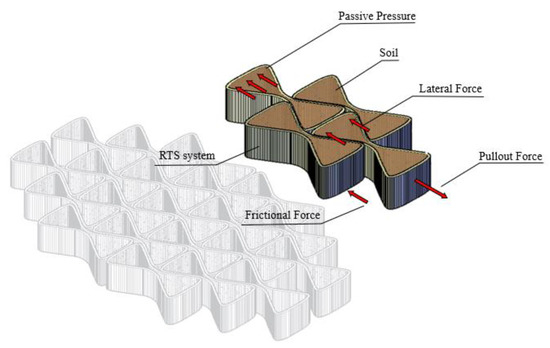