A Path Transition Towards a Bioeconomy—The Crucial Role of Sustainability

This paper explores how urbanization processes, since the 1950s, affected forested areas in the Mazowiecki Landscape Park and determines if these processes resulted in a significant reduction of forest. Spatial analyses, which were used to generate very detailed data on the area of forests, agricultural land, and development areas, were carried out, and the spatial directions of the changes were determined. The results indicate that, in comparison to the 1950s, in the 1990s, the forest area did not decrease, but, in fact, increased, despite a significant increase in the development area, both in the present area of the park and in its buffer zone. This was due to the fact that new buildings were constructed in mainly agricultural areas. At the same time, intensive afforestation of weak soils, mainly inland dunes, was carried out in this area. Comparing the current period to the 1990s, further dynamic growth of the development area can be observed, especially in the park’s protective zone, with a simultaneous decrease in the forest area and agricultural land.
Keywords: urbanization; forest; spatial planning urbanization; forest; spatial planning

Urbanization is one of the most evident global changes. During the last century, rapid urban growth exerted heavy pressure on land and resources in urban areas, as well as rural areas [1,2]. Large parts of the world are highly urbanized and the majority of the world’s population now lives in cities and towns [3]. Most urban residents actually live in cities that have 1–5 million people [4]. In developed nations, 80–90% of people live in cities, whereas, in the poorest nations, only 20% live in cities [3,5]. Urbanization resulted in many economic benefits for many countries, with tremendous improvements in the provision of social services to communities [6]. However, if urbanization is not adequately managed, it can lead to unfavorable environmental consequences [7]. Atmis et al. [8] highlighted the fact that urban development also leads to the exploitation of nature, resulting in an unhealthy ecology, which affects urban forest users. There are many works [9,10,11] devoted to the natural effects of urbanization. Suburbanization includes a decline in biodiversity, the transformation and disappearance of valuable ecosystems, and the weakening and disappearance of the natural dynamics of the environment [9,10]. Many urban areas are now confronted with overpopulation of species, for instance, deer and geese, resulting in problems such as property damage by wildlife, traffic hazards, and health concerns [10]. Urbanization, directly and indirectly, caused major shifts in species composition [11]. Coles and Millman [12] pointed out that the unprecedented urbanization, the disproportional development between gray (settlement and built infrastructure) and green areas, and chaotic traffic systems pose great challenges to urban planners when aspiring for the provision of healthy living surroundings. Development goes hand in hand with urban deforestation, indicating increasing pressure on urban forests [8]. Suburbanization leads to an increase in investment pressure on environmentally valuable areas [13]. Strzałkowska and Hurba [14] emphasized that excessive human activity leads to the loss of value in protected areas. The scope of suburbanization influences the natural and landscape values of protected areas adjacent to the city [14]. The process of suburbanization often destroys attractive open spaces, natural ecosystems, and nonrenewable organic resources, and leads to landscape degradation [15]. In Poland, the process of urban sprawl is most visible in the largest metropolitan areas, such as Warsaw [16]. In Poland, like in other countries [8], an intensive urbanization process started in the 1950s, shortly after World War II, and was caused by internal migration from rural areas to urban areas. The next wave of intensive urbanization took place in the 1990s, and it was a consequence of the fall of communism, the implementation of free-market policy, and the reprivatization of state property. It was also a special period for the development of the real-estate market and changes in land use, as well as many social changes, which had an impact on certain spatial changes, including, above all, the processes of population movement outside the urban areas [17]. Kurek et al. [17] considered urban depopulation and settlement in suburban zones: “the most important changes in population distribution since the 1990s”. Denis and Majewska [18] found that, in Poland, after the political transformation in the 1990s, the growing demand for building plots resulted in exceptionally intensive urbanization of rural areas within a radius of up to 50 km around Warsaw. Today, under the slogan “to live closer to nature”, scattered single-family housing is created in the middle of fields and near forests, degrading local ecosystems [18]. For sustainable spatial management, it is important to determine the dynamics and scale of these transformations. As Samie et al. [19] noted, studying land-use change is crucial to environmental management because it influences carbon cycling, greenhouse gas emission, radiation and water budgets, and livelihoods. Land-cover and land-use change information is a very important and useful source for planners in land-use studies. Karakus et al. [20] asserted that the determination of land-use potential, by considering the capability of the land and other characteristics, provides an important data source for regional planning studies. By monitoring urban development and the conversion of fertile land and forests for different needs, city managers and planners can anticipate the potential vector(s) of city growth and, thus, counteract urban sprawl [21]. Therefore, the aim of this study was to determine the impact of urbanization on the dynamics and scale of spatial transformations in the areas adjacent to Warsaw. The Mazowiecki Landscape Park (MPK) was chosen as the study area, because it is an important part of the green belt of Warsaw.

Mazowiecki Landscape Park was established in 1986. Landscape parks established under the Nature Conservation Act [22] are one of the forms of nature protection in Poland. The idea for establishing Mazowiecki Landscape Park (MPK) was to save the existing forest complexes as an important element of the environmental and biological structure (also as the “green lungs”) of the Warsaw agglomeration. The park, together with a buffer zone, covers an area of 23,710 ha in total, of which 15,710 ha is located within the park, and the remaining 8000 ha is the buffer zone. The park covers territorial units, which include districts of Warsaw, such as Wawer and Wesoła; six rural communes (in the territory of which there is no city), Celestynów, Kołbiel, Osieck, Pilawa, Sobienie-Jeziory, and Wiązowna; two municipalities (urban communes that cover only the city concerned within its administrative boundaries), Józefów and Otwock; and one urban–rural commune (including both towns and villages), Karczew (see Figure 1). Forest land covers an area of 11,858 ha within the park borders, which constitutes 75.5% of the park grounds. In the buffer zone, forests cover an area of 147,112 ha (18.4% of the buffer zone grounds). The share of private forests in the MPK area is 50%. The park is divided into two parts, the northern part, the so-called Wawerski Forest complex, and the southern part, including the Celestynów-Otwock Forests and the vast areas of the “Bagno Całowanie” low moor. There are nine nature reserves located in the Mazowiecki Landscape Park, with three of them in the northern part.
This research posed the following question: “how have urbanization processes since the 1950s influenced changes in the land-use structure within the park?” In order to determine the dynamics and scale of these transformations, spatial analyses based on the following materials were performed:
The starting point for spatial analyses was the transformation of analog materials (photos and diapositives) into an electronic version and giving them a real geographic mapping. Quantum geographic information system (GIS) software (QGIS 2.14 Essen) and a scanner with an additional light source were used for this purpose. In QGIS, the spatial coverage of polygons—forests, agricultural land, and building objects—was determined on consecutive vector layers. The layers of polygons, created as a result of preparatory works, enabled the generation of figures concerning forest areas, agricultural land, and development areas in the three analyzed time periods, 1955, 1992, and 2017. The comparison of these data was the key to assess the trends in land transformation in the park and its protection zone and also within the borders of individual administrative units (Warsaw, urban communes, rural communes, and urban–rural communes). The results are presented in tabular form and on maps.

Forests play a crucial role in sustaining life on earth. Despite the increasing awareness of the importance of these ecosystems, global deforestation rates remained alarmingly high over the past decades (Food and Agriculture Organization of the United Nations, FAO) [48]. The main drivers of global deforestation are linked to wood extraction, infrastructure extension, population growth, and the expansion of agriculture [49]. Ferretti-Gallon and Busch [50] suggested that deforestation is generally lower in high, steep, and wet areas, while it is higher in areas where forests are closer to roads and urban areas. The development of buildings, especially in urban agglomerations, as shown in this study, leads not only to deforestation of land, but also to the disappearance of agricultural land. The conducted research shows that the urbanization process which lasted from the 1950s almost until the 1990s did not result in any shrinkage of forest resources in the MPK and its protection zone. In this period, the loss of agricultural land within the MPK boundaries was connected with afforestation. In the protection zone, 70% of the area previously used for agricultural purposes was afforested, while the remaining part was occupied by buildings and accompanying infrastructure. The process of transforming forests into development areas was evident since the 1990s, especially in the area of Warsaw and urban communes located in the northern part of the park. This applies to forests both in the park and in its buffer zone. At the same time, we are observing a further reduction in the area used for agricultural purposes. This situation leads to the separation of forests in the northern part of the MPK and the disappearance of ecological corridors connecting the northern and southern parts of the park. This situation suggests that the creation of protected areas in the vicinity of cities is not a sufficient way to counteract urbanization in areas of high natural values. Changes in land use caused by urbanization will pose significant challenges for wildlife agencies and policies in the future, especially with respect to the nature of decision-making processes. Urban sprawl, converting valuable agricultural areas and greenfield sites into low-density housing or for commercial building areas, is the most urgent problem of urban planning [51]. Studies on land change in urban regions, and the dynamics and scale of these transformations provide planners with important information to sustainably manage these areas. This is also important because urban land change includes many new urban–rural spaces functionally tied to the city and has many impacts on rural areas and, hence, deserves more attention in land-change science [43].
While the transformation of agricultural and forest land into residential areas is an urgent problem for urban planning, it should be noted that Polish law in this area—the Act of 3 February 1995 on the protection of agricultural and forestry lands [52]—limits the transformation of such land for non-forest purposes. The change of forest land use requires the permission of specific authorities (environmental minister or marshal of the voivodeship) during the preparation of the local spatial development plan. Specific legal provisions, as well as policies favoring afforestation of land, reduce the degradation of forest land that is particularly protected. 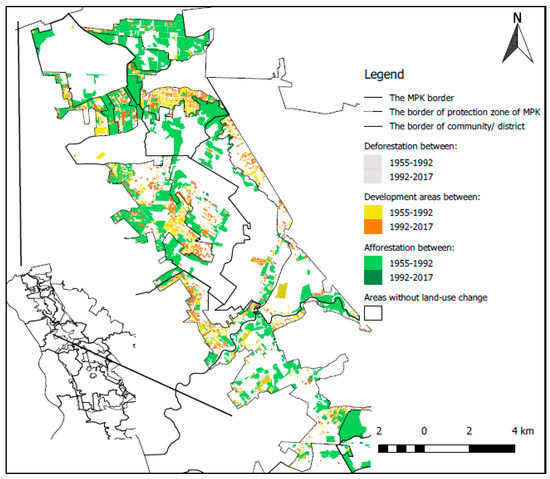 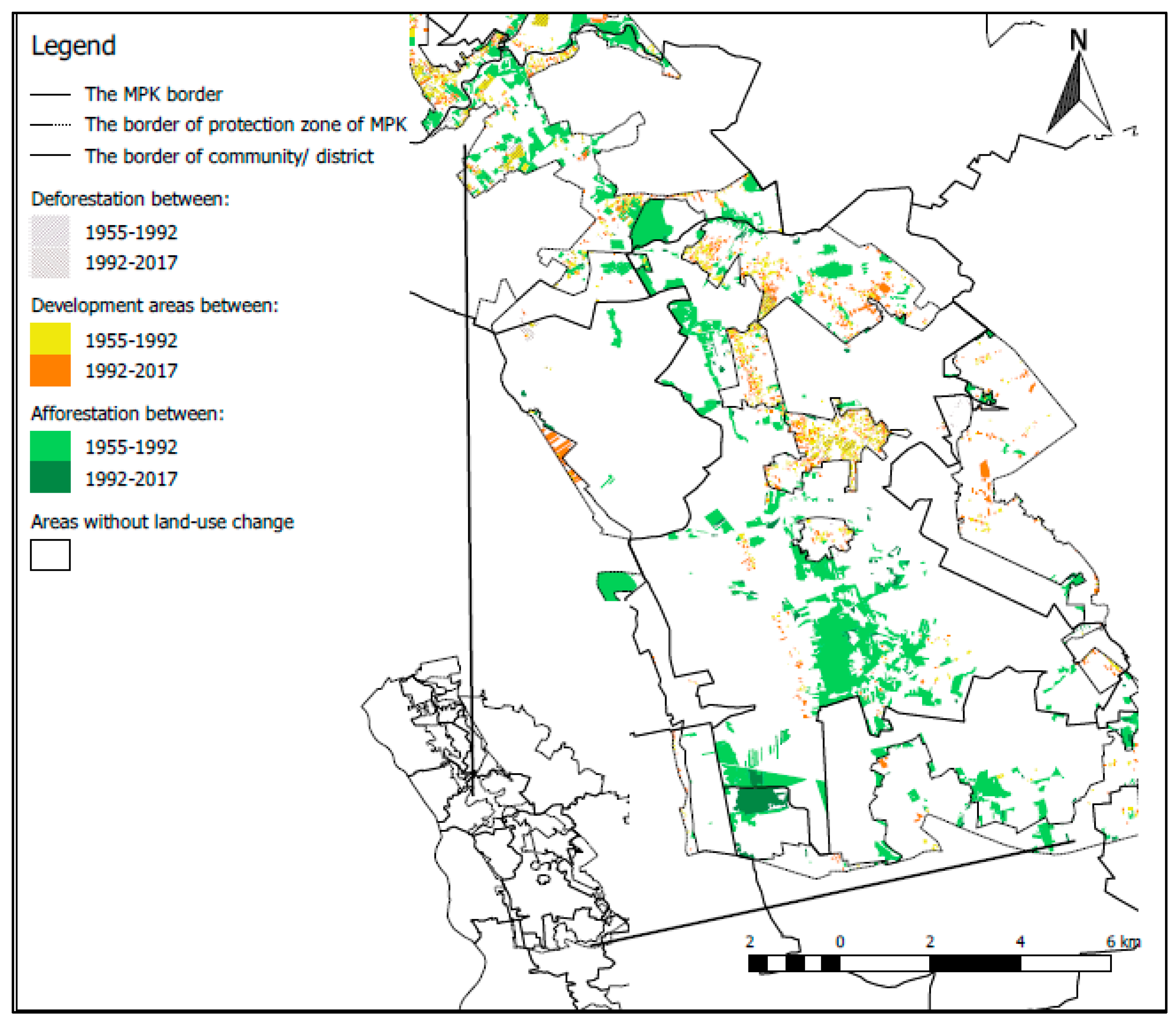