The Impact of Carbon Emissions on Corporate Financial Performance: Evidence from the South African Firms
Next Article in Special Issue

Sustainability Descriptive Labels on Farmed Salmon: Do Young Educated Consumers Like It More?

Despite the efforts to make fish sustainable, it is largely unknown if young educated consumers’ taste of fish and their willingness to pay more for fish is influenced by positively framed messages regarding sustainable farming practices. This research investigated if a positively framed description of sustainable farming opposed to positively framed descriptions of flavour, health benefits, or socially responsible farming, influences young consumers’ liking, and willingness to pay for farmed salmon. Young consumers of fish (n = 119) randomly tasted Fresh and hot Smoked salmon and rated their liking and willingness to pay more on structured line scales. The salmon were labelled with either a description of sustainable farming practices, flavour benefits, nutrition/health benefits, socially responsible farming practices, or no descriptions. Descriptive labelling about Sustainability (p = 0.04), Flavour (p = 0.01), and Health/nutrition (p = 0.01) significantly increased consumers’ liking of Fresh salmon compared to Fresh salmon without labelling. No such a difference was found between the social responsibility label and the sample without labels (p = 0.2). Participants were willing to pay more for 250 g of Fresh and Smoked Salmon with descriptive labels (Fresh: $9.3 ± $0.003; Smoked: $10.1 ± $0.003), than for the same Salmon without such labels (Fresh: $9.0 ± $0.06; Smoked: $9.8 ± $0.08) (p < 0.001). The sustainability descriptive label had no added benefit above other descriptive labels. The liking and buying intent were, for all labels and fish types, strongly correlated (r = 0.80, p < 0.001). In conclusion, sustainability labelling is promising, but does not differentiate from other positively framed messages.
Keywords: sustainability; sensory; seafood; consumers sustainability; sensory; seafood; consumers

The majority of consumers were female (91%) and had at least completed year 12 of secondary school (Table 2). As shown in Table 3, fish was most frequently consumed (more than once a month) as steamed/grilled/ baked and/or canned fish. Raw and fried were the least popular preparation methods. Virtually all consumers reported that flavour and/or health were important to very important when it came to food choices. Sustainability and social responsibility were the least important aspects of food (p < 0.0001). This is also a reflection of how often participants considered sustainability when buying fish. That is, 4.2% of participants “always” considered sustainability when buying fish. This was significantly lower than the frequency at which they considered flavour, health/nutrition, or social responsibility when buying fish (p < 0.0001) (see Table 3, Table 4 and Table 5).

3.2. Influence of Descriptive Labelling on Liking and Willingness to Pay

The present study demonstrated that descriptive labels, including those focused on sustainability, can increase the liking and the amount that young highly educated consumers want to pay for salmon. However, descriptive labelling about sustainable fish feed as such did not increase the liking and “willingness to pay” more than labels focused on health and taste. This was even the case for those consumers who thought sustainability was very important. The influence of descriptive labelling depends on consumers’ liking of the product and consumers’ focus on taste and health. To our knowledge, this is the first study that investigated the influence of a variety of descriptive labelling (including sustainability) on the experienced liking of fish during consumption. The results can be explained and should be interpreted relative to, the positive halo effect descriptive labelling has on consumers.
The sustainability, flavour, and the nutrition/health descriptive label had the largest influence on participants’ liking of fresh salmon, whereas the social responsibility description did not seem to influence liking. Yet, consumers were more likely to pay more for salmon when it carried a descriptive label about social responsibility. A recent study found that although consumers are willing to pay more for socially responsible labelled seafood, the influence is weaker compared to the influence of sustainability labelling of seafood on the willingness to pay [11]. Potentially, consumers did not see a logical link between social responsibility and the taste of fish. Therefore, the direct benefit (i.e., a tasty salmon) of socially responsible fish is less prominent compared to the direct benefit of fish, which is labelled as flavoursome and/or nutritious. Previous research suggests that the links between healthy and tasty, and flavour description and tasty are rather salient for consumers [36].
Although the sustainability label increased the liking of fresh salmon, a similar influence was not found for hot smoked salmon. Potentially sustainability labels have more influence on products which are moderately liked, rather than those which, without the presence of a descriptive label, are already highly liked. This can partly be explained by a ceiling effect; recall that all hot smoked salmon was very well liked. Furthermore, descriptive labelling did increase the price consumers were willing to pay for hot smoked salmon. This suggests that the descriptive labels had some positive effect on the evaluation of smoked salmon. Nevertheless, the strong positive correlation between taste liking and willingness to pay suggests that taste is likely to be a major contributor to the amount of money consumers want to pay for salmon. It needs, however, to be noted that in the present study, the willingness to pay was always measured after participants tasted the salmon. Therefore, the increase in willingness to pay can be a result of the labels participants saw, as well as the taste they experienced.
Grouping consumers based on their health and taste focus is relevant as shown by the present study. Taste focused consumers place more emphasis on taste than non-taste focused consumers, which can explain why only the flavour descriptive label was able to increase the price these taste focused consumers were willing to pay for salmon. With this in mind, it is particularly interesting that those who were focused on sustainability did not react differently to the sustainability description compared to those who were less focused on sustainability. This suggests that the increase in liking and willingness to pay is likely a result of a general effect of a positive descriptive label, rather than a specific effect of a sustainability description. In general, the participants in the present research showed far more interest in flavour and health of food than in sustainability. This is important information for the fish industry. Especially because the participants we tested are, in general, interested in sustainability, but relative to flavour and health it seems to be less important.
It has previously been found that product labelling can influence consumers’ willingness to buy seafood [37]. What sets the present study apart from previous studies is that consumers actually tasted the fish rather than reporting what they thought the fish would taste like. The combination of market and sensory research (e.g., sensory marketing) is an approach which has gained attention and popularity in the past 15 years [38,39]. It is now well understood that external product cues can influence sensory perception and that the combination of sensory inputs needs to be in congruence with the marketing message. Like in the present study, these effects are usually small. However, due to the advances in food production and product development, differences between competitor products are often very small. Small but significant changes in liking, by using sensory marketing, can make a large difference in how a product performs on the market [38].
There are limitations which need to be taken into consideration when interpreting the results. This study was specifically focused on young highly educated, mainly female, adults. The reasoning behind this is that these consumers are more likely to be interested in sustainability [32,33,34,40]. If sustainability labelling has any effect on liking, it should at least have an influence on this select sample and it did to a certain extent. However, the sustainability label failed to be different compared to either a health or flavour focused label. In addition, at least for the participants in the present study, sustainability is not seen as important as health or flavour. This suggests that those working in the fish industry should at least temper their expectations of the potential attraction sustainability labelling has on young educated consumers. Having said that, the present study has been focused on a very select sample and follow up studies should be conducted with a sample of a more general population. Lastly, it is important to acknowledge that the present study only measured liking and not consumption per se. However, it has been repeatedly suggested that liking strongly correlates with consumption [41].

This research was partly funded by Ridley Agriproducts, via the Deakin Ridley Aquaculture Research Initiative.

The authors express their gratitude to Roy Palmer for technical and logistic support for the sourcing of the fish products used in the present study. 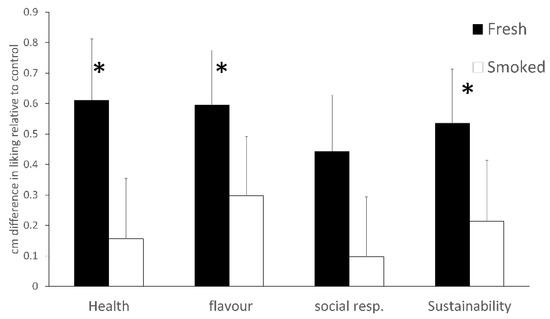 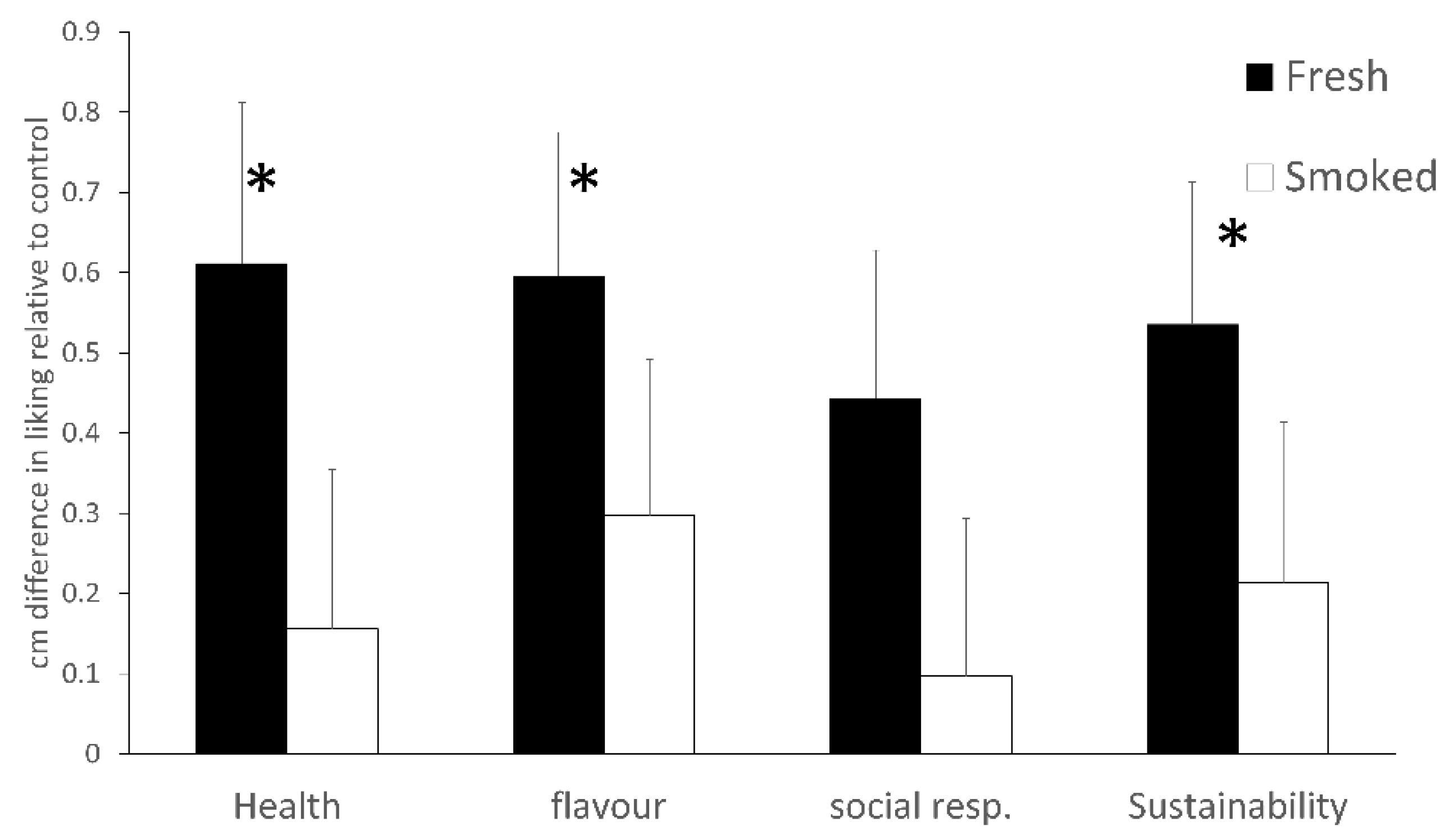 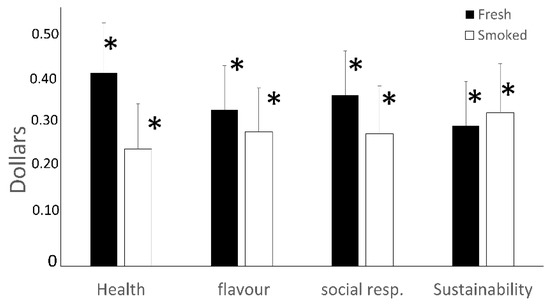 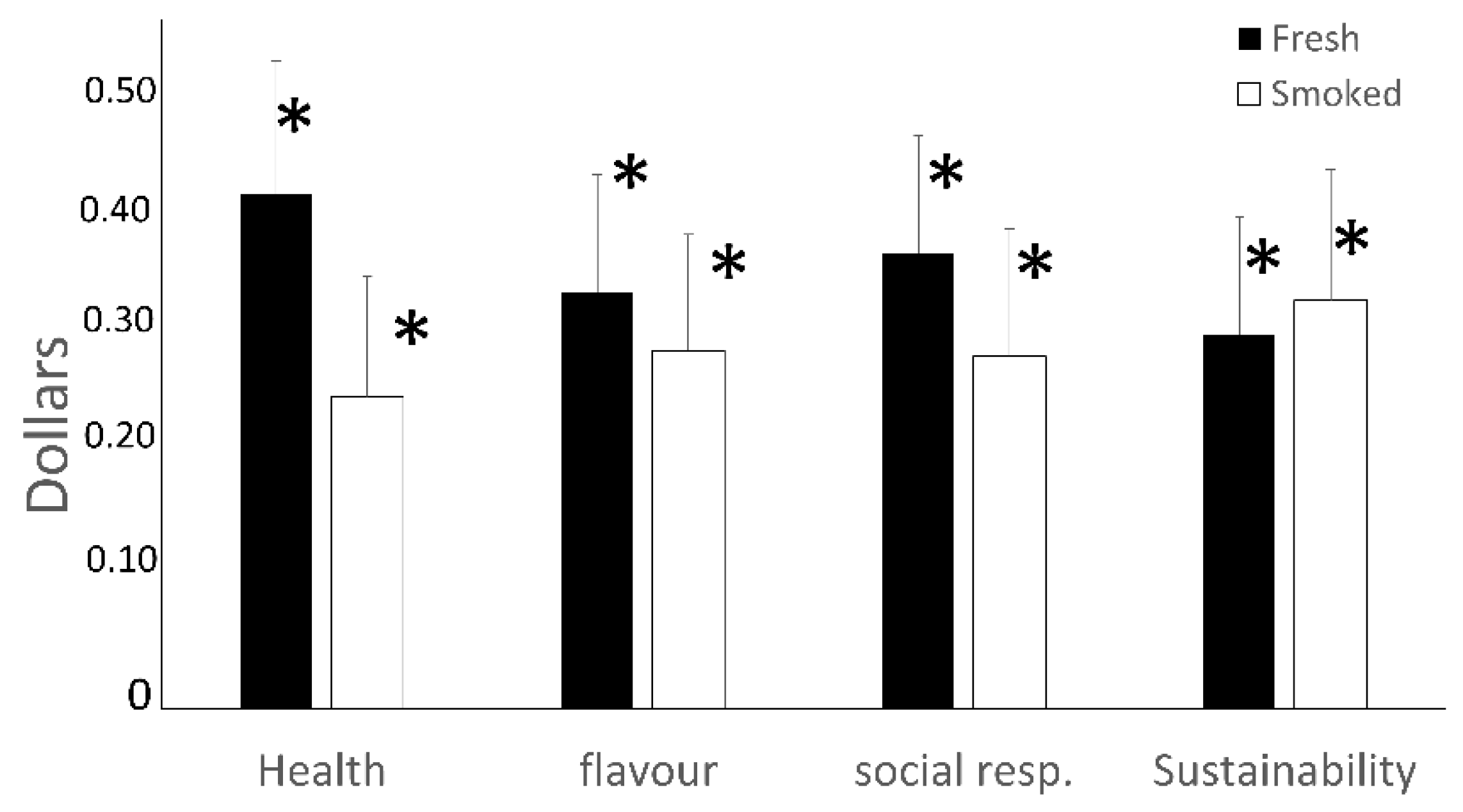