A methodology was developed for the prediction of the electrical properties of carbon nanotube-polymer nanocomposites via Monte Carlo computational simulations. A two-dimensional microstructure that takes into account waviness, fiber length and diameter distributions is used as a representative volume element. Fiber interactions in the microstructure are identified and then modeled as an equivalent electrical circuit, assuming one-third metallic and two-thirds semiconductor nanotubes. Tunneling paths in the microstructure are also modeled as electrical resistors, and crossing fibers are accounted for by assuming a contact resistance associated with them. The equivalent resistor network is then converted into a set of linear equations using nodal voltage analysis, which is then solved by means of the Gauss–Jordan elimination method. Nodal voltages are obtained for the microstructure, from which the percolation probability, equivalent resistance and conductivity are calculated. Percolation probability curves and electrical conductivity values are compared to those found in the literature. View Full-Text
Keywords: carbon nanotubes; electrical properties; conductivity; percolation; Monte Carlo; nanocomposites; nodal voltage; simulations carbon nanotubes; electrical properties; conductivity; percolation; Monte Carlo; nanocomposites; nodal voltage; simulations
►▼ Show Figures 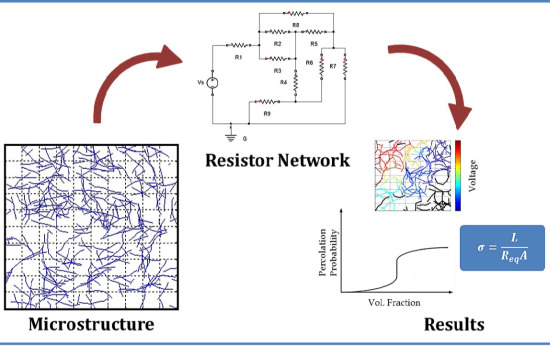