Treatment of Basal Cell Carcinoma with Electrochemotherapy: Insights from the InspECT Registry (2008–2019)
Previous Article in Journal

According to the latest WHO classification, giant cell glioblastoma is a variant of glioblastoma IDH-wildtype along with gliosarcoma and epithelioid glioblastoma [1,2]. It accounts for up to 5% of all glioblastoma cases [3].
Little information is known about this tumor due to the rarity of cases described so far. It is more common in the pediatric population, with a frequency of approximately 3% of all neoplasms, as opposed to less than 1% in adults [3,4]. It develops at younger ages than glioblastoma, having a predominance over the male gender and a frequent localization in the temporal lobe [1,3]. It has a better prognosis than glioblastoma or gliosarcoma [5]. Microscopically, it is characterized by multiple bizarre multinucleated giant cells (sometimes over 20 nuclei) with atypical mitoses. It is also identified by a palisade appearance of ischemic necrosis and a reticulin network [1,2]. Treatment is based on maximal safe resection followed by adjuvant radiochemotherapy, which can increase the patient’s life expectancy [4].
Due to its rarity in the adult population, the rarity in the literature, and the lack of reports in our country, we decided to highlight and publish this case of double recurrence of a giant cell glioblastoma with some morphological and genetic peculiarities, but also a brief review of the anatomical–pathological and genetic diagnosis methods.

A 58-year-old female patient was brought by relatives to the psychiatric ward for the following manifestations: insomnia, nausea, anxiety, vertigo, derealization, depersonalization, anomie, Broca’s aphasia, and olfactory illusions. Clinical and paraclinical investigations had suspected encephalitis. The patient was discharged with a slow favorable evolution.
Two months later, the patient presented with drowsiness, right hemiparesis, and headache. Computed tomography (CT) examination revealed a well-defined, isodense, iodophilic nodular lesion with a maximum diameter of 50 mm. It was located subcortial, on the left insular lobe associated with digitiform edema. The mass was suggestive for a secondary determination. She underwent surgery and the tumor fragments were examined histopathologically. The diagnosis was grade 4, giant cell glioblastoma. The patient received concomitant radiotherapy treatment (6 weeks with 2 Gy per session) and chemotherapy (temozolomide and carbamazepine 200 mg × 2/day). No tumor residue was identified on the control imaging. The clinical evolution of the patient was favorable during the treatment and for a short period after its completion.
Five months after the surgery, the patient presented to the neurosurgery department with dysphasia and left hemiparesis. CT and MRI examination revealed an intraneuraxial structure, on the left temporal lobe, with the appearance of a well-defined malignant tumor (Figure 1A,B). After the second surgery, the histopathological examination on the tumorectomy piece also pleaded for a giant cell glioblastoma.
Two months after the last surgery, the patient was readmitted to the neurosurgery department with fever and drowsiness. The CT examination showed a space-occupying mass, supratentorial, intranevraxial (left frontal lobe), with character of malignancy (Figure 1C). Before undergoing a new surgery, the patient died.

Macroscopically, a lesion with dimensions of 5/5/1.5 cm, of low consistency with elastic areas, and reddish-gray with yellow areas was observed (Figure 2A). During the sectioning, small cavity spaces occupied by saguinolent liquid were highlighted. Both histopathological evaluations highlighted a proliferation of glial cells with moderate cyto-nuclear pleomorphism to which numerous multinucleated giant cells were associated, without the presence of macrophages. In addition, glomeruloid-type microvascular proliferation was observed as well as limited areas of necrosis with perinecrotic pseudopalysis (Figure 2B). Morphometric analysis revealed multinucleated giant cells with dimensions between 50 and 81 µm (Figure 2C). Immunohistochemical tests showed immunopositivity for: GFAP (+++), S100 (++), Vimentin (++), Nestin (+++), ATRX (++), Synaptophysin (+++), and KI-67 (20%) (Figure 2D–J). Immunohistochemical tests showed immunonegativity for IDH1 R132H (–), SOX10 (–), EGFR (–), p53 (–), EMA (–), and NeuN (–) (Figure 3). Each immunohistochemical section was tested by a positive control slide.
Tissue samples were used to determine p53 (TP53), CDKN2A, p73, and glioma tumor suppressor candidate region genes 1 and 2 genes (GLTSCR1 and GLTSCR2) status by fluorescence in situ hybridization (FISH). We chose these genes because they are involved in apoptotic activity and have an impact on the aggressive potential. In the case presented, most cells (78% of analyzed cells) had one red and two green signals, which means a p53 gene hemizygous deletion status (Figure 4A,B). Only a few nuclei showed only two green signals, signifying a homozygous deletion of the p53 gene. The rest of the evaluated cells showed a disomic status. In the case of the CDKN2A gene, the cells had a green signal and two red ones, which means a status of hemizygous deletion of the gene (Figure 4C). After hybridization with the 1p36 probe (red signal) and the 1q25 probe (green signal) showed deletion of the 1p36 region. That means the presence of the p73 gene deletion was in approximately 85% of the nuclei; the rest had a disomic status (Figure 4D). Regarding the second sample, results showed the absence of deletion in the 19q13/19p13 regions in most of the investigated nuclei. In some areas, nuclei with hemizigotic deletion of the 19q13.33 region were noted (Figure 4E,F). However, we cannot say that this was a co-deletion of 1p and 19q, because we identified only deletions of some regions, not of the entire chromosomal arm, but we appreciated that this case associated only the deletion of the p73 gene.

A non-suggestive clinical picture corroborated with an eloquent imaging for a tumor with a high degree of malignancy are major impediments in the diagnosis of a giant cell glioblastoma. It should be noted the importance of histopathological, immunohistochemical, and genetic tests in establishing a complete diagnosis and are implicit in providing effective treatment. Even in the presence of some positive prognostic factors and adequate treatment, its aggression is marked both by its ability to recur and by leading to exitus in a short period of time. The study outlined its objectives by presenting a rare case of giant cell glioblastoma as well as compiling a diagnostic panel that assesses aggression.

Ethical review and approval were waived for this study due to reason that we did not reveal the person’s identity or major clues about its identity. 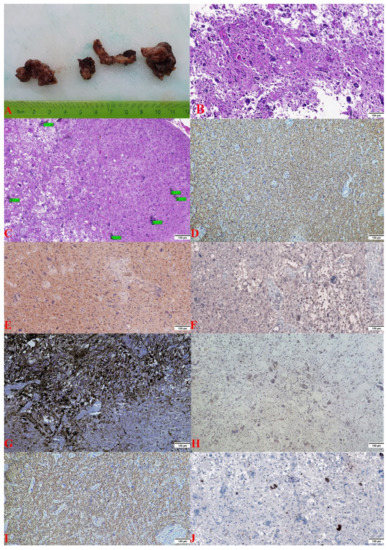 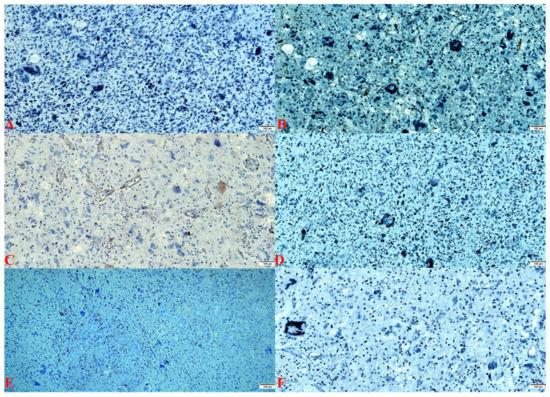 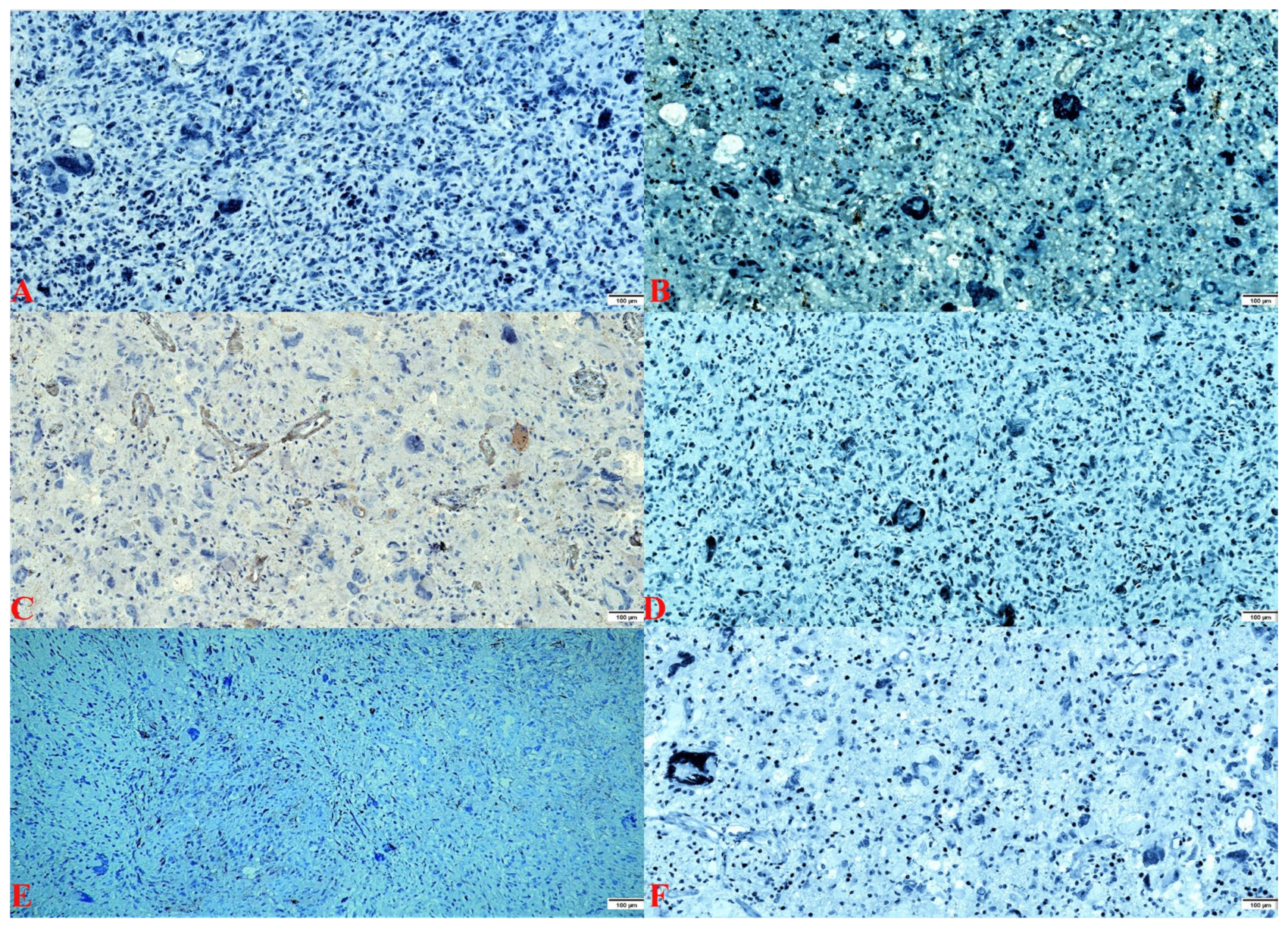