Participants were psychologists and medical doctors (NP = 37, NMD = 3) attending a four-year specialization in Systemic Psychotherapy at an Italian Institute of Family Therapy (Females n = 34, Males n = 6; Age: M = 34.61, SD = 7.13 years). We approached 48 persons, 42 of whom initially agreed to participate in the research project. Before the actual start of the project, a participant withdrew from the research, and the last participant agreed to be not included in the study due to the completion of the Williams experimental design reached at the fortieth participant. Participants had theoretical, but not practical, knowledge of EMDR, BSP, and BSM. The criteria for their inclusion in the study were: not suffering of a severe clinical syndrome or a personality disorder (self-reported by participants, and assessed in the screening phase of our study; see below), and having a normal neuropsychological profile in the areas of memory and lexical access (also assessed in the screening phase). For possible adverse effects resulting from the processing of the distressing memories, we tested the interventions on a sample of Psychologists and MDs willing to seek help from a therapist if necessary. The professional experience of the participants also made it possible to tell the researcher, in the follow-up session, their personal impressions about the interventions and the overall experiment. Informed consent for the research assessment and procedure was obtained from all participants. The procedures were approved by the local Ethics of the University of Udine, and were in accordance with the Helsinki Declaration guidelines.

Millon Clinical Multiaxial Inventory (MCMI-III): The Italian version of the MCMI-III is a self-report personality questionnaire composed of 175 true–false items (for example, item 40: “I guess I’m a fearful and inhibited person.”) that shows Cronbach’s alpha coefficients mainly comparable to those in the original American version (i.e., α = 0.73–0.95) [37,38]. Based on the DSM-IV classification system, MCMI-III assesses personality patterns and clinical syndromes. In our study, the Base Rate scores in the Severe Clinical Syndromes scales (Thought Disorder, Major Depression, Delusional Disorder) and in the Severe Personality Disorders scales (Schizotypal, Borderline, and Paranoid) were computed.
Italian Short Neuropsychological Assessment (Esame Neuropsicologico Breve 2-ENB2): The ENB2 is a battery of fifteen screening neuropsychological tests for adults [39]. Only two tasks were used: (1) the short story test [40] to evaluate long-term verbal memory (participants were told a story consisting of 28 basic elements, and asked to tell it again immediately after listening, and after 10 min; the test score consisted of the number of elements recalled during the participants’ second retelling), and (2) the phonemic fluency test to assess individuals’ lexical access and retrieval (participants were asked to tell words beginning with the letters C, P, and S; for each of the three letters, one min was given to name as many words as possible; the test score was the average number of words generated in the three lists).
Rey–Osterrieth Complex Figure Test (ROCF): The ROCF test [41] was employed to assess long-term visual memory. Participants were requested to observe and copy a complex line drawing. Scoring was obtained on the basis of the delayed reproduction of the figure after 10 min. Individual raw scores were converted to Equivalent Scores (ranging from 0 to 4) on the basis of the age-, education-, and gender-matched average scores of a large control sample of 280 healthy adult individuals [42].

Subjective Units of Disturbance (SUD) Scale: The SUD Scale is a one-item subjective distress scale ranging from 0 to 10, originally developed by Wolpe [43]. In our study, the SUD Scale was used to measure subjective distress experienced after each memory telling. Participants were asked to rate on a 0-to-10 scale how disturbed they were by the memory they had just told the researcher (i.e., “On a scale of 0–10, where 0 is not disturbance/distress or neutral and 10 is the highest disturbance one can imagine, how disturbing does the memory feel to you now?”). The SUDS were completed the same number of times in all of the conditions. During memory processing with EMDR and BSP, we generally used the term “activation” instead of “distress/disturbance” (see below for more details on EMDR and BSP interventions). Psychotherapy outcome research supports SUD scores as a global measure of distress level [44] with good psychometric properties [45]. In line with the EMDR approach [1], SUD scores are considered “high” when rated ≥6.
Memory Telling Duration (MTD): In all experimental sessions (described below), we measured the length of time a participant spent recounting each memory to the researcher. This measure was hypothesized to be connected to the SUDS assuming that, as the memory processing took place, it was possible to find both a decrease of SUD scores, and a reduced length of time spent to recounting the memory.

After memory telling at Baseline, each memory was pseudo-randomly assigned to one of the four interventions (EMDR, BSP, BSM, BR). In two 4 × 4 ANOVAs with repeated measures, one for SUDs and the other for MTD values, the within-subject factors were Session (“Baseline”, “Pre-Intervention”, “Post-Intervention”, “Follow-up”) and Intervention (“BR”, “BSM”, “BSP”, “EMDR”).
The Greenhouse–Geisser estimate of sphericity was used to correct for violations of homogeneity of variance (indicated as p[GG]). Adjustments for multiple comparisons of post-hoc tests were performed using Bonferroni/Holm correction. The significance threshold of p = 0.05 was adopted in all analyses. All analyses were performed using the free software environment, R. The data that support the findings of this study are available from the corresponding author, upon request.

Our research produced relevant results showing the beneficial effects of single 40-min sessions of EMDR, BSP, or BSM on non-clinical individuals’ processing of distressing memories. We found that EMDR and BSP were comparable in terms of efficacy, and similarly affected how the distressing memories were reported in terms of conciseness. These results were primarily attributed to the central role of paying attention with equanimity to one’s body sensations during memory processing.

The study was conducted in accordance with the Declaration of Helsinki, and approved by the local Ethics Committee of the University of Udine (protocol code CGPER-2016-11-23-01) for studies involving humans.

The data that support the findings of this study are available on request from the corresponding author, Fabio D’Antoni.

The authors would like to acknowledge the contribution of Esterina Pedone (Director of the “Naven” Institute of Udine) for the valuable support provided in making this research possible. 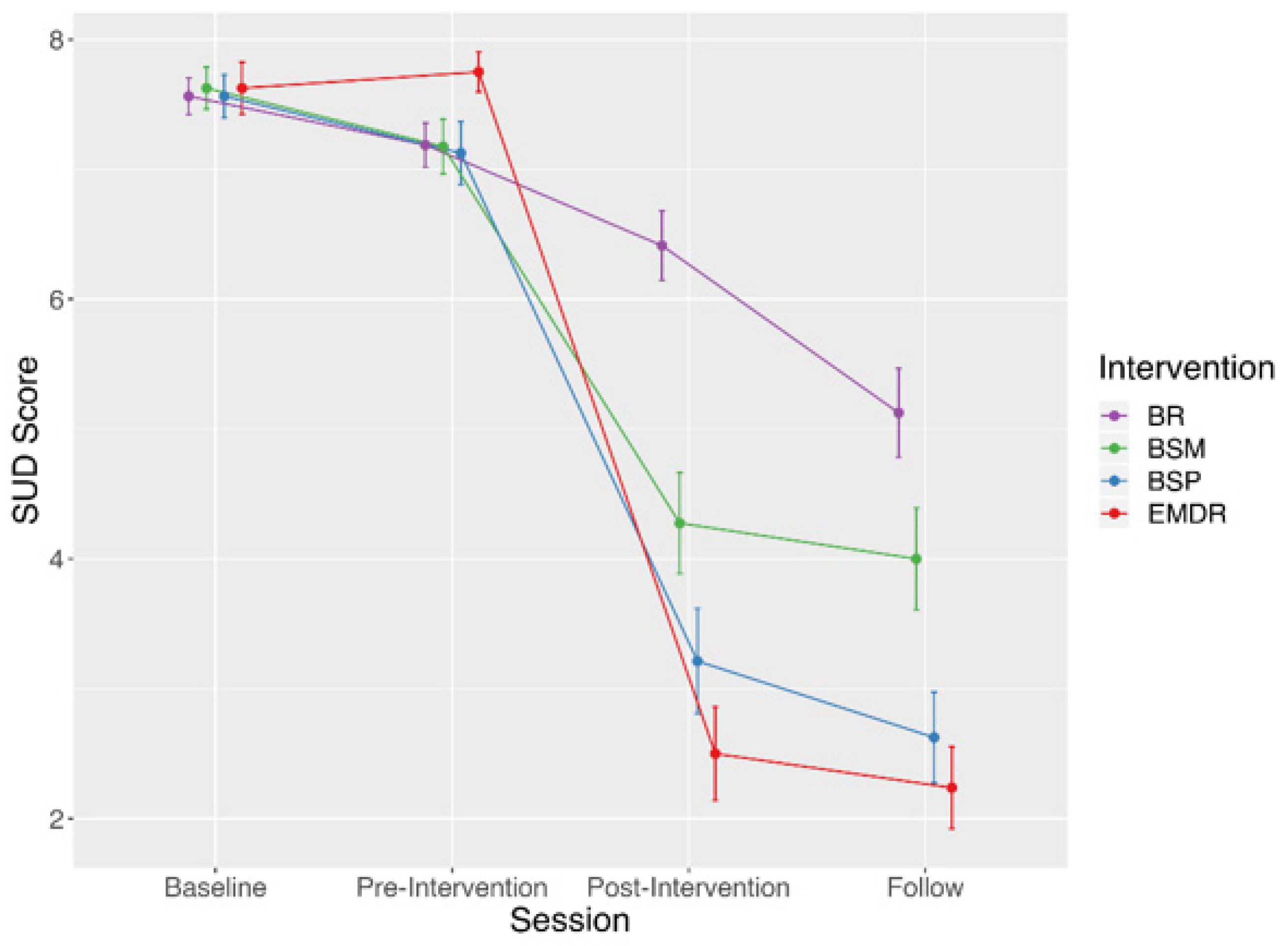