The Condition of Air Pollution in Kraków, Poland, in 2005–2020, with Health Risk Assessment
Previous Article in Journal

Effectiveness of Lifestyle Interventions for Prevention of Harmful Weight Gain among Adolescents from Ethnic Minorities: A Systematic Review

Annisa B. Tesfaye 2 and

Access to safe water, sanitation, and hygiene (WASH) is critical for preventing the spread of neglected tropical diseases (NTDs) including leprosy. WASH-related transmission factors remain largely unexplored in the leprosy transmission cycle. The aim of this project is to better understand WASH exposures among leprosy cases through a case-control study in North Gondar, Ethiopia. We hypothesized that leprosy cases were more likely to have inadequate WASH access and were more likely to have concurrent schistosomiasis, as schistosomiasis immune consequences may facilitate leprosy infection. Forty leprosy cases (forty-one controls) were enrolled, tested for Schistosomamansoni, administered a demographic and WASH survey, and assigned a WASH index score. WASH factors significantly associated with leprosy on adjusted analyses included open defecation (aOR = 19.9, 95% CI 2.2, 176.3) and lack of access to soap (aOR = 7.3, 95% CI 1.1, 49.9). S. mansoni was detected in 26% of participants and in stratified analysis those with leprosy had a 3.6 (95% CI (0.8, 15.9)) greater odds of schistosomiasis in districts bordering the lake, compared to 0.33 lower odds of schistosomiasis in districts not bordering the lake (95% CI (0.09, 1.2)). Overall, results suggest that leprosy transmission may be related to WASH adequacy and access as well as to schistosomiasis co-infection.
Keywords: leprosy; NTD; WASH; water; sanitation; hygiene; Ethiopia leprosy; NTD; WASH; water; sanitation; hygiene; Ethiopia

Neglected tropical diseases (NTDs) infect over two billion of the world’s poorest people and disproportionately burden low- and middle-income countries (LMIC), which have a higher likelihood of poor water, sanitation, and hygiene (WASH). Treatment and control of NTDs is included in Goal 3 of the United Nation’s Sustainable Development Goals [1].
Leprosy, commonly known as Hansen’s disease, is a chronic infectious disease caused by Mycobacterium leprae, and is classified as an NTD. An active leprosy infection causes deforming skin lesions and permanent peripheral neuropathy and physical deformity if it is not treated early. Despite multidrug therapy (MDT) and recent public health interventions, close to 200,000 new leprosy cases are reported yearly with 14 LMICs reporting over 94% of all new disease [2]. While new leprosy cases in Ethiopia have declined each year, it remains a public health problem. In 2016, Ethiopia reported 3692 new leprosy cases and an incidence of 3.52 per 100,000 people [3].
M. leprae is associated with a complex immune response that differs based on type of leprosy: multibacillary (MB) and paucibacillary (PB). MB versus PB leprosy case types are classified by the number of lesions and results of skin smear tests [4]. MB leprosy is associated with a weakened Th1 immune response and an upregulation of Th2 mediated cytokines and inflammatory markers. PB leprosy is accompanied by a strong Th1 immune response. The majority of transmission is from MB leprosy [2].
The same causative agent, M. leprae, causes PB and MB leprosy types, but the type of leprosy a person develops appears to be dependent on the individual’s immune system’s response to the bacteria. Innate immune genetic variability in toll-like receptor polymorphisms is thought to be a factor related to the leprosy type a person exhibits. Indeed, recent studies estimate that close to 95% of the world’s population is not susceptible to leprosy [5]. Leprosy is thought to be transmitted primarily through nasal secretions or skin lesions of infected individuals; however, recent evidence suggests that zoonotic reservoirs, trauma-related skin-to-skin transmission, and environmental reservoirs may exist.
Schistosomiasis is another NTD caused primarily by three Schistosoma species, Schistosoma mansoni, S. haematobium, and S. japonicum. Schistosoma are transmitted through cercariae, which enter through the skin when a human comes into contact with water contaminated by human waste [6]. Recent studies have suggested that soil-transmitted helminth infection may facilitate or increase the risk of leprosy infection [7]. Helminth infections typically up-regulate the Th2 immune response and down-regulate the Th1 immune response, meaning the diminished Th1 response may lead to a lesser likelihood of controlling M. leprae infection, and therefore a higher likelihood of leprosy, in particular, MB leprosy [8]. A geographic association of overlapping schistosomiasis and leprosy was found in a co-endemic area of Brazil [7]. In Ethiopia, schistosomiasis infections affect close to five million persons and close to 4000 new leprosy cases are diagnosed each year [9]. Due to overlapping endemicity, this makes Ethiopia a good candidate to further study associations between the two infections.
Environmental factors and exposure through poor WASH conditions are associated with several NTDs including schistosomiasis, trachoma, and soil-transmitted helminths [10]. Despite several studies that have detected potentially viable M. leprae in water and soil samples and established survivability of M. leprae in soil, leprosy is largely ignored as a water or soil associated infection [11,12,13]. Even the recent WHO 2016-2020 Global Leprosy Strategy fails to mention water quality, quantity, and access as a tool for managing or preventing disease [14].
This study investigated the strength of association of WASH factors with leprosy infection through an unmatched case control study and further explored schistosomiasis-leprosy co-infections in the Amhara Region of Ethiopia. We hypothesized that poor WASH factors would be associated with a higher odds of leprosy infection and that there would be higher odds of having leprosy among subjects with schistosomiasis.

A case-control study was conducted in May–October 2018 in the North Gondar, South Gondar, and Gondar Zuria Zones of the Amhara Region of Ethiopia, an area of 171,000 square kilometers, with a population of approximately 17 million people (50.2% male and 49.8% female) with endemic schistosomiasis and leprosy [15]. Study area is depicted in Figure 1. Leprosy cases were identified by a convenience sample via local leprosy registries and recruited at associated dermatology and family health clinics. Cases were defined as adults 18 and older with a clinical leprosy diagnosis presenting to Gondar area health district offices. Cases were limited to leprosy patients who were currently undergoing treatment or had been diagnosed within the last year. Pregnant women, unconfirmed cases, and those who had finished treatment were excluded as cases. Controls were selected from patients present at health offices without suspected leprosy (convenience sample), without previous leprosy infection, and who did not have close contact with a suspected or confirmed leprosy case. Exclusion criteria included children under the age of 18 and pregnant women. Disability grade, leprosy type, diagnosis date, and treatment medications were recorded for each case.

Schistosomiasis testing was performed on all subjects using Schisto POC-CCA™ rapid test (Schisto POC-CCA cassette-based test; Rapid Medical Diagnostics, Pretoria, South Africa). These tests detect active S. mansoni infections in urine specimens. The sensitivity for the rapid test is 100% in intensities higher than 400 eggs per gram of feces and 70% in lower burden positive cases. The lowest detectable positive is with a worm burden of approximately 50 worms [18]. We performed the rapid test by collecting urine samples from participants and dropping 100 microliters of urine in the well on the cassette. Results were read after 20 min. Invalid tests were repeated.

A composite WASH index was created using the JMP service ladders. Scores were determined by classifying study participants’ level of service based on their answers to corresponding questions, as identified by the JMP core questions on water, sanitation, and hygiene for household surveys [17]. The index was scored on a scale of 0–5 for sanitation and drinking water and 0–3 for hygiene (Table 2) [19].

Sample size was determined using the OpenEpi Sample Size for Unmatched Case Control calculator [20]. There are very few data to guide calculation of a sample size for the associations of WASH and leprosy. Since schistosomiasis is a WASH exposure and a variable in this study, we used published data on the associations of helminths and leprosy, which showed an odds ratio of four for the association between helminths and leprosy, to calculate sample size for this pilot study [7]. Based on an estimated schistosomiasis burden of 20–25% prevalence in North Gondar Zone, sample size was calculated using an alpha of 0.05 and power of 0.8, resulting in a goal of 40 cases and 40 controls. Data collected from the questionnaires was entered into SAS v. 9.4. Descriptive statistics were tabulated using frequencies, means, median, and standard deviations. Unadjusted odds ratio estimates were calculated first and then a logistic regression model was fit using WASH exposure factors including water source (improved or unimproved), premises’ access to water, water treatment, time to fetch water, access to soap, handwashing practices, sanitation facility use, and all potential confounders including sex, age, and education status. Sex and age have a known association with leprosy, typically with more leprosy found in men [5,21]. More leprosy is likely found in men due to social factors rather than underlying biological factors [22]. Education was included as a marker of socioeconomic status (SES) as some studies have shown an association with leprosy and poor SES [21,23]. Education was dichotomized as less than primary education and at least a primary education based on previous studies [21]. Stratified odds ratio estimates for leprosy-schistosomiasis co-infections were calculated after stratifying by proximity to Lake Tana. Woredas bordering Lake Tana were classified as close and woredas not bordering Lake Tana as far.

Study participation was voluntary, without incentives or compensation for study participants. The study was approved by the Emory University (00103244) and University of Gondar (O/V/P/RCS/05/1467/2018) Institutional Review Boards. Informed verbal consent was given for all participants.

In conclusion, our study found that WASH factors including water source, premises’ access to water, access to soap, handwashing practices, and open defection are related to leprosy infection. Schistosomiasis infection, however, was not found to be significantly associated with leprosy infection. Overall, this project supports the hypothesis that WASH conditions are associated with leprosy transmission and warrant further investigation. Further investigations with larger sample sizes will determine the extent of the association between leprosy and WASH factors.

This research was funded by charitable contributions from the Order of St. Lazarus, U.S. and by the Rollins School of Public Health Global Field Experience Financial Award.

We would like to thank the faculty, clinicians, and staff at the University of Gondar hospital and surrounding health centers as well as all study participants for making this study possible. 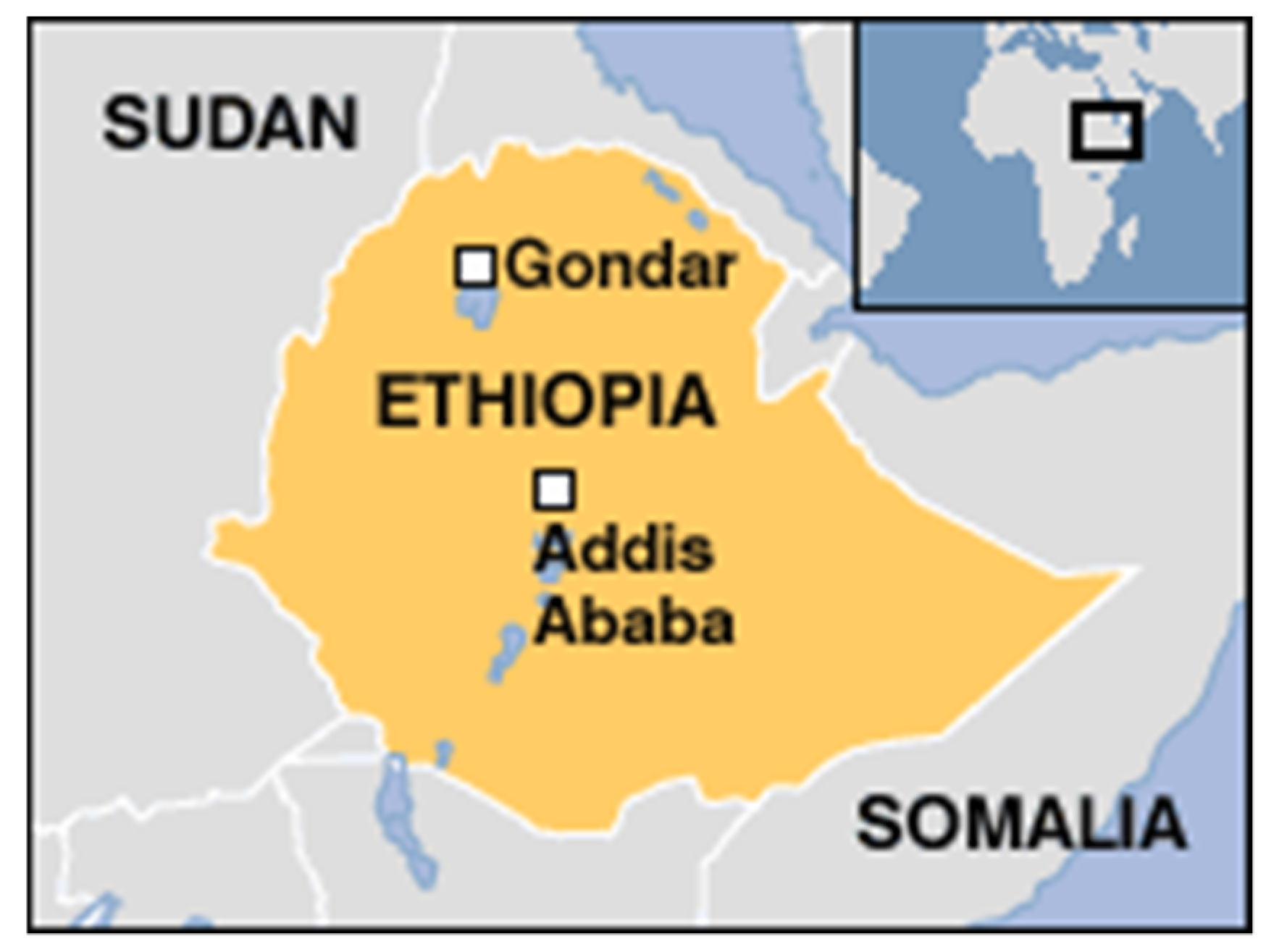