Corneal endothelial cells (CEnCs) are located on the inner surface of the cornea and play an essential role in keeping corneal transparency by pumping out water from the corneal stroma [1]. Reduction in the number of human CEnCs (hCEnCs) due to injuries causes permanent corneal edema [2]. Until now, hCEnCs have been considered unable to proliferate in vivo [2]. Corneal transplantation has been considered the only treatment option for hCEnC diseases [3]. However, there is a global shortage of corneal donors and the survival time from cornea acquisition to transplantation is relatively limited [4]. Thus, it is necessary to develop a new treatment or a new strategy to alleviate the lack of required donor corneas. Furthermore, stem cells for hCEnCs have been found in the transition zone between the trabecular meshwork and the cornea and the possibility of inducing regeneration of hCEnCs in Fuchs corneal endothelial dystrophy (FECD) has been suggested [5], although severe damage to hCEnCs results in bullous keratopathy requiring corneal transplantation [6]. The development of a new treatment strategy has been suggested to protect and regenerate hCEnCs in vivo.
Rho-associated protein kinase (ROCK) inhibitors were developed as drugs to lower intraocular pressure [7], but it has been suggested to have an effect in hCEnCs [8,9]. It has been reported to promote the adhesion of cultured hCEnCs to the stroma in bullous keratopathy [10] and to promote wound healing after transcorneal freezing in FECD [11]. Ripasudil, another ROCK inhibitor, has a corneal endothelial protective effect in cataract surgery for patients with low hCEnC density [9]. However, both preclinical and clinical studies that have evaluated ROCK inhibitors have reported conjunctival hyperaemia at high incidence rates, therefore the therapeutic potential of most ROCK inhibitors is limited by adverse effects.
Sovesudil, a novel ROCK inhibitor, has been developed to improve ROCK affinity and to degrade rapidly to reduce side effects such as conjunctival hyperemia [7]. Sovesudil, like other soft drugs and are designed to undergo metabolic inactivation by controlled conversion of the active parent molecule into a predictable, nontoxic metabolite [12,13]. ROCK is an effector molecule of RhoA signaling and have the multi-functions including the effect on cytoskeleton and stemness [14,15]. ROCK inhibitors are thought to contribute to the regeneration of hCEnCs by reducing oxidative stress and senescence, inducing mesenchymal-epithelial transition (MET), and inhibiting transforming growth factor-beta (TGF-β) signaling [16,17,18]. In this study, we investigated whether a novel ROCK inhibitor, sovesudil, has the capacity to regenerate hCEnCs.

2.3. Effect on the Cell Adhesion Assay

Cell adhesion was evaluated using Crystal violet assay. Cell adhesion was higher in Y-27632, sovesudil and PHP-0961 both at 2 h and 6 h compared to control (Figure 3A,B). Cytoskeleton pattern was evaluated using phalloidin staining (Figure 3C,D). The cytoskeleton was rearranged to the cell borders and the F-actin intensity was decreased with the application of ROCK inhibitors. β-catenin was immunostained and clumping of β-catenin was shown in cells treated with Y-27632, sovesudil, and PHP-0961 (Figure 3E).

This study was performed in accordance with the tenets of the Declaration of Helsinki and was reviewed and approved by the Institutional Review Board/Ethics Committee of Hallym University Kangnam Sacred Heart Hospital (IRB No. NON2020-003). hCEnCs were cultured as previously described [6] and Figure S1. The cornea was purchased from Eversight (Ann Arbor, MI, USA) and the ages of donors ranged from 25 to 32 years. Cells were treated with Y-27632, sovesudil (also known as PHP-201; pH Pharma, Seoul, Republic of Korea), or PHP-0961 (pH Pharma) for 24 h.

BrdU proliferation assay kit (Roche Diagnostics, GmbH, Mannheim, Germany) was used for cell proliferation assessment. Briefly, cells (5 × 103 cells/well) were placed in 96-well plates and incubated for 24 h in a humidified atmosphere containing 5% CO2. Cells are treated with ROCK inhibitor and BrdU solution is added to each well and then incubated for 24 h. After removing the media, the plate was incubated in the FixDenat solution for 30 min at room temperature. The plated was then incubated with an anti-BrdU-POD solution for approximately 90 min at 25 °C. Substrate solution is added to each well, and the plate was incubated for 20 min at room temperature. Stop solution was added to each well and the optical density was measured at 450 nm using a microplate reader (Synergy HTX). Proliferation rates were expressed as the percentage of controls after subtraction of the corresponding blanks.

The hCECs were cultured in a slide chamber and treated with ROCK inhibitors and incubated for 24 h. After removing the media, they were washed with phosphate-buffered saline (PBS), and fixed for 20 min in 3.7% (v/v) formaldehyde solution. Cells were permeabilized for 10 min with 0.5% (v/v) Triton X-100 and blocked for 1 h with 1% (w/v) bovine serum albumin (BSA) at room temperature. After washing with PBS, the cells were incubated overnight with either rabbit anti-Ki67 antibody (sc-23900, Santa Cruz, CA, USA), ZO-1 (sc-10804), β-catenin (ab32572), integrin β1 (sc-18887), SOX2 (sc-365823), N-cadherin (sc-59987), or E-cadherin (sc-8426) at 4 °C, and then washed with PBS. Cells are incubated with fluorescein isothiocyanate-conjugated goat anti-rabbit IgG antibody (1:100) or anti-mouse IgG antibody for 1 h at 37 °C in the dark. Cells were counterstained with Hoechst33342 nuclear staining dye. After extensive washing with PBS, the slides were mounted in a drop of mounting medium to reduce photobleaching. Negative control staining was conducted in parallel with the omission of the primary antibodies.

Cells are cultured at confluence in 12-well culture plates. A wound was scratched with scratcher (SPL) and observed for the migration area. Cells in suspension were washed off with PBS. The culture medium was replaced with medium containing ROCK inhibitors. The distance between the wound, that is, the distance between cells that exist at one edge of the linear defect and those that exist at the opposite edge of the defect after 0 and 24 hrs of incubation.

Cells were allowed to adhere to the culture plate for over 2 or 6 h. The cultured confluent cells were washed twice with PBS and then pretreated 30 min with ROCK inhibitors. Cells were trypsinized, resuspended in their corresponding culture medium, filtered and adjusted to an equal cell number of 2 × 105/mL. Fifty μL of cell suspension was added per well into a 96-well plate. Cells were allowed to adhere to the matrix for 2 or 6 h; nonadherent cells were then washed off with PBS. Cells were fixed with 4% paraformaldehyde for 10 min at RT and stained with 0.1% crystal violet solution for 60 min. Plates were extensively washed with water to remove excessive staining, and the dye was solubilized with 10% acetic acid. Absorbance at 570 nm was quantified on a microplate reader.
Adhesion morphology is assessed on hCEnC cultures by actin staining marker phalloidin. Cells treated with ROCK inhibitors were allowed to adhere to the FNC coating for 6 h and then non-adherent cells were washed off with PBS. Actin was directly stained with Alexa Fluor 488H phalloidin and DAPI nuclear staining and cells were observed under fluorescence microscope (DMi8; Leica, Wetzler, Hesse, Germany).

Porcine corneas were purchased locally, scratched and treated with ROCK inhibitor. The live/dead cell assay (Invitrogen) was used for the cell viability and toxicity assay in porcine corneas. Corneas were incubated with ROCK inhibitors for 24 h and washed in PBS, placed endothelial side up in a sterile Petri dish, incubated for 45 min at 37 °C with 100 µL of Hoechst 33342 (10 µM), Ethidium homodimer-I (4 µM) and calcein-AM (2 µM), and then gently rinsed in PBS. A radial cut was performed on corneas and the corneas were flat-mounted. Images were obtained using a microscope (DMi8; Leica). The calcein stained cells are calculated, as was the ratio of viable surface area to total analyzed area. The mortality rate was defined as the number of positive Ethidium nuclei out of the total number of cells.

Corneal endothelial side was scratched for making a wound with plastic pipette tip and was observed once a day until total wound closure of the first cornea. A calibrated endothelial wound, using a 10 μL plastic pipette tip, was performed on whole corneas center. Corneas were then stored at 32 °C in a dry incubator. Every day wound healing was observed after corneas incubation with 0.9% sodium chloride under light microscope until closure.

Corneal endothelial side was stained using alizarin S red after totally wound closure of the first cornea. Glutaraldehyde was used for fixation and the corneal endothelium was observed.

Across all experiments, the results of sovesudil and PHP-0961 were equal or superior to the results of the ROCK inhibitor positive-control, Y-27632. Novel ROCK inhibitors have the capacity to regenerate hCEnCs by enhancing cell proliferation and adhesion between cells.

This research was funded by pH Pharma.

This study was performed in accordance with the tenets of the Declaration of Helsinki and was reviewed and approved by the Institutional Review Board/Ethics Committee of Hallym University Kangnam Sacred Heart Hospital (IRB No. NON2020-003).

Corneas were purchased from Eversight (Ann Arbor, MI, USA), which acquired informed consent for the use of all corneas collected and cultured for the study.

All the data utilized in this study are available upon request to the corresponding author.

K.W.K. and Y.J.S declare no conflict of interest. S.L. is an employee of pH Pharm. The funders had no role in the collection, analyses, or interpretation of data, in the writing of the manuscript, or in the decision to publish the results. 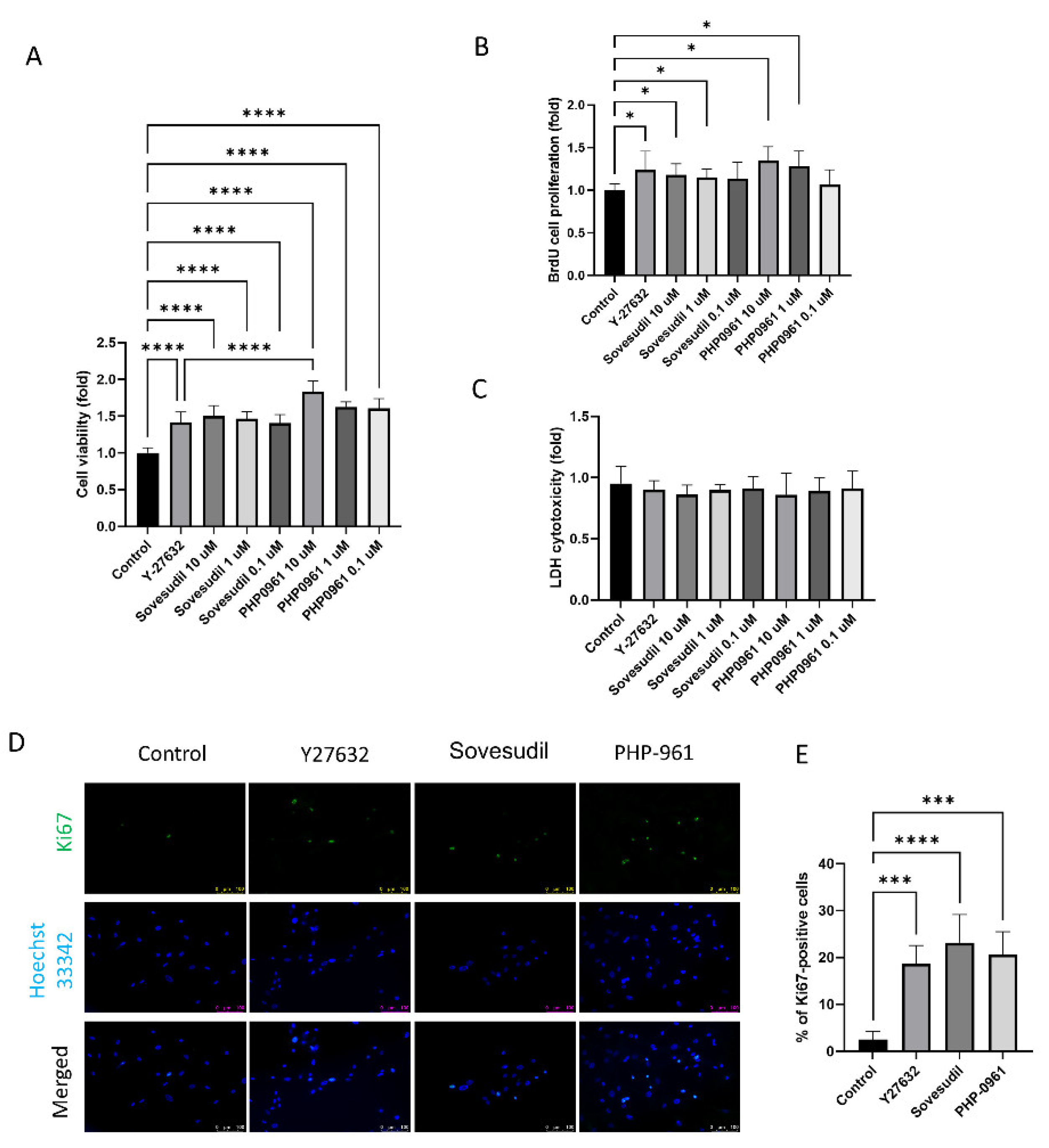 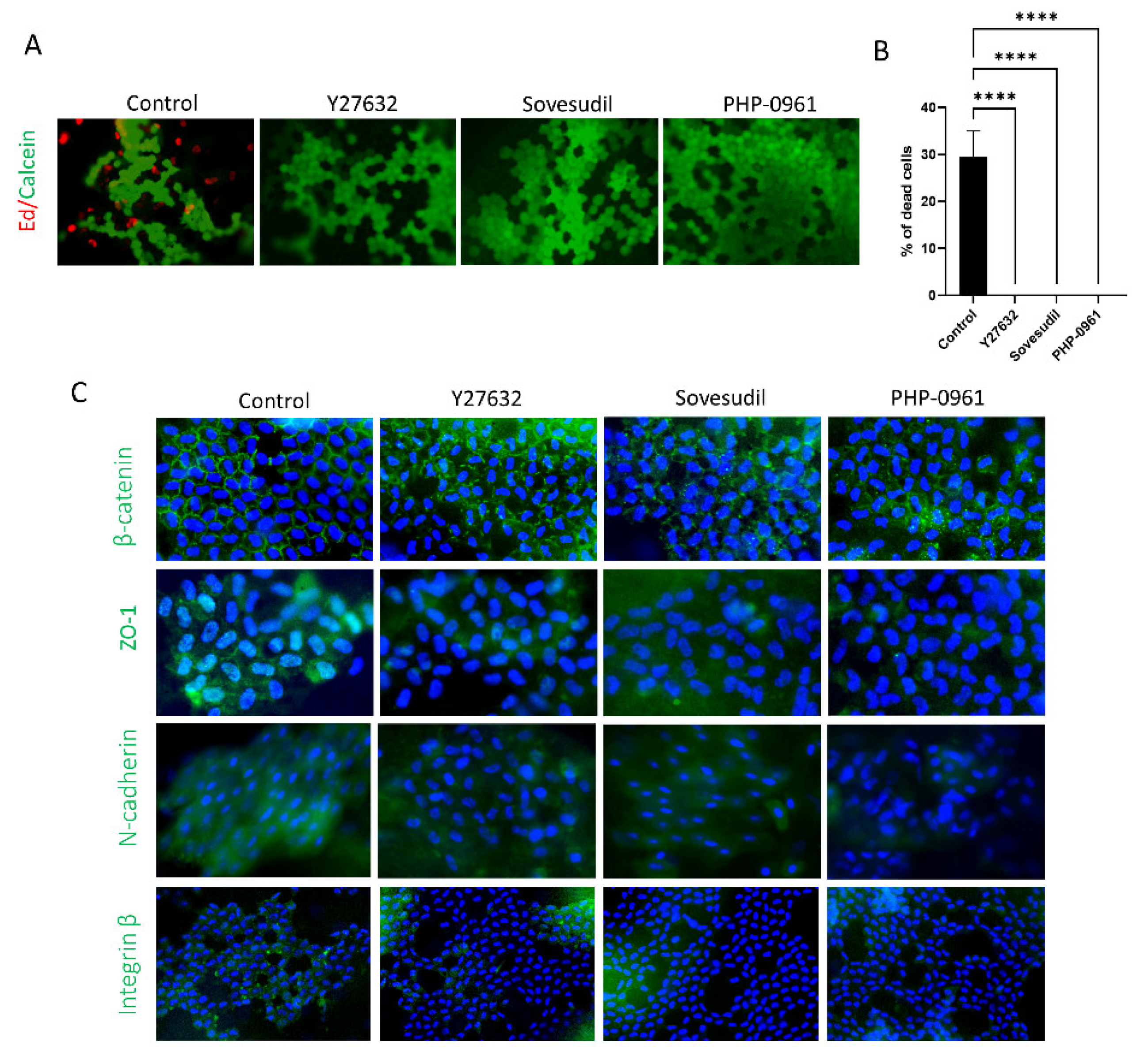 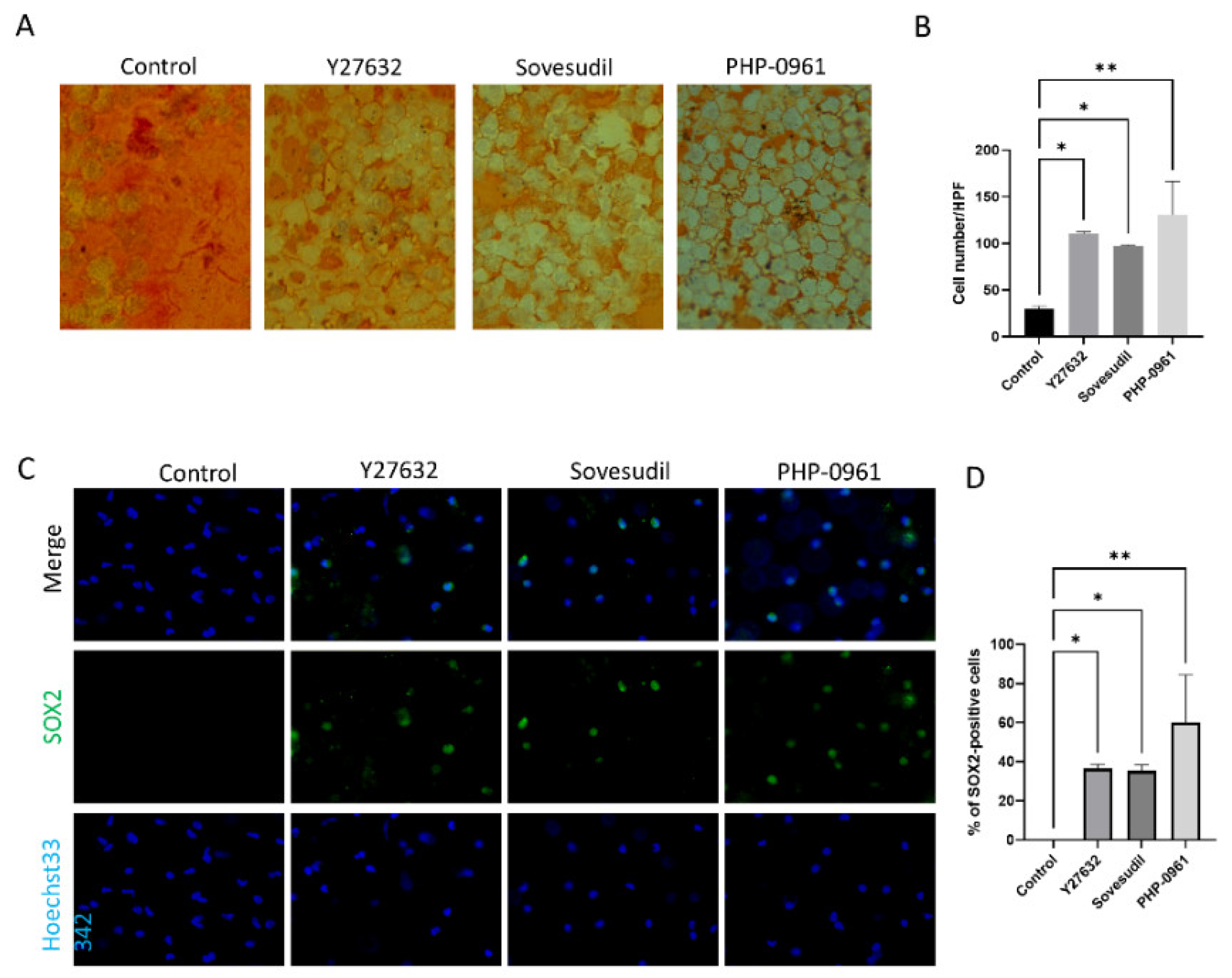