Among the rice NAC proteins (ONACs) encoded by the 140 ONAC genes in the rice genome [36], a few ONACs are known to function in leaf senescence (OsNAP [15], ONAC106 [37], OsNAC2/ONAC004 [14], and ONAC011 [38]). To further explore the roles of ONACs in regulating leaf senescence, we investigated the phylogenetic relationships between ONACs and seven Arabidopsis NAC proteins (ANACs) whose regulatory roles in leaf senescence have been determined (Figure S1). This phylogenetic analysis revealed that six ONACs, ONAC022 (Os03g04070), ONAC063 (Os08g33910), ONAC066 (Os03g56580), ONAC095 (Os06g51070), ONAC096 (Os07g04560), and ONAC140 (Os12g43530), were closely clustered with JUNGBRUNNEN1 (JUB1).
According to the public expression data from GENEVESTIGATOR (https://genevestigator.com/gv/) and RiceXPro (http://ricexpro.dna.affrc.go.jp/), while the expression of ONAC063 drops sharply at the reproductive stage, ONAC022, ONAC066, ONAC095, ONAC096, and ONAC140 expression gradually increases during natural senescence in the field (Figure S2). Among the six ONAC candidates, we examined the potential roles of ONAC096 in the onset and progression of leaf senescence in detail. ONAC096 comprises 1904 nucleotides, with a 1032 bp open reading frame encoding a protein made of 343 amino acids. Amino acid sequence alignments between ONAC096 and its putative orthologs indicated that the NO APICAL MERISTEM (NAM) domain was highly conserved among diverse plant species (Figure S3).

2.2. ONAC096 is Upregulated During Leaf Senescence

To investigate whether senescence affected the expression of ONAC096, we monitored the changes in ONAC096 transcript levels in the flag leaves of wild-type (WT; japonica cultivar ‘Dongjin’) plants grown under natural long-day conditions (≥14 h light per day) in the field (37°N latitude, Suwon, South Korea) via reverse-transcription quantitative PCR (RT-qPCR). ONAC096 was sharply upregulated in flag leaves at 144 days after seeding (DAS) (Figure 1a) and in detached leaves during dark-induced senescence (DIS) (Figure 1b).
Higher ONAC096 transcript levels were detected in the tip (T) region than in the middle (M) and bottom (B) regions of senescing flag leaves (Figure 1c). We examined the spatial expression patterns of ONAC096 in rice organs at the tillering and heading stages. These detached rice organs included the tiller base at the tillering stage (88 DAS) and the leaf blade, leaf sheath, root, culm, and panicle at the heading stage (130 DAS) (Figure 1d). RT-qPCR analysis demonstrated that ONAC096 was preferentially expressed in tissues of the leaf blade, leaf sheath, and tiller base, suggesting that ONAC096 might regulate leaf senescence and tillering in rice.

To determine the biological functions of ONAC096 in leaf senescence, we obtained two T-DNA insertion mutants (PFG_1B-02928: onac096-1 and PFG_3A-08770: onac096-2) from the RiceGE database (http://signal.salk.edu/cgi-bin/RiceGE), in which a T-DNA fragment was independently integrated into intron 1 (onac096-1) or intron 2 (onac096-2) of ONAC096. To determine whether these two mutant lines were knockout or knockdown mutants, we compared the transcript levels of ONAC096 in the leaves of 2-month-old WT, onac096-1, and onac096-2 (hereafter, onac096 mutants) plants. RT-qPCR analysis showed that ONAC096 transcript levels were significantly reduced in the onac096 mutants compared to the WT, indicating that both lines were knockdown mutants (Figure S4).
There was no obvious phenotypic difference in leaf greenness between the WT and onac096-1 until the heading stage (Figure 2a). However, at 48 days after heading (DAH), onac096-1 showed delayed leaf yellowing compared to the WT (Figure 2b,c). Consistent with the persistence of leaf greenness, the SPAD value, a parameter measuring leaf greenness, indicated that there were higher levels of green pigments in the flag leaves of onac096-1 after 32 DAH versus the WT (Figure 2d).
We then examined the levels of photosynthetic proteins by immunoblotting with antibodies against photosystem II (PSII) proteins (antenna: Lhcb1 and core: PsbD) and photosystem I (PSI) proteins (antenna: Lhca1 and core: PsaA) in the flag leaves of WT and onac096-1 at 48 DAH, revealing that more photosynthetic proteins remained in onac096-1 (Figure 2e). We measured the Fv/Fm ratio (efficiency of PSII) in the flag leaves of the WT and onac096-1 after heading. Compared to the WT, onac096-1 maintained higher photosynthetic activity 40 DAH (Figure 2f). The retained leaf greenness of rice onac096 mutants improved photosynthetic capacity during grain filling, indicating it is a functional stay-green mutant [39].
To identify whether leaf yellowing was delayed in the onac096 mutants during dark-induced senescence, we detached the leaves of 3-week-old WT and onac096 plants and floated them on 3 mM 2-(N-morpholino)ethanesulfonic (MES) buffer (pH 5.8) in complete darkness at 28 °C. The mutant leaves retained their green color longer than WT leaves at 4 days of dark incubation (DDI) (Figure 3a), indicating that onac096 leaves had higher total chlorophyll contents than WT leaves (Figure 3b). The levels of photosynthetic proteins (Lhca1, Lhcb1, PsaA, and PsbD) also remained higher in detached leaves of onac096 versus the WT (Figure 3c).
To further confirm the regulatory role of ONAC096 in leaf senescence, we generated two independent transgenic rice lines overexpressing ONAC096 (ONAC096-OX; OX-1 and OX-2) (Figure 3d). The detached leaves of 3-week-old ONAC096-OX plants exhibited accelerated leaf yellowing compared to the WT under dark-induced senescence (Figure 3e). Consistent with this observation, total chlorophyll contents were significantly reduced in ONAC096-OX versus WT leaves at 3 DDI (Figure 3f), indicating that the overexpression of ONAC096 contributed to premature leaf senescence. These findings indicate that ONAC096 promotes the onset and progression of leaf senescence in rice.

2.4. Mutation of ONAC096 Improves Grain Yield by Increasing the Number of Panicles Per Plant

3.1. Effects of ONAC096 on Leaf Senescence and Tillering

Leaf senescence generally occurs in an age-dependent manner and is affected by internal factors such as phytohormones [9,64]. Cytokinin has long been known to inhibit leaf senescence in plants [65,66,67,68]. OsCKX2 is strongly expressed in rice leaves [63] and is upregulated in shoots in response to exogenous cytokinin treatment [69]. Furthermore, downregulating OsCKX2 results in increased endogenous cytokinin levels [70]. Based on the finding that OsCKX2 transcripts strongly accumulate in ONAC096-overexpressing transgenic rice plants (Figure 5f), it is likely that ONAC096 promotes leaf senescence by reducing cytokinin levels via effects on OsCKX2 expression.
In contrast to the role of cytokinin in leaf senescence, ABA accelerates the onset and progress of leaf senescence [24]. In Arabidopsis, the bZIP TFs ABA INSENSITIVE5 (ABI5) and ENHANCED EM LEVEL (EEL) bind to the promoters of NYE1/SGR1 and NYC1 to accelerate chlorophyll degradation [71]. Their rice orthologs, OsABI5 and OsEEL, are induced by leaf senescence [46]. In this study, we determined that ONAC096 was upregulated in response to ABA treatment (Figure 7a) and that OsABI5 and OsEEL transcript levels were significantly lower in onac096 versus WT plants during dark-induced leaf senescence (Figure 7d,e). These findings indicate that ONAC096 mediates ABA-induced leaf senescence by activating ABA signaling (Figure 8).

To measure changes in photosynthetic activity, the middle section of the flag leaf of a plant grown in the paddy field under NLD conditions was adapted in the dark for 10 min. The Fv/Fm ratio was measured using an OS-30p+ instrument (Opti-Science, Hudson, NH, USA). To measure total chlorophyll content, detached leaves of plants grown in a growth chamber for 3 weeks were incubated in complete darkness or 50 μM ABA. Extracts obtained using 80% ice-cold acetone were centrifuged at 10,000× g for 10 min at 10 °C. The absorbance of the supernatants was measured at 647 and 663 nm. Chlorophyll content was calculated as previously described [73]. The change in SPAD value was measured in the flag leaves of plants grown in a paddy field under NLD conditions using a SPAD-502 instrument (Konica Minolta, Tokyo, Japan).

This work was carried out with the support of the Cooperative Research Program for Agricultural Science & Technology Development (PJ013146), Rural Development Administration, South Korea, and Basic Science Research Program through the National Research Foundation (NRF) of Korea funded by the Ministry of Education (NRF-2017R1A2B3003310). 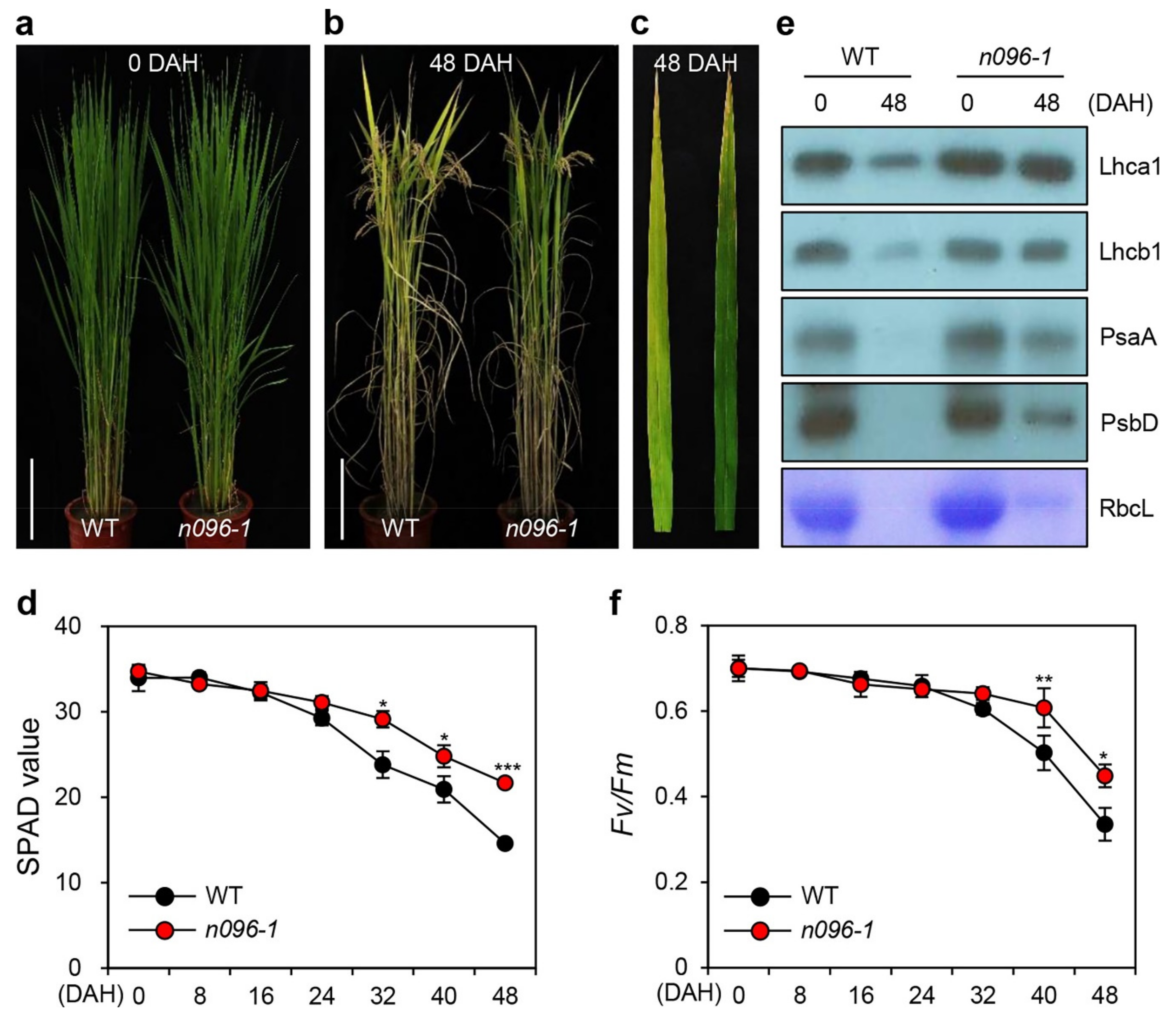 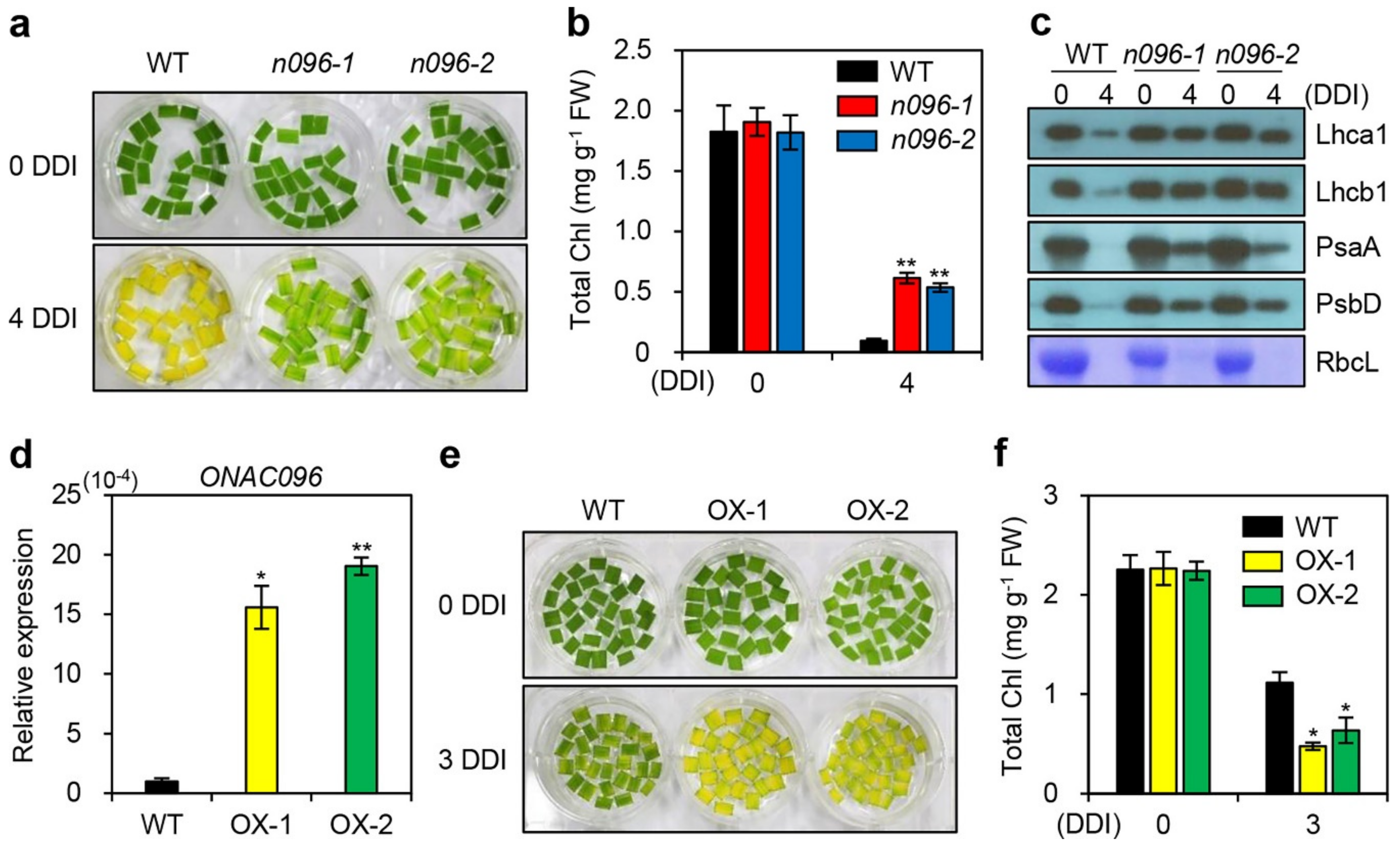 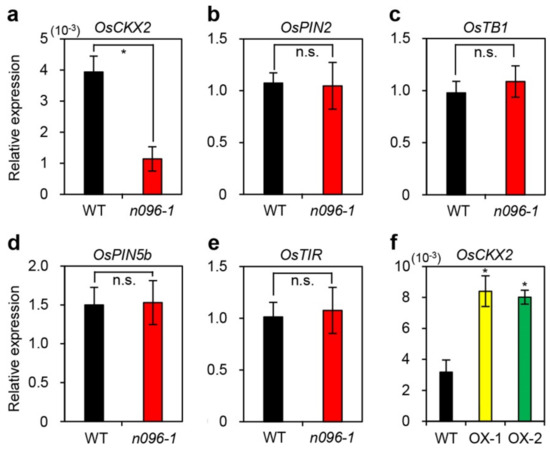 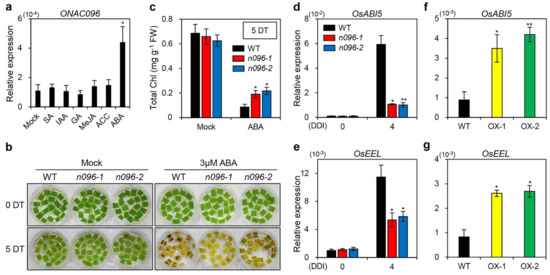