This review focuses on the role of 5′AMP-activated protein kinase (AMPK) in the effects of resveratrol (RSV) and some RSV derivatives on hepatic steatosis. In vitro studies, performed in different hepatic cell models, have demonstrated that RSV is effective in preventing liver TG accumulation by activating AMPK, due to its phosphorylation. These preventive effects have been confirmed in studies conducted in animal models, such as mice and rats, by administering the phenolic compound at the same time as the diet which induces TG accumulation in liver. The literature also includes studies focused on other type of models, such as animals showing alcohol-induced steatosis or even steatosis induced by administering chemical products. In addition to the preventive effects of RSV on hepatic steatosis, other studies have demonstrated that it can alleviate previously developed liver steatosis, thus its role as a therapeutic tool has been proposed. The implication of AMPK in the delipidating effects of RSV in in vivo models has also been demonstrated.
Keywords: resveratrol; AMPK; hepatocyte; liver; steatosis resveratrol; AMPK; hepatocyte; liver; steatosis

The most benign form of non-alcoholic fatty liver disease (NAFLD) is known as simple hepatic steatosis, and it consists of excessive fat accumulation in the liver. This hepatic alteration is considered to be the main contributor to chronic liver disease development in western societies. Moreover, the prevalence of NAFLD is expected to increase with the greater incidence of metabolic syndrome and obesity, which are closely related to hepatic steatosis [1]. Indeed, hepatic steatosis has been proposed as the hepatic manifestation of metabolic syndrome. This health alteration is defined as an intrahepatic triglyceride (TG) accumulation greater than 5% of the liver weight, or by ≥5% of hepatocytes showing TG content [2].
5′AMP-activated protein kinase (AMPK) is a master regulator of energy homeostasis, activated by low cellular energy status [3,4]. It restores energy balance during metabolic stress both at cellular and physiological levels [5]. Under conditions of energy depletion, the activation of AMPK leads to the inhibition of ATP-consuming pathways (e.g., fatty acid synthesis, cholesterol synthesis, and gluconeogenesis), and the stimulation of ATP generating processes (e.g., fatty acid oxidation and glycolysis), thus restoring overall cellular energy homeostasis [6,7,8]. The activation of AMPK is regulated by its heterotrimeric structure, which consists of a catalytic subunit α (α1 and α2), a regulatory and structurally crucial β subunit (β1 and β2), and a regulatory subunit γ (γ1, γ2, and γ3), with unique tissue and species-specific expression profiles [3]. Given its key role in regulating energy balance, AMPK may have therapeutic interest for the treatment of diseases in humans, such as insulin resistance, type 2 diabetes, obesity, NAFLD, cardiovascular diseases, and cancer [3,4,9].
Several molecules have been identified as AMPK activators. Among these molecules, resveratrol (RSV; 3,5,4′-trihydroxy-trans-stilbene) (Figure 1), a non-flavonoid polyphenol, has generated great interest [10]. Numerous studies have been carried out using RSV and different models of obesity and liver steatosis in rodents [2,11]. The vast majority of preclinical studies have demonstrated that RSV is able to prevent liver TG accumulation, although more evidence is still needed with regard to human beings [12,13,14].
As far as RSV-mediated AMPK activation is concerned, the role that is played in this process by sirtuin 1 (SIRT1) must be highlighted. Indeed, in both cases (AMPK and SIRT1), their regulation occurs in response to similar stimuli, namely nutrient availability and energy expenditure [15,16]. In this regard, while SIRT1 activation is enhanced by changes in the NAD+/NADH ratio (Figure 2), the activation of AMPK is mediated by changes in the AMP/ATP ratio [16]. In fact, although it is widely accepted that both molecules regulate the activation of each other [17], no consensus has been reached regarding which is activated first. In this regard, while some authors have reported that SIRT1 activates AMPK through the deacetylation of liver kinase B1 (LKB1, Figure 2) [18,19], other authors have suggested that AMPK activation results in an increased NAD+/NADH ratio, and thus, in greater SIRT1 activation [16,20]. In a study that was carried out in brains from Alzheimer’s disease patients, the authors observed that RSV increased cytosolic Ca2+ levels and so increased AMPK activation via calcium/calmodulin-dependent protein kinase kinase-β (CaMKKβ, Figure 2) [21]. In line with this study, Park et al. analyzed the metabolic diseases that are associated with aging, reporting that RSV increased cyclic adenosine monophosphate (cAMP) through phosphodiesterase (PDE) inhibition, without activating adenylyl cyclase activity directly. In fact, PDE inhibition prevented diet-induced obesity by the CaMKKβ/AMPK/SIRT1 pathway (Figure 2) [22].
This review focuses on the role of AMPK in the effects of RSV and some RSV derivatives on hepatic steatosis (Figure 2). For this purpose, in vitro and in vivo studies have been included.

This study was supported by grants from the Instituto de Salud Carlos III (CIBERObn), Government of the Basque Country (IT-572-13).

The authors acknowledge Esperanza Irles for her collaboration. 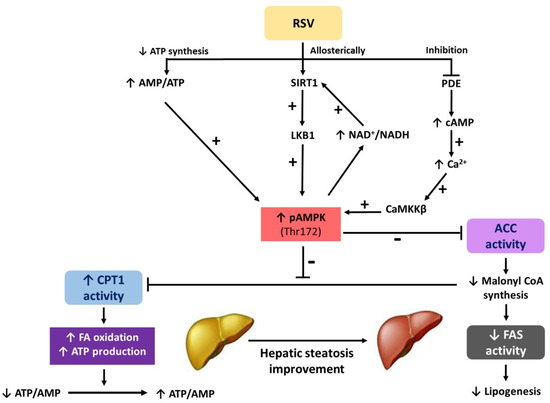