The Mediterranean diet (MD) is known to be one of the healthiest dietary habits [1]. Recently, the concept of dietary “pattern” has emerged as an alternative approach to examining the relationship between diet and the risk of developing chronic diseases [1]. Instead of looking at individual nutrients or foods, diet pattern analysis examines the effects of overall diet as a cluster outlook. From a speculative point of view, dietary patterns correspond to a broader concept of food and nutrient consumption and may thus be more predictive than individual foods or nutrients in establishing MD adherence and the impact on health. In fact, the beneficial effect of the MD is due to the synergic and interactive combinations of nutrients, rather than to isolated nutrients. Moreover, to evaluate the role of MD in wellness, the analysis of single nutrients may be insufficient to establish network information amongst foods and the effect of a single nutrient too little to be identified, hence requiring the evaluation of the cumulative effects of various nutrients in the context of dietary patterns [2].
Mediterranean dietary patterns (MDPs) are characterized by the consumption of cereals (preferably as whole grains), legumes, nuts, vegetables and fruits, in high amount and frequency; MDPs also include reduced consumption of fish or seafood, white meat and eggs, moderate to small amounts of poultry and dairy products and low ethanol intake, usually in the form of wine. The principal source of dietary lipids of MDPs is olive oil, and an adequate daily intake of water should be guaranteed [3]. In addition, MDPs also include the practicing of physical activity in order to maintain a healthy physical and mental status [4] (Figure 1). On the contrary, the “Western” diet, diffused in industrialized countries, presents a higher intake of animal-derived foods (saturated fats), eggs, sweets, desserts and a lower eating of fruits, vegetables (fibers and micronutrients) and whole cereals [5]. Furthermore, in the MD, the consumption of traditional and local food products is a strength, respecting the seasonal availability and the biodiversity of food.
Many of the characteristic components of the MD have functional features, with positive effects on health and well-being; these may be responsible for the advantages associated with this diet [6]. Vegetables, fruits and nuts are the most important source of fibers and chemical compounds, like flavonoids, phytosterols, vitamins, terpenes and phenols, which give protection against oxidative processes, hence reducing the incidence of cardiovascular diseases (CVD) [6,7,8,9]. Furthermore, the consumption of olive oil, as the predominant fat intake, provides high oleic acid content and polyphenols, which have atherogenic, antioxidant and anti-inflammatory effects, reducing the cholesterol/high density lipoprotein (HDL) ratio and the concentration of the oxidized low density lipoprotein (LDL) [10,11,12]. Furthermore, olive oil has high levels of monounsaturated fatty acids (MUFAs) and a higher MUFA/saturated FAs (SFAs) ratio, which contribute to the protective effects [13,14]. Polyunsaturated FAs (PUFAs), contained in fish (i.e., eicosapentaenoic and docosahexaenoic acids), regulate hemostatic factors and provide protection against cardiac arrhythmias, cancer and hypertension and play a role in the preservation of cognitive functions [6,15,16]. Typically, MDPs include low-glycemic index and low-glycemic load foods, derived from the whole grain and other fiber-rich product intake, which have been associated with a lower risk of diabetes, mainly type 2, coronary health diseases (CHD) and cancer, while refined grain has been linked to the risk of diabetes, obesity, CHD and other chronic diseases [17,18]. The water-rich dairy products characteristic of the MD, such as yoghurt and cheese, are well tolerated by lactose-intolerant subjects. In addition, lactic acid bacteria, contained in the yoghurt, improve gastrointestinal (GI) health and immune response, displaying probiotic benefits [6]. Moreover, the consumption of yoghurt may induce positive modifications in the gut microbiota, which have been associated with a reduction of colon cancer risk indices [19]. 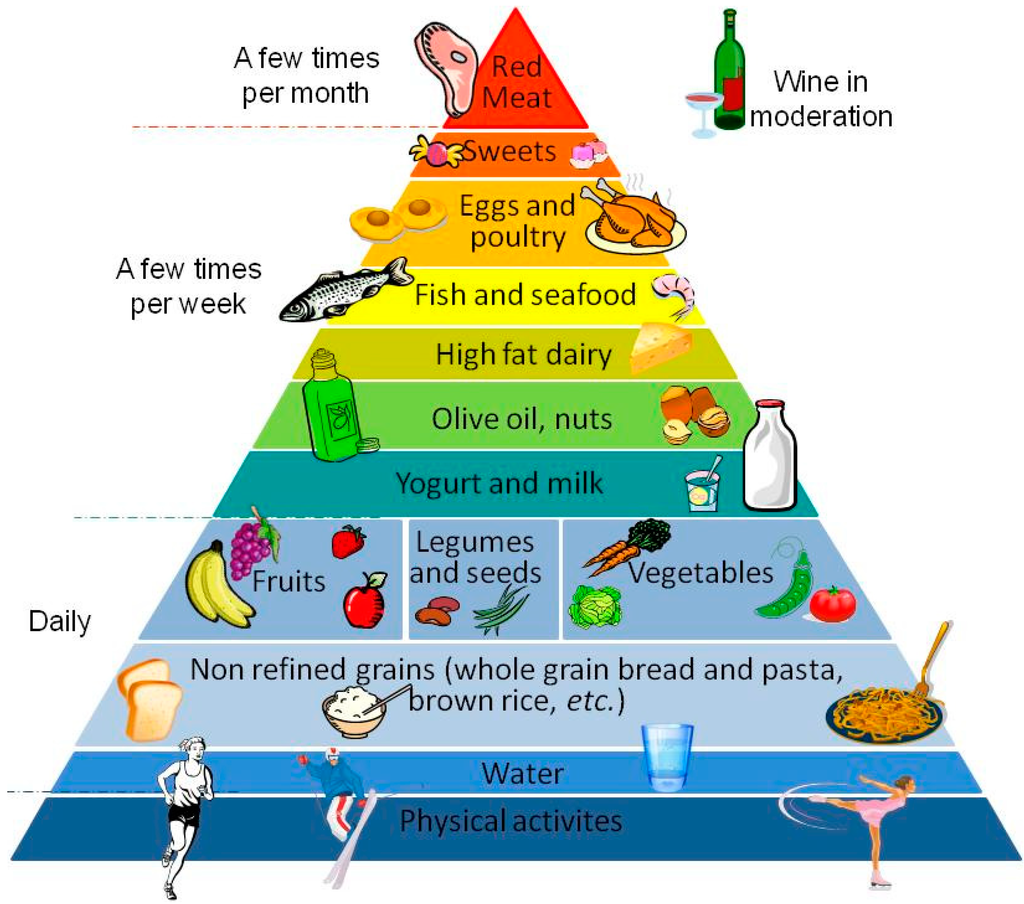 Another important aspect in the MD, frequently ignored, is the low sodium intake; in fact, high sodium intake has been linked with high blood pressure, while consumption of salt-preserved foods has been connected with higher risk of stomach cancer, CHD and mortality [20]. Some of the beneficial effects of the MD in human diseases have been attributed to the polyphenols contained in red wine. Indeed, the antioxidant activity of these compounds may also be responsible for cytoprotective and cardioprotective action [21]. Particularly, MD adherence can be computed through various computational scores (e.g., the MD score for adults, the Mediterranean Diet Quality Index (KIDMED) for children [14] and Trichopoulou’s scale [22]), which are all based on dietary component quantities and types. For this purpose, questionnaires, including information on average consumption (never or rarely, times per month, week or day, as appropriate) of food items or beverages are administered. Portions can be estimated by “natural” units (e.g., one egg) or standard quantities (e.g., one teaspoon) and, when possible, supported by pictures of several foods and dishes, each representing a different portion, all taken under usual conditions. In addition, questionnaires include data on alcoholic beverage consumption for wine, beer, spirits and other drinks. For example, in Trichopoulou’s scale, a value of one and zero is assigned to each beneficial component (e.g., vegetable, legumes, fruits and nuts, cereal and fish) in the case of consumption or no-consumption, respectively. The inversion of the value is assigned to the so-called “detrimental” components (e.g., meat, poultry and dairy foods) and alcohol intake [22]. Based on the given answers, the test classifies the quality of the MD categorized as minimal, medium or maximal. However, the difficulty of the associations between dietary intake and disease cannot be ascribed to a single nutrient, but, rather, to multiple nutrients and foods. MDPs become then key parameters to explore the connections between nutrition and disease [23]. The new era of omics technologies are opening novel avenues to “nutrigenomics”, a field of genomics studying the effect of a specific food or diet on gene and expression profiles, leading to an advanced understanding of specific mechanisms between diet and host metabolism modulation [24]. MDPs and omics technologies may jointly provide an advanced original approach in nutraceuticals, merging eating behavior to systems medicine to identify benefits against chronic diseases.

The high adherence to MD, as evidenced by studies on different groups of individuals, lead to a reduction of mortality and the incidence of major chronic diseases [23,25], such as cancer [26,27,28], metabolic and cardiovascular syndrome [29], neurodegenerative diseases [30], type 2 diabetes [31,32], fatty liver diseases [33] and allergy [34]. Moreover, MD is highly associated with an improved quality of life, which is translated into better psycho/physiological and metabolic profiles [35,36] (Figure 2). In recent years, dietary improvement has been related to a worldwide decrease of the gastric cancer rate [37]. For instance, in South Italy and in other countries of the Mediterranean basin (e.g., France and Greece), where the MD is widely diffused, compared to North Italy, the cancer mortality risk is generally lower than in other geographical regions, even if the full reasons for these decreases have not been completely unveiled [38].
Based on different studies, some MD components show reducing effects on gastric cancer occurrence [39,40,41]. Indeed, as reported by the second World Cancer Research Fund (WCRF) and American Institute for Cancer Research WCRF report (2007), non-starchy and allium vegetables, fruit and legumes probably protect against stomach cancer [40,42]. Olive oil and other vegetable fats, containing PUFAs, are reported to be inversely correlated to upper digestive, stomach and urinary tract cancer development risk [37]. On the contrary, low consumption of fruit and vegetables and a high intake of red meat, salty and smoked foods, grilled or barbecued meat increase the risk of gastric cancer development [39,40,41], while, fish, dairy products and alcohol consumption are less correlated with it [43,44]. 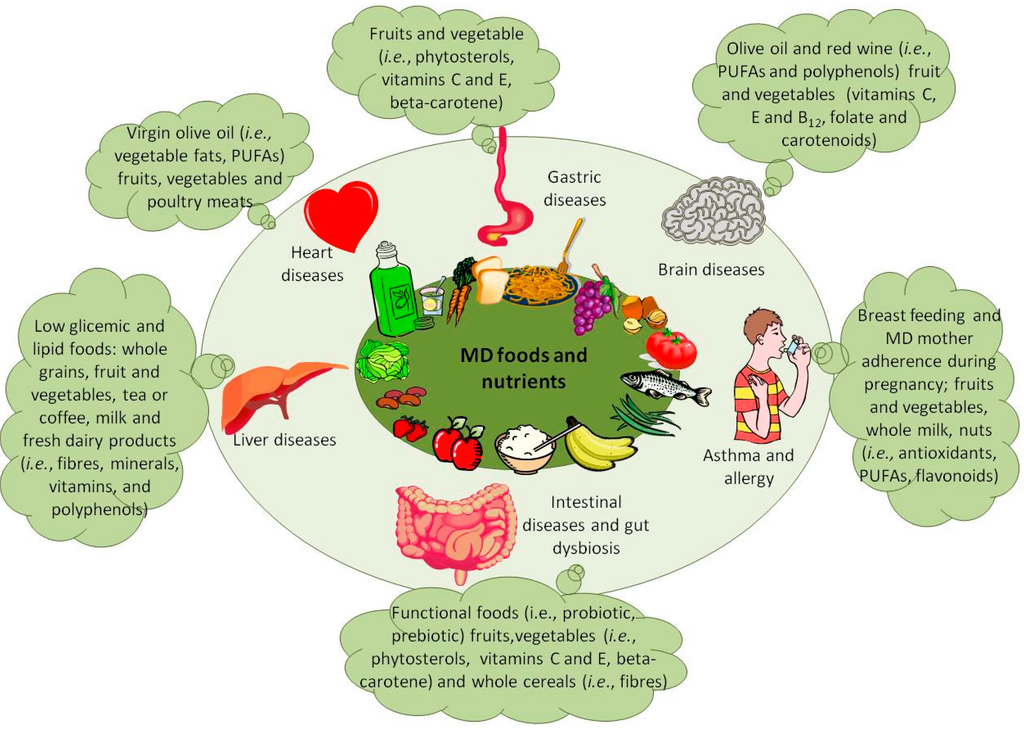 The MD’s healthy impact on childhood health and disease prevention is only presumed on the basis of the current opinion and little scientific evidence. Currently, only the NU-AGE project (“New dietary strategies addressing the specific needs of elderly population for an healthy aging in Europe”), by the use of omics techniques, has the goal of linking the dietary effect to cellular inflammation in the elderly [148]. Up to now, literature concerning the MD’s role during childhood is still lacking. For this reason, our proposal is to conceive of a dedicated conceptual framework and a systems biology-based project design to evaluate the MD’s effect on gut microbiota, by recruiting healthy young individuals grouped into three age stages: (i) 6–11 years, childhood; (ii) 12–16 years, puberty; and (iii) 17–21 years, adolescence.
Trichopoulou’s scale (0–9 MFP scores) will be used to quantify MD adhesion. The gut microbiota-MD relationship will be investigated by metagenomics, metabolomics and metaproteomics on fecal samples. Based on computed scores, individuals will be categorized into MDP-related subsets, and “nutrimetabolomics” tools will describe food metabolism products for the entire group of enrolled individuals. Gut metabolism outlines will be associated with age range subsets in order to infer direct effects on the host’s health (e.g., food metabolism) during growth until adulthood. Then, the meta-omics maps will be integrated in order to describe the relationship between metabotypes and “enterotypes” in an age-dependent manner, by stratifying individual MDPs (Figure 3). 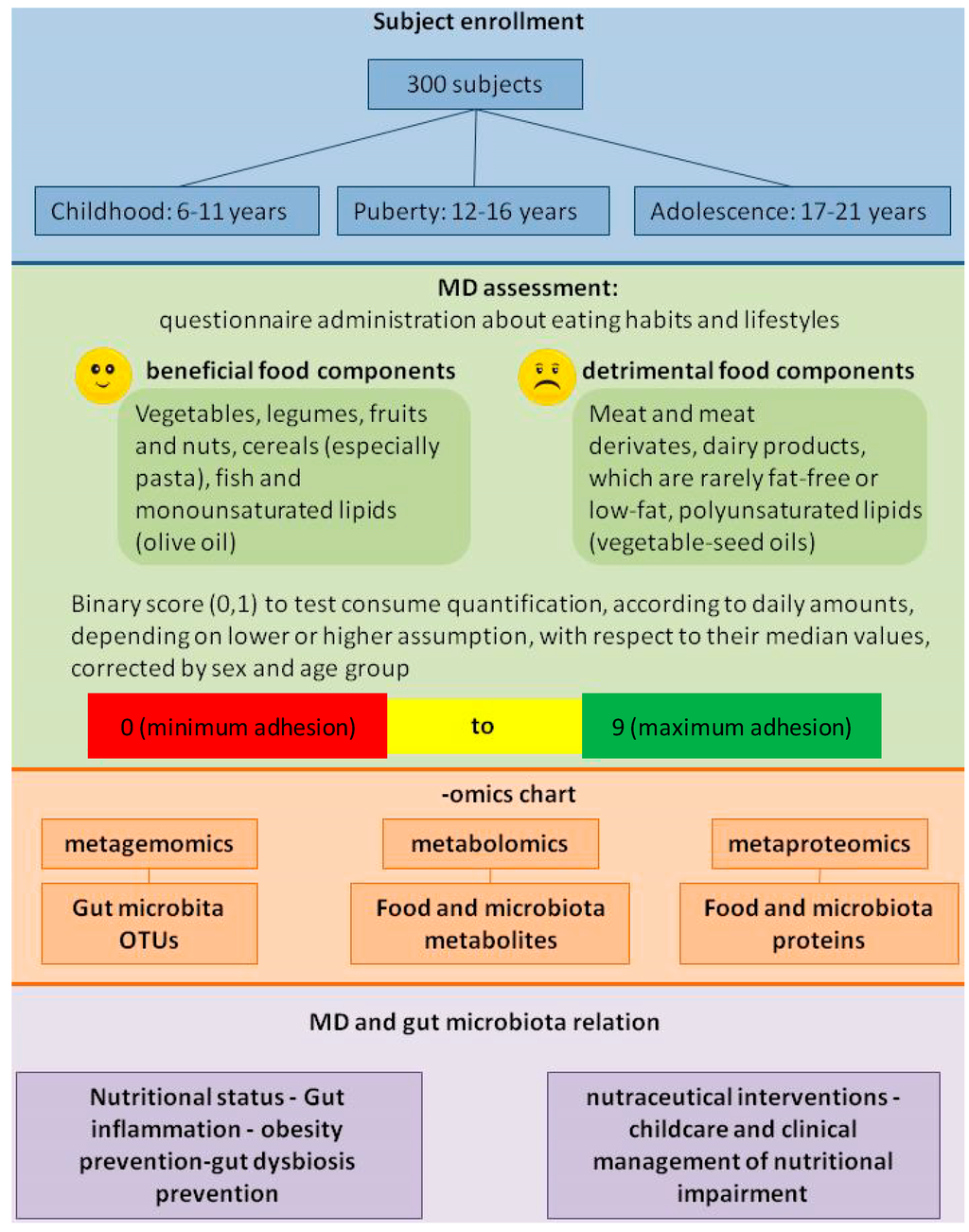 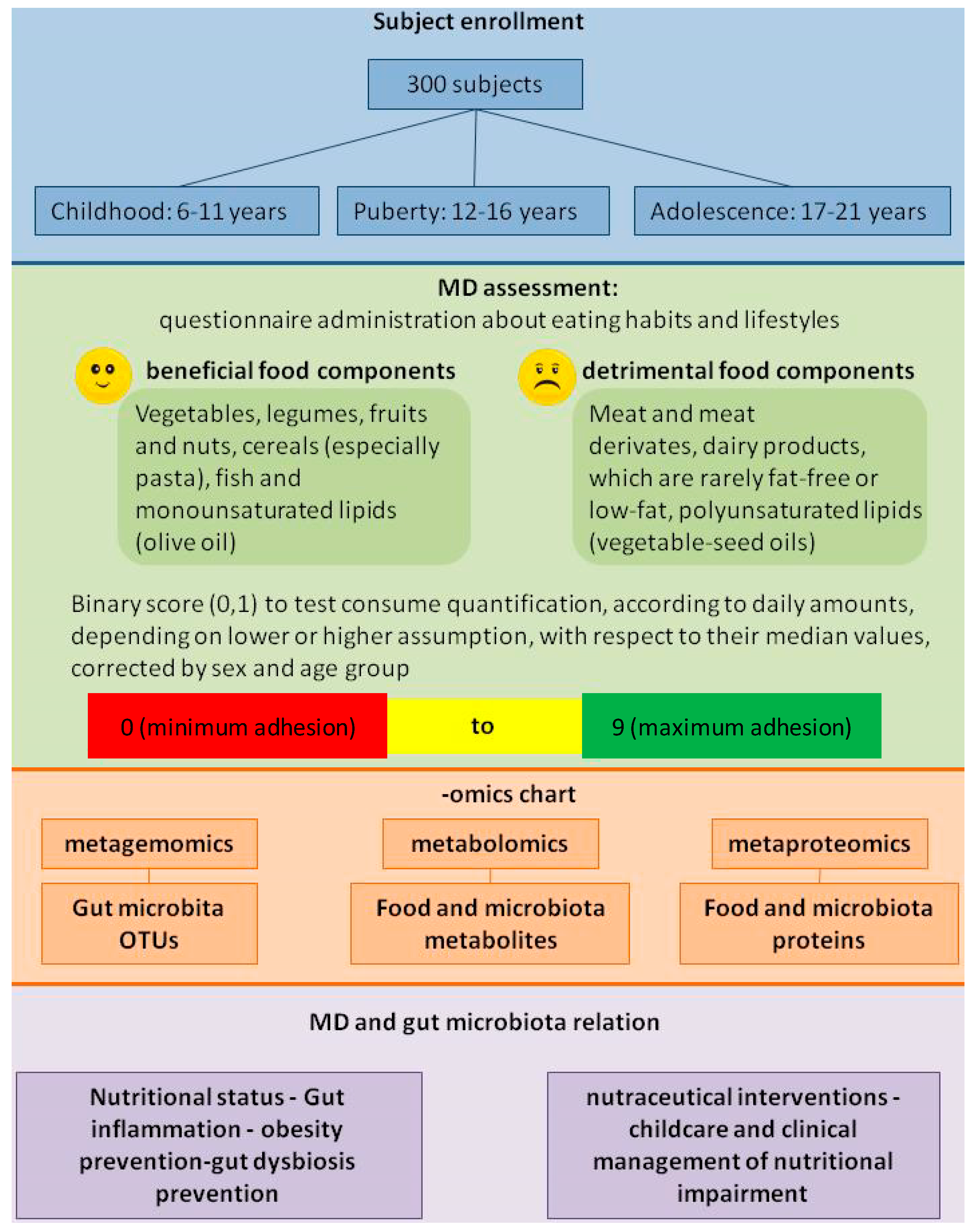 Within this scenario, the assessment of a scientific proof of evidence, on the correlation between MD adherence and food-derived metabotypes and “enterotypes”, could allow one to develop targeted diets, nutraceutical interventions and improve the childcare and clinical management of people with nutritional impairment, from childhood. Hence, the description of MDPs and related alterations of gut microbiota profiling will be used to prevent, by the most innovative translational approaches of systems medicine, food-related diseases (e.g., obesity, metabolic syndrome, diabetes, etc.), whose onset has been significantly shifted to early in life. The next challenge resides in the new “vision” of the gut microbiota considered as a multifunctional “organ” constantly subjected to food-driven perturbation.