Use of Peroxyacetic Acid as Green Chemical on Yield and Sensorial Quality in Watercress (Nasturtium officinale R. Br.) Under Soilless Culture
Previous Article in Special Issue

The conversion of testosterone (T) in 5α-dihydrotestosterone (DHT) mediated by 5α-reductase type II enzyme is an essential process for the normal sexual differentiation of male external genitalia during fetal life [1].
The decrease in the DHT synthesis due to mutations in the 5α-reductase type II gene (SRD5A2) results in a disorder of sex development (DSD) in individuals with 46,XY karyotype [2–4]. DHT is the most potent androgen responsible for virilization of the external genitalia in embryonic life as well as for prostate differentiation and virilization at puberty. At birth, 46,XY affected individuals may exhibit genital ambiguity or female genitalia but, generally, normal internal reproductive structures [5–8]. In some cases, affected individuals are reared as females that will present spontaneous virilization at puberty [9].
The SRD5A2 gene is located at 2p23 and comprises five exons separated by four introns occupying approximately 60 kb of genomic DNA. The coding sequence is translated into a polypeptide of 254 amino acids. The protein presents a testosterone binding domain and also a NADPH cofactor-binding domain in the N-terminal region. Mutations that affect the testosterone binding region are located in either exon 1 or 5, while mutations affecting the NADPH binding are more numerous and generally map within exon 3 and 4 [10,11].
In the present study, we have identified the p.Gln126Arg homozygous mutation in exon 2 of SRD5A2 gene in two 46,XY affected siblings raised as females. The SRD5A2 molecular diagnosis was important in this family to ensure an early identification of the enzymatic deficiency in a younger sib and to offer further appropriate medical and psychological support.

After studying and analyzing the SRD5A2 gene in case 1, the clinical suspicion of 5α-reductase type II deficiency was confirmed. The patient was informed about her diagnosis and about the possibility of gender reassignment. She was asked to bring her 10-year-old sister, who had not been diagnosed yet, to be evaluated.
All five SRD5A2 exons were amplified by PCR for both patients. The molecular analysis revealed that both sisters were homozygous for p.Gln126Arg missense mutation. The mutation resulted from the CAA > CGA nucleotide substitution in the exon 2 (Figure 1). It is considered to completely inactivate the enzyme causing a drastic decrease in its half-life when transfected into mammalian cells in vitro [10,12]. This mutation had been previously described in Brazilian, Portuguese, French, Spanish, German, Belgium and North American patients and, in all cases, it was associated to severe phenotype of SRD5A2 deficiency [1,8–10,13–18]. Hackel et al. [8] described the compound heterozygosity for this mutation in four Brazilians patients.
Figure 1(C) shows that Q126 residue is conserved in humans for both SRD5A1 and SRD5A2 isoforms and also for proteins of several vertebrate animal orthologs. Therefore it is located in a very conserved region of the protein suggesting that this residue is very important for enzymatic structure and activity.
The biological importance of p.Gln126Arg change upon the structure of the enzyme was investigated by modeling the mutant enzyme and comparing it to its native form. Because the crystallographic structure of SRD5A2 is not resolved yet we used Blast algorithm to search for a similar structure to be used in modeling analysis [19]. Around 30% similarity is usually required between sequences to obtain a reliable structural model [20], therefore the human liver 5β-reductase (AKR1D1) (PDB ID: 3G1R-chain A) that presented a similarity of 28.9% was chosen, since there was no other crystalographically resolved protein with higher similarity. The AKR1D1 is a human steroid 5β-reductase and belongs to the aldo/keto reductase family [21]. It is involved in the bile acid biosynthesis and also participates in the initial step of steroid hormone metabolism. In humans, steroid 5β-reductases (SRD5A1, SRD5A2) and steroid 5β-reductase (AKR1D1) act to yield the corresponding 5α- or 5β-dihydrosteroids, respectively [1,22]. The modeled structure indicated that p.Gln126Arg is located within an internal region of the protein near the NADPH-binding region (Figure 2(A)). The NADPH-binding domain in SRD5A2 comprises residues R145, R171, P181, G183, N193, G196 and R246 [10]. Observing the structural model, those amino acids are organized as a pocket to receive NADPH (Figure 2(A)). Different interactions were shown for either Q126 native residue or R126 mutant residues when comparing internal contacts (Figures 2(B–E)). Hydrogen bond interactions with Q182 (main chain–side chain) and with both I131 and L130 (main chain–main chain) were maintained in both native and mutant proteins, whereas the aromatic interaction with Y132 was abolished and two different interactions with N122 (one hydrophobic and other hydrogen bond main chain–side chain) were established in the mutant. In addition, the R126 mutant residue demonstrated three different internal interactions: an aromatic stacking with Y129 and two hydrophobic interactions with A134 and C133. Either native or mutant 126 residue in SRD5A2 protein are linked through a hydrogen bond to Q182 residue which is located within the NADPH-binding site region. However, the new hydrogen bond interaction between A134 and R126 mutant residue might affect the structure of NADPH-binding domain by disrupting the native interaction between A134 and Q182 residues (Figures 2(F,G)) and creating novel hydrophobic interaction between Q182 and I180 residues (Figures 2(H,I)).
Those results indicate that p.Gln126Arg mutation probably modify or abolish 5α-reductase type II enzyme activity by preventing NADPH binding.

A 17-year-old patient (case 1), reared as a girl, was referred to us to investigate virilization by the time of puberty. She was born at term after an uneventful pregnancy and normal delivery. She was the first child of consanguineous parents (first cousins); there were 3 paternal and 2 maternal half sibs, 2 sisters and a brother. According to the patient, an ultrasound of her 10-year-old sister (case 2) revealed absence of uterus, therefore she was also suspected to have sex ambiguity (Figure 3).
On physical examination, her weight was 55 kg and height 175 cm. She exhibited an 8-cm phallus with chordee; a single perineal opening; no vaginal introitus; labioscrotal folds were fused, pigmented and enrugated; and 10 cm3 testis were both palpable—the right was in the inguinal region and the left in the labioscrotal fold. Additionally, she had a male distribution of pubic hair, facial hair was absent and there was no breast development. She demonstrated a male gender behavior and considered herself as homosexual.
The patient karyotype was 46,XY. Upon pelvic ultrasound, uterus was absent and prostate was also not detected. Hormonal evaluation showed elevated FSH (16 IU/L; normal male range (NR) 1.5–12.4), slightly elevated LH (8.7 IU/L; NR 1.7–8.6) and normal total testosterone (13.6 ng/mL; NR 8.8–27.0), and free testosterone (5 pg/mL; NR 2.8–8.1) levels, with low dihydrotestosterone level (0.3 ng/mL; NR 0.5–2.9), and high testosterone/dihydrotestosterone ratio (45.3; NR < 10). After 15 months of follow-up with psychological support, the patient requested sex reassignment to male.
The patient’s sister (case 2) was 11 years old when first examined by us. On physical examination, her weight was 32.3 kg and height 143.6 cm. She exhibited a 2.5-cm phallus with chordee, a single perineal opening and no vaginal introitus. Labioscrotal folds were not enrugated or pigmented, and her gonads were not palpable; there were no signs of pubertal development. Her karyotype was 46,XY, and hormonal evaluation revealed prepubertal levels of FSH, LH and testosterone.
When she was 12.5 years old, her phallus measured 4 cm and pubic hair was on Tanner stage 2. A few months later, hormonal evaluation revealed pubertal levels of FSH (7.75 IU/L), LH (5.3 IU/L), and total (9.6 ng/mL) and free testosterone (5.85 pg/mL), low dihydrotestosterone level (0.2 ng/mL), and high testosterone/dihydrotestosterone ratio (48.0). The gonads were not seen upon pelvic ultrasound. When she was last seen by us, at 13.5 years, her phallus measured 5 cm and pubic hair was on Tanner stage 3.
As soon as the diagnosis of 5-alpha-reductase type 2 deficiency was confirmed, a careful approach was conducted to explain her condition, which was favored by her knowledge about what was going on with her older sister. Since then, she has been followed by a specialized psychologist who has evaluated her periodically for her understanding and adapting to male gender. At the beginning, she revealed interest in situations which are socially viewed as male activities, such as playing soccer with boys and watching action movies, and using clothes which were not typically female, although, at first, she did not see herself as a male. At the present, she exhibits overtly male behavior.

The present molecular investigation collaborated in guiding the diagnosis of deficiency in 5α-reductase type II in a family. The molecular analysis provided additional support for the psychosocial male orientation for both female affected siblings that, in the case of the older sister, had been defined even before the diagnosis. Therefore, the identification SRD5A2 gene mutations contributed in confirming the diagnosis and provided an early diagnosis of a non-symptomatic affected member in the family. Additionally, the structural analysis of the mutated protein demonstrated to be a useful and inexpensive tool to evaluate the deleterious role of a mutation as a cause of the deficiency of 5α-reductase type II enzyme. 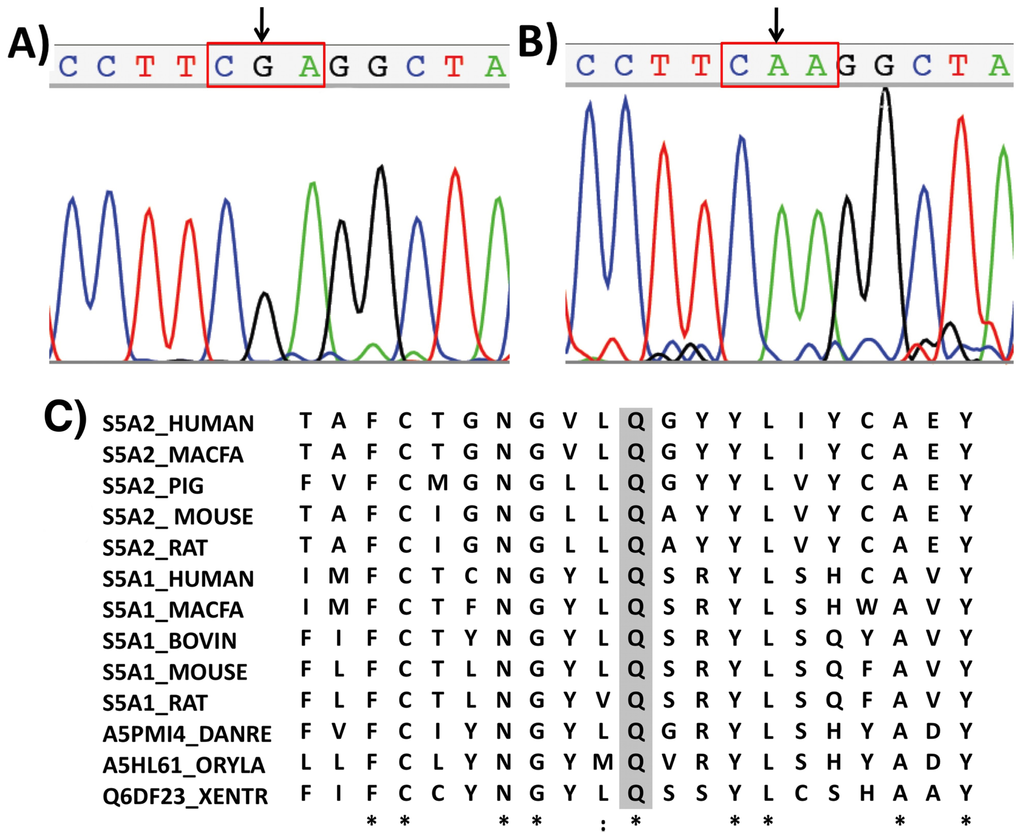 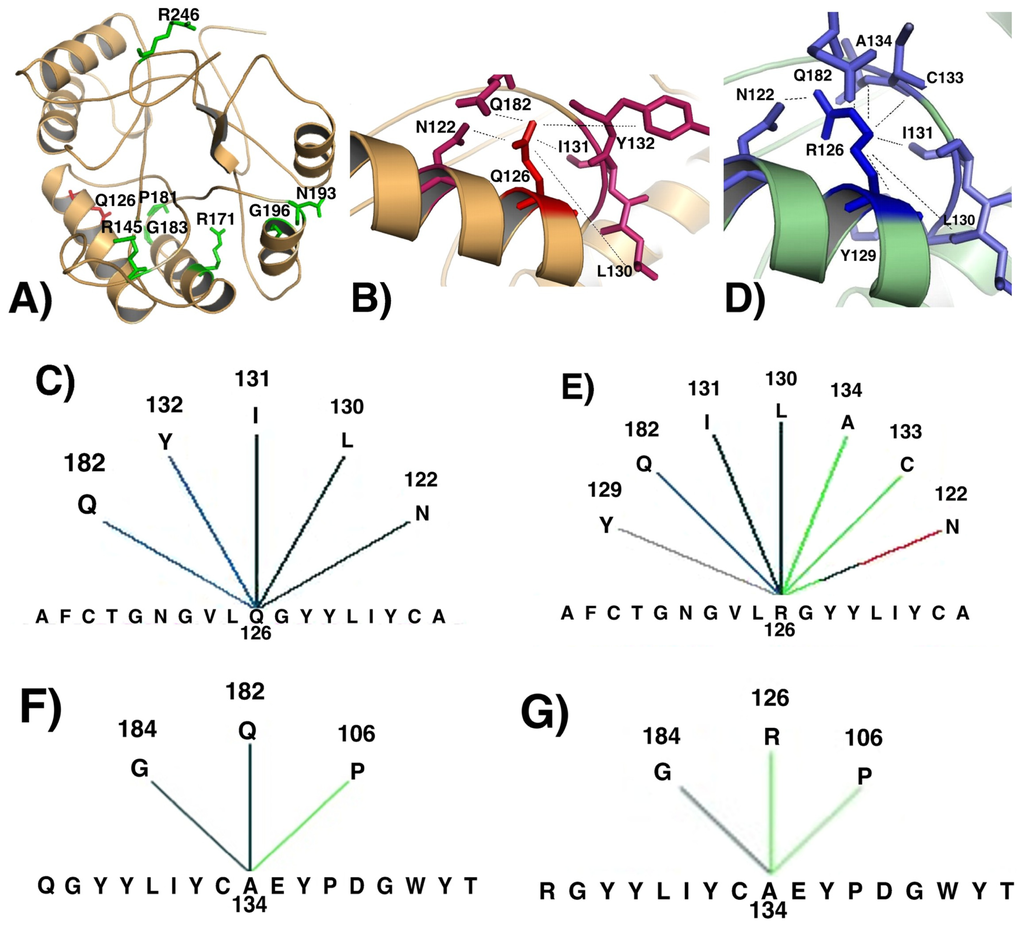