2.2. Quantification of Ginsenosides in the Ginseng Fraction Extracts

The concentrations of ginsenosides in different ginseng fraction extracts were quantified through HPLC. The contents of 19 individual ginsenosides and the total ginsenosides are listed in Table 1. TGE and HPG contain the same compounds, and ginsenosides Re and Rd were the two major compounds in both extracts, while HPG had a much higher concentration of ginsenosides compared to TGE. The total content of ginsenosides in HPG (360.00 ± 3.17 mg/g) increased 2.4 times after removing non-ginsenoside components from TGE (105.39 ± 11.96 mg/g) through liquid-liquid extraction. In the LPG extract, the common high-polar ginsenosides such as Rb1, Rg1, Re, and Rc were not detected. The majority of the components were less-polar ginsenosides; its contents reached 424.85 ± 2.60 mg/g. Ginsenoside Rg3 (20S/R Rg3), which is regarded as the unique active compound in ginseng products [21,22], was enriched and accounted for 27.6% in the LPG extract.

2.3. The Effect of Different Ginseng Fraction Extracts on Cell Viability

To evaluate the cytotoxic effect of fractioned ginseng extracts on THP-1 cells, an MTT assay was carried out; dose-response curves are shown in Figure 2. The horizontal axis is concentrations of tested extract, and the vertical axis is the survival rate of cells treated with different concentrations of tested extract for 48 h or 72 h. There was no obvious toxic effect of TGE and NGE on cell growth below 1000 µg/mL. At low concentrations, there was no obvious effect on cell growth, but when concentrations increased to some extent, HPG and LPG showed a dose-dependent response and decreased cell growth as concentrations increased. A best-fit curve (four parameter curve) was drawn. The LC50 (lethal concentration 50%) values were determined by plotting cell viabilities against concentrations. The LC50 of HPG for 48 h and 72 h is 1994 µg/mL (R2 = 0.9680) and 1396 µg/mL (R2 = 0.9439), respectively, while the LC50 of LPG for 48 h and 72 h is 713.1 µg/mL (R2 = 0.9833) and 620.4 µg/mL (R2 = 0.9405), respectively. The results show that the toxicity to THP-1 cells increased when high-polar ginsenosides converted to less-polar ginsenosides. Cells seemed more sensitive to the less-polar ginsenosides. Additionally, Figure 2 shows that the concentrations below 250 µg/mL of LPG and HPG, and the dose under 1000 µg/mL of TGE and NGE were not toxic to THP-1 cells treated for 48 h. Thus, advisable concentrations (1, 10, and 100 µg/mL for HPG and LPG; 10, and 100 µg/mL for NGE; 40, and 400 µg/mL for TGE) were used in the further assay.

2.4. The Effect of Different Ginseng Fraction Extracts on Cell Viability

Based on the concentration of ginsenosides in the TGE and MTT assay, 40 and 400 µg/mL TGE were used to evaluate the effect of total ginseng extract on cytokine production. TGE significantly inhibited LPS-stimulated TNF-α production from 1600 ± 38 pg/mL to 1180 ± 31 pg/mL at a concentration of 40 µg/mL, and to 978 ± 14 pg/mL at a concentration of 400 µg/mL, respectively. There was an inhibited trend for IL-1β and IL-6 production in TGE treatment groups compared to control groups, but no statistical significance except for IL-6 secretion treated with 400 µg/mL of TGE. There was no significant difference in other cytokine productions whether it was treated with TGE or not (Figure 3).

Ginsenosides are commonly regarded as the active ingredient of ginseng. High-polar ginsenoside fraction extracts (HPG) and less-polar ginsenoside fraction extracts (LPG) were separated from a total ginseng extract. To evaluate the effect of HPG and LPG on cytokine production, THP-1 cells were treated with various concentrations of HPG and LPG for 2 h, followed by LPS (200 ng/mL) incubation. 24 h after LPS treatment, cytokines including TNF-α, IL-1β, IL-6, IL-8, IL-10, and TGF-β1 in the culture medium were determined. Results are shown in Figure 5. Five cytokines (TNF-α, IL-1β, IL-6, IL-8, and IL-10) were almost undetectable in the culture medium without PLS treatment, but their levels increased dramatically after LPS stimulation. A high dose (100 µg/mL) rather than a low dose (10 or 1 µg/mL) of HPG significantly inhibited LPS-induced TNF-α, IL-1β, and IL-6 productions. LPG showed a dose-dependent inhibitory effect on LPS-induced TNF-α, IL-1β, and IL-6 productions. 100 µg/mL LPG significantly decreased LPS-stimulated TNF-α from 1600 ± 38 pg/mL to 275 ± 41 pg/mL, IL-1β from 571 ± 50 pg/mL to 188 ± 12 pg/mL, and IL-6 from 14.1 ± 1.3 pg/mL to 2.1 ± 0.1 pg/mL, respectively (Figure 5A–C). Both HPG and LPG did not show significant effects on LPS-induced IL-8 and TGF-β1 productions at different concentrations from 1 µg/mL to 100 µg/mL (Figure 5D,F). Interestingly, LPG at 100 µg/mL significantly enhanced LPS-induced IL-10 production, while HPG at different doses did not exhibit an obvious effect on LPS-stimulated IL-10 production (Figure 5E).

Ginseng extract powder (whole NZ-grown ginseng plants were collected in May 2019 from pine forest around Taupo, NZ. After air-dried, the samples were extracted through water and the extract was filtered, concentrated, and dried into powder) was provided by Kiwiseng Co. Ltd. (Rotorua, NZ) and marked as TGE (total ginseng extract).

Cell viability was evaluated using the 3-(4,5-dimethylthiazol-2-yl)- 2,5-diphenyltetrazolium bromide (MTT) assay [44]. Briefly, serial dilutions of ginseng extracts (TGE, NGE, HPG, and LPG) were added to each well of a 96-microwell plate. THP-1 cells were seeded to each well to a final density of 5 × 105 cells/mL. Control wells contained THP-1 cells and culture medium, but no tested extracts. Cells were incubated for 48, and 72 h before adding MTT (0.5 mg/mL) and incubated in the dark for 4 h. Formazan crystals were solubilized for 30 min with DMSO. Optical density measurements were recorded at 550 nm absorbance in a Multiskan FC Microplate Photometer (Thermo Scientific, Waltham, MA, USA) for the 96-microwell plate.

This research was funded by the Alpha–Massey Natural Nutraceutical Research Centre: RM18873.

The authors thank the Kiwiseng Co. Ltd. for providing the NZ-grown ginseng materials. We would like to acknowledge Gabrielle Plimmer for her help during cell culture work. 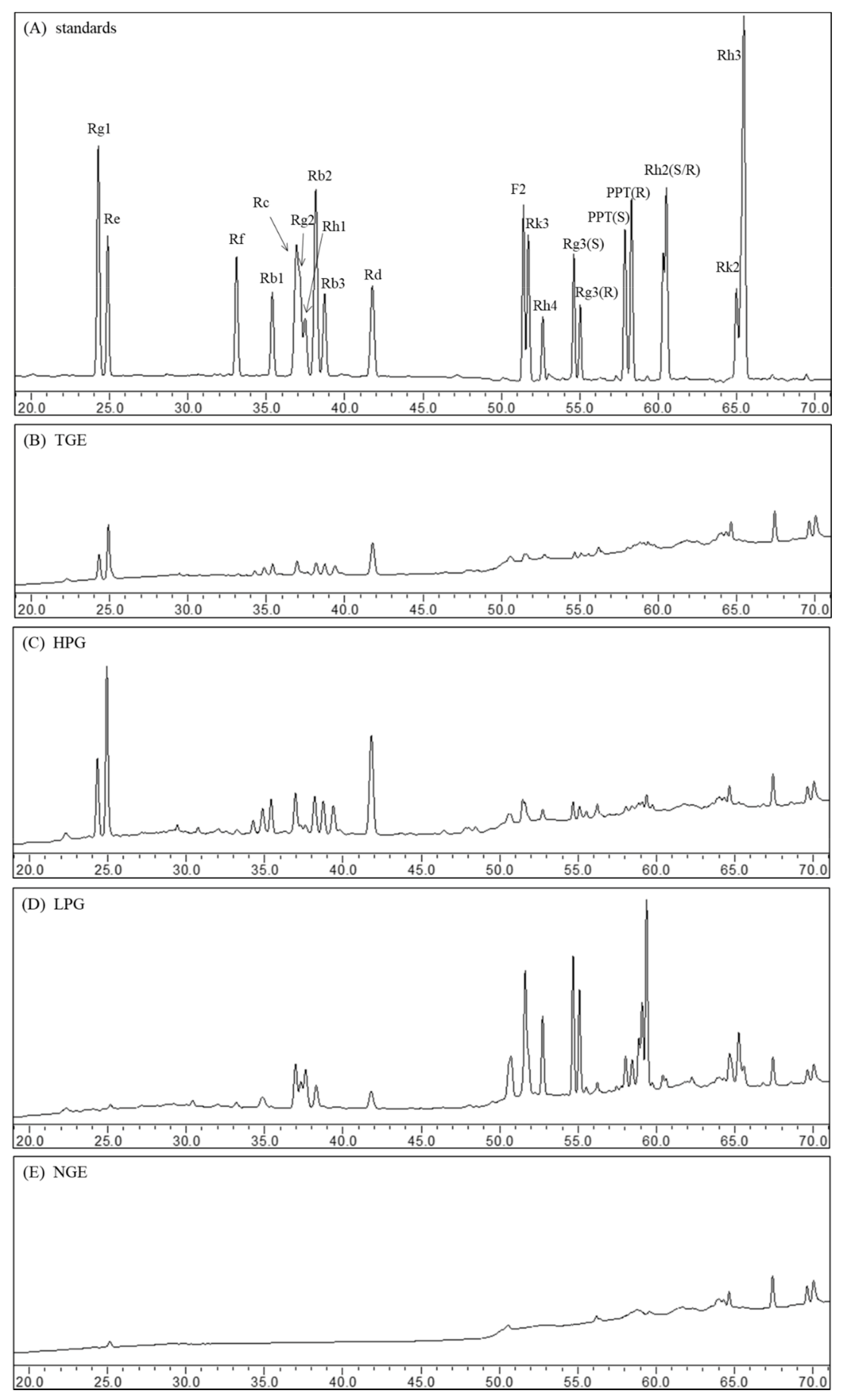 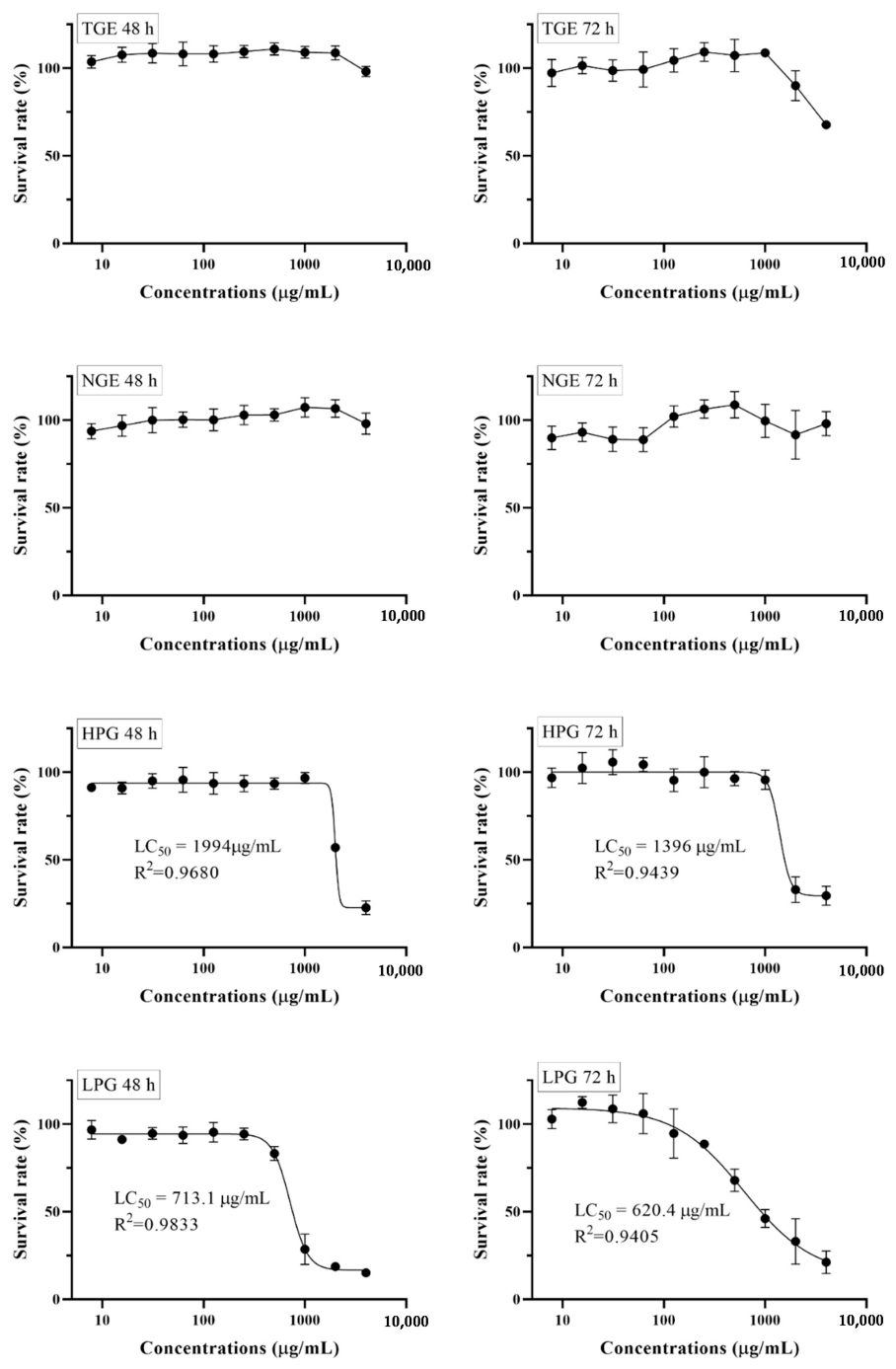 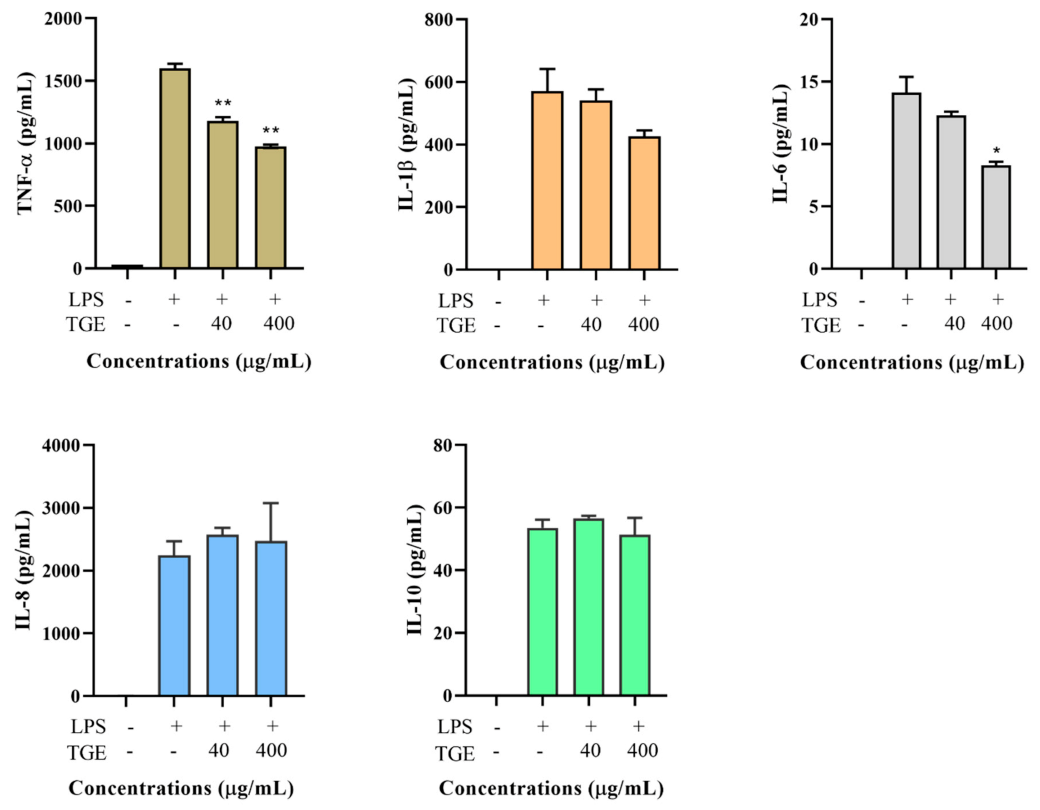 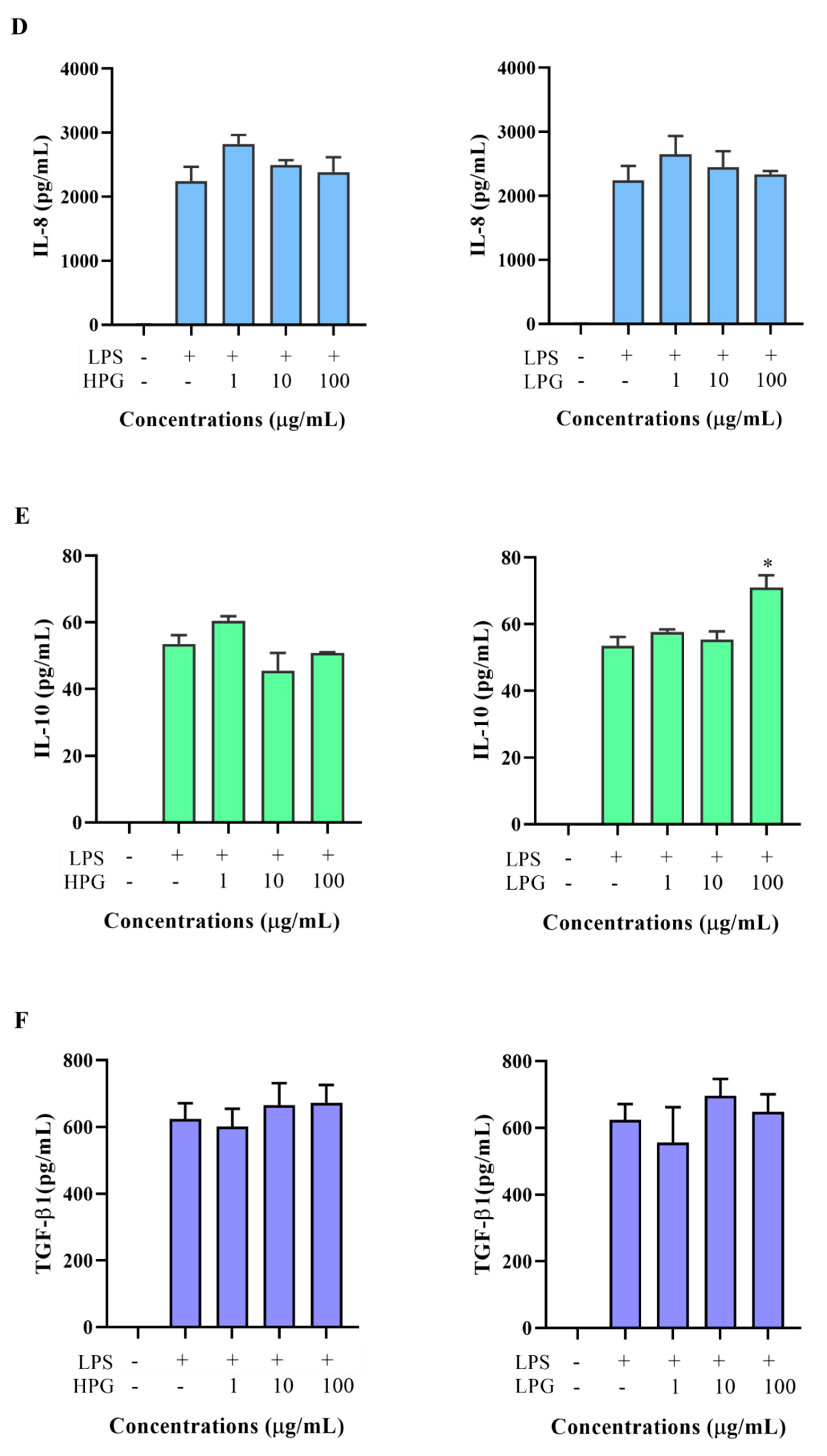