In recent decades, phytochemicals have been given much attention as potential candidates for cancer treatment because they exhibit anti-cancer effects without any noticeable toxicities [1]. Among phytochemicals, natural polyphenols are abundantly present in various edible fruits, vegetables and herbs, which are assumed to be related to a reduction in cancer risk [2,3]. Artemisia annua L., (Gaddongsook, Korean), an annual herb, has been used for a long time as a Korean folk medicine for the treatment of malaria, fever, and neurologic disorders [4,5]. In addition, it possesses anti-cancer activity [6]. However, the molecular mechanisms for the anti-cancer activities of Korean Artemisia annua still need elucidating.
Breast cancer is considered as one of the leading causes of cancer-related death worldwide, and its incidence is increasing in Korea [7,8]. Although the treatment outcomes for breast cancer have been improved, resistance to radiation (RT) and/or chemotherapy (CT) is a big obstacle to curing cancer. One of the major causes for the resistance to RT or CT is cancer stem cells (CSCs). Therefore, the development of a certain therapy targeted at CSCs holds hope for curing cancer.
Our team previously established radio-resistant MDA-MB 231 human breast cancer cells (RT-R-MDA-MB 231 cells) which exhibit enhanced aggressiveness, and cancer stem cell features [9,10]. These cells also manifest epithelial–mesenchymal transition (EMT), a process by which epithelial cells gain migratory and invasive properties to become mesenchymal stem cells. This means that the induction of EMT could change non-CSCs into CSCs [11,12,13]. From this evidence, EMT is also considered as a mechanism for the resistance to RT or CT [14]. Therefore, EMT and CSCs could be good targets to overcome the resistance to RT or CT.
We previously demonstrated that polyphenols extracted from Korean A. annua L. (pKAL) exhibited anti-cancer effects by inhibiting the EMT process without showing any significant cytotoxicity on normal cells [15,16]. Therefore, we hypothesized that pKAL harbors anti-cancer properties in overcoming radio resistance (RT-resistance) by suppressing CSCs and EMT. If pKAL exhibit significant anti-cancer effects on RT-R-MDA-MB-231 cells, pKAL-based phytotherapy will be an applicable and helpful option against resistance to RT or CT in breast cancer. In this study, we established RT-R-MDA-MB-231 cells following the previous protocol [9], determined whether pKAL would exhibit anti-cancer effects on the RT-R breast cancer cells, and further explored their molecular mechanisms by assessing the effects of pKAL on expressions of the proteins that were significantly higher expressed in RT-R-MDA-MB-231 cells than parental MDA-MB-231 cells, and assumed to be related to RT-resistance.

2.4. The Anti-Cancer Effects of pKAL on RT-R-MDA-MB-231 Cells Were not Closely Associated with JAK2/STAT3 Signaling

Polyphenols were extracted from Korean A. annua L. (pKAL) and characterized by Professor Shin (Gyeongsang National University, Jinju, Korea) [5]. Briefly, the lyophilized Korean A. annua L. (KAL) tissues including roots, stems, leaves, and flowers (10 g) were ground into powder, extracted in ethyl acetate (300 mL) at 80 °C for 20 h, and eluted with a mixture of methanol:dichloromethane (1:5, 25 mL). The isolated polyphenol mixtures were identified by HPLC-MS/MS according to the previous method [41].

According to the previous protocol [9], RT-R-MDA-MB-231 cells were generated by applying repetitive small doses of X-ray irradiation (2 Gy) using a 6-MV photon beam produced by a linear accelerator (Clinac 21EX, Varian Medical Systems, Inc., Palo Alto, CA) until a final dose of 50 Gy was achieved. The radiation dose rate was 1.0 Gy/min, and the cell medium was changed immediately after irradiation. When the cells reached ~90% confluence, they were sub-cultured into new flasks. At about 70% confluence, irradiation was resumed.

The cell viability assay was performed with 3-(4, 5-dimethylthiazol-2-yl)-2, 5-diphenyltetrazolium bromide (MTT) assay. For the MTT assay, paternal and RT-R-MDA-MB-231 cells were treated with pKAL for 24–72 h, and then incubated in 0.1 mg/mL MTT solution for 3 h at 37 °C in the dark. The absorbance of each well was measured at 540 nm with an enzyme-linked immunosorbent assay (ELISA) reader (Sunnyvale, CA, USA).

Parental or RT-R-MDA-MB-231 cells were seeded in 6-well plates (1 × 103 cells/well). Then, the cells were treated with pKAL at the indicated concentrations at 37 °C. After 24 h of treatment, the culture medium was discarded and replaced with fresh complete medium every 2–3 days. After 10 days, the medium was discarded, and each well was washed with PBS. The colonies were fixed in 100% methanol for 10 min, and then stained with 0.1% Giemsa staining solution for 30 min at room temperature. The number of visible colonies was counted.

After being treated with pKAL at the indicated concentrations for 24 h, the cells were harvested and lysed. Their proteins were quantified by the Bradford method. The proteins of the extracts were resolved by electrophoresis, electrotransferred to a polyvinylidene difluoride membrane (Amersham Biosciences, Little Chalfont, UK), and then the membrane was incubated with the primary antibodies followed by a conjugated secondary antibody to peroxidase. The blots were developed under an ECL detection system (Bio-Rad).

The gelatinolytic activities for MMP-9 (gelatinase-B) were assessed as previously described [42]. Briefly, polyacrylamide gels containing 1 mg/mL gelatin were run at 120 V, washed in 2.5% Triton X-100 for 1 h, and then incubated for 16 h at 37 °C in an activation buffer (50 mM Tris-HCl, 20 mM NaCl, 5 mM CaCl2 and 0.02% Brij35, pH 7.5). After staining with Coomassie Blue for 2 h, the gel was washed with a solution of 10% glacial acetic acid and 30% methanol for 1 h. White lysis zones indicating gelatin degradation were revealed by staining with Coomassie Brilliant Blue.

The results were expressed as means ± SEM from at least three independent experiments. Significant differences were determined by the one-way analysis of variance (ANOVA) with post-test Newman–Keuls for comparison of at least three treatment groups and Student’s t-test for two groups. Statistical significance was defined as p < 0.05.

This work was supported by Basic Science Research Program through the National Research Foundation of Korea (NRF) funded by the Ministry of Education (2017R1D1A3B05030971). 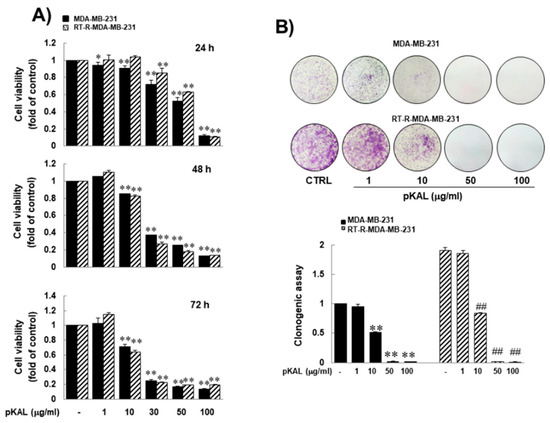 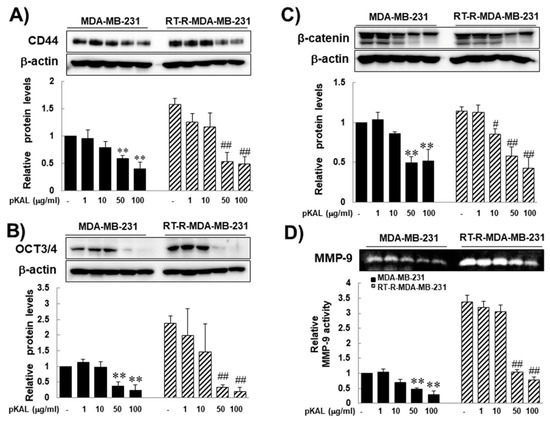 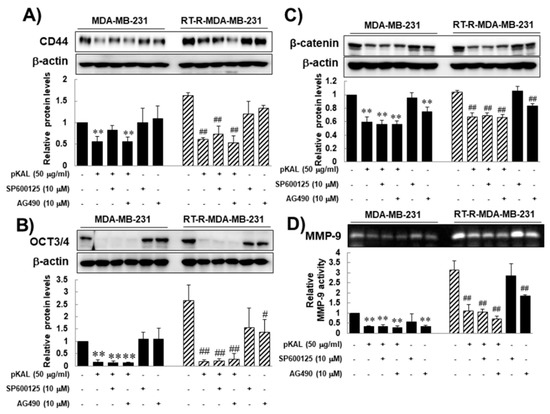