A Beneficial Role of Rooibos in Diabetes Mellitus: A Systematic Review and Meta-Analysis
Next Article in Special Issue

The bark of Acacia mearnsii De Wild. (black wattle) contains significant amounts of water-soluble components acalled “wattle tannin”. Following the discovery of its strong antioxidant activity, a wattle tannin dietary supplement has been developed and as part of developing new dietary supplements, a literature search was conducted using the SciFinder data base for “Acacia species and their biological activities”. An analysis of the references found indicated that the name of Acacia nilotica had been changed to Vachellia nilotica, even though the name of the genus Acacia originated from its original name. This review briefly describes why and how the name of A. nilotica changed. Tannin has been analyzed using the Stiasny method when the tannin is used to make adhesives and the hide-powder method is used when the tannin is to be used for leather tanning. A simple UV method is also able to be used to estimate the values for both adhesives and leather tanning applications. The tannin content in bark can also be estimated using NIR and NMR. Tannin content estimations using pyrolysis/GC, electrospray mass spectrometry and quantitative 31P-NMR analyses have also been described. Tannins consists mostly of polyflavanoids and all the compounds isolated have been updated. Antioxidant activities of the tannin relating to anti-tumor properties, the viability of human neuroblastoma SH-SY5Y cells and also anti-hypertensive effects have been studied. The antioxidant activity of proanthocyanidins was found to be higher than that of flavan-3-ol monomers. A total of fourteen papers and two patents reported the antimicrobial activities of wattle tannin. Bacteria were more susceptible to the tannins than the fungal strains tested. Several bacteria were inhibited by the extract from A. mearnsii bark. The growth inhibition mechanisms of E. coli were investigated. An interaction between extracts from A. mearnsii bark and antibiotics has also been studied. The extracts from A. mearnsii bark inhibit the growth of cyanobacteria. Wattle tannin has the ability to inactivate α-amylase, lipase and glucosidase. In vivo experiments on anti-obesity and anti-diabetes were also reported. Several patents relating to these enzymes for anti-diabetes and anti-obesity are in the literature. In addition, studies on Acacia bark extract regarding its antitermite activities, inhibition of itching in atopic dermatitis and anti-inflammatory effects have also been reported. The growth of bacteria was inhibited by the extract from A. mearnsii bark, and typical intestinal bacteria such as E. coli, K. pneumoniae, P. vulgaris and S. marcescenes was also inhibited in vitro by extracts. Based on these results, the Acacia bark extract may inhibit not only the growth of these typical intestinal bacteria but also the growth of other types of intestinal bacteria such as Clostridium and Bacteroides, a so-called “bad bacteria”. If the tannin extract from A. mearnsii bark inhibits growth of these “bad bacteria” in vivo evaluation, the extracts might be usable as a new dietary supplement, which could control the human intestinal microbiome to keep the body healthy. View Full-Text
Keywords: Acacia mearnsii bark; wattle tannin; proanthocyanidins; biological activities Acacia mearnsii bark; wattle tannin; proanthocyanidins; biological activities
►▼ Show Figures 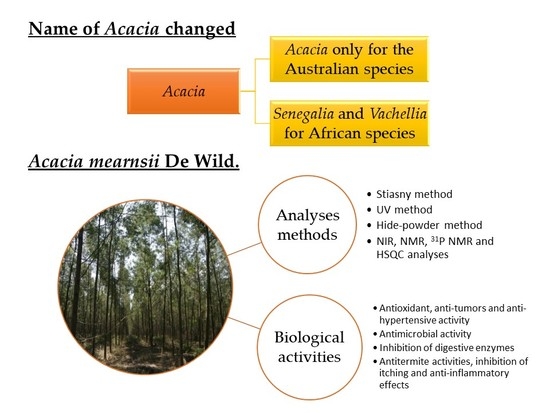