Hypnotics and Risk of Cancer: A Meta-Analysis of Observational Studies
Previous Article in Journal

Background and objectives: Characterization of pediatric coronavirus disease 2019 (COVID-19) is necessary to control the pandemic, as asymptomatic or mildly infected children may act as carriers. To date, there are limited reports describing differences in clinical, laboratory, and radiological characteristics between asymptomatic and symptomatic infection, and between younger and older pediatric patients. The objective of this study is to compare characteristics among: (1) asymptomatic versus symptomatic and (2) less than 10 versus greater or equal to 10 years old pediatric COVID-19 patients. Materials and Methods: We searched for all terms related to pediatric COVID-19 in electronic databases (Embase, Medline, PubMed, and Web of Science) for articles from January 2020. This protocol followed the Preferred Reporting Items for Systematic Reviews and Meta-Analysis guidelines. Results: Eligible study designs included case reports and series, while we excluded comments/letters, reviews, and literature not written in English. Initially, 817 articles were identified. Forty-three articles encompassing 158 confirmed pediatric COVID-19 cases were included in the final analyses. Lymphocytosis and high CRP were associated with symptomatic infection. Abnormal chest CT more accurately detected asymptomatic COVID-19 in older patients than in younger ones, but clinical characteristics were similar between older and younger patients. Conclusions: Chest CT scan findings are untrustworthy in younger children with COVID-19 as compared with clinical findings, or significant differences in findings between asymptomatic to symptomatic children. Further studies evaluating pediatric COVID-19 could contribute to potential therapeutic interventions and preventive strategies to limit spreading.
Keywords: coronavirus disease 2019 (COVID-19); novel coronavirus 2019; SARS-CoV-2; asymptomatic; child; infant; characteristics; radiography coronavirus disease 2019 (COVID-19); novel coronavirus 2019; SARS-CoV-2; asymptomatic; child; infant; characteristics; radiography

Since December 2019, the severe acute respiratory syndrome coronavirus 2 (SARS-CoV-2) which causes coronavirus disease 2019 (COVID-19) emerged as a virus causing substantial morbidity and mortality worldwide. There have been over 10 million confirmed cases and over 500,000 deaths worldwide [1]. The transmission of COVID-19 has been shown to occur during pre-symptomatic or asymptomatic periods which contribute to widespread transmission of the infection [2].
The reported number of cases worldwide implicates that elderly persons are especially vulnerable to the disease, contracting from children [3,4]. In addition, most children with COVID-19 have been reported to present with mild symptoms [5]. However, many studies suggested that children, despite mild or no symptoms, could be a source of viral transmission [6,7]. It has been reported that the viral load in asymptomatic patients was similar to that in symptomatic patients, especially during the early phase of infection [8,9].
There have been some systematic reviews and meta-analyses on COVID-19 aimed at characterizing SARS-CoV-2 infections in pediatric age groups [10]. However, no study, to date, has focused on the difference between symptomatic and asymptomatic pediatric patients. Previous studies were mainly based on information from adult populations and limited data were available for children with COVID-19 [5,11,12]. Therefore, we conducted a systematic review with the aim to investigate clinical, laboratory, and radiographic characteristics and differences among symptomatic and asymptomatic COVID-19 confirmed children.

The primary goal of this study was to systematically evaluate and characterize reported pediatric COVID-19 cases. An age threshold of 10 years was selected to distinguish between findings before and after the onset of puberty, which can vary with ethnicity and gender but generally begins as early as age 10. Analyses were stratified by clinical characteristics, laboratory findings, and radiological signs in children with COVID-19 based on this age threshold of 10 years and the presence or absence of symptoms. For asymptomatic patients, the continued absence of symptoms was also evaluated when reported at follow-up.

2.4. Study Selection and Assessment of Risk of Bias

Initial results were reviewed by screening for duplicates, and then were screened by title and format for eligibility criteria. After full-text screening, a targeted search was conducted to generate additional articles focusing on asymptomatic children with COVID-19, using the same method used for the initial search.

Three independent investigators extracted data from each eligible study using a standardized data extraction form. Data were cross-checked for duplicate articles, duplicate cases, or discrepancies. Disagreements between reviewers regarding the data were resolved with reviews from three other independent investigators (E. Kim, S. Cha, and J. Yang). Statistical analyses were performed using SPSS version 26.0. Power was calculated using G*Power version 3.1.9.6. Percentages and means ± standard deviation were used to summarize categorical and continuous variables, respectively. The Kolmogorov–Smirnov test was used to test the normal distribution and the Mann–Whitney U test was used for non-normal distribution variables. The Chi-square test was performed to evaluate differences between age groups and symptomatic/asymptomatic groups, while the number in each cell was below 5, Fisher’s exact test was performed, and the student’s T test was used to evaluate differences in age.

Initially, 817 articles were identified in a preliminary search. After screening to exclude duplicates, 673 articles were reviewed by title screening for topic (focusing on pediatric COVID-19), format (excluding comments and reviews), and language. Of 197 reviewed from full-text screening, 86 were unrelated to pediatric COVID-19, 41 were not case reports, 31 were letters or reviews, 10 were pooled patient data, and 4 were inaccessible. An additional search was conducted and resulted in 18 additional eligible articles. Forty-three articles met all inclusion criteria and were included in final analyses (Figure 1).

3.2. Clinical Characteristics Based on the Presence of Symptoms

3.3. Clinical Characteristics Based on Age

Table 1 summarizes the characteristics of patients according to age (i.e., ≥10 years or <10 years), and Table 3 characterizes these two groups based on the presence of symptoms. The mean age for patients below 10 years old was 3.09 years, and the mean age for patients at or above 10 was 12.60 years (Table 1). Older patients were more likely to have an increased serum creatinine (p = 0.065), although this was not significant. Children above 10 years of age were more likely to present with GGOs (32.0% <10 years vs. 56.5% ≥10 years, p = 0.049).
Stratified by the presence of symptoms, among asymptomatic carriers, children above or equal to 10 years were more likely to present with abnormal radiological findings. Five out of six children (83%) above 10 years demonstrated typical ground-glass opacities with accompanying radiological signs of pneumonia. These signs were present in 20.8% of children below 10 years (p = 0.009). Likewise, among symptomatic cases of pediatric COVID-19, those of 10 years and above more frequently showed increased creatinine levels (p = 0.063).

No deaths were reported among symptomatic and asymptomatic populations. ICU admission was reported in 16 of 40 cases in the symptomatic population, and 5 of 18 cases in the asymptomatic group (Supplementary Materials Tables S1 and S2). Two were neonates delivered from SARS-CoV-2 infected women and immediately transferred to neonatal ICU (NICU) for isolation and observation. The reasons for ICU admission for the other three children were not reported. All 25 asymptomatic cases with outcome data were discharged, improved, or stable following treatment. Out of 15 neonatal cases, six cases were asymptomatic. Seven asymptomatic patients received antivirals or immunoglobulin therapy. Three of 41 symptomatic cases with outcome data remained in the ICU at the studies’ conclusion, whereas the rest were stable or recovered. Most recovered following antiviral, antibiotic, and/or oxygen therapy. Seven recovered without the need of supportive care. One patient with a history of sickle cell disease developed acute respiratory distress syndrome (ARDS) in the symptomatic group, who recovered following non-invasive ventilation, red blood cell exchange and simple transfusion, anticoagulation therapy, and one pulse of intravenous tocilizumab [36]. 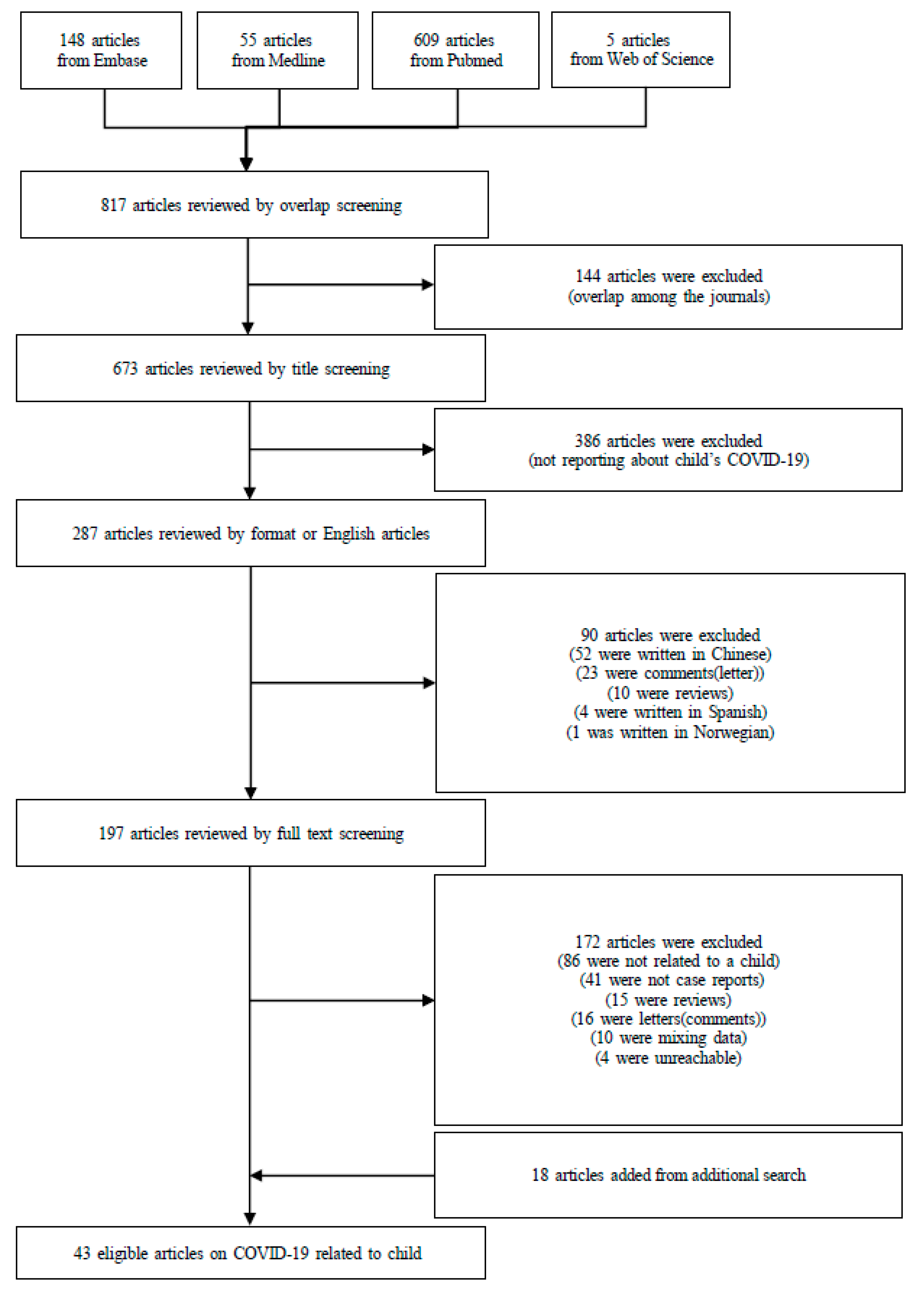