Prognostic Significance of ADAM17 for Gastric Cancer Survival: A Meta-Analysis
Next Article in Special Issue

The Effect of Muscle Exercise on Perforators Flow: A Prospective Cohort Study
Previous Article in Journal

Pharmacological Interactions in the Elderly
Previous Article in Special Issue

Background and objectives: Skin grafting is a method usually used in reconstructive surgery to accelerate skin regeneration. This method results frequently in unexpected scar formations. We previously showed that cutaneous wound-healing in normal mice is accelerated by a micrograft (MG) technique. Presently, clinical trials have been performed utilizing this technology; however, the driving mechanisms behind the beneficial effects of this approach remain unclear. In the present study, we focused on five major tissue reactions in wound-healing, namely, regeneration, migration, granulation, neovascularization and contraction. Methods: Morphometrical analysis was performed using tissue samples from the dorsal wounds of mice. Granulation tissue formation, neovascularization and epithelial healing were examined. Results: The wound area correlated well with granulation sizes and neovascularization densities in the granulation tissue. Vascular distribution analysis in the granulation tissue indicated that neovessels extended and reached the subepidermal area in the MG group but was only halfway developed in the control group. Moreover, epithelialization with regeneration and migration was augmented by MG. Myofibroblast is a known machinery for wound contraction that uses α-smooth muscle actin filaments. Their distribution in the granulation tissue was primarily found beneath the regenerated epithelium and was significantly progressed in the MG group. Conclusions: These findings indicated that MG accelerated a series of wound-healing reactions and could be useful for treating intractable wounds in clinical situations. View Full-Text
Keywords: micrograft; wound-healing; epidermis; granulation; neovascularization; histopathology micrograft; wound-healing; epidermis; granulation; neovascularization; histopathology
►▼ Show Figures 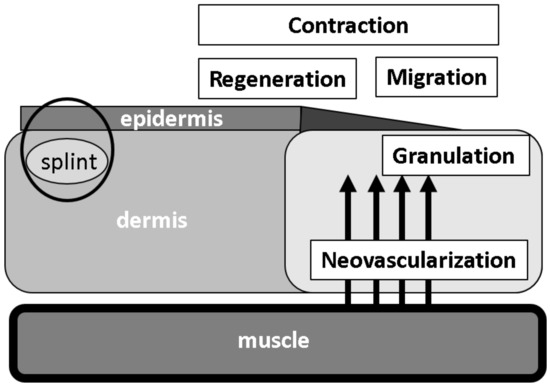