Comparison of WBGTs over Different Surfaces within an Athletic Complex

Many athletic governing bodies are adopting on-site measurement of the wet-bulb globe temperature (WBGT) as part of their heat safety policies. It is well known, however, that microclimatic conditions can vary over different surface types and a question is whether more than one WBGT sensor is needed to accurately capture local environmental conditions. Our study collected matched WBGT data over three commonly used athletic surfaces (grass, artificial turf, and hardcourt tennis) across an athletic complex on the campus of the University of Georgia in Athens, GA. Data were collected every 10 min from 9:00 a.m. to 6:00 p.m. over a four-day period during July 2019. Results indicate that there is no difference in WBGT among the three surfaces, even when considered over morning, midday, and afternoon practice periods. We did observe microclimatic differences in dry-bulb temperature and dewpoint temperature among the sites. Greater dry-bulb and lower dewpoint temperatures occurred over the tennis and artificial turf surfaces compared with the grass field because of reduced evapotranspiration and increase convective transfers of sensible heat over these surfaces. The lack of difference in WBGT among the surfaces is attributed to the counterbalancing influences of the different components that comprise the index. We conclude that, in a humid, subtropical climate over well-watered grass, there is no difference in WBGT among the three athletic surfaces and that, under these circumstances, a single monitoring site can provide representative WBGTs for nearby athletic surfaces.
Keywords: athletic surfaces; WBGT; weather; heat stress; safety athletic surfaces; WBGT; weather; heat stress; safety

Exertional heat illnesses (EHI) affect thousands of athletes each year and exertional heat stroke is among the leading causes of death among athletes [1]. Environmental monitoring coupled with activity modification is a key component of a well-designed heat policy [2,3]. Importantly, on-site measurements can better capture local microclimate conditions than remote observations from weather stations as differences in sheltering, surface type, or solar exposure can influence heat stress [4,5,6]. As such, regarding the interscholastic participant, numerous high school athletic associations now require on-site measurement of environmental conditions using the wet-bulb globe temperature (WBGT) [7]. A question that has been raised among sports medicine professionals is whether a single weather measurement can represent environmental conditions on nearby athletic fields when there are a variety of surfaces (e.g., grass, artificial turf, hardcourt tennis, etc.) used for athletic play or if measurements are required over each surface. Microclimatic conditions over small areas can be greatly affected by the characteristics of the underlying surface [8]. Multiple studies have identified that athletic surface type, especially artificial turf, alter surface temperatures relative to grass covered surfaces, and which may affect heat stress [9,10,11,12,13]. What has been less explored is how these surface changes impact ambient air temperatures and humidity levels above the athletic surfaces and integrated bioclimatic indices like the WBGT [5,14,15,16]. Both the cost of WBGT sensors and the staffing to monitor multiple sensors may pose barriers to high schools or other organizations adopting the practice of monitoring environmental conditions where multiple sites are used. Our study seeks to identify if different athletic surfaces, which are commonly present on high school and college campuses, and other athletic/recreational facilities may affect WBGT measurements. In particular, we ask two key questions:

(1)
Does the WBGT vary by athletic surface (artificial turf, hardcourt tennis, and grass)?
(2)
Is a single monitoring station able to capture local WBGT conditions in an athletic complex?

WBGT data were collected over three different surface types commonly associated with the sports of American football, soccer, and tennis on the campus of the University of Georgia (UGA) in Athens, GA, USA over a five-day period, 24–28 July, 2019 (Figure 1). Athens, GA has a humid, subtropical climate characterized by hot and humid summers [17]. Data were collected over commonly used athletic surfaces, including natural grass, artificial turf (FieldTurf, Montreal, QC, Canada), and hardcourt tennis (Plexipave, Andover, MA, USA) surfaces, which were all located between 162 and 423 m of each other. The natural grass surface was well watered. The day before the study (23 July), 3.56 mm of precipitation was recorded at the on-site WeatherSTEM station and the grass field was watered between 2:30 a.m. and 3:30 a.m. on two days (26 and 28 July) during the study. Three WBGT monitors (Kestrel 5400 heat stress meters, Nielsen-Kellerman, Boothwyn, PA, USA) were set on a tripod at each site in a sunny location that would not be subjected to shade (other than cloud cover) during the data collection period. In addition, the locations we selected were at least 15 m from another surface type and had sheltering that would reduce the effects of local advection. The tennis court, for instance, is located adjacent to an asphalt parking lot but is separated by a mesh covered fence that would reduce wind speeds.
Over each surface, the WBGT monitors were set up on the tripods at 1.2 m above the surface to represent an anthropometric scale [18]. The dry-bulb temperature, natural wet-bulb temperature, globe temperature, dewpoint temperature, and wind speed were collected every 10 min from 9:00 a.m. to 6:00 p.m. The WBGT was computed as a weighted average of the dry-bulb temperature (DB), natural wet-bulb temperature (WB), and globe temperature (GT) using the following equation [19]:
WBGT = 0.7 × WB + 0.2 × GT + 0.1 × DB.
We followed the manufacturer’s recommendation and allowed the unit to equilibrate for 15 min prior to collecting data for analysis [20]. Observations with relative humidity <15% or >95% were removed from the dataset as they exceed the specification range for sensor accuracy [21]. For comparison purposes, only times when all three surfaces had viable observations were retained. In total, 243 observations from each surface were compared. These observations were divided into three different practice periods: morning (9:00–11:59 a.m., n = 63), midday (noon–2:59 p.m., n = 90), and afternoon (3:00–5:59 p.m., n = 90). Weather data (e.g., temperature, humidity, wind speed, and solar radiation) were collected from a WeatherSTEM station that is located within the sports complex (Figure 1). This weather dataset was used to identify the overall weather conditions during the study days [22].
Summary statistical measures were used to quantify WBGTs and other meteorological variables among the surfaces, with a focus on median for central tendency and interquartile range for variability as not all data distributions were normal. Normality was determined using the Kolmogorov–Smirnov test and visual inspection of the Q–Q plot and histogram. Pearson’s correlation coefficient was used to assess the association of WBGTs between the surfaces (i.e., grass vs. artificial turf; grass vs. tennis, and artificial turf vs. tennis) and the relationship between the WBGT over a particular surface with weather station data (e.g., temperature, dewpoint temperature, wind speed, and solar radiation). ANOVA (or Kruskal–Wallis one-way analysis of variance on ranks when the required assumptions were not met) was used to compare the effect of athletic surface type on WBGT values using α = 0.05. A similar approach was used to assess the effect of surface type on the WBGT components as well as dewpoint temperature. All statistical analyses were completed using SPSS (version 26; IMB Corp, Armonk, NY, USA).

Weather conditions were determined from a centrally located weather observing station (Figure 1). Over the five-day study, maximum air temperatures ranged from 30.3 to 32.6 °C and minimum temperatures were between 17.7 and 20.2 °C (Figure 2a). Average daily dewpoint temperature varied from 15.6 to 19.4 °C (Figure 2a). Maximum solar radiation exceeded 1000 W m−2 each day (1032–1097 W m−2) with considerable variability, particularly in the afternoon in response to changing cloud cover (Figure 2b). Based on 11 years (2009–2019) of July data from a nearby weather station at the UGA Climatology Research Laboratory (~1.8 km from study site with a longer period of record than the WeatherSTEM station), the study days had lower than average maximum daytime temperatures (long-term mean = 33.2 °C) and humidity (long-term mean = 22.5 °C) but peak solar radiation values that were close to average.

3.2. Differences in WBGT among Athletic Surfaces

3.3. Differences in Microclimates among Athletic Surfaces

Our study indicates that in a humid, subtropical climate over a well-watered grass field, there is no difference in WBGT when compared to artificial turf and hardcourt tennis surfaces. Yet, there are clear microclimatic differences in dry-bulb and dewpoint temperatures among the three surfaces that provide counterbalancing influences on components of the WBGT, ultimately limiting the total difference in the index. Thus, a single monitoring site is sufficient to capture representative WBGTs over a variety of commonly used athletic surfaces in close proximity, when meeting our study conditions.

We would like to thank the UGA Athletic Association for allowing us to use their facilities for this study. 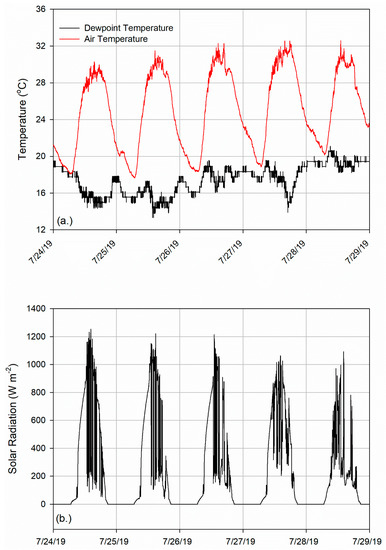 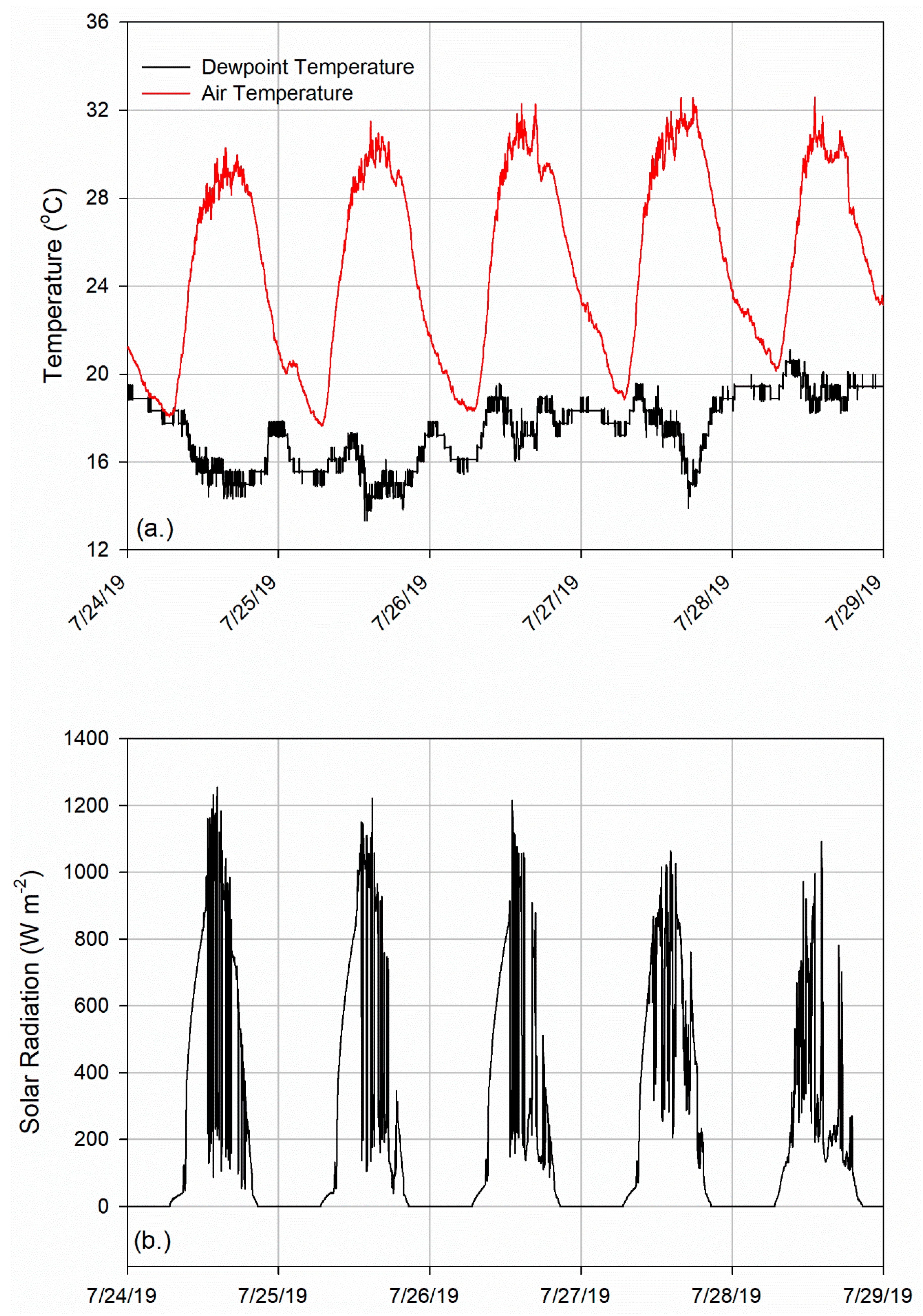 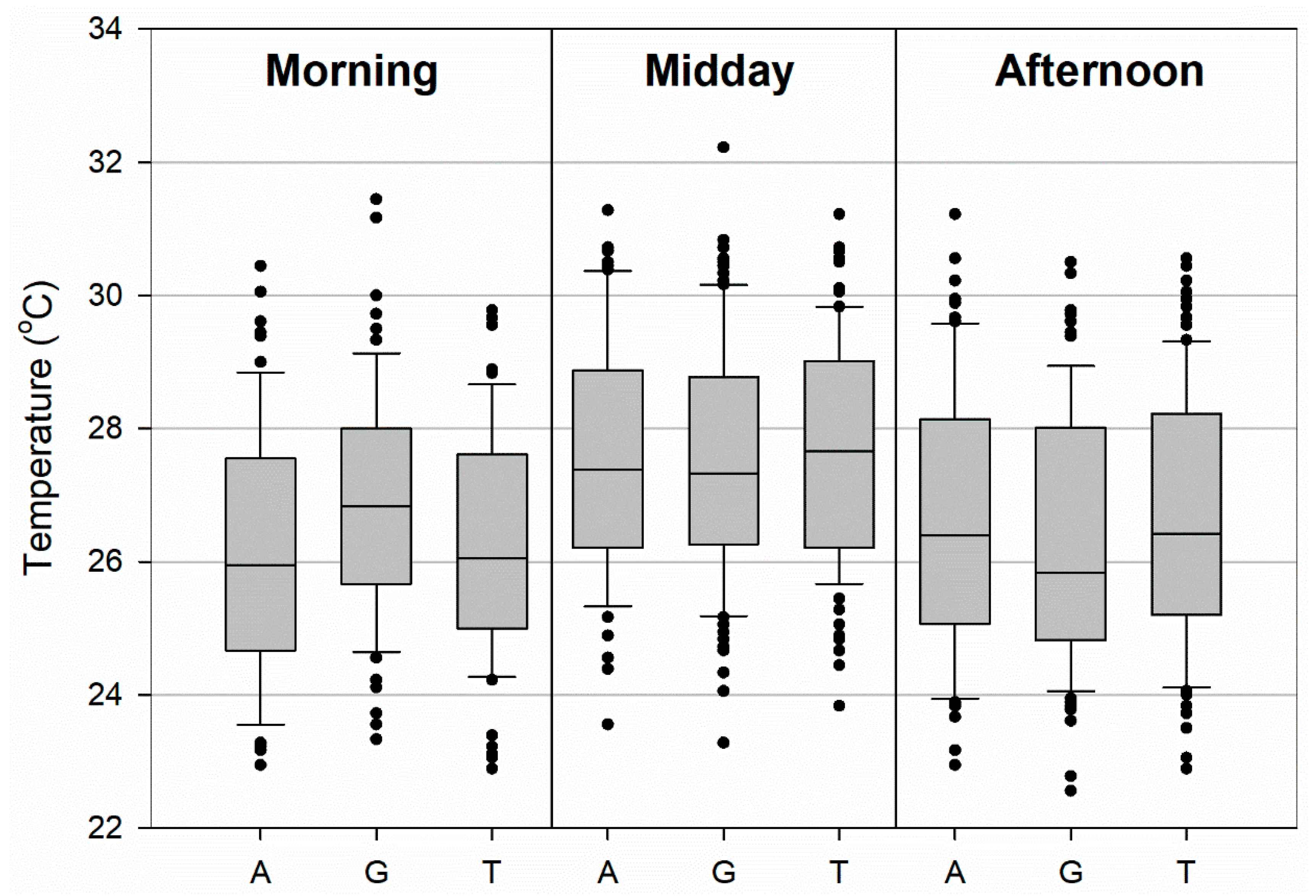 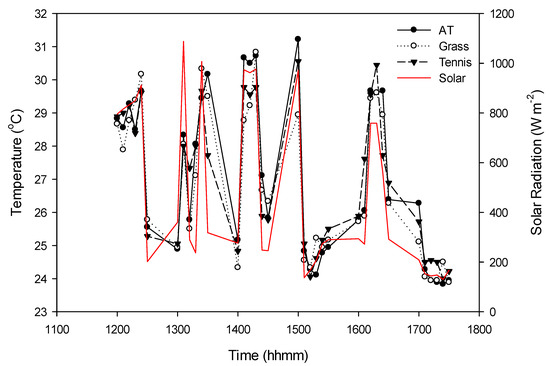 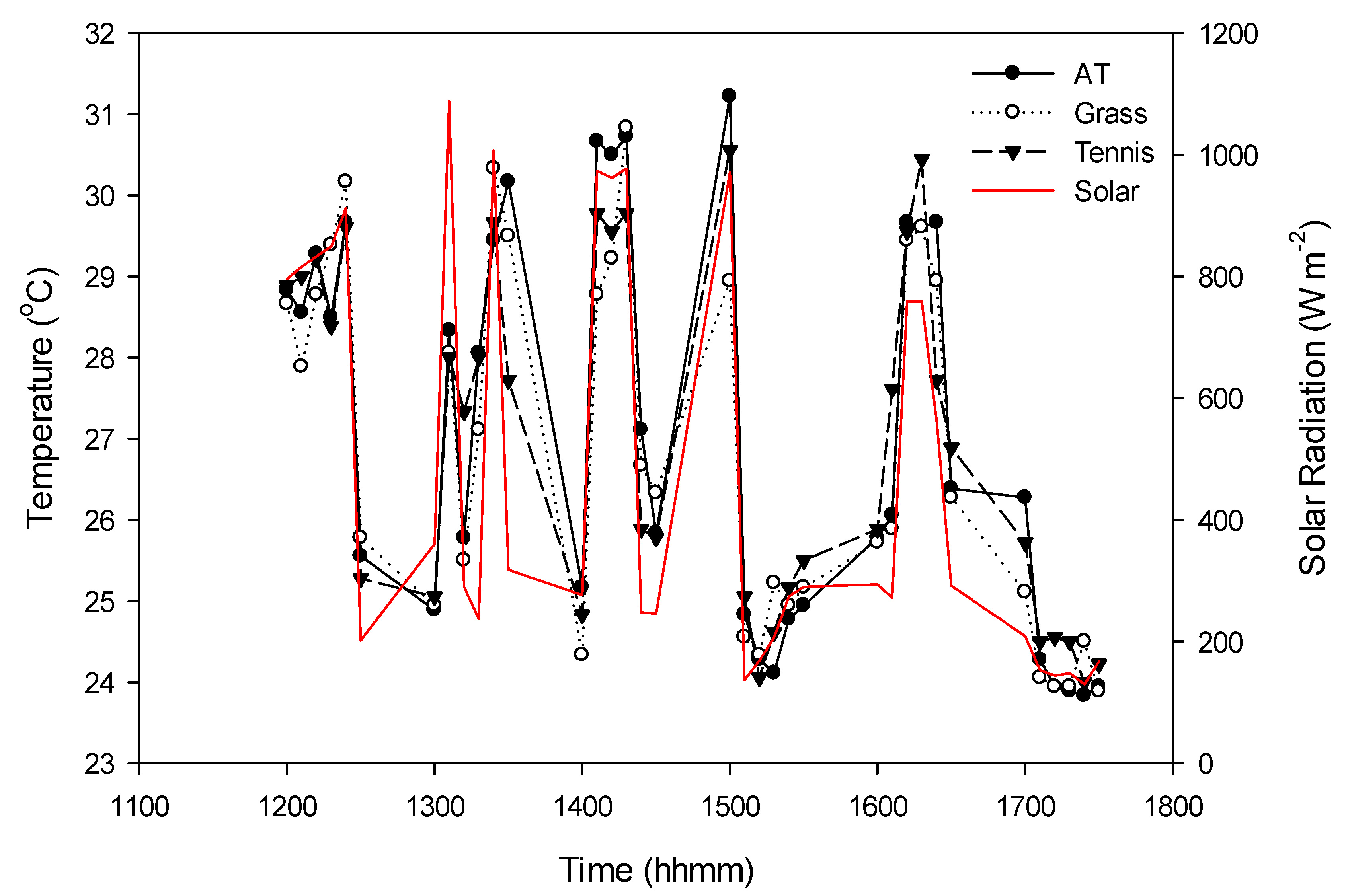