Cervical-Vaginal Mucin in Fertility Assessment: CA125 as a Predictor of the Fertile Phase of the Normal Menstrual Cycle

The outbreak of coronavirus disease 2019 (COVID-19) occurred in Wuhan (Hubei Province, China) at the end of December 2019, and it has been declared a pandemic in March 2020 by the World Health Organization (WHO). As of 20 June, 2020, COVID-19 has caused 8,666,697 confirmed cases and 460,066 deaths globally, including 238,011 confirmed cases and 34,561 deaths in Italy [1]. However, the real prevalence and mortality rates of COVID-19 are still unknown due to the large presence of asymptomatic and mild symptomatic patients.
COVID-19 is etiologically caused by SARS coronavirus 2 (SARS-CoV-2), a virus closely related to the SARS virus [2]. In COVID-19, the period between the infection and onset of symptoms is approximately 14 days. The disease can be asymptomatic or presenting with a wide range of symptoms, including fever, cough, diarrhea, fatigue, and mild pneumonia; even acute respiratory distress syndrome (ARDS) with multiorgan failure and intravascular disseminated coagulopathy may occur. Nevertheless, the severity of the infection depends on a variety of factors, such as age and comorbidity of patients [3,4]. The mode of transmission of SARS-CoV-2 infection is based on release of droplets and aerosols [2].
Pregnant women are more susceptible to respiratory infections due to the physiologically adaptive changes of the respiratory tract, such as diaphragm elevation, increased oxygen consumption, and edema of the respiratory tract mucosa [5]; moreover, high concentrations of estrogens cause congestion and excessive secretion of airway epithelial cells [6,7]. The association between adverse obstetrical–neonatal outcomes and physiopathological changes related to respiratory viral infection has been reported in severe acute respiratory syndrome (SARS) and the Middle East respiratory syndrome (MERS) [8]; nevertheless, it has been suggested that the clinical presentation of COVID-19 in pregnant women tends to be similar to that of the normal population [4].
There is no evidence from the studies of the current literature about COVID-19 maternal–fetal transmission during pregnancy and, in particular, in the third trimester of pregnancy, or during postpartum breastfeeding [9]; however, further studies will draw a conclusion on this emergent topic, which not only has a significant public health impact but also represents a real issue for the management of pregnant women with suspected or confirmed COVID-19 [7].
This report aims to describe a case of placental swabs positive for SARS-CoV-2 RNA obtained from an asymptomatic woman in the third trimester of pregnancy with positive rhino-pharyngeal swab, who underwent urgent cesarean section in our center.

Clinical data on maternal and neonatal outcomes of pregnant women with SARS-CoV-2 infection remain limited. This was a report of a positive placental swab for SARS-CoV-2 in an asymptomatic woman in the third trimester of pregnancy with a positive rhino-pharyngeal swab for COVID-19, who underwent an urgent caesarian section for obstetric indications. We are aware that our study does not have a design and a methodology suitable to definitively support a causal relationship between COVID-19 and placental infection or fetal transmission, similarly to other studies on the same topic published in the current literature.
New studies will draw a definitive answer on the impact of COVID-19 on pregnancy, and in particular, on placental mechanisms that could be involved in response to maternal infection.

The following are available online at https://www.mdpi.com/1010-660X/56/6/306/s1, Figure S1: Reverse-transcriptase quantitative PCR amplification curves and high-resolution melting curves of the amplification products for additional technical replicate of sample obtained in the placental fetal surface proximity to the umbilical cord.

Ezio Fulcheri (University of Genoa, Italy) for mentoring and diagnostic advice. Barbara Galano and Gaetano De Rosa for their crucial role in performing real-time PCR for COVID-19 in our hospital. 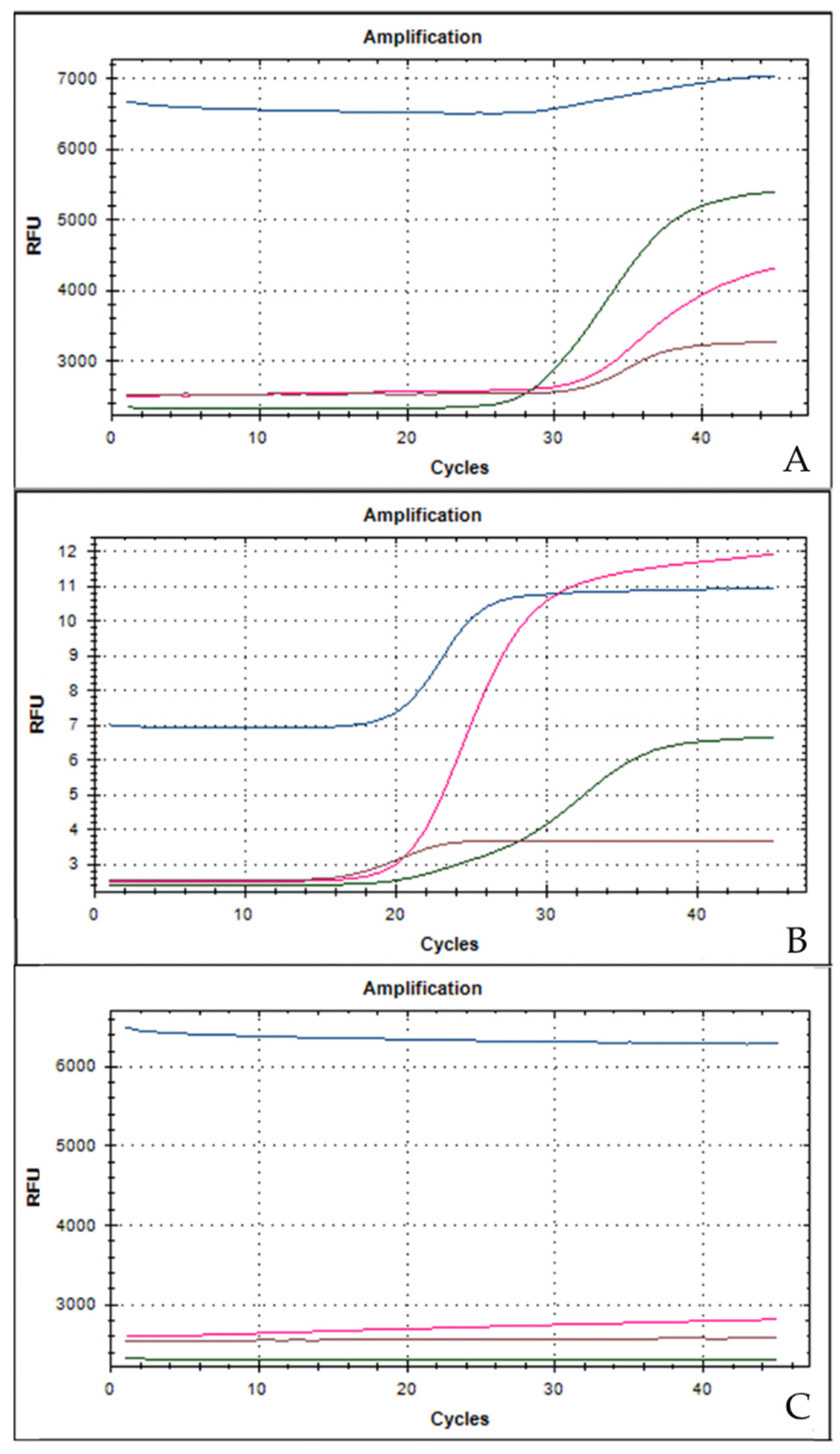 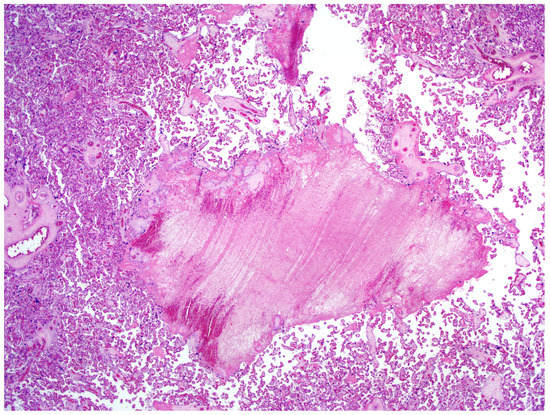 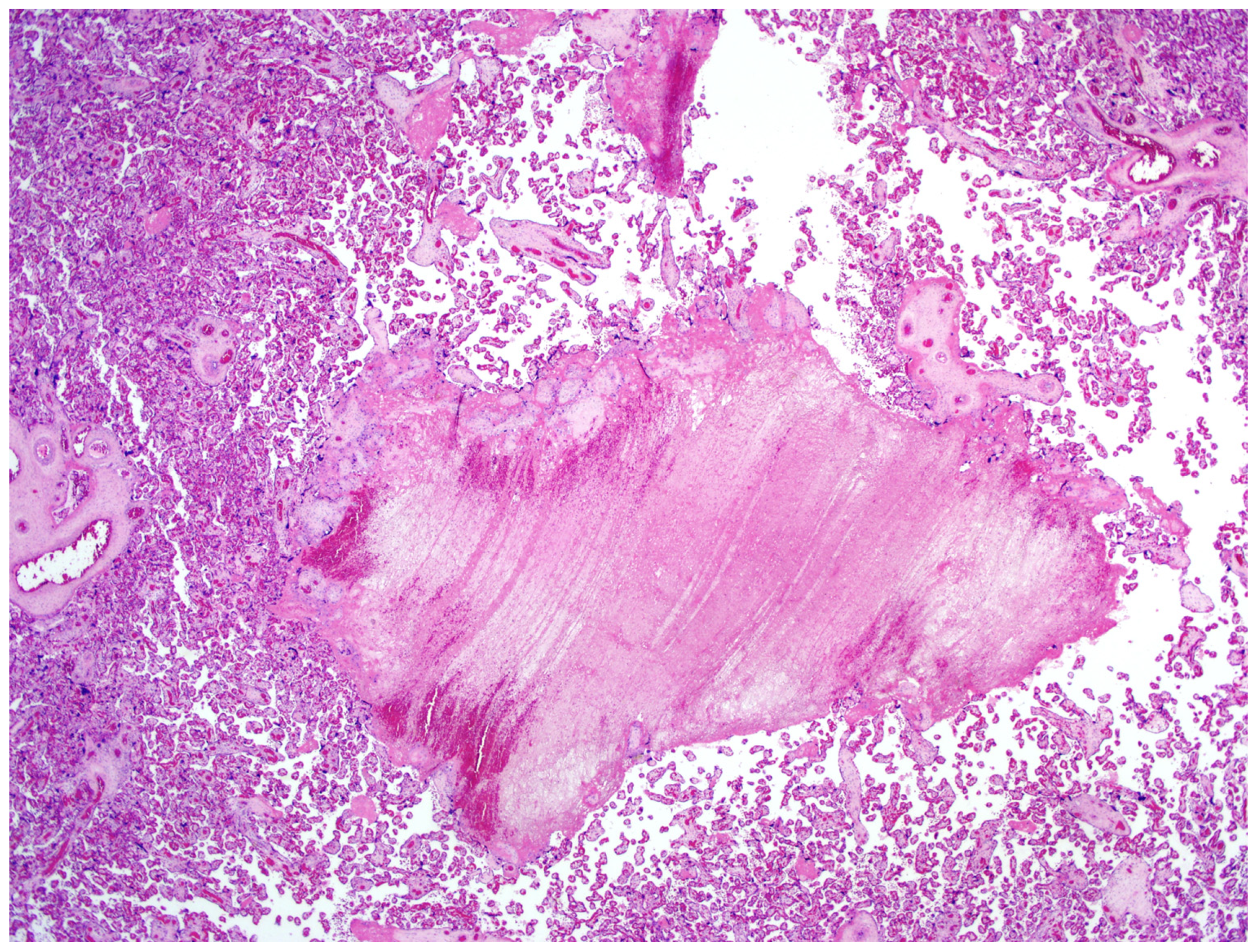