Kidney Transplant in Fabry Disease: A Revision of the Literature
Previous Article in Special Issue

Gastrointestinal Symptoms of and Psychosocial Changes in Inflammatory Bowel Disease: A Nursing-Led Cross-Sectional Study of Patients in Clinical Remission

Incidence of Prostate Cancer in Inflammatory Bowel Disease: A Meta-Analysis

Background and objectives: Inflammatory bowel disease (IBD) is associated with an increased risk of developing colorectal cancer as well as some extra-intestinal tumors, but there are still limited data about the risk of prostate cancer (PC). To analyze if there is an increased risk of PC in patients affected by IBD, we performed a systematic review with meta-analysis. Materials and Methods: A Pubmed search of all studies comparing standardized incidence ratio (SIR) or odds ratio (OR) or relative risks (RR) of PC between IBD and non IBD groups, published until March 2020 was conducted. The study protocol was registered on PROSPERO. Twelve studies, mostly population studies, were included. The quality score of these studies, evaluated by the Newcastle–Ottawa Scale, was 7. The heterogeneity was high among the studies in which ulcerative colitis (UC) was considered separate from Crohn’s disease (CD) and in the studies that considered UC and CD together (“IBD-studies”), while it was low in the studies which considered CD separate from UC. Results: The relative risk of developing PC was 1.71 (95% confidence interval [CI] 1.16–2.51, p = 0.007) in IBD, 1.10 (95%CI 0.98–1.25, p = 0.116) in CD, and 1.22 (95%CI 0.98–1.51, p = 0.07) in UC. Conclusions: Patients with IBD appear to have a slightly increased risk of PC compared to the general population. View Full-Text
Keywords: Crohn’s disease; ulcerative colitis; urological cancer; screening; systematic review Crohn’s disease; ulcerative colitis; urological cancer; screening; systematic review
►▼ Show Figures 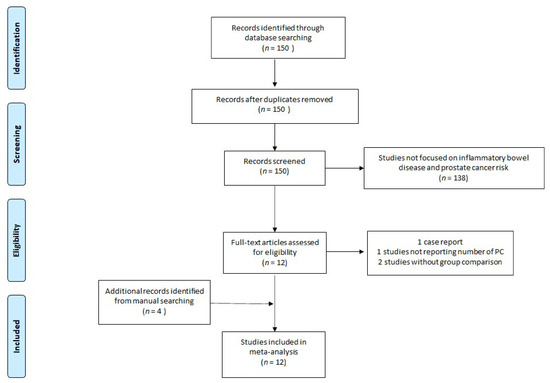