Background and objectives: Plasma arginine vasopressin (P-AVP) is regulated by the non-osmotic pathway in patients with heart failure (HF) and reduced ejection fraction. However, the regulation of P-AVP in patients with severe aortic stenosis (AS) remains unknown. Materials and Methods: Consecutive patients with severe AS who received trans-catheter aortic valve implantation (TAVI) between Apr 2016 and Apr 2019 were enrolled in this prospective study. Clinical data including P-AVP were obtained just before TAVI, and the correlation between P-AVP and other variables was investigated. Results: In total, 159 patients with severe AS (85.3 ± 4.6 years, male 26%) were enrolled. P-AVP was 1.45 ± 1.13 ng/mL and cardiac index was relatively preserved (2.76 ± 0.54 L/min/m2). There was no significant correlation between cardiac index and P-AVP (p > 0.05), whereas plasma osmolality had a moderate positive correlation with P-AVP (r = 0.35, p < 0.01), predominantly due to blood urea nitrogen (r = 0.27, p < 0.01). Patients with diuretics had significantly higher P-AVP than those without diuretics (1.65 ± 1.43 vs. 1.22 ± 0.57 pg/mL, p < 0.01). Two-year survivals free from HF readmission were statistically comparable irrespective of the level of pre-procedural P-AVP (p = 0.44). Conclusion: In patients with severe high-gradient AS who received TAVI, the P-AVP level was dominantly regulated by plasma osmolality instead of arterial underfilling. The clinical implication of elevated P-AVP in the TAVI candidates is the next concern. View Full-Text
Keywords: hemodynamics; osmolality; heart failure hemodynamics; osmolality; heart failure
►▼ Show Figures 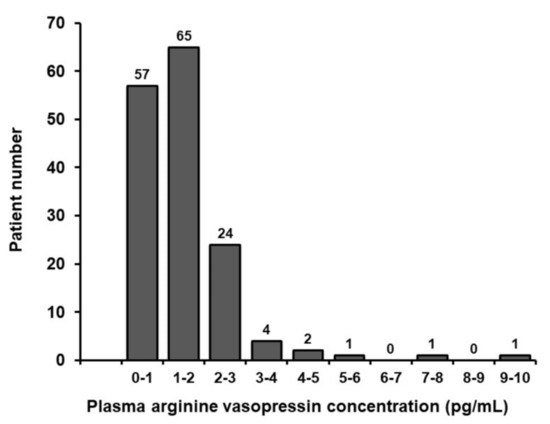