Sarcopenia is Independently Associated with an Increased Risk of Peptic Ulcer Disease: A Nationwide Population-Based Study

Background and Objective: Investigating the use of radiofrequency myolysis (RFM) for the treatment of fibroids through less invasive access by combining transvaginal ultrasound, hysteroscopy and laparoscopy. Materials and Methods: Fifty-four premenopausal women with 106 symptomatic uterine myomas. Patients underwent RFM in three ways: Vaginal Ultrasound-guided RFM (VU-RFM), Laparoscopic RFM (L-RFM) and Hysteroscopic-RFM (H-RFM). The mean patient age was 43 years; 52 symptomatic uterine myomas were subserosal, 44 intramural and 10 submucosal. The outcomes evaluated at 1 and 12 months after RFM were myoma size (volume-diameter), “Uterine Fibroid Symptom and Quality of Life (UFS-QOL)” questionnaire and a 10-point Visual Analogue Scale (VAS). The therapy was completed with a single ablation in all patients, no complication was registered. The average number of fibroids treated per intervention was two with the use of different accesses: 64/106 VU-RFMs (60.4%), 32/106 L-RFMs (30.2%) and 10/106 H-RFMs (9.4%). Results: Volume and diameter of fibroids were significantly reduced by, respectively, 51.3% and 20.1% in the first 30 days post-intervention (p < 0.001) up to a maximum of 73.5% and 37.1% after the second follow-up visit at 12 months (p < 0.001). A similar trend was shown in terms of disability with a progressive and significant reduction of symptoms (menorrhagia, dysmenorrhea, dyspareunia and pollakiuria) demonstrated by percentage variation of UFS-QOL Symptom Severity and VAS scores to −74.3% and −45.3% as well as −84.9% and −74.3%, respectively, at 1 and 12 months after RFM (p < 0.001). An overall improvement in the quality of life was also demonstrated by a significant increase in the UFS-QOL total score of +38.2% in the first 30 days post-intervention up to +44.9% after the second follow-up visit at 12 months (p < 0.001). The overall average surgery time of the RFM for each patient was 48 minutes, and the time to treat each fibroid by Vaginal Ultrasound-guided RFM (23 min) was found to be significantly less than those of laparoscopy or hysteroscopy (respectively 35 and 34 min) (p < 0.05). An electromagnetic virtual needle tracking system (VNTS) was successfully tested during the RFM procedures, and real-time contrast-enhanced ultrasound (CEUS) has proven to be effective in determining the duration of myolysis through the identification of eventual residual areas of enhancement within the fibroids. Conclusion: Radiofrequency can be considered a minimally invasive and safe procedure for the treatment of uterine myomas through the customization and possible combination of transvaginal, laparoscopic or hysteroscopic accesses. The standardization of the ablation technique with pre-intervention biopsy and new technologies such as VNTS and CEUS spares healthy uterine tissue and may change the future management of symptomatic uterine fibroids. View Full-Text
Keywords: Uterine fibroids; radiofrequency myolisis; minimally invasive surgery; ultrasonography; laparoscopy; hysteroscopy Uterine fibroids; radiofrequency myolisis; minimally invasive surgery; ultrasonography; laparoscopy; hysteroscopy
►▼ Show Figures 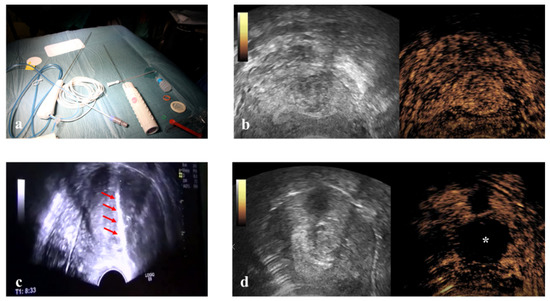