Epidemiology of Lyme Disease in a Highly Endemic European Zone

Background and objective: Lyme disease, also known as Lyme borreliosis (LB), is a tick-borne infectious disease caused by the spirochete bacteria Borrelia. The risk of infection depends on the geographical area, ecological factors, and human behavior. Clinical manifestations of Lyme borreliosis have a wide range, but the most frequent clinical symptom, which is also a diagnostic symptom, is a skin rash called erythema migrans (EM). The disease is very common worldwide. In Lithuania, the disease frequency is 99.9 cases per 100,000 population (Centre for Communicable Diseases and AIDS, Lithuania, 2017). The main aim of this study was to obtain the baseline characteristics of the disease regarding the infected Lithuanian population. Materials and Methods: We analyzed data from the Centre for Communicable Diseases and AIDS about all Lyme disease (A69.2) diagnosed patients over a three-year period (from 2014 to 2016) in Lithuania. Results: In 2014–2016, 7424 (crude incidence rate 85.4) cases with LB were diagnosed in Lithuania. Most of them (4633 (62.4%)) were identified in women. Older people were more likely to suffer from LB. Urban residents were 2.6 times more often affected that those living in villages. Tick bites were primarily observed in high season months, from May to September (90%), with the highest peak in July. There was a higher number of observed tick bites (p = 0.003) in the urban residents. Erythema migrans occurred in 75.6% LB cases, while other symptoms did not exceed a quarter of all LB cases. There were 7353 (99.6%) cases where LB was confirmed via clinical symptoms and/or laboratory tests. Also, 1720 (23.2%) patients were tested for LB immunoglobulins. Conclusions: This study found a high incidence of Lyme disease in Lithuania. We elucidated the baseline characteristics regarding the infected Lithuanian population which may ease medical clinicians’ work on new Lyme diagnoses. View Full-Text
Keywords: Lyme; borreliosis; erythema migrans; epidemiology; Lithuania; Europe Lyme; borreliosis; erythema migrans; epidemiology; Lithuania; Europe
►▼ Show Figures 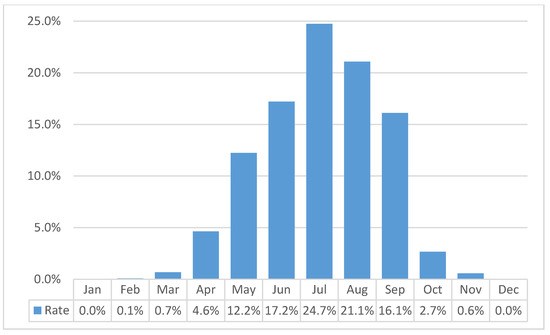