An Upfront Two-Stent Strategy for True Coronary Bifurcation Lesions with A Large Side Branch in Acute Coronary Syndrome: A Two-Year Follow-Up Study
Previous Article in Journal

Background and objectives: In Italy, Hepatitis C Virus (HCV) infections are most prevalent in people older than 50 years of age, who often experience multi-morbidities, take co-medications, and have a long history of liver disease. These characteristics could potentially affect tolerability of HCV treatments and adherence in this subgroup. After achievement of sustained virological response (SVR), retention into care is very important both to detect the onset of possible complications and prevent further infections. In this study, SVR rates and retention into care of patients treated with directly acting antivirals (DAAs) of a single-center cohort in Southern Italy were evaluated. Materials and Methods: Patients treated with directly acting antivirals from 2014 to 2018 were included. Patients were stratified by age (i.e., <65 vs. ≥65 years) and by cirrhosis presence (i.e., liver stiffness >14.6 KPa or clinical/ultrasound cirrhosis vs. absence of these criteria). Primary outcome was availability of SVR at Weeks 12–24 after the end of treatment. Inter- and intra-group comparisons were performed along the follow-up for significant laboratory parameters. Results: In total, 212 patients were treated; 184 (87%) obtained SVR after the first treatment course and 4 patients after retreatment. Twenty-two (10.4%) patients were lost to follow-up before assessment of SVR, and two patients died before the end of treatment for liver decompensation. Considering only the first treatment episode, per protocol analysis (i.e., excluding patients lost to follow-up) showed the following rates of SVR: 97% (overall), 97% (older age group), 96% (age group <65 years), 94% (cirrhotics), and 100% (non-cirrhotics). By contrast, at the intention to treat analysis (i.e., patients lost were computed as failures), SVR percentages were significantly lower for patients <65 years of age (80%) and for non-cirrhotics (85%). Conclusions: High rates of SVR were obtained. However, younger patients and those without cirrhosis displayed an apparent high risk of being lost to follow-up. This may have important implications: since those who are lost may transmit HCV in case SVR is not achieved, these subpopulations should receive appropriate counselling during treatment. View Full-Text
Keywords: HCV; DAA; real-life; HCC; outcome HCV; DAA; real-life; HCC; outcome
►▼ Show Figures 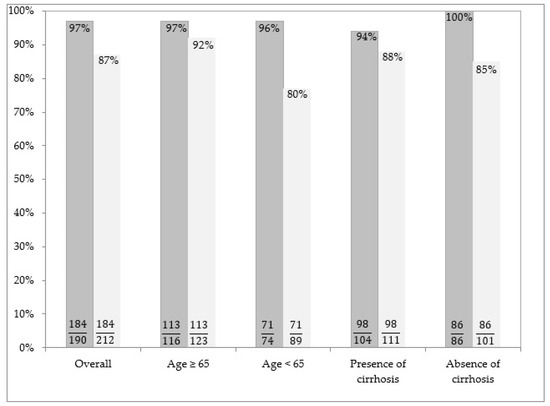