Could the Age Difference of a Single Calendar Year between Patients Undergoing IVF at 34, 35 or at 36 Years Old Affect the IVF Outcome? A Retrospective Data Analysis
Previous Article in Journal

Dietary Attitude of Adults with Type 2 Diabetes Mellitus in the Kingdom of Saudi Arabia: A Cross-Sectional Study

Background and objectives: When resecting colon adenocarcinoma, surgeons decide between the use of laparoscopically assisted and open surgery. Laparoscopic resection is known to have short-term benefits over an open operation. However, researchers are not as unified about the long-term findings. The aim of this research is to elaborate on five-year post-operative differences in survival and cancer recurrence between these two different approaches. Materials and methods: 74 enrolled patients were evaluated five years after a primary operation. We collected dates of deaths of deceased patients and time after operation of possible recurrences. Carcinoma staging was done by a pathologist after operation. Blood samples were taken before surgery in order to measure tumor markers (CA19-9 and CEA). Results: Survival after colonic adenocarcinoma surgery did not differ between the two different surgical approaches (p = 0.151). Recurrence of cancer was not associated with the type of operation (p = 0.532). Patients with recurrence had a 37.6 times greater hazard ratio of dying (95% CI: [12.0, 118]; p < 0.001). Advanced age adversely affected survival: patients aged <65 and ≥65 years had a 97%, and 57% survival rate, respectively. Patients with elevated tumor markers at operation had a 19.1 greater hazard ratio of dying (95% CI: [5.16, 70.4]; p < 0.001). Patients with different TNM stages did not have any statistically significant differences in survival (HRII = 2.49; 95% CI: [0.67, 9.30]; pII = 0.173) (HRIII = 2.18; 95% CI: [0.58, 8.12]; pIII = 0.246) or recurrence (p = 0.097). Conclusion: The obtained results suggest that laparoscopic resection of colon cancer is not inferior from an oncologic point of view and results in a similar long-term survival and disease-free interval. Recurrence of carcinoma, older age at initial operation and elevated tumor markers, above a pre-set threshold at operation, were found to be independent factors of lower survival. We believe that the obtained results will be of benefit when choosing treatment for colon adenocarcinoma. View Full-Text
Keywords: colon cancer; survival; recurrence; surgery; laparoscopy colon cancer; survival; recurrence; surgery; laparoscopy
►▼ Show Figures 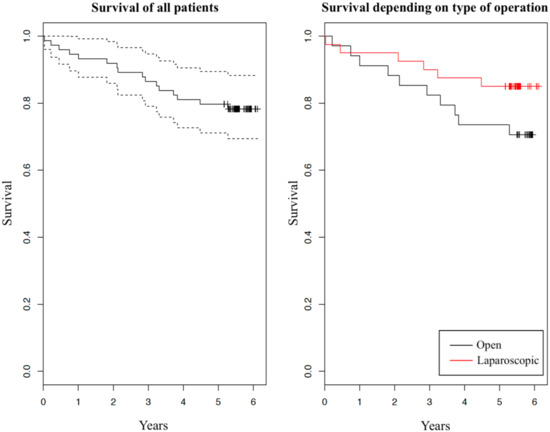