Background and Objectives: Significant numbers of prostate cancer (PCa) patients experience tumour upgrading and upstaging between prostate biopsy and radical prostatectomy (RP) specimens. The aim of our study was to investigate the role of grade and stage increase on surgical and oncological outcomes. Materials and Methods: Upgrading and upstaging rates were analysed in 676 treatment-naïve PCa patients who underwent RP with subsequent follow-up. Positive surgical margin (PSM), biochemical recurrence (BCR), metastasis-free survival (MFS), overall (OS) and cancer specific survival (CSS) were analysed according to upgrading and upstaging. Results: Upgrading was observed in 29% and upstaging in 22% of PCa patients. Patients undergoing upgrading or upstaging were 1.5 times more likely to have a PSM on RP pathology. Both upgrading and upstaging were associated with increased risk for BCR: 1.8 and 2.1 times, respectively. Mean time to BCR after RP was 2.1 years in upgraded cases and 2.7 years in patients with no upgrading (p < 0.001), while mean time to BCR was 1.9 years in upstaged and 2.8 years in non-upstaged cases (p < 0.001). Grade and stage increase after RP were associated with inferior MFS rates and ten-year CSS: 89% vs. 98% for upgrading (p = 0.039) and 87% vs. 98% for upstaging (p = 0.008). Conclusions: Currently used risk stratification models are associated with substantial misdiagnosis. Pathological upgrading and upstaging have been associated with inferior surgical results, substantial higher risk of BCR and inferior rates of important oncological outcomes, which should be considered when counselling PCa patients at the time of diagnosis or after definitive therapy. View Full-Text
Keywords: prostate cancer; upgrading; upstaging; biochemical recurrence; metastases; survival prostate cancer; upgrading; upstaging; biochemical recurrence; metastases; survival
►▼ Show Figures 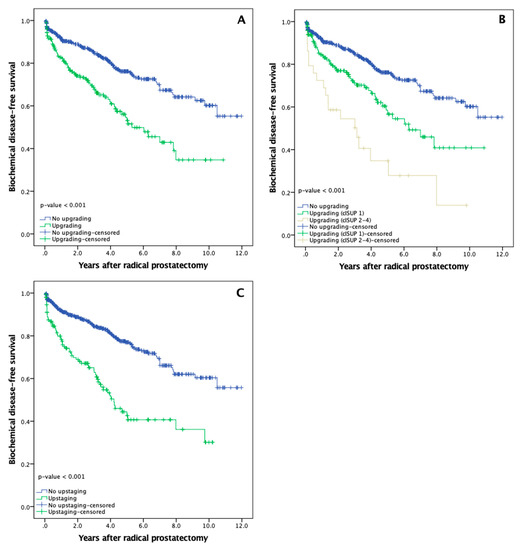