Rheumatoid arthritis (RA) is a common inflammatory arthritis, affecting 0.5–1% of the general population worldwide. Patients with RA are often treated with conventional synthetic disease-modifying anti-rheumatic drugs (csDMARDs) or biologic DMARDs, putting them in a relatively immunocompromised status.
RA patients are at increased risk of infection, but infection is difficult to identify in RA because infection and inflammation can appear very similar. Moreover, it is critical for rheumatologists to differentiate the process of infection or inflammation in a timely fashion, especially when they are presented with toxic signs and high inflammatory markers in order to use antibiotic prescription or escalation of immunosuppressive treatment. Thus, the development of an accurate diagnostic tool is imperative to aid clinicians to promptly make critical decisions.
During the past 20 years, many studies have been conducted in critical illness settings, suggesting that serum procalcitonin (PCT) is a specific marker for detection of bacterial infection [1,2,3]. Studies have proven the use of PCT in clinical settings, particularly in initiating or discontinuing antibiotic therapy, and to monitor the response of treatment during bacterial infection [4,5,6].
Previous studies have evaluated PCT application among autoimmune and autoinflammatory diseases, and have shown good sensitivity and specificity for the diagnosis of systemic bacterial infection [7,8]. A few studies have investigated PCT in patients with RA. Sato et al. conducted a study in 118 RA patients, revealing that PCT had a high specificity (98.2%) in predicting infection process, but the sensitivity (25.8%) was low [9]. Among these patients with RA, 18 patients did not suffer from active infection [9]. Schwenger et al. showed that the PCT levels were below 0.5 ng/mL in 14 patients with active RA [10]. Whether the serum levels of PCT in patients with RA without infection could be elevated due to the inflammatory nature of the disease itself compared with controls is not yet clear. In addition, the correlation of serum PCT levels and RA disease activities with different treatments in patients with RA is still unknown. We hypothesized that patients with RA would have elevated serum PCT levels due to the inflammatory nature of the RA itself. Thus, the aim of this study was to investigate the serum PCT levels among patients with RA, but without active infection compared with the controls, and to evaluate the relationship of PCT with RA disease activity, and treatment received by patients.

All participants signed informed consent under a study protocol approved by the institutional review board of Dalin Tzu Chi Hospital, Buddhist Tzu Chi Medical Foundation (No. B10604003, 20 November 2017). The study was carried out in accordance with the Declaration of Helsinki. The blood sample was collected together in our earlier study [11]. In brief, patients aged 20 years and above, with clinician-confirmed diagnosis of RA based on the 2010 American College of Rheumatology (ACR)/European League Against Rheumatism (EULAR) criteria were included during regular outpatient visit. Control group was obtained from healthy volunteers who did not have active or major and uncontrolled chronic medical conditions evaluated by a physician. Patients with RA and controls who had active infection symptoms and signs were excluded from the study. Data were ascertained by laboratory measurements and medical records. RA disease activity was measured using DAS28-ESR. Patients receiving csDMARDs, including glucocorticoid, hydroxychloroquine, methotrexate, sulfasalazine, and leflunomide were considered as the non-biologic group, whereas those receiving etanercept, adalimumab, golimumab, abatacept, tocilizumab, tofacitinib, and rituximab were considered as the biologic group. Since the infection symptoms and signs of the patients with RA could be masked by the use of immunosuppressive drugs, medical chart review was performed and patients with active infection within one week after enrollment were excluded.

Data were presented as mean with standard deviation or median with interquartile range, as appropriate. Student’s t-test or Mann–Whitney U test was used for the comparison of normally or non-normally distributed variables, respectively. Chi-square test was used for the comparison of categorical variables. As PCT was not normally distributed, we rank transformed the values of PCT and then used the ranks as the dependent variable in conventional simple and multiple linear regression analysis to determine the associations of PCT with different clinical parameters in patients with RA. All statistical analyses were performed using IBM SPSS, version 24.0 (IBM Corp, Armonk, NY, USA). A value of p < 0.05 was considered statistically significant.

Our study showed that patients with RA had significantly elevated serum PCT levels compared with the controls. PCT—a 116-amino acid peptide and the pre-hormone of calcitonin, firstly discovered in 1975—is normally secreted by the C cells of the thyroid in response to hypercalcemia, and has no known hormonal activity [4,9,12]. It has a half-life of 22 to 35 h (4). Patients without infection and inflammation usually have low serum PCT concentrations (<0.05 ng/mL), as all the PCT formed in C cells is converted into calcitonin [13]. In response to severe inflammation, particularly bacterial infection, PCT is released into the circulation [5]. A plasma level of ≥0.5 ng/mL is interpreted as abnormal, and indicates a diagnosis of sepsis [2,5,6]. Although it is secreted in thyroid C-cells under normal circumstances, a previous study showed that increased PCT release during severe inflammation even in thyroidectomy patients, suggesting that the production of PCT during inflammation must be outside of the thyroid glands [4].
Our study recruited a relatively large number of participants, including 201 non-biologics RA patients and 422 biologics RA patients, and revealed a significantly higher level of PCT among patients with RA when compared with healthy controls. We were surprised to find that RA patients using biologics or higher disease activity had lower serum levels of PCT, and further studies are needed to explain this association. Among them, nine RA patients were found to have a PCT level higher than 0.05 ng/mL. None were in an active infection state based on a physician’s evaluation and examination of subsequent medical records. Two were under hemodialysis, two patients had chronic obstructive pulmonary disease, two patients had chronic hepatitis, and the rest were free of comorbidities or infection. It is worth mentioning that, before using PCT level to distinguish infection and inflammation process, further studies are warranted to find out the optimal cutoff value in predicting infection process among patients with RA.
Elevated PCT levels provided a good diagnostic tool for detection systemic infection in patients with systemic autoimmune diseases [14]. Our study found that slightly but significantly elevated PCT levels in patients with RA compared to the controls. Different cutoff point of PCT had been suggested in different conditions of various infection [15]. Thus, patients with RA might need a different cutoff point of PCT in predicting an active infection process.
There are a few limitations in our study. First, we did not have the PCT levels of RA patients with an active infection process. However, during medical chart review, two of our patients with RA were excluded due to active infection within one week of enrollment, and their serum PCT levels were markedly elevated (>0.5 ng/mL). Secondly, controls and especially patients with RA might have mild infection that did not detect during enrollment by the physician. Finally, the results of CRP, ESR, and comorbidities of the heathy controls were not available.

K.-J.N. and M.-C.L. conceived and designed the study. H.-C.Y. and H.-Y.H.T. performed the experiment. C.-W.H., K.-J.N. and M.-C.L. analyzed and interpreted the data. K.-J.N. wrote the paper. All authors revised the manuscript critically for the important intellectual content. All authors have read and agreed to the published version of the manuscript. 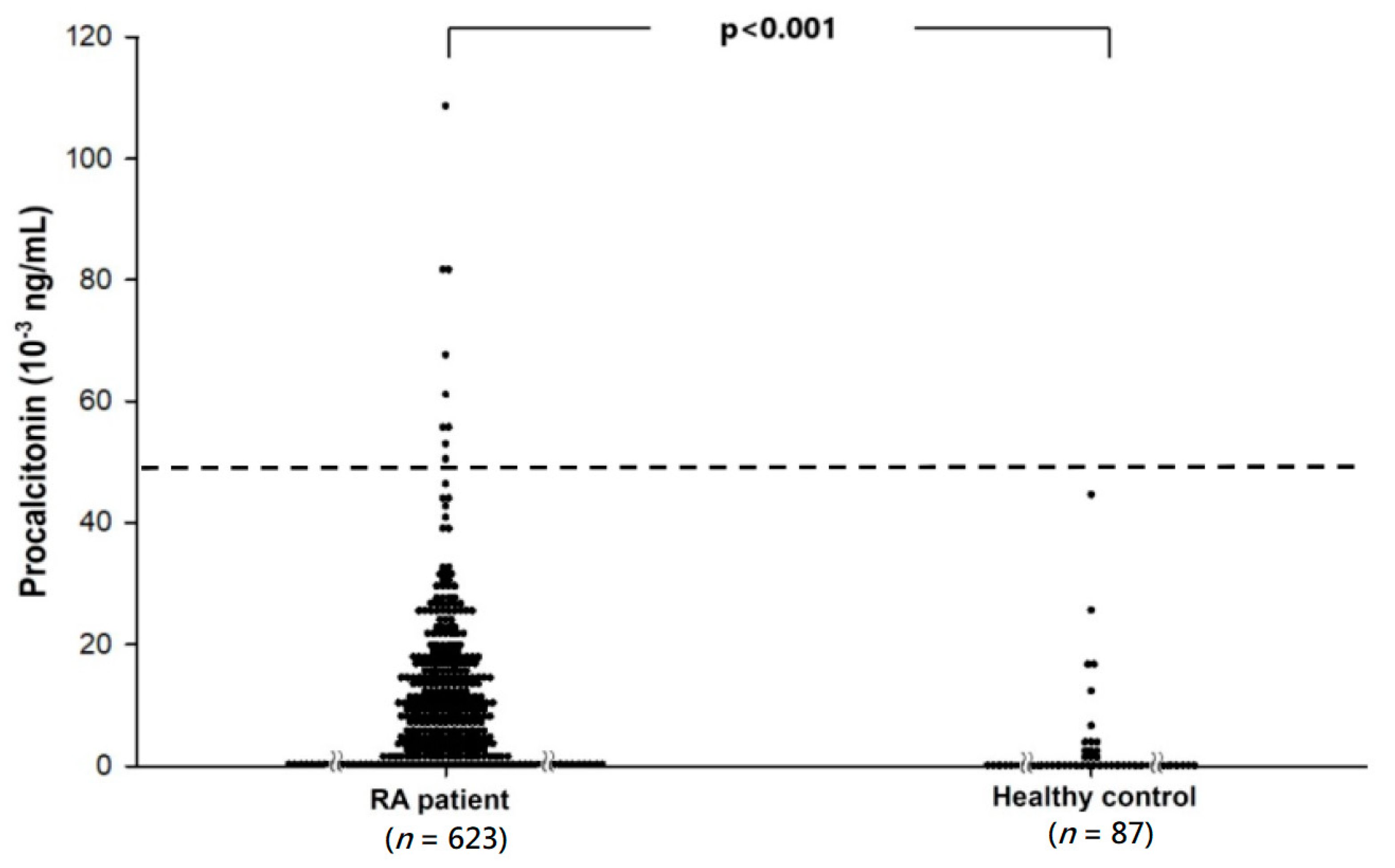