Predictive Value of HPV, p53, and p16 in the Post-Treatment Evolution of Malignant Tumors of the Oropharynx and Retromolar Trigone–Oropharynx Junction
Previous Article in Special Issue

Background and objectives: Heat-related illness (HRI) can have significant morbidity and mortality consequences. Research has predominately focused on HRI in the emergency department, yet health care leading up to hospital arrival can impact patient outcomes. Therefore, the purpose of this study was to describe HRI in the prehospital setting. Materials and Methods: A descriptive epidemiological design was utilized using data from the National Emergency Medical Services (EMS) Information System for the 2017–2018 calendar years. Variables of interest in this study were: patient demographics (age, gender, race), US census division, urbanicity, dispatch timestamp, incident disposition, primary provider impression, and regional temperatures. Results: There were 34,814 HRIs reported. The majority of patients were white (n = 10,878, 55.6%), males (n = 21,818, 62.7%), and in the 25 to 64 age group (n = 18,489, 53.1%). Most HRIs occurred in the South Atlantic US census division (n = 11,732, 33.7%), during the summer (n = 23,873, 68.6%), and in urban areas (n = 27,541, 83.5%). The hottest regions were East South Central, West South Central, and South Atlantic, with peak summer temperatures in excess of 30.0 °C. In the spring and summer, most regions had near normal temperatures within 0.5 °C of the long-term mean. EMS dispatch was called for an HRI predominately between the hours of 11:00 a.m.–6:59 p.m. (n = 26,344, 75.7%), with the majority (27,601, 79.3%) of HRIs considered heat exhaustion and requiring the patient to be treated and transported (n = 24,531, 70.5%). Conclusions: All age groups experienced HRI but particularly those 25 to 64 years old. Targeted education to increase public awareness of HRI in this age group may be needed. Region temperature most likely explains why certain divisions of the US have higher HRI frequency. Afternoons in the summer are when EMS agencies should be prepared for HRI activations. EMS units in high HRI frequency US divisions may need to carry additional treatment interventions for all HRI types. View Full-Text
Keywords: heat stroke; heat exhaustion; environmental conditions heat stroke; heat exhaustion; environmental conditions
►▼ Show Figures 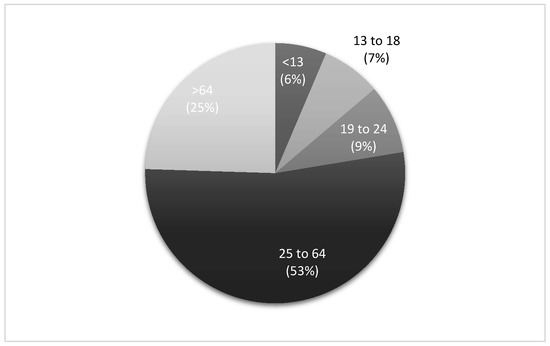