A possible cause of hypophosphatemia is paraneoplastic secretion of fibroblast growth factor 23 (FGF-23). Tumors secreting FGF-23 are rare, mostly of mesenchymal origin, usually benign, and may be located anywhere in the body, including hands and feet, which are often not represented in conventional imaging. A 50-year-old woman presented with diffuse musculoskeletal pain and several fractures. Secondary causes of osteoporosis were excluded. Laboratory analysis revealed hypophosphatemia and elevated alkaline phosphatase, parathyroid hormone, and FGF-23. Thus, oncogenic osteomalacia due to neoplastic FGF-23 secretion was suspected. FDG-PET-CT and DOTATATE-PET-CT imaging demonstrated no tumor. Cranial MRI revealed a tumorous mass in the left cellulae ethmoidales. The tumor was resected and histopathological examination showed a cell-rich tumor with round to ovoid nuclei, sparse cytoplasm, and sparse matrix, resembling an olfactory neuroblastoma. Immunohistochemical analysis first led to diagnosis of olfactory neuroblastoma, which was later revised to phosphaturic mesenchymal tumor. Following the resection, FGF-23 and phosphate levels normalized. In conclusion, we here describe a patient with an FGF-23-secreting phosphaturic mesenchymal tumor with an unusual morphology. Furthermore, we emphasize diagnostic pitfalls when dealing with FGF-23-induced hypophosphatemia. View Full-Text
Keywords: FGF-23; phosphaturic mesenchymal tumor; PMT; hypophosphatemia FGF-23; phosphaturic mesenchymal tumor; PMT; hypophosphatemia
►▼ Show Figures 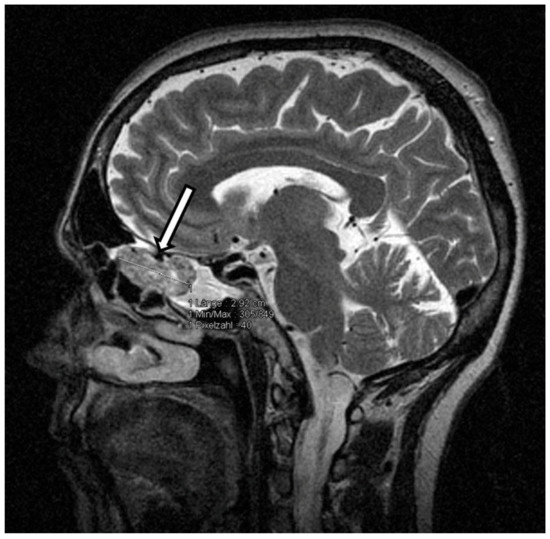