Effectiveness of Low-Level Laser Therapy with a 915 Nm Wavelength Diode Laser on the Healing of Intraoral Mucosal Wound: An Animal Study and a Double-Blind Randomized Clinical Trial

Background and objectives: Diode laser has been the most popular low-level laser therapy (LLLT) technique in dentistry due to its good tissue penetration, lower financial costs, small size for portable application, and convenience to use. A series of recent studies with 940 nm or 980 nm lasers demonstrated that LLLT showed positive effects after third molar extraction or periodontal flap surgery. However, the effects of LLLT on intraoral mucosal wound healing after surgical incision have not yet been determined in human clinical study. Materials and Methods: The present study was performed to determine the efficacy and safety of 915 nm wavelength low-level laser therapy (LLLT) in mucosal wound healing. A total of 108 Sprague–Dawley rats were used. They were divided into three groups: Abrasive wound group, immediate LLLT once group, and daily LLLT group. As a clinical study, a total of 16 patients with split-mouth design subjected to bilateral mandibular third molar extraction were allocated into the LLLT group and placebo group. The process of LLLT was performed on postoperative days 0, 1, and 7, and parameters related to wound healing were analyzed on days 1, 7, and 14. Results: Repeated laser irradiation promoted mucosal wound healing of the rats. In the clinical study, although there were no significant statistical differences between the LLLT and placebo groups in all inflammatory parameters, the early stage mucosal healing tendency of wound dehiscence was higher in the LLLT group than in the placebo group clinically on postoperative day 1. Conclusions: The present results showed that 915 nm LLLT could be applied safely as an auxiliary therapy for mucosal wound healing. View Full-Text
Keywords: laser dentistry; low-level laser therapy; 915 mm diode laser; mucosal wound healing laser dentistry; low-level laser therapy; 915 mm diode laser; mucosal wound healing
►▼ Show Figures 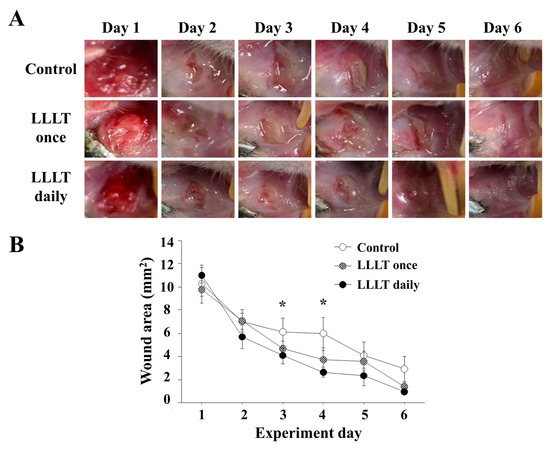