What Makes Bariatric Operations Difficult–Results of a National Survey

Background and objective: The most commonly performed bariatric procedures include laparoscopic sleeve gastrectomy (LSG), laparoscopic Roux-en-Y gastric bypass (LRYGB), and one anastomosis gastric bypass-mini gastric bypass (OAGB-MGB). A study comparing the degree of difficulty among those procedures could serve as a guide for decision making in bariatric surgery and further improve training programs for general surgery trainees. The aim of this study was to compare the subjective level of technical difficulty of LSG, LRYGB, and OAGB–MGB as perceived by surgeons and surgical residents. Materials and Methods: An anonymous internet-based survey was designed to evaluate the subjective opinions of surgeons and surgical residents in training in Poland. It covered baseline characteristics of the participants, difficulty of LSG, OAGB-MGB, LRYGB and particular stages of each operation assessed on a 1–5 scale. Results: Overall, 70 surgeons and residents participated in our survey. The mean difficulty degree of LSG was 2.34 ± 0.89. The reinforcing staple line with sutures was considered most difficult stage of this operation (3.17 ± 1.19). The LRYGB operation had an average difficulty level of 3.87 ± 1.04. Creation of the gastrojejunostomy was considered the most difficult stage of LRYGB with a mean difficulty level (3.68 ± 1.16). Responders to our survey assessed the mean degree of difficulty of OAGB-MGB as 2.34 ± 0.97. According to participating surgeons, creating the gastrojejunostomy is the most difficult phase of this operation (3.68 ± 1.16). Conclusion: The LSG is perceived by surgeons as a relatively easy operation. The LRYGB was considered to be the most technically challenging procedure in our survey. Operative stages, which require intra-abdominal suturing with laparoscopic instruments, seem to be the most difficult phases of each operation. View Full-Text
Keywords: bariatric surgery; sleeve gastrectomy; Roux-en-Y gastric bypass; one-anastomosis gastric bypass; technical difficulties bariatric surgery; sleeve gastrectomy; Roux-en-Y gastric bypass; one-anastomosis gastric bypass; technical difficulties
►▼ Show Figures 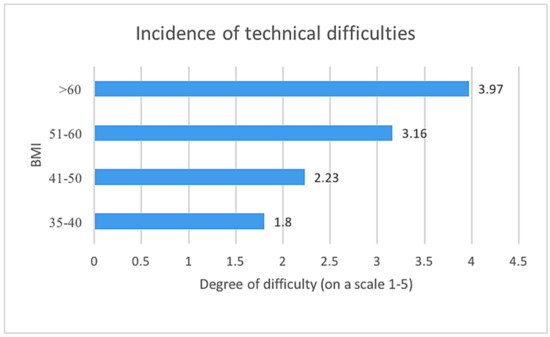