Background and Objectives: The potent, endothelium-independent, vasorelaxant effect of ethyl rosmarinate, an ester derivative of rosmarinic acid, makes it of interest as an alternative therapeutic agent for use in hypertension. This study was designed to investigate the effect of ethyl rosmarinate on Nω-nitro-L-arginine methyl ester (L-NAME)-induced hypertensive rats. Materials and Methods: L-NAME was given orally to male Wistar rats for 6 weeks to induce hypertension concurrently with treatment of ethyl rosmarinate at 5, 15, or 30 mg/kgor enalapril at 10 mg/kg Systolic blood pressure (SBP), heart rate, and body weight of all experimental groups were recorded weekly, while the vascular sensitivity and histological changes of the aorta were evaluated at the end of the experiment. Results: For all treatment groups, the data indicated that ethyl rosmarinate significantly attenuated the SBP in hypertensive rats induced by L-NAME, with no significant differences in heart rate and body weight. In addition, the response of vascular sensitivity to acetylcholine (ACh) was improved but there was no significant difference in the response to sodium nitroprusside (SNP). Furthermore, the sensitivity of the aorta to phenylephrine (PE) was significantly decreased. The thickness of the aortic wall did not differ between groups but the expression of endothelial nitric oxide synthase (eNOS) was increased in ethyl rosmarinate- and enalapril-treated groups compared with the hypertensive group. Conclusions: Ethyl rosmarinate is an interesting candidate as an alternative treatment for hypertension due to its ability to improve vascular function and to increase the expression of eNOS similar to enalapril which is a drug commonly used in hypertension. View Full-Text
Keywords: hypertension; vascular function; ethyl rosmarinate; endothelial dysfunction hypertension; vascular function; ethyl rosmarinate; endothelial dysfunction
►▼ Show Figures 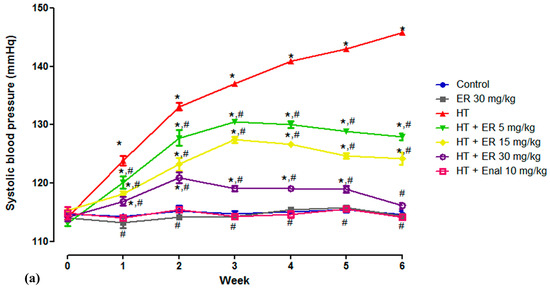