Chlorhexidine (CHX) is now recognized as the main chemical agent for controlling and preventing biofilm and inhibiting gingivitis [1,2]. Chlorhexidine is a cationic bisbiguanide with a mode of action based on breaking down the cytoplasmic membrane of microorganisms by disturbing their osmotic balance, causing precipitation of the cell contents. It is a wide-spectrum antibacterial agent which is bacteriostatic at low concentrations and bactericidal at high concentrations [1,2]. The risk of resistance of oral bacteria to chlorhexidine and potential mechanisms conferring this resistance or even cross-resistance to the antibiotic is little known. Moreover, there is also little awareness about the risk of chlorhexidine resistance among the dental community even though chlorhexidine has been widely used in dental practice as the gold-standard antiseptic [3,4].
The role of chlorhexidine as a synthetic protease inhibitor was evaluated in the study by Carrilho et al., 2007 [5]. The ability of chlorhexidine to dose-dependently inhibit the collagenolytic activity of metalloproteinases 2 and 8 and cysteine cathepsins present in the human dentin–pulp complex or in inflammatory diseases, such as periodontitis, has been described [5,6,7].
Metalloproteinases (MMPs) are present within the human dentin matrix and are involved in dentinogenesis and in caries progression mechanisms. Human dentin matrices exhibit collagenolytic and gelatinolytic activity when prepared with acid and bonding agents. This event is responsible for the disruption of collagen fibrils. The incomplete infiltration of these fibrils into the hybrid layers of the resin–dentin bond leads to bond break down over time [8].
Four types of MMPs have been identified in dentin: MMP-2, MMP-9 (gelatinases), MMP-8 (collagenases), and MMP-20 (enamelysin) [4]. MMP-2 predominates over the rest [9]. MMPs in the dentin are activated by acids produced by cariogenic bacteria, causing destruction of the collagen matrix in carious processes. In addition, acid etching prior to the placement of a restoration is also capable of breaking the collagen matrix by activating the MMPs in the dentin that are slowly released over time [4,10,11].
Chlorhexidine inhibits the action of MMP-2 and MMP-9 by a chelating mechanism, whereas in the case of MMP-8, chlorhexidine may interact with the essential sulfhydryl and/or cysteine groups present in the active site of MMPs [8].
The longevity of dental restorations depends on the bond between the restoration and the tooth. This union is a hybrid layer formed by a mixture of collagen, resin, residual water, and hydroxyapatite crystallites generated when the resin penetrates into the intertubular dentin and the dentin tubules [12]. The formation of this hybridized layer is not enough to guarantee the stability of the layer over time [12,13].
In order to maintain the stability of the hybrid layer, chlorhexidine can be applied. Chlorhexidine has a high substantivity due to the release of positively charged molecules on the treated surfaces. The demineralized fibrils of dentinal collagen can be united in a very short period of time (15–60 s), this being enough to guarantee long-term bonding [14,15].
No side effects have been described for chlorhexidine (such as brown staining or unpleasant taste alteration) in short-term applications. Therefore, chlorhexidine would not have any negative effect when used in the adhesion process [16].
Carrilho observed that application of an aqueous CHX solution after acid-etching resulted in stable resin–dentin bonds after approximately 14 months [5]. Some clinicians apply 2% CHX for 60 s to acid-etched dentin during resin bonding in an attempt to increase the durability of resin–dentin bonds by inhibiting endogenous MMPs in the dentin matrix. This method is easy to adopt, and will likely be the first to gain wider acceptance.
Bond strength testing of adhesive systems is considered a reliable predictor of the longevity of dental restorations. Bond strength can be measured by different types of testing methods. Microtensile bond tests provide many advantages over the shear tests, such as better control of regional differences, better economic use of teeth, and better stress distribution at the true interface. The drawbacks include difficulty in measuring bond strengths lower than 5 MPa, difficulty in fabricating specimens with consistent geometry, and easy damage of specimens [17].
The aim of the study was to analyze the available evidence on the effect of 2% chlorhexidine after acid etching on the microtensile bond strength resistance of resin restorations over time: immediately, at 24 h, at 6 months, at 12 months, between 2–5 years, and in aged or thermally cycled restorations.
The research (PICO) question was: do resin restorations pretreated with 2% chlorhexidine after etching have greater long-term microtensile bond strength stability compared to their untreated counterparts?

This study consisted of systematically reviewing published studies that addressed the effect of chlorhexidine on the microtensile bond strength in resin restorations.

The criteria for inclusion accepted all articles that met the following requirements:
The exclusion criteria were:

The quality of the articles included in the review was assessed on the Jadad scale, which is used to evaluate the methodological quality of experimental studies. The scale is composed of 5 items which assess the biases related to randomization, double-blinding, withdrawals and dropouts, appropriate randomization, and appropriate blinding. The score can range from 0–5 points. A score of 5 points is considered to be of high quality. An article that scores less than 3 points is considered to be of poor quality.

Two reviewers independently assessed the articles. In the event of disagreement, they reached a consensus, but if they continued to disagree they consulted a third reviewer.
The following data items were recorded for each article:

2.6. Statistical Analysis of the Data

The publication bias was assessed by a funnel plot. The x-axis reflects the effect of the treatment, in this case the differences in means, and the y-axis represents the degree of confidence in the results of the studies, in this case represented by the standard error. Under the random effects model and using the "trim-and-fill" method, which is able to impute new studies to obtain a symmetry in the funnel plot, the difference in means was estimated and compared with that obtained previously in the overall meta-analysis.
The publication bias was also assessed through the classic fail-safe number and Egger’s regression intercept. The classic fail-safe number is interpreted as the number of non-significant studies that would need to be included in the meta-analysis in order for the significant p-value resulting from the calculation to cease to be significant. In the absence of publication bias, the Egger’s regression intercept has a 95% CI that includes 0 and a p-value > 0.

The search identified 449 articles in MEDLINE, 289 in Embase, 439 in Scopus, and 3 through manual search. Duplicate references were excluded. After screening by title and abstract and reading the full text, 21 were included in the qualitative synthesis and finally 18 in the quantitative synthesis (meta-analysis) because the articles did not present data available or could not be combined because the standard deviation was missing (Figure 1). Table 1 presents the data extracted from the selected articles. All the studies, when evaluated by the Jadad quality scale, presented medium-low scores (Table 2).

The overall meta-analysis included 18 studies with 44 rows, because there were various subgroups in the same study. This meta-analysis studied the microtensile bond strength, irrespective of follow-up time (Figure 2). The bond strength of the experimental group—the one treated with chlorhexidine—was 3.49 MPa (95% CI 2.26–4.72) greater than that of the control group. The meta-analysis did show significance (Z-value = 5.58; p = 0.000). The Q-test value was 468.2, with p = 0.000, and the I2 score was 90.8%, so it was considered highly heterogeneous. To analyze the influence of time on the microtensile bond strength, the studies were grouped based on the follow-up times.

3.6. Meta-Analysis by Follow-Up Time: From 2–5 Years, Aged, or Thermocycling

This meta-analysis included 7 studies (Figure 7). The aged subgroup was unified with the thermocycling subgroup, because in spite of the different nomenclatures chosen by each author in their article, both corresponded to the same process. This consisted of thermocycling accompanied by an increase in temperature, thus producing an aged specimen to be studied. The Q-test value was 50.7 (p = 0.000) and the I2 score was 88.1%. Like all the previous meta-analyses, these data presented heterogeneity. In this model, the difference in means was 9.08 MPa (95% CI 5.36–12.81) and presented statistical significance (Z-value = 4.78; p-value = 0.000). So, it may be stated that from 6 months onward, the microtensile bond strength of the chlorhexidine group was greater than that of the control group.

The funnel plot (Figure 10) was quite symmetrical, showing studies with a high standard error and others with a low standard error. When the trim-and-fill method was used under the random effects model, the point estimated (black rhombus in Figure 10) remained unchanged with respect to the estimated point in the overall meta-analysis. The classic fail-safe number calculated 2560 as the number of studies that would be needed for the p-value to cease to be significant. The Egger’s recession intercept was 0.291, 95% CI −1.08 to –1.66 with a p-value of 0.436. For all these studies, the presence of a publication bias was not detected.

Applying a 2% chlorhexidine solution after acid etching increased the microtensile bond strength. This effect was time-dependent, as it only proved significant in follow-up times of 6 months or more. The effect of chlorhexidine on the microtensile bond strength was not influenced by the type of adhesive. The results of the present study were based on in-vitro studies and they would not necessarily apply to in vivo conditions.

T.H.-N., J.M.M.-C., and V.G.-S. contributed to the design and planning of the study, data collection, statistical analysis, interpretation of the statistical analysis, and critical revision of the manuscript. C.B.-A., V.P.-G., J.M.A.-S and A.P.-M. contributed to the design, planning, and critical revision of the manuscript. All the authors approved the final version and agreed on all aspects of the work. 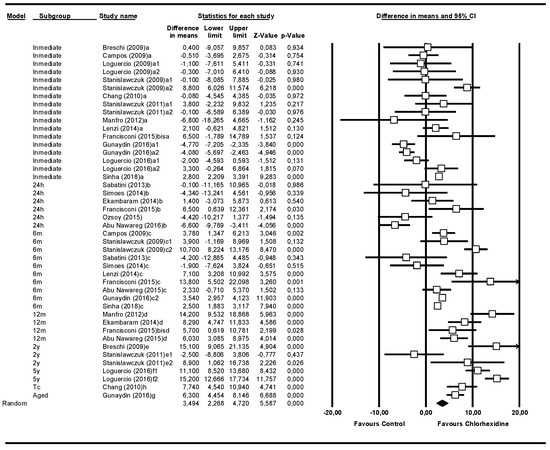 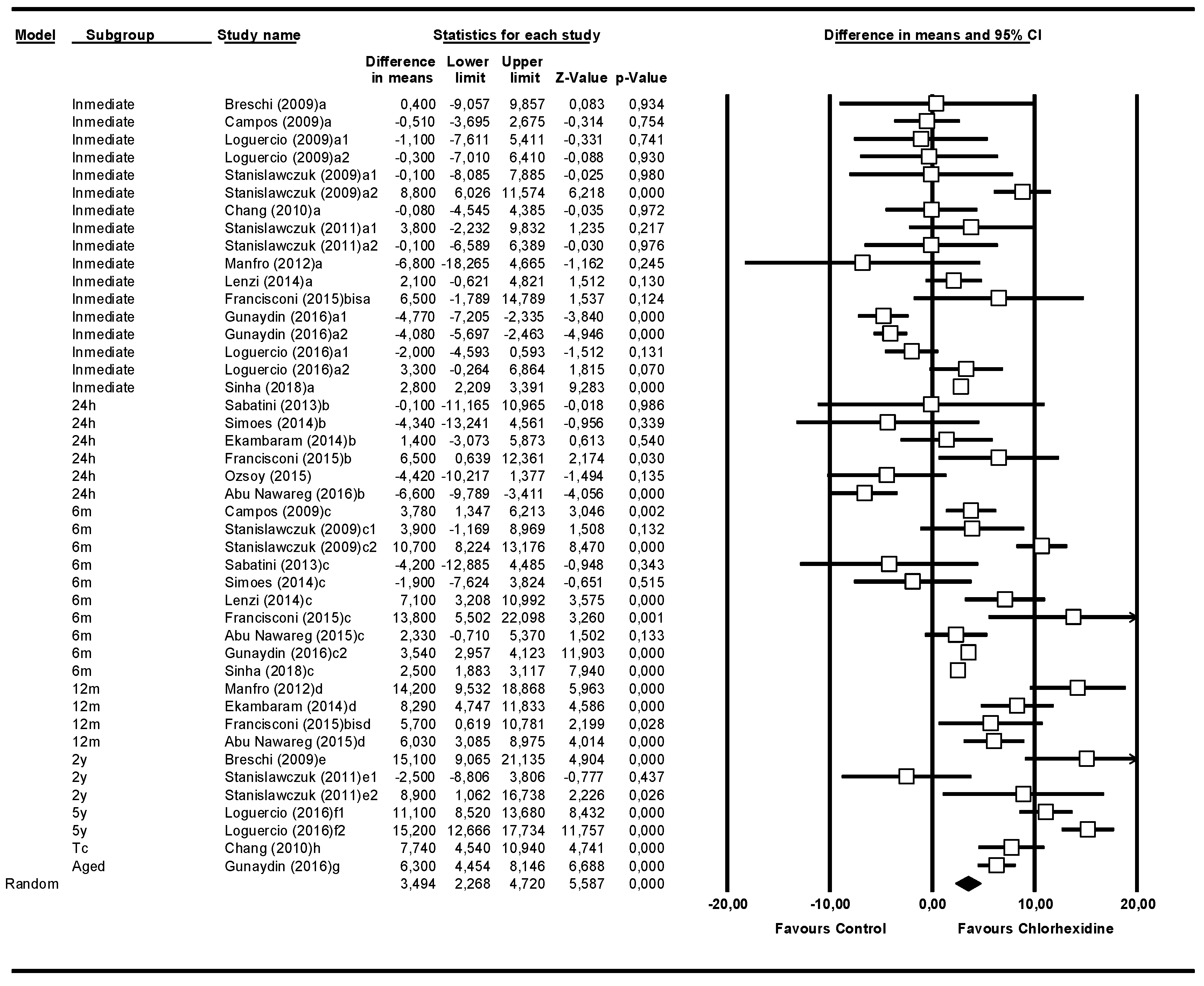 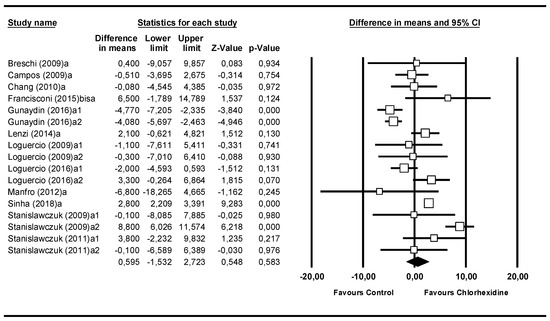 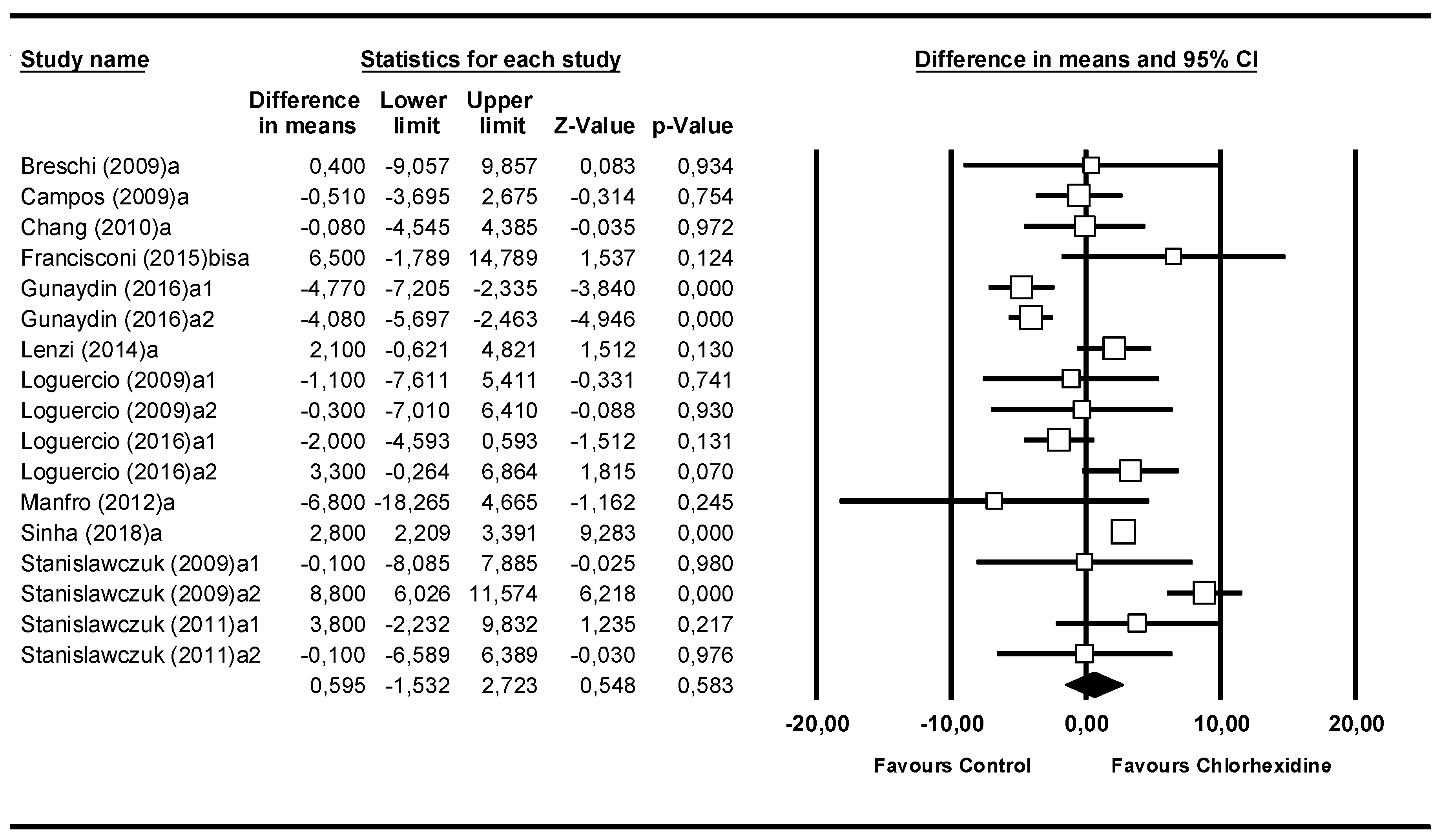 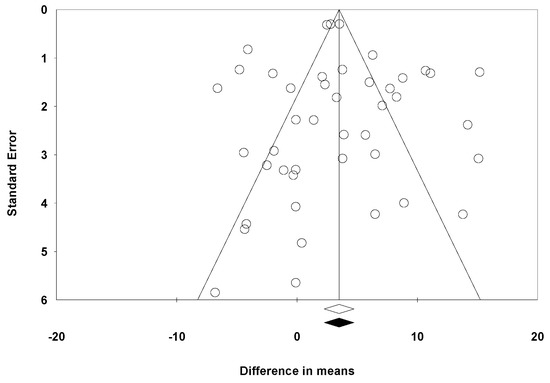