The Role of Cardiovascular and Metabolic Comorbidities in the Link between Atrial Fibrillation and Cognitive Impairment: An Appraisal of Current Scientific Evidence

Transitional cell carcinoma (TCC), also called urothelial carcinoma, is the most common type of genitourinary cancer. Common risk factors include cigarette smoking and chemical exposure. Worldwide, the annual incidence rates are approximately 9.0 and 2.2 per 100,000 persons for men and women, respectively; the annual mortality rates are reported to be 3.2 and 0.9 per 100,000 persons for men and women, respectively [1]. However, the incidence and mortality rates of bladder cancer vary across countries. For instance, in Taiwan, higher incidence of bladder cancer was found in black-foot disease endemic areas [2]. The recommendations on the clinical management of bladder cancer is based on its muscle invasiveness, classified as non-muscle-invasive or muscle-invasive bladder cancer. Approximately 75% of patients with newly diagnosed bladder cancer present with non-muscle-invasive disease and undergo transurethral resection of the bladder followed by adjuvant therapy, such as intravesical chemotherapy or bacillus Calmette–Guérin (BCG) immunotherapy, to reduce the risk of disease recurrence or progression [1]. In patients with muscle-invasive disease or disease progression, treatment options include radical cystectomy and neoadjuvant chemotherapy, but as patients potentially progressed to metastatic status, the survival rate drops [3]. The efficacy of chemotherapy may be limited by drug toxicity, resistance, and adverse effects, and so novel therapeutic strategies that enhance treatment efficacy or increase sensitivity to drugs are of high clinical importance.
Epigallocatechin gallate (EGCG) is a major bioactive polyphenolic compound found in green tea leaves, and the effect of EGCG and their synthetic analogs have been reported as potential anti-cancer agents in various cancer types through modulating and regulating multiple signaling pathways [4]. Regarding the potential effects of EGCG on the urinary tract system, flavonoid antioxidants including EGCG were reported to ameliorate cyclophosphamide-induced cystitis [5]. In addition, Bazi et al. claimed the protective effect of EGCG against bladder degeneration in rats [6], and the antioxidant effect against H2O2-induced oxidative stress through superoxide was observed in normal and malignant bladder cells [7]. In bladder cancer, EGCG inhibits proliferation and migration, and induces apoptosis of bladder cancer cells [8,9], and it also exerts cytotoxic effect and prevents intravesical tumor growth with similar efficacy to mitomycin C [10]. Sterilization through radiation could keep EGCG in a stable form and of benefit in treating superficial bladder cancer [11]. A recent phase II trial of polyphenol consisted primarily of EGCG administered in patients prior to bladder cancer surgery resulted in definite tissue accumulation and biologic activity of polyphenol [12]. The evidence suggested EGCG as a potential therapeutic agent for prevention of tumor implantation in bladder cancer.
To investigate the role and novel therapeutic targets of EGCG on bladder urothelial carcinoma, we conducted this study to explore the effect of EGCG on altered gene expression and microRNA expression profiles of bladder cancer cells using next generation sequencing (NGS), and further investigate functionally enriched biological themes using different bioinformatics database analyses.

For NGS, library preparation and deep sequencing were carried out at Welgene Biotechnology Company (Taipei, Taiwan) following the protocol of Illumina (San Diego, CA, USA). In brief, sequencing for transcriptome was determined using sequencing-by-synthesis technology, and the sequencing data was generated by Welgene’s pipeline based on Illumina’s base calling program bcl2fastq v2.2.0. Trimmomatic version 0.36 was used for adaptor clipping and sequence quality trimming [13]. The read alignment was accomplished using HISAT2 to map sequencing reads to genomes [14], followed by differential expression analysis using Cuffdiff (Cufflinks version 2.2.1) [15] with genome bias detection/correction and Welgene in-house programs. The genes with low expression levels (<0.3 fragment per kilobase of transcript per million mapped reads (FPKM)) in both EGCG-treated and control BFTC-905 cells were excluded. The p-values were calculated by Cuffdiff with non-grouped sample using “blind mode”, where all samples were determined as replicates of a single global “condition” to build one model for statistical test [15]. Genes with p-values < 0.05 and fold-change >2.0 were determined as significantly differentially expressed. For small RNA sequencing, samples were prepared using Illumina sample preparation kit, following the TruSeq Small RNA Sample Preparation Guide. Reverse transcription and PCR amplification was performed after 3′ and 5′ adaptor ligation to RNA. The amplified cDNA constructs were size-fractionated and purified using 6% polyacrylamide gel electrophoresis. The bands containing 18–40 nucleotide RNA fragments were extracted and sequenced on an Illumina instrument with 75 base pair single-end reads. Sequencing data was processed with the Illumina software and trimmed for qualified reads using Trimmomatic version 0.36 [13]. The qualified reads were analyzed using miRDeep2 to clip the 3′ adapter sequence and eliminate reads shorter than 18 nucleotides [16]. The reads were then aligned to the human genome from the University of California, Santa Cruz (UCSC). Only reads that mapped perfectly to the genome five or less times were used for miRNA detection. The miRNAs with low expression levels (<1 normalized read per million (RPM)) in both EGCG-treated and control BFTC-905 cells were excluded. Those miRNAs with fold-change >2.0 were determined as differentially expressed.

To determine the enriched biological functions and interaction networks of the differentially expressed genes, several bioinformatics databases were used, including Ingenuity Pathway Analysis (IPA) [17], OmicsNet [18], and Database for Annotation, Visualization and Integrated Discovery (DAVID) [19]. In addition, to predict miRNA targets, miRmap target prediction database (version 1.1) [20] was used, and those candidate miRNA–mRNA interactions were validated in two other target prediction databases, TargetScan [21] and miRDB [22].

This section may be divided by subheadings. It should provide a concise and precise description of the experimental results, their interpretation as well as the experimental conclusions that can be drawn.

The miRNA expression profile of EGCG-treated and control bladder TCC cells were simultaneously performed using NGS. Dysregulated miRNAs were selected under the criteria of at least two-fold change in EGCG treated cells and normalized read counts of more than 1 RPM. There were 59 up-regulated and 44 down-regulated miRNAs identified in EGCG-treated bladder TCC cells, and the heatmap of these 103 dysregulated miRNAs were displayed in the left panel of Figure 2. The putative targets of these dysregulated miRNAs were obtained from miRmap database, selecting those with miRmap scores ≥97.0 indicating high repression strength. The putative targets were then matched to significantly differentially expressed genes identified in the previous section. The intersection Venn diagram was shown in the middle panel of Figure 2, where 22 candidate genes with potential miRNA interactions were identified. A list of the 22 candidate genes along with their expression levels were shown in Table 1.

3.3. The 22 Candidate Genes were Involved in NAD Biosynthesis, Inflammatory Response and Cancer

To understand the involvement of the 22 candidate genes with potential miRNA interactions in EGCG-treated bladder TCC cells, these genes were uploaded to IPA software for core analysis. The top five canonical pathways were mainly related to nicotinamide adenine dinucleotide (NAD) biosynthesis; additionally, most of these genes were related to diseases and disorders in inflammatory response and cancer (Table 2). The network analysis grouped these genes into three sub-networks, where 20 genes were related to nervous system function and inflammatory response, as listed in Table 3. The activation z-score was −0.128 for inflammatory response, which indicated inhibited inflammatory response among these candidate genes.
To investigate the interaction network among these candidate genes, the OmicsNet was used for protein–protein interaction (PPI) network generation using both InnateDB and STRING databases. The major PPI subnetwork from InnateDB was displayed in Figure 3, in which module-based explorer using WalkTrap algorithm identified ARRB1, MGAT5B, RBPMS, and NDUFS1 as central hubs of major subnetworks. Similarly, ARRB1 and NDUFS1 were also identified as central hubs among the two major PPI subnetworks from the STRING database (Figure 4). In addition, metabolite-protein interaction data was also investigated on all KEGG reactions in the OmicsNet. Among the interaction network, NDUFS1, KMO, and NMNAT2 were found closely associated with NAD related metabolites, as shown in Figure 5.

To investigate functionally enriched biological themes among the 108 differentially expressed genes in EGCG-treated bladder TCC cells, IPA and DAVID databases were used. The IPA result identified NAD biosynthesis (p = 1.77 × 10−3) and Hippo signaling (p = 6.74 × 10−3) being the top canonical pathways, and cancer the top disease involved in these dysregulated genes (Table 4). In the DAVID database analysis, the significantly enriched biological processes were also observed to be associated with oxidation-reduction process and NFκB signaling, and borderline significance in NAD metabolic process and metabolic pathways (Table 5).

In summary, 108 differentially expressed genes and 22 candidate genes with potential miRNA interactions in EGCG-treated bladder TCC cells were identified. These genes were mainly involved in NAD biogenesis, inflammatory response, and oxidation-reduction metabolism. Moreover, several miRNA–mRNA interactions that were potentially altered with EGCG treatment were identified. These findings may provide insights into novel therapeutic targets and underlying mechanisms of action of EGCG treatment in bladder cancer.

The authors gratefully acknowledge the assistance from the Center for Research and Development of Kaohsiung Medical University (Kaohsiung, Taiwan). 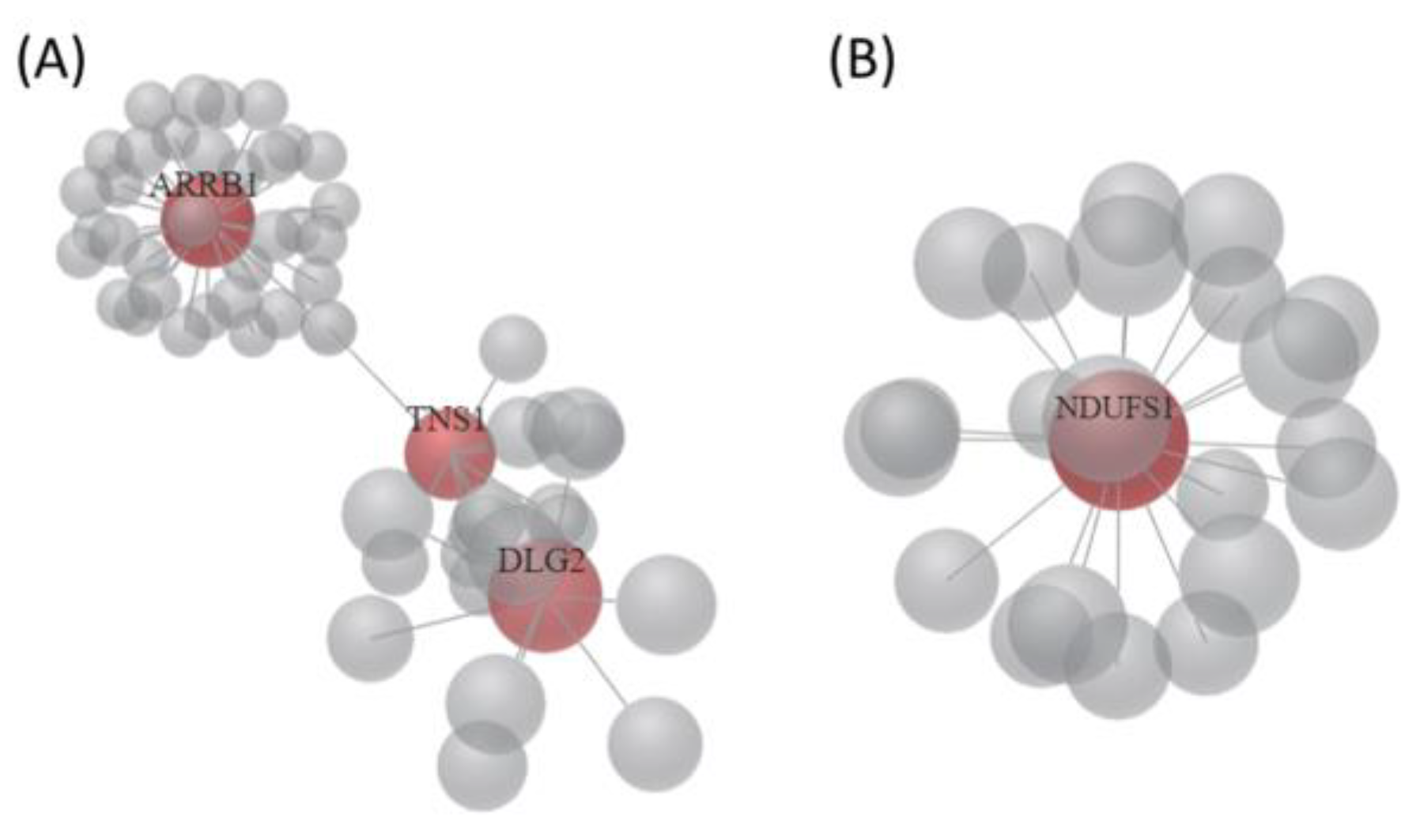