The Role of Cardiovascular and Metabolic Comorbidities in the Link between Atrial Fibrillation and Cognitive Impairment: An Appraisal of Current Scientific Evidence
Previous Article in Journal

Background and objectives: Ischemic and idiopathic heart failure are characterized by reactive cardiac fibrosis and impaired vasculogenesis involving pro-angiogenic factors such as angiogenin, angiopoietin-1 (Ang-1), and angiopoietin-2 (Ang-2), as demonstrated in experimental models of heart failure. However, differences in the molecular pathways between these cardiomyopathies are still unclear. In this short communication, we evaluate and compare the expression of pro-angiogenic molecules in the heart tissue of patients with advanced chronic heart failure (CHF) of ischemic vs. nonischemic etiology. Materials and Methods: We obtained heart tissue at transplantation from left ventricular walls of 16 explanted native hearts affected by either ischemic (ICM) or nonischemic dilated cardiomyopathy (NIDCM). Tissue samples were examined using immunohistochemistry for angiogenic molecules. Results: We found immunopositivity (I-pos) for angiopoietin-1 mainly in the cardiomyocytes, while we observed I-pos for Ang-2 and Tie-2 receptor mainly in endothelial cells. Expression of Procollagen-I (PICP), angiogenin, Ang-1, and Tie-2 receptor was similar in ICM and NIDCM. In contrast, endothelial immunopositivity for Ang-2 was higher in ICM samples than NIDCM (p = 0.03). Conclusions: In our series of CHF heart samples, distribution of Ang-1 and angiogenin was higher in cardiomyocytes while that of Ang-2 was higher in endothelial cells; moreover, Ang-2 expression was higher in ICS than NIDCM. Despite the small series examined, these findings suggest different patterns of angiogenic stimulation in ICM and NIDCM, or at least a more altered endothelial integrity in ICD. Our data may contribute to a better understanding of the angiogenesis signaling pathways in CHF. Further studies should investigate differences in the biochemical processes leading to heart failure. View Full-Text
Keywords: heart failure; angiogenesis; angiopoietin-1; angiopoietin-2; cardiac fibrosis heart failure; angiogenesis; angiopoietin-1; angiopoietin-2; cardiac fibrosis
►▼ Show Figures 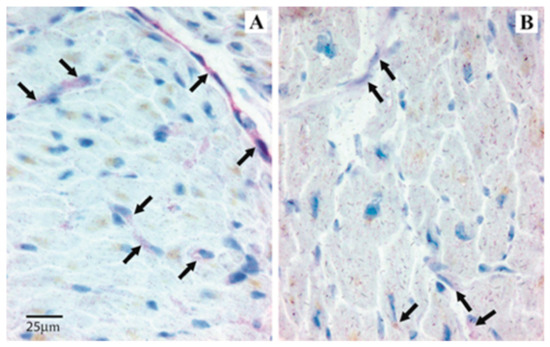