Could the Combination of Two Non-Psychotropic Cannabinoids Counteract Neuroinflammation? Effectiveness of Cannabidiol Associated with Cannabigerol

Neuroinflammation is a key pathological event associated with many neurodegenerative diseases, including amyotrophic lateral sclerosis (ALS). Inflammation triggered by microglia plays an important role in promoting neurodegeneration by inducing the expression of pro-inflammatory factors [1].
ALS is a progressive neurodegenerative disease caused by the selective death of alpha motor neurons. Many events, including oxidative stress, neuronal inflammation, mitochondrial dysfunction, RNA processing errors, and protein misfolding, are implicated in the pathogenesis of ALS [2,3].
NSC-34 is a murine hybridoma cell line produced by the hybridization of neuroblastoma cells with motor neuron-enriched spinal cord cells [4]. All-trans retinoic acid (RA), in combination with serum deprivation, promotes neuronal differentiation in NSC-34, characterized by morphological progression (such as the neurite outgrowth) and functional molecular changes that are motorneuron-specific [5]. It is a well-validated in vitro model to investigate the physiopathological mechanisms associated with neurodegeneration in ALS [6].
Lipopolysaccharides (LPSs) induces the expression of inflammatory mediators involved in the neurodegenerative process and is a valid model usually used to reproduce neuroinflammation associated with neurodegeneration [7].
In recent years, many in vitro and in vivo studies have demonstrated the therapeutic potential of cannabinoids for the treatment of neuroinflammatory disorders due to their antioxidant and anti-inflammatory properties [8].
Cannabis sativa is a plant of the Cannabaceae family widely utilized for its psychoactive and therapeutic effects [9]. To date, more than 120 cannabinoids have been isolated and characterized. The most investigated cannabinoids are the delta-9-tetrahydrocannabinol (Δ9-THC), cannabidiol (CBD), cannabigerol (CBG), cannabivarin (CBV), and cannabidivarin (CBDV). Δ9-THC is the predominant psychotropic component of the plant. In the last years, CBG and CBD are the two non-psychoactive cannabinoids more studied due to their anti-inflammatory and antioxidant properties [10,11]. The anti-inflammatory and antioxidant effects of CBD on movement disorders have also been proved in several preclinical and clinical studies. However, the beneficial effects in many of these studies have been observed when CBD is combined with Δ9-THC [12,13]. On the other hand, no study of the combination of no-psychoactive cannabinoids is available. CBG and CBD exert their activity at multiple molecular sites [8]. They may exert their actions by binding class A G-protein-coupled receptors (GPCRs); cannabinoid receptor type 1 (CB1), the most abundant neuromodulatory receptor in the brain; and cannabinoid receptor type 2 (CB2), localized in the immune system among other tissue districts [14]. Cannabinoids could also activate the transient receptor potential vanilloid channel-1 (TRPV1), and serotonin receptor 5-HT1A, or modulate G protein-coupled receptors (GPCRs) [15]. Their effects may also include interactions with transcription factors, such as the nuclear factor (erythroid-derived)-like 2 (Nrf-2), the nuclear factor kappa B (NF-κB) or nuclear receptors of the peroxisome proliferator-activated receptor (PPAR) family [16,17].
CBG is a partial agonist of CB1 and CB2 receptors. Additionally, it is an α2-adrenoceptor agonist and 5HT1A receptor antagonist. It can activate TRPV1, TRPV2, and transient receptor potential ankyrin 1 (TRPA1) and antagonize the transient receptor potential cation channel subfamily M (melastatin) member 8 (TRPM8) [18].
CBD has a low affinity for both cannabinoid CB1 and CB2 receptors and behaves as a non-competitive negative allosteric modulator of CB1 receptors [19].
CBG and CBD have demonstrated to exert neuroprotection by activation of the nuclear receptors of PPAR-γ by a mechanism cannabinoid (CB)-receptors independent [20,21].
Following the above-mentioned data, in this study, we wanted to evaluate the ability of two non-psychoactive cannabinoids, CBG administered alone and in association with CBD, to counteract neuroinflammation induced on NSC-34 differentiated motoneurons upon exposure to LPS-stimulated RAW 264.7 cell-conditioned medium.

2.1. Extraction and Isolation of CBG and CBD

Cannabis sativa was provided by greenhouse cultivation at CREA-CIN, Rovigo (Italy) in accordance with their legal status (authorization SP/106 23/05/2013 of the Ministry of Health, Rome, Italy). CBG and CBD were isolated and purified (with greater than 99% purity) according to a standardized protocol to avoid any trace of THC [22,23].

RAW 264.7, a murine macrophage cell line obtained from the American Type Culture Collection (ATCC) was cultured in DMEM-high glucose medium (Sigma-Aldrich; Merck KGaA, Darmstadt, Germany) supplemented with 10% fetal bovine serum (FBS; Sigma-Aldrich; Merck KGaA) and 1% penicillin/streptomycin, in atmosphere of 5% CO2 at 37 °C.
For the production of the LPS-stimulated medium, cells were growth until 80% confluence and incubated with 1 µg/mL LPS from Escherichia coli 0111: B4 (Sigma-Aldrich; Merck KGaA) for 24 h. Untreated cells were used as control. After the treatment, the culture medium was collected to carry out experiments with NSC-34 differentiated cells [24].

After cell differentiation, the culture medium of NSC-34 cells was replaced with RA-free medium and treated with different concentrations of CBG (2.5 and 5 µM) and/or CBD (2.5 and 5 µM) alone and in 1:1 ratio combination and with vehicle (DMSO < 0.1%) for 24 h. After 24 h, the medium was replaced with a culture medium from LPS-stimulated Raw264.7 cells and the cannabinoid treatments restored. The cells were incubated for a further 24 h. As controls, NSC-34 cells were incubated with the medium of unstimulated RAW 264.7 macrophages.

An MTT assay was preliminarily performed in order to evaluate cell viability after treatment with various concentrations of CBG and CBD, both alone and in association for 48 h. Subsequently, we investigated the effect of exogenously applying the concentrations to the LPS-stimulated medium on the survival of NSC-34 differentiated cells and the effect of the pre-treatment with cannabinoids on counteracting the reduction in cell viability induced by LPS-stimulated medium exposure.
The NSC-34 cells were seeded into 96-well plates with 5 × 103 cells per well and maintained at 37 °C in 5% CO2 in a proliferation medium. After 24 h, the culture medium was replaced with the differentiation medium and 1 µM of RA for 5 days. After differentiation, the cells were pre-treated with cannabinoids 24 h before incubating with the LPS-stimulated medium.
After the stimulus, 10 µL of methyl tetrazolium (MTT; 3-(4, 5-dimethylthiazol-2-yl)-2, 5-diphenyltetrazolium bromide) solution (5 mg/mL) was added to each well and cells were incubated for another 4 h. The formazan crystals were dissolved in 100 µL of the solubilization solution (0.1 N HCl in isopropanol) and the absorbance was measured at 490 nm.
Cells treated with vehicle (DMSO) and without LPS were included as controls. The experiments were performed in triplicates and repeated three independent times.

Nsc-34 motoneurons were seeded and differentiated on coverslips (12 mm, Thermo Fisher Scientific, Waltham, MA, USA). At the end of treatment, cells were fixed with 4% paraformaldehyde for 30 min, washed in PBS, and incubated with 3% hydrogen peroxide to suppress endogenous peroxidase activity. After a wash, the coverslips were blocked with horse serum 0.1% Triton X-100 for 20 min and incubated overnight at 4 °C with the following primary antibodies:

NSC-34 cells, differentiated with RA 1 μM and low serum conditions (1%) for 5 days, showed neurite outgrowth (Figure 1b) compared to undifferentiated cells (Figure 1a).
In differentiated NSC-34 cells, we evaluated by an MTT assay the possible toxicity on motoneurons of serial concentrations (2.5, 5, 10, 20, 40, and 80 µM) of CBG and CBD alone and in association with a 1:1 ratio. No significant variation on cell viability was observed at all doses tested (Figure 2). We also analyzed NSC-34 cells incubated with dimethyl sulfoxide (DMSO < 0.1%), and no cytotoxicity was observed (data not shown) in line with our previous study reporting a normal morphological evaluation and nothing was altered in the transcriptome analysis of cells treated with DMSO [25]. All the experiments were performed in triplicates and repeated three independent times.

Motoneurons exposed to the LPS-stimulated medium showed significantly higher levels of tumor necrosis factor (TNF)-α compared to unstimulated cells (p < 0.0001) (Figure 3a). CBG pre-treatment at all doses tested, both alone and in association with CBD, was able to significantly downregulate TNF-α expression (p < 0.0001). On the contrary, the CBD result was less effective at 2.5 µM (Figure 3a).
As shown in Figure 4b, NSC-34 cells exposed for 24 h to the LPS-stimulated medium expressed significantly lower levels of IL10, the anti-inflammatory cytokine, compared to unstimulated cells. Only the pre-treatment of cells with CBG 5 µM + CBD 5 µM leads to an increase in basal levels of IL 10 cytokine (Figure 3b). CBD, both alone and in the association with CBG, was able to upregulate in a statistically significant manner the IL-37 expression compared to the LPS group (Figure 3c). CBG administered alone was not effective in restoring the anti-inflammatory cytokines but was able to enhance the anti-inflammatory effect of CBD.

3.3. Effect of CBG and CBD Association on IκBα Degradation, and NF-κB Activation

Western blot analysis displayed a significant inducible nitric oxide synthase (iNOS) increased expression in cells incubated with the LPS-stimulated medium compared to the control cells (Figure 5). CBG 2.5 µM slightly reduced iNOS expression compared to the LPS group, but the pre-treatment with the association of CBG 5 µM + CBD 5 µM was able to counteract the iNOS expression. Besides, CBD at 2.5 µM and 5 µM doses both alone and in association with CBG, resulted in Nrf2 nuclear translocation assessed by Western blot analysis (p < 0.0001) (Figure 6). CBG alone, instead, was unable to activate the Nrf2 nuclear translocation and in combination therapy, did not potentiate the antioxidant effect of CBD.

The LPS-stimulated medium induced neuroinflammation characterized by a loss of viability on differentiated motoneurons with apoptosis induction. Western blot showed a significant increase in Bax expression in the LPS group compared to the control group (Figure 7; p < 0.0001).
The pre-treatment with all doses of CBG alone and in association with CBD at a 2.5 µM dose reduced Bax expression levels (Figure 7). In addition, immunocytochemistry showed negative staining for Bcl-2 in the LPS group (Figure 8B) compared to the control group (Figure 8A). The pre-treatment with all doses of CBG induced the expression of Bcl-2 (Figure 8C,D). Instead, CBD given alone showed negative staining of Bcl-2 at the 2.5 µM dose (Figure 8E), being effective only at the 5 µM dose (Figure 8F). Both CBG–CBD combinations induced the expression of the Bcl-2 factor (Figure 8G,H) in a dose-dependent manner.

We also investigated the expression of PPARγ, assessed by immunocytochemistry. The pretreatment with CBG, both alone and in combination with CBD at all doses tested, induced PPARγ expression in motoneurons exposed to the LPS-stimulated medium (Figure 9). Only the activity of CBD is dose-dependent when administered alone (p < 0.0001).

In conclusion, in the present study, we confirmed the anti-inflammatory, antioxidant, and anti-apoptotic effects of CBG and CBD previously described. In particular, CBD administered alone was more effective at a 5 µM dose. CBG instead, given alone at 2.5 and 5 µM doses, was not effective but in co-administration with CBD, enhanced its anti-inflammatory properties. In particular, the combination treatment prevented the activation and translocation of NF-kB, thereby inhibiting the inflammatory response with a TNF-α reduction and the enhancement of anti-inflammatory cytokines IL-10 and IL-37. The benefits shared by CBD and CBG are enhanced when they are combined, making the overall compound more effective at the dose of 2.5 µM already. Moreover, the combinations were able to upregulate anti-apoptotic markers such as Bcl2.
Further evaluation of the effects of a CBG–CBD combination on in vivo preclinical models of ALS is therefore warranted. Our results provide preliminary support for the potential therapeutic application of CBG and CBD in motoneuron degenerative diseases.

The authors would like to thank Appendino Giovanni (Università del Piemonte Orientale “Amedeo Avogadro”, Novara, Italy) and Gianpaolo Grassi (CREA, Rovigo, Italy) for Extraction and Isolation of CBD and CBG. 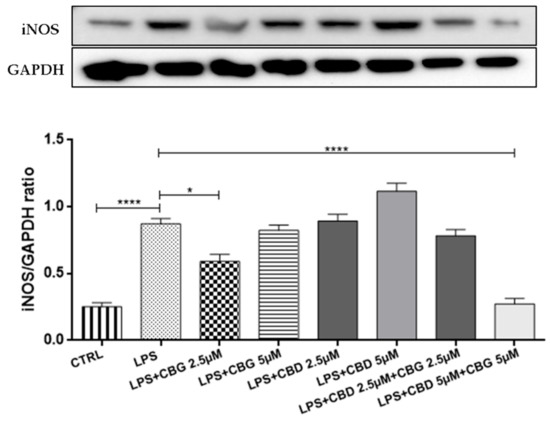 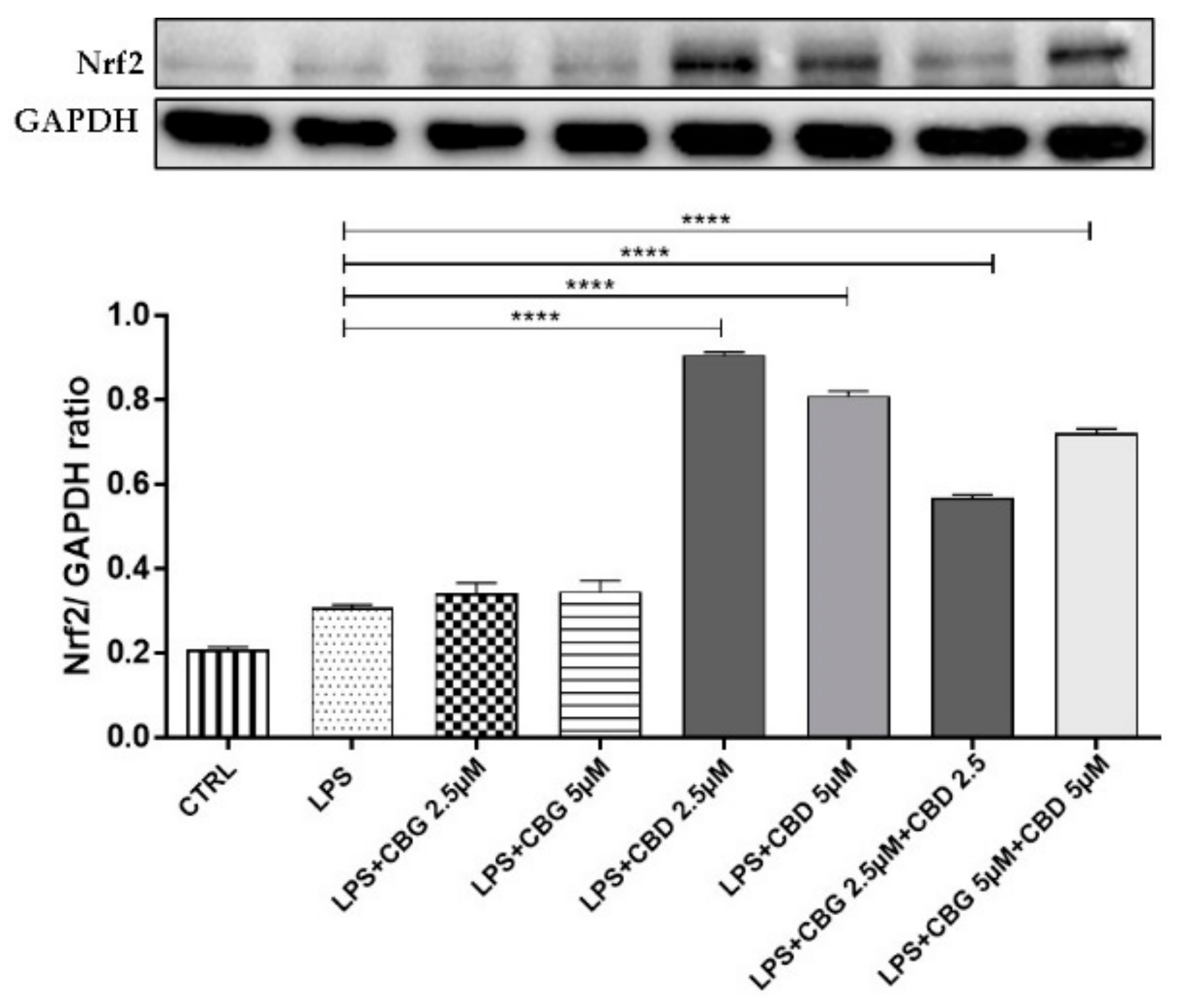 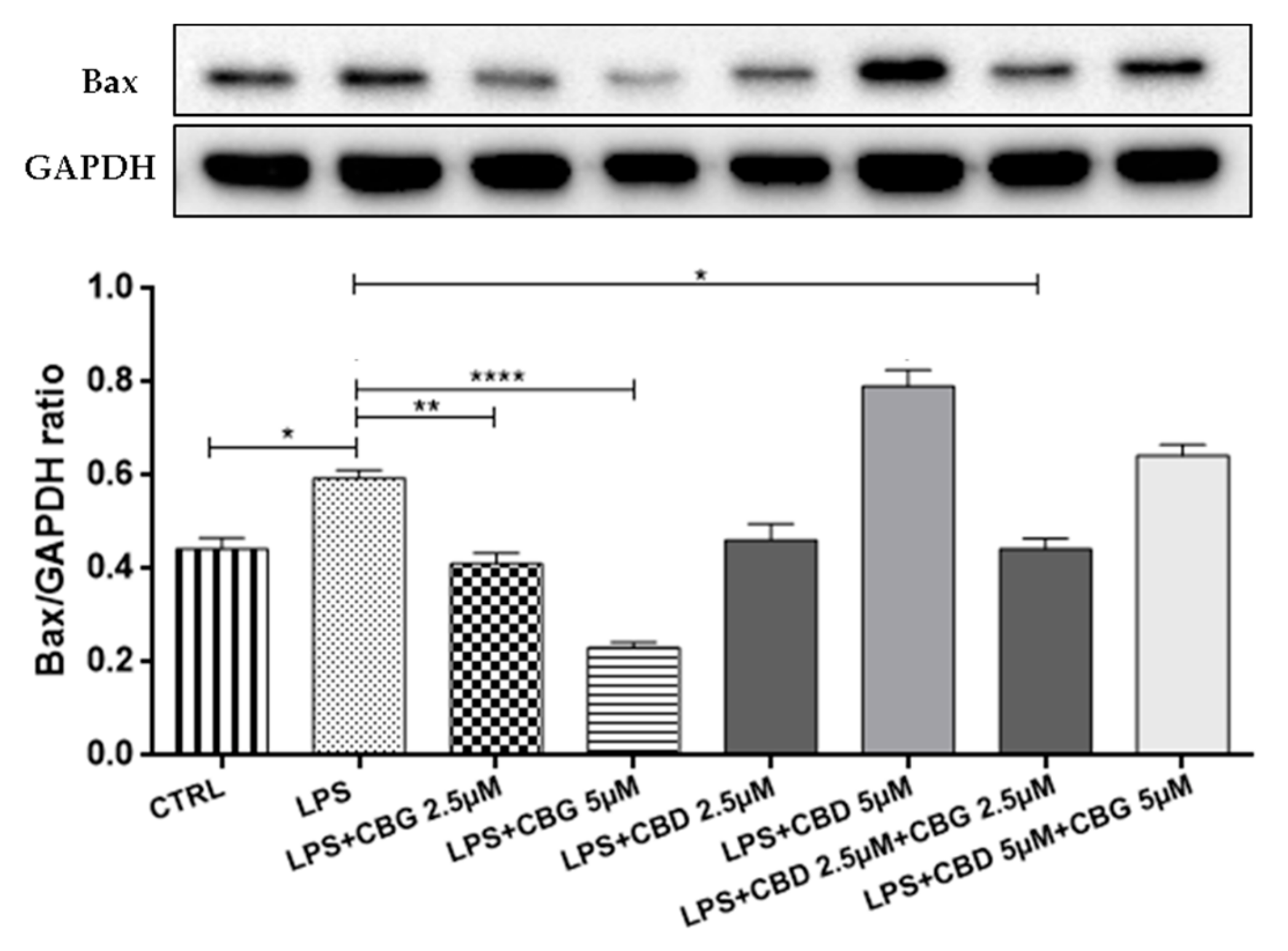 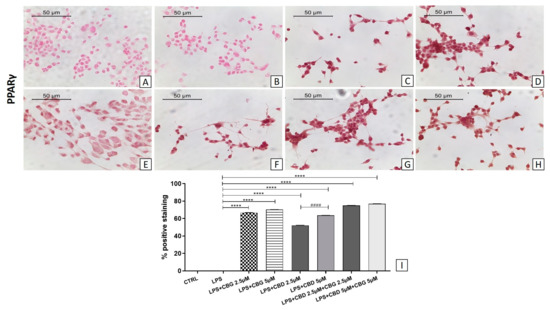 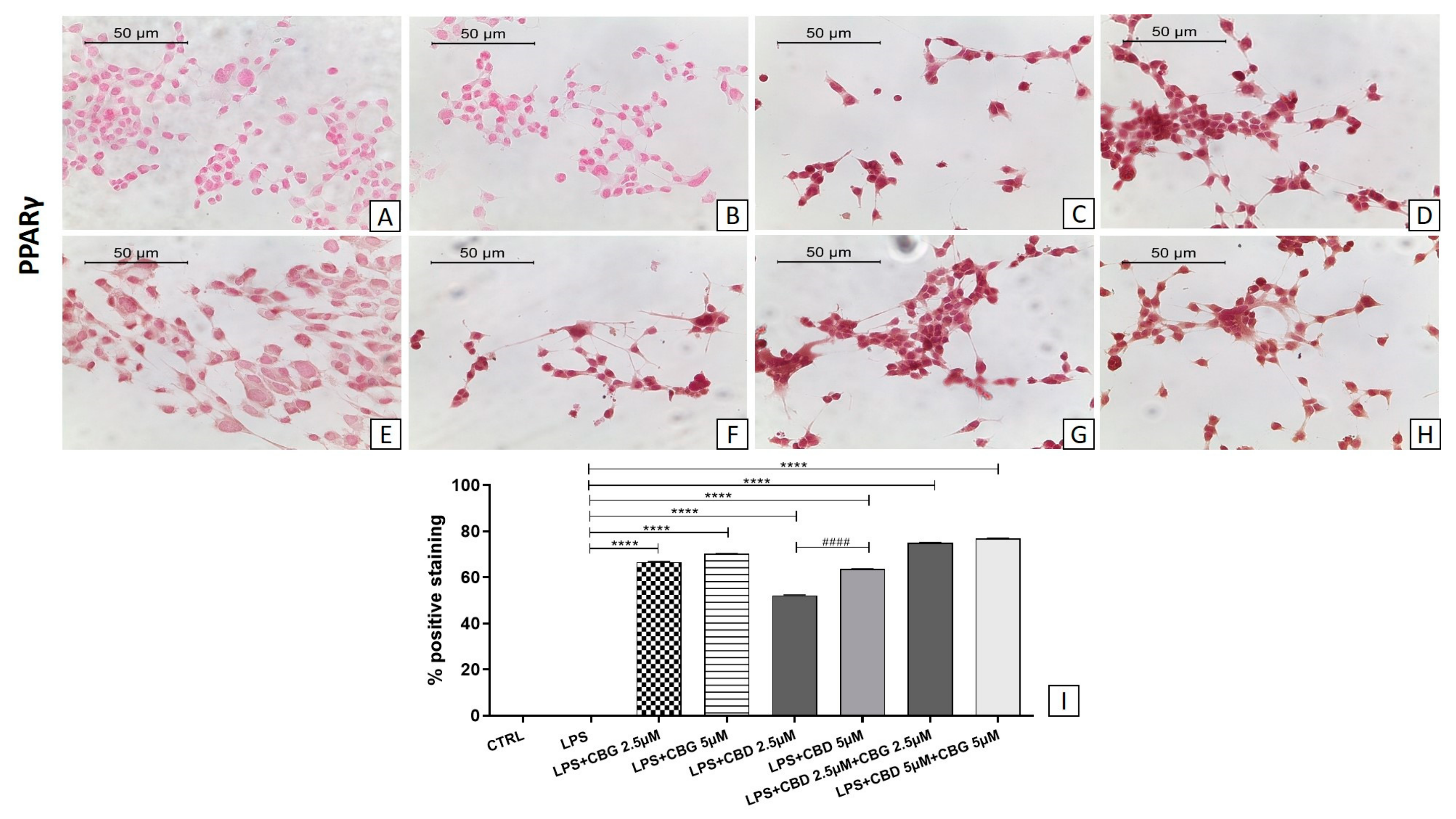