Background and Objectives: The mean platelet volume (MPV) represents a possible marker of platelet activation. There is an association between the platelet count (PC) and inflammation and platelet reactivity. We assessed the association between the MPV/PC ratio and circadian alterations in blood pressure (BP). Material and Methods: One hundred and twenty subjects in total, 80 hypertensive subjects and 40 healthy subjects (controls), were enrolled in the study group. Twenty four hour ambulatory BP monitoring (ABPM) was applied to all subjects. According to ABPM results, the hypertensive subjects were separated into two groups, such as dippers (n = 40) and non-dippers (n = 40). In all subjects, the collection of venous peripheral blood samples was performed on admission for PC and MPV measurements. Results: The two groups exhibited similar clinical baseline characteristics. A significantly higher MPV/PC ratio was determined in non-dippers compared to that in dippers and normotensives. The higher MPV/PC ratio was observed in non-dippers in comparison with that in dippers and normotensives (0.046 ± 0.007 to 0.032 ± 0.004 fL/[109/L]; 0.046 ± 0.007 to 0.026 ± 0.004 fL/[109/L], p < 0.001, respectively). A receiver operating characteristic (ROC) curve analysis showed that the optimum cut-off value of the MPV/PC ratio for predicting non-dipping patterns in hypertensive patients was 0.036 (area under the curve [AUC]: 0.98, p < 0.001). According to the cut-off value, sensitivity and specificity were found to be 95% and 95%, respectively. Conclusions: The higher MPV/PC ratio was determined in non-dipper hypertensive subjects in comparison with that in dipper hypertensive subjects. An elevation of platelet activity and an increase in thrombus burden are reflected by an increase in the MPV/PC ratio. The MPV/PC ratio may underlie the increase in cardiovascular risk in non-dippers compared to that in dippers. View Full-Text
Keywords: mean platelet volume; non-dipper hypertension; platelets mean platelet volume; non-dipper hypertension; platelets
►▼ Show Figures 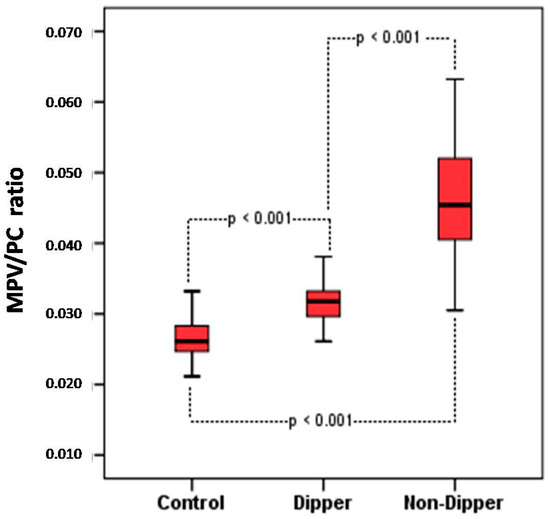