Associations of Cardiovascular and All-Cause Mortality with Metabolic Syndrome in Hemodialysis Patients: A Prospective Single-Center Study
Previous Article in Journal

The Impact of High-Flow Nasal Cannula on the Outcome of Immunocompromised Patients with Acute Respiratory Failure: A Systematic Review and Meta-Analysis

Diabetes mellitus is a high glycemic marker of metabolic disorders, which is a risk factor for cardiovascular disease [1]. In diabetic patients, hypertension and decreased renal function with hyperuricemic are major problems [2]. Hyperurecemia is characterized by high blood uric acid levels due to impaired uric acid metabolism, which puts individuals at risk of developing gout, cardiovascular diseases, hypertension, and metabolic syndrome [3,4]. Since diabetes is often complicated by hypertension and hyperuricemic, efficient therapeutic strategy against these two complications is very important in the treatment of diabetes. A study showed decreased serum uric acid level in patients with diabetes [5]. Hyperuricemia is a risk factor for the pathogenesis of vascular endothelial dysfunction, as well as the involvement of signaling mechanisms that influence the pathogenesis, and this association has been attributed to an inflammatory effect [6,7]. Antihyperuricemic drug can be further explored, and not only as antigout therapeutics [8]. Diabetic rats have intracardiac cytokine protein expression profiles that reflect weaker cardiac defenses compared with healthy rats [9].
Currently, hyperuricemia is treated by using natural ingredients from the Muntingia calabura L. plant, a flowering plant in the province of Aceh. It contains polyphenols, flavonoids, ascorbic acid, α tocopherols, and triterpenoids [10]. The leaves of the cherry plant (Muntingia calabura L.) are reported to have anti-inflammatory and antioxidant properties [11]. An antioxidant has the ability to decrease blood sugar level [12]. An antioxidant could reduce serum uric acid level [13]. Normally, the use of synthetic drugs cause kidney organ disorder; this study evaluates the effect of the natural ingredients of M. calabura on kidney histopatology. The antihyperuricemic potential of the ethanol extract of M. calabura L. stem bark from Aceh in diabetic rats has not yet been reported.
The aim of this study was to determine the potential of M. calabura L. stem bark extracts from Aceh, an antihyperuricemic, in diabetic rats and to compare the natural M. calabura L. stem bark extract with allopurinol.

M. calabura L. stem bark was collected in the mountainous region Aceh Besar of Aceh province, Indonesia. The plant was authenticated by the Department of Biology Education, Syiah Kuala University. The dried plant stem bark material (5 kg) was extracted three times with 96% ethanol at room temperature for 3 days. The solution was filtered and combined, and the organic solvent was removed under reduced pressure and evaporated at low temperature (40 °C) until a semi solid residue was obtained. The crude extract of each part was dried in a vacuum desiccator [14,15].

The crude extract was qualitatively tested for chemical constituents by performing various tests such as Mayer’s test for alkaloid, Salkowski’s test for steroids, aluminum chloride test for flavonoids, and ferric chloride test for phenolic compounds. These were identified by the characteristic color change using the standard tests [16,17,18].

The adult male Wistar rats (8 weeks old, weighing 180 g) were obtained from Animal Facilities, Veterinary Faculty, Syiah Kuala University, Banda Aceh (Aceh, Indonesia). Animals were used according to the suggested ethical guidelines for the care of laboratory animals, and the experimental protocol used in this study was approved by the Scientific and Ethical Committee of Syiah Kuala University (Ref: 009/KEPH-C/VII/2017, from 28 September 2017). The rats were acclimatized for at least 7 days. They were housed in an animal room with a temperature of 24–26 °C, humidity of 55%–60%, a regular 12 h/12 h light/dark cycle, and standard laboratory administration diet and water were provided ad libitum. General health status of the rats was monitored on alternate days. At the beginning of each experiment, the body weight of the animals ranged from 180 to 220 g. A completely randomized design was used for the experiment, which consisted of 6 treatment groups, each consisting of 4 rats, as follows: 1) NR, normal rat; 2) KN, diabetic rat (negative control); 3) KP, diabetic rats given allopurinol 10 mg/kg body weight; 4) EM150, diabetic rats given the test extract 150 mg/kg body weight/day; 5) EM300, diabetic rats given the test extract 300 mg/kg body weight/day; and 6) EM450, diabetic rats given the test extract 450 mg/kg body weight/day. Diabetes was induced in the animals by intra peritoneal injection of freshly prepared aloxan in a single dose of 150 mg/kg. One week after aloxan injection, fasting blood glucose was measured to verify the development of diabetes. The M. calabura L. stem bark extract was given for 45 days. Body weight, naso-anal length, and body mass index were measured as described by Ahmed et al. [19]. The crude ethanol extract from M. calabura L. stem bark at 150, 300, and 450 mg/kg were administered orally for 5 days to aloxan-induced diabetic rats, and serum uric acid levels were measured by Gluco check “Nesco”. Blood uric acid level was monitored with the Nesco Multi check (Gesunde Medical, Alamat: Jl. Raya Tajur—Bogor No.256, RT.04/RW.04, Sindangsari, Kec. Bogor Tim., Kota Bogor, Jawa Barat 16146 Indonesia).

For microscopic evaluation, tissues were fixed in a fixative (neutral buffered formalin) and embedded in paraffin, sectioned at 4 μm, and subsequently, stained with hematoxylin–eosin [20,21,22,23]. Sections were studied under a light microscope (DP12 Olympus, Syiah Kuala University, Banda Aceh Indonesia) at 40 magnifications. Slides of all the treated groups were studied and photographed. A minimum of 12 fields of each section was studied and approved by a pathologist who did not know the treatment given. Assessment of kidney damage is done based on the criteria, 0: Normal, 1: Lesions without necrosis, 2: Necrosis [24].

Data are expressed as the mean ± standard deviation (SD). Statistical analysis was performed by analysis of variance. Duncan’s multiple range test was performed to determine significant differences. The values of p < 0.05 were considered to be statistically significant.

Administration of M. calabura L. stem bark extract after 45 days of treatment had an effect on the body weight. Body weight of rats given the stem bark extract was the same as that of normal rats. However, the body weight in diabetic rats was lower when compared with other treatment groups. Administration of M. calabura L. stem bark extract had no effect on body mass index (Table 1).
The crude ethanol extract from Muntingia calabura L.stem bark at 150, 300, and 450 mg/kg and allopurinol at 10 mg/kg were administrated orally once a day. Values are displayed as mean ± SD. The superscript letters in the same row indicate statistically significant values (p < 0.05).

The ethanol extract from M. calabura L. stem bark at 300 mg/kg displayed the same inhibitory effect on serum uric acid levels as in rats that received allopurinol (Table 2).The presence of flavonoid and poliphenolic compounds in the M. calabura stem bark extract may have reduced uric acid in the rats. The polyphenol compound from M. calabura stem extract is thought to have an important role in lowering uric acid. Flavonoids have a role in inhibiting the activity of xanthine oxidase. Flavonoids can reduce uric acid by reducing the activity of xanthine oxidase in serum and increasing the concentration of uric acid in urine and binding free radicals as long as the purine changes into uric acid. Flavonoid can inhibit the performance of xanthine oxidase and xanthine dehydrogenase, so that it can inhibit uric acid synthesis [25,26]. In addition, extract of M calabura stem bark contain triterpenoid and it was reported that triterpenoid and triterpenoid saponin or riparsaponin could significantly inhibit xanthine oxidase activity so that uric acid decreases in the blood [27,28].
Chen-Yu et al. [27] reported that flavonoids in Davallia formosana extract can decrease uric acid levels by inhibition of xanthine oxidase enzyme. Specifically, plant phenolic compounds, such as phenolic acids and flavonoids, show strong antioxidant activity through scavenging free radical. In addition, both types of compounds inhibit xanthine oxidase activity [29,30,31]. Treatment with allopurinol can reduce serum uric acid at the rate of cardiovascular complications in patients with coronary heart disease, congestive heart failure, and dilated cardiomyopathy [29]. The crude ethanol extract of Siegesbeckia orientalis displayed antihyperuricemic activity, and the n-butanol-soluble fraction was found to be the most active portion of the extract. Further, in vivo studies of this fraction showed 31.4% decrease of serum uric acid levels [14]. Antihyperuricemic effect of novel thiadiazolopyrimidin-5-one analogs has been shown in oxonate-treated rats, which can be further explored not only as antigout therapeutics, but also in other systems where hyperuricemia is the driving cause of the disease [8]. The results indicated that activity of phytochemicals from D. formosana significantly inhibited xanthine oxidase activity in vitro and reduced serum uric acid levels in vivo. Activities of flavonoid glycosides could possibly be developed into potential hypouricemic agents [29].
The results of renal histopathology showed that administration of M. calabura L. stem bark extract improved the nucleus of proximal renal tubular cells and showed no specific damage to renal proximal tubular cells (Figure 1). In uncomplicated obese, insulin-resistant, and hypertensive patients, serum uric acid levels increase mainly as a consequence of impaired renal excretion, and increased production of uric acid occurs in parallel [32,33]. Body mass index (BMI) has an effect on diabetes. BMI levels were positively correlated with plasminogen-activator network (t-PA Ag), as well as plasminogen activator inhibitor-1 (PAI-1 Ag) concentration, and BMI can be associated with high plasma levels of PAI-1 Ag in Type 2 Diabetes [34].

It was concluded that M. calabura L. stem bark extract decreased uric acid levels, had no specific damage to renal proximal tubular cells, and has potential as antihyperuricemics in diabetic rats. The recommended dose to provide a significant effect on reducing the uric acid level in diabetic rats is 300 mg/kg body weight.

S.S. conceived and designed the research, analysis, and interpretation of the data, the manuscript, and its revision; agreed and gave final approval for the version to be submitted; and submitted the journal; M.S. conducted the experiment. All authors approved the manuscript.

The authors acknowledge the support of the Universitas Syiah Kuala. With the submissions of this manuscript we would like to undertake that the above-mentioned manuscript is original.

Authors are thankful to Hasanuddin, M.Si, the plant taxonomist of Department of Biology Education in Universitas Syiah Kuala, for identification and authentication of Muntingia calabura 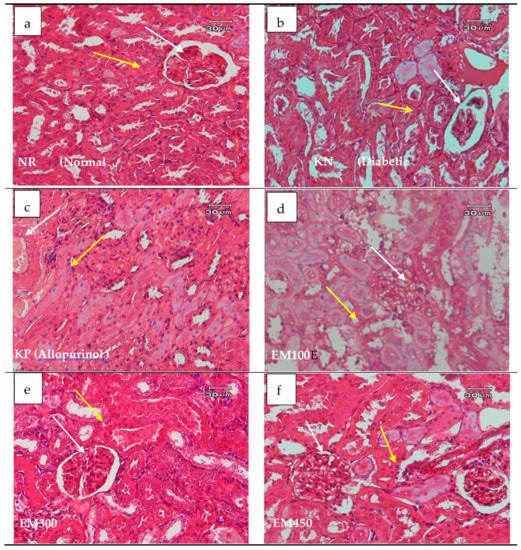 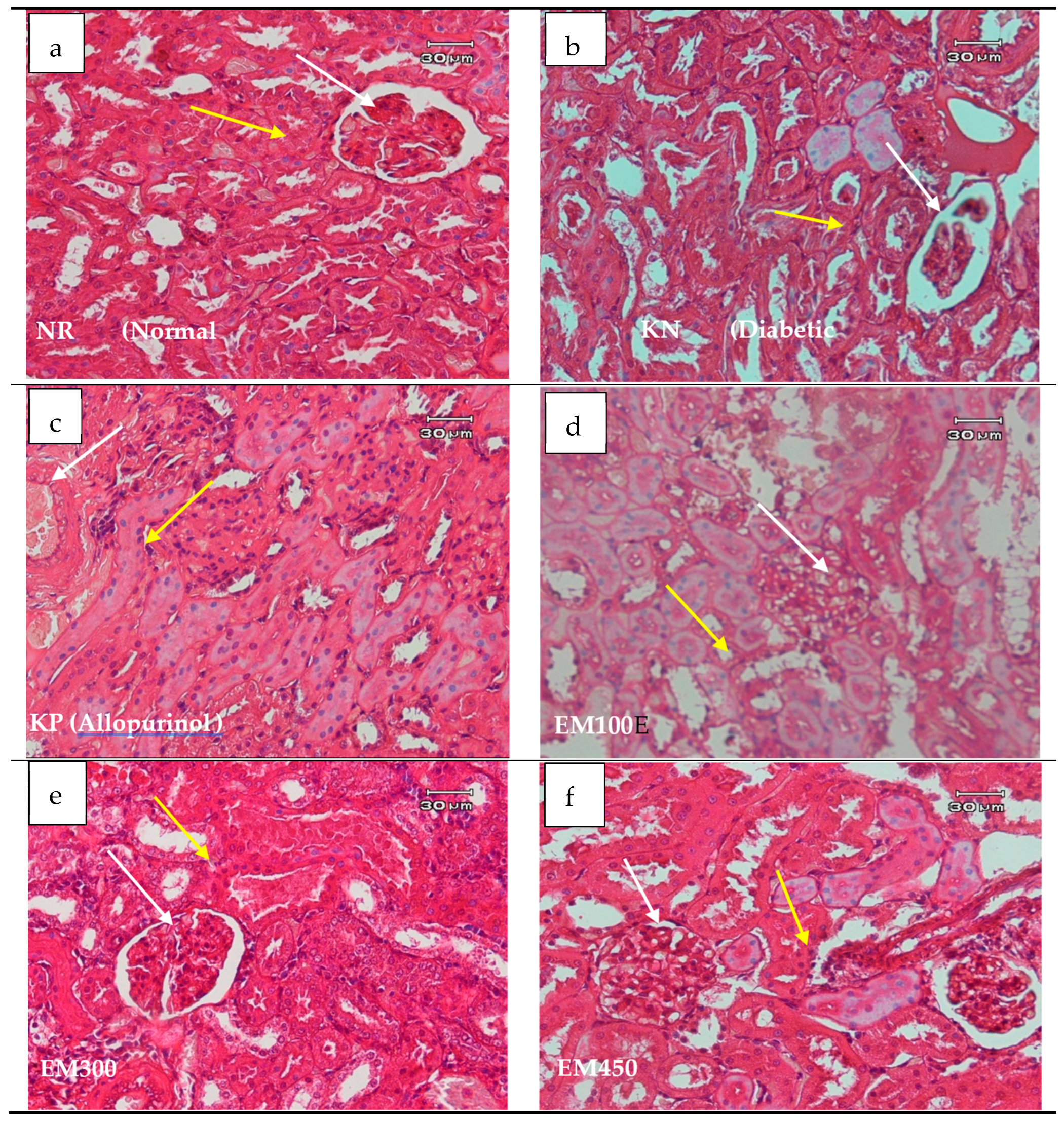 Table 4. Kidney damage category.
Table 4. Kidney damage category.
© 2019 by the authors. Licensee MDPI, Basel, Switzerland. This article is an open access article distributed under the terms and conditions of the Creative Commons Attribution (CC BY) license (http://creativecommons.org/licenses/by/4.0/).
We use cookies on our website to ensure you get the best experience. Read more about our cookies here.
Accept
We have just recently launched a new version of our website. Help us to further improve by taking part in this short 5 minute survey here. here.
Never show this again